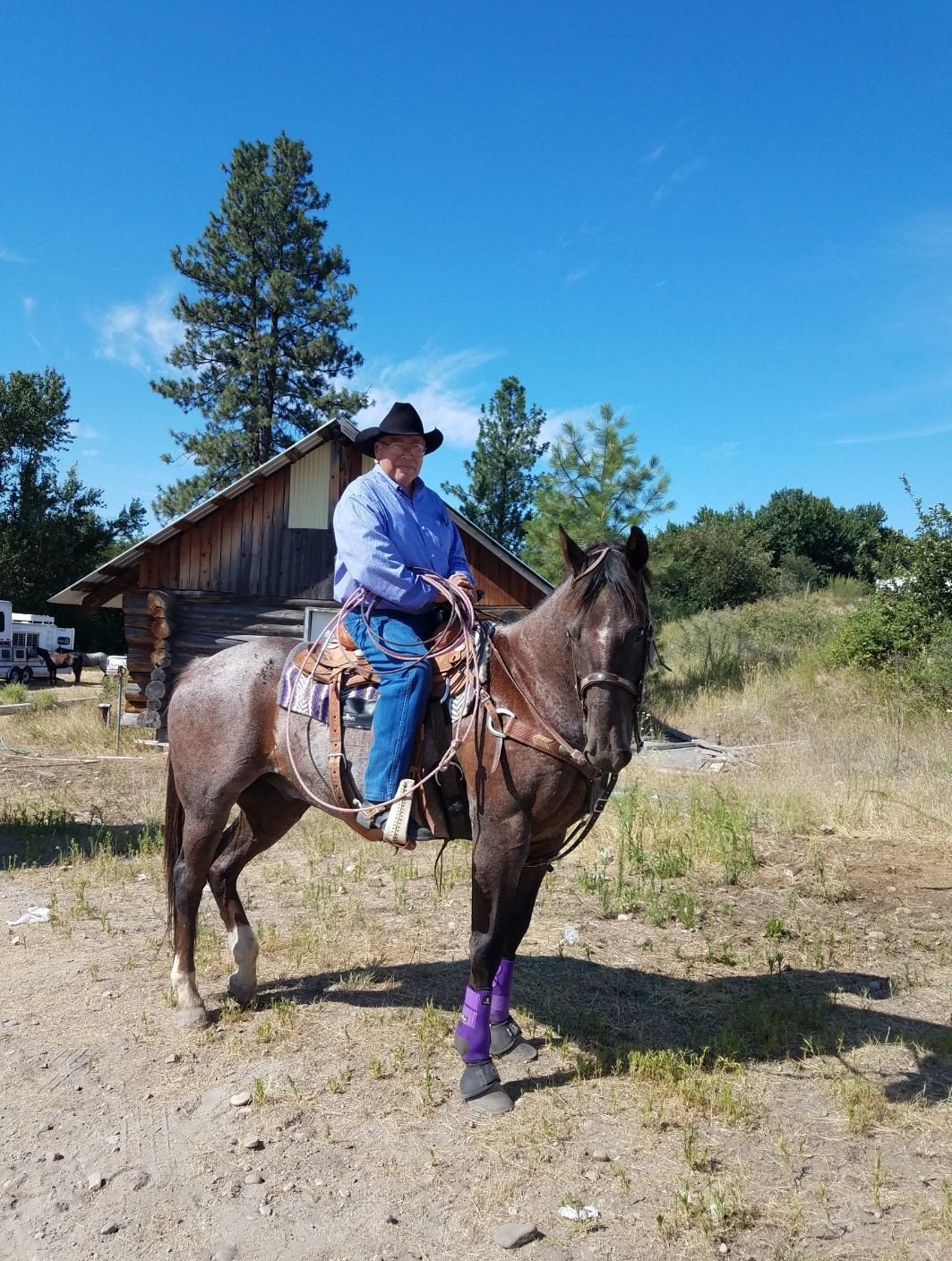 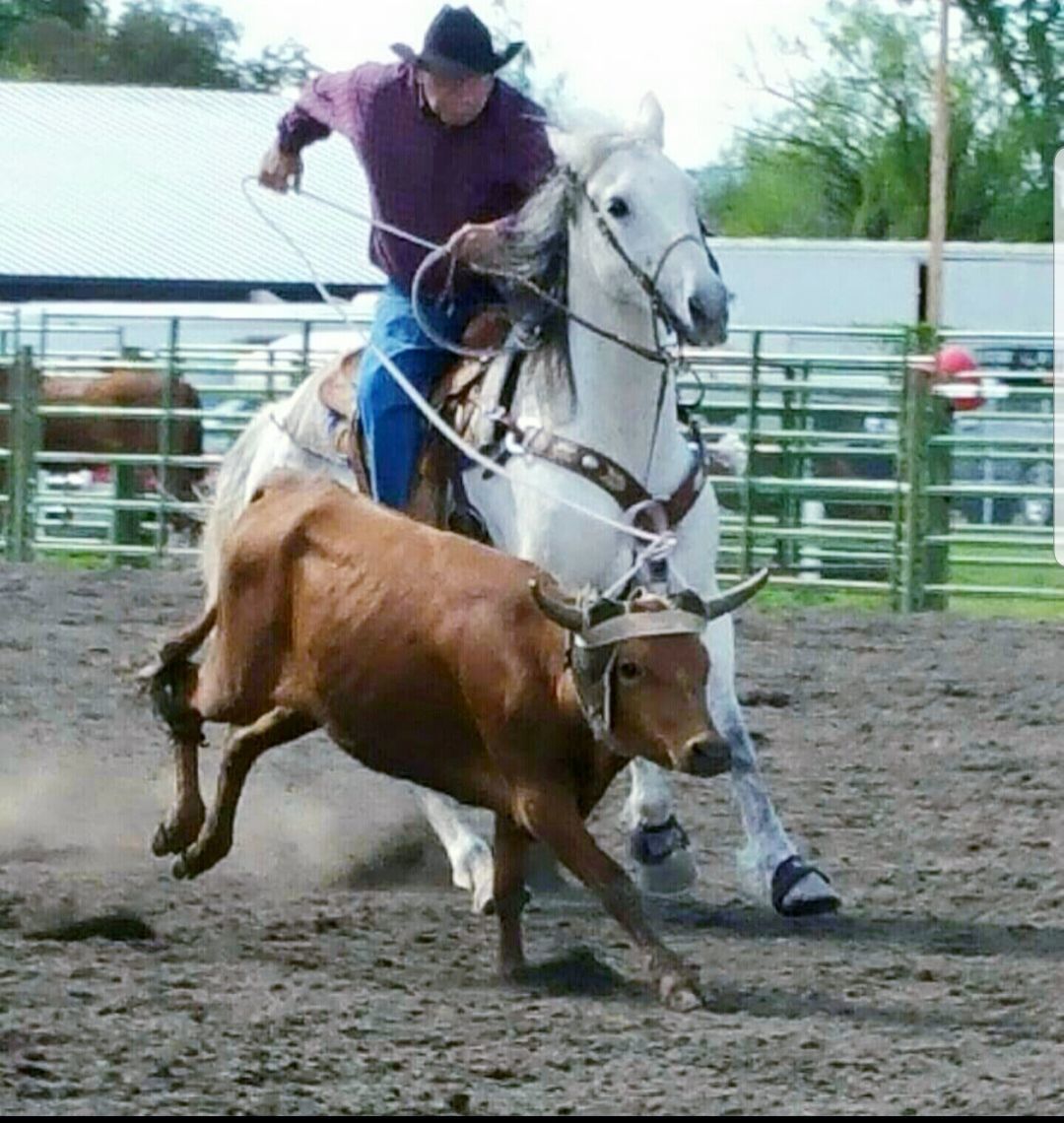 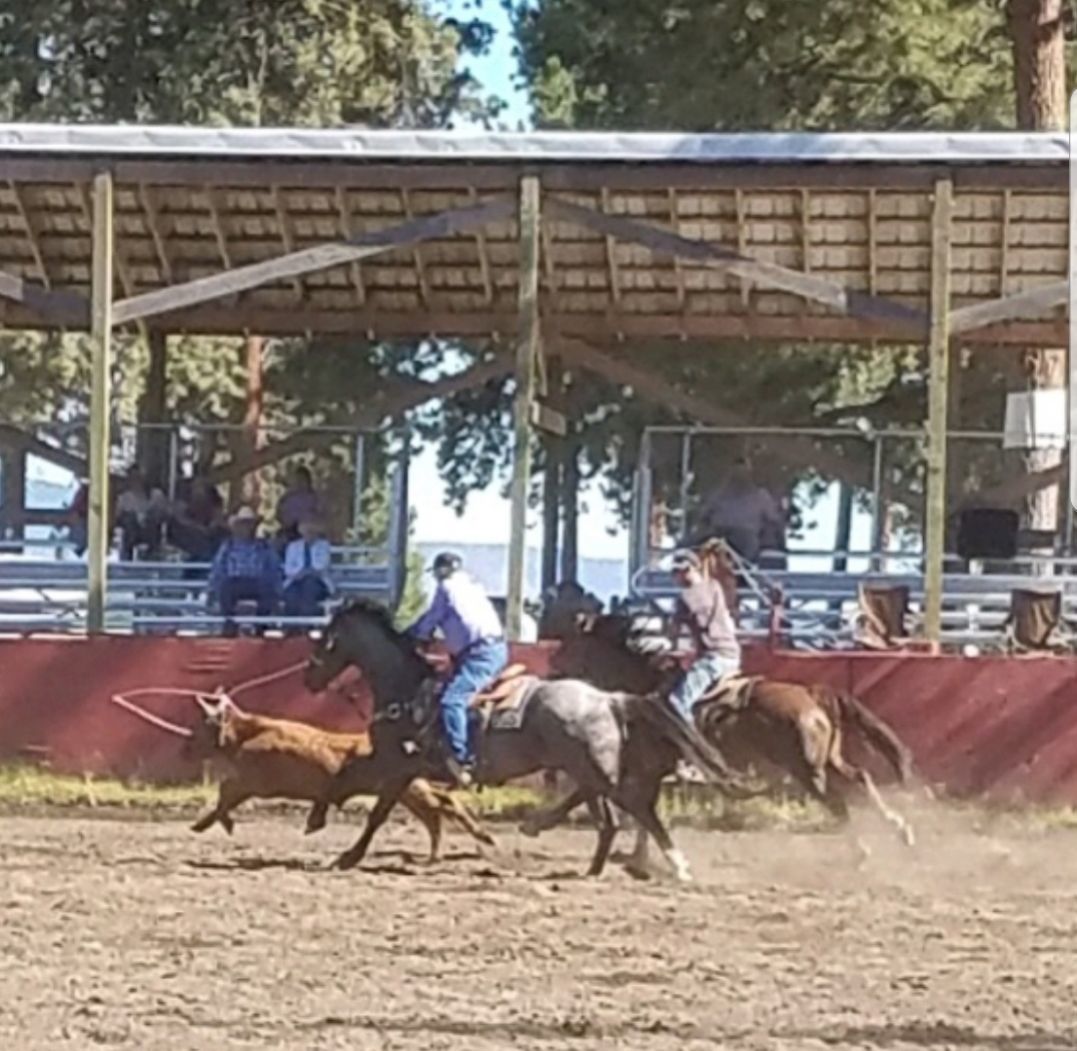 Herman Anderson and a partner roping a steer in Fort Klamath.

Herman Anderson and a partner roping a steer in Fort Klamath.

Herman Anderson started competing in rodeo with calf riding when he was about six years old.

“I only did it once,” he said, laughing. “After I got up with a mouth full of dirt, I decided roping was a lot more fun.”

Since then Anderson, a Klamath tribal member and a rancher in Beatty, competes in team roping and jackpots; and this year, he qualified for Senior Team Roping in the Indian National Finals Rodeo (INFR) in Las Vegas, which started earlier this week.

He begins the first round of team roping today, with a round tomorrow and another Saturday before a winner is announced.

This isn’t his first rodeo (if you will) or even his first INFR, which he has qualified for several times before.

Anderson grew up in a rodeo family.

His father, Miller Anderson, was a professional rodeo cowboy and even competed in the first national finals for the Professional Rodeo Cowboys Association (PRCA).

Miller was one of the first Native Americans to ever qualify for the team roping, Anderson said.

Miller and his brothers grew up on a ranch with lots of cattle – roping was just a part of the day-to-day business of ranching.

“We didn’t really concentrate on rodeo – it was more of an everyday deal,” Anderson said. “You’ve got the cattle to doctor and brand.”

“All kids on ranches can ride and rope even if they don’t go to rodeos, they can still ride and rope because that’s what they were taught growing up,” he continued.

“Klamath has always been a really big rodeo town,” Anderson said. “There’s lots of good cowboys that come out of Klamath – not just Indians but all kinds, non-Indians too. Klamath has historically produced some of the best ropers in the state.”

And Anderson’s family has been a part of rodeo in Klamath for a long time.

The Andersons started having rodeos in Beatty, which eventually evolved to the Indian rodeos in Klamath Falls, Anderson’s cousin Ferrando Herrara said. They even started the local Indian Rodeo Association in town.

Their aunt was the Queen of the Klamath Roundup back in the 20s or 30s; Anderson’s uncles and brothers competed in rodeos; his wife Debra used to compete (she also comes from a big rodeo family); even his ten-year-old nephew travels all over the country riding in rodeos.

And just like Anderson with his father, his own daughter Tammy Anderson grew up following her dad to rodeos. She’s even in Las Vegas now for the INFR.

“My roots run deep in this community for rodeo,” Anderson said. “Indian rodeo is like one big family.”

The INFR, then, will be like one big family gathering. Anderson has friends from all over the continent who will be in Las Vegas this week for the finals.

For Anderson though, it’s bigger than just competing.

“We like the powwows too,” he continued. “That taps into our heritage and lets us do our heritage because that’s fading out all over. We’re losing culture and traditions – younger people that don’t have the opportunity to do that.”

Herrara credits his cousin with maintaining part of that tradition.

“He’s still keeping it alive,” Herrara said. “There aren’t as many cowboys as there used to be, that want to be an Indian cowboy here around Klamath.”

Tod Cline, a long-time rodeo friend and occasional roping partner, said, “It’s something that gets in your blood, and I guess it is in your blood because you’re a Native.”

Cline – a Washo tribal member from Carson Valley, Nev. – and Anderson’s families have been connected for 75 years through rodeo. Cline’s grandparents and father were friends with Anderson’s parents.

While Cline won’t be in Las Vegas, many of Anderson’s rodeo friends will be, including a couple of other folks from Klamath.

Jerry Parrish is competing in the team roping, and Annie Quinn Barney has qualified in a couple of events, including the women’s breakaway and ladies barrel race.

She is a “veteran,” Anderson said — she has been to the INFR nine times — and one of only three women that have a chance for the women’s all-around.

And of course — as it goes in rodeo families — her grandpa and Anderson’s dad used to rope together back in their day.

Anderson’s partner for the INFR is Robert Bruised Head, from the Blood Reserve in Alberta, Canada. Bruised Head is also part of a huge rodeo family that’s known the Andersons since he and Anderson were kids.

“They used to come down here and go to rodeos and then my dad would go up there and they would go to all the big ones,” Anderson said. “We just kinda naturally grew up around each other.”

Anderson and Bruised Head have as good a chance of winning as anybody else, Cline said, calling Anderson consistent and a veteran. Meanwhile, Anderson said, as long as he can do his part he knows Bruised Head can finish the job.

Beyond rodeo, Herman has a reputation in his community for being a good, honest man.

“Herman’s well educated on political matters and he’s a fine representative of his people up there,” Cline said. “He’s a very fair man; he’s a good Christian. He doesn’t drink or smoke. He’s always there for his friends. That’s about the best way I can put it.”