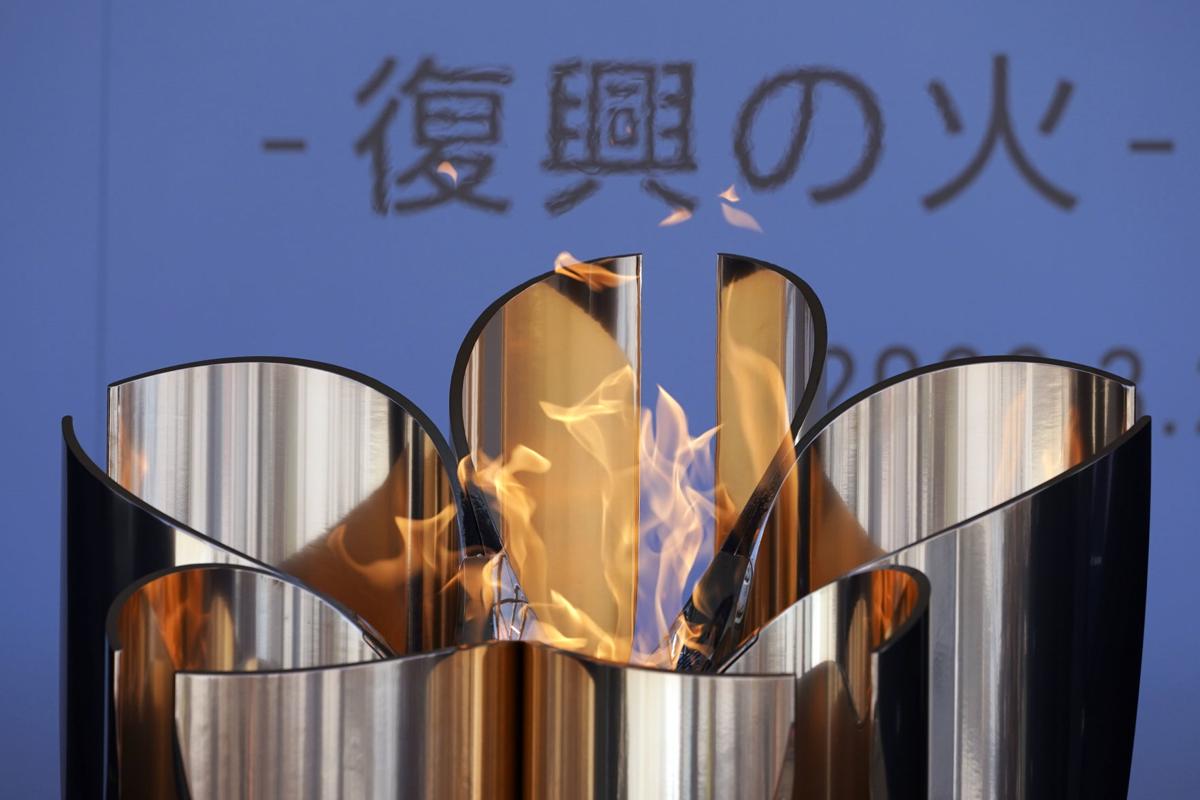 The Olympic Flame burns during the Olympic “Flame of Recovery” display ceremony in Iwaki, northern Japan Wednesday, March 25, 2020. IOC President Thomas Bach has agreed “100%” to a proposal of postponing the Tokyo Olympics for about one year until 2021 because of the coronavirus outbreak, Japanese Prime Minister Shinzo Abe said Tuesday. 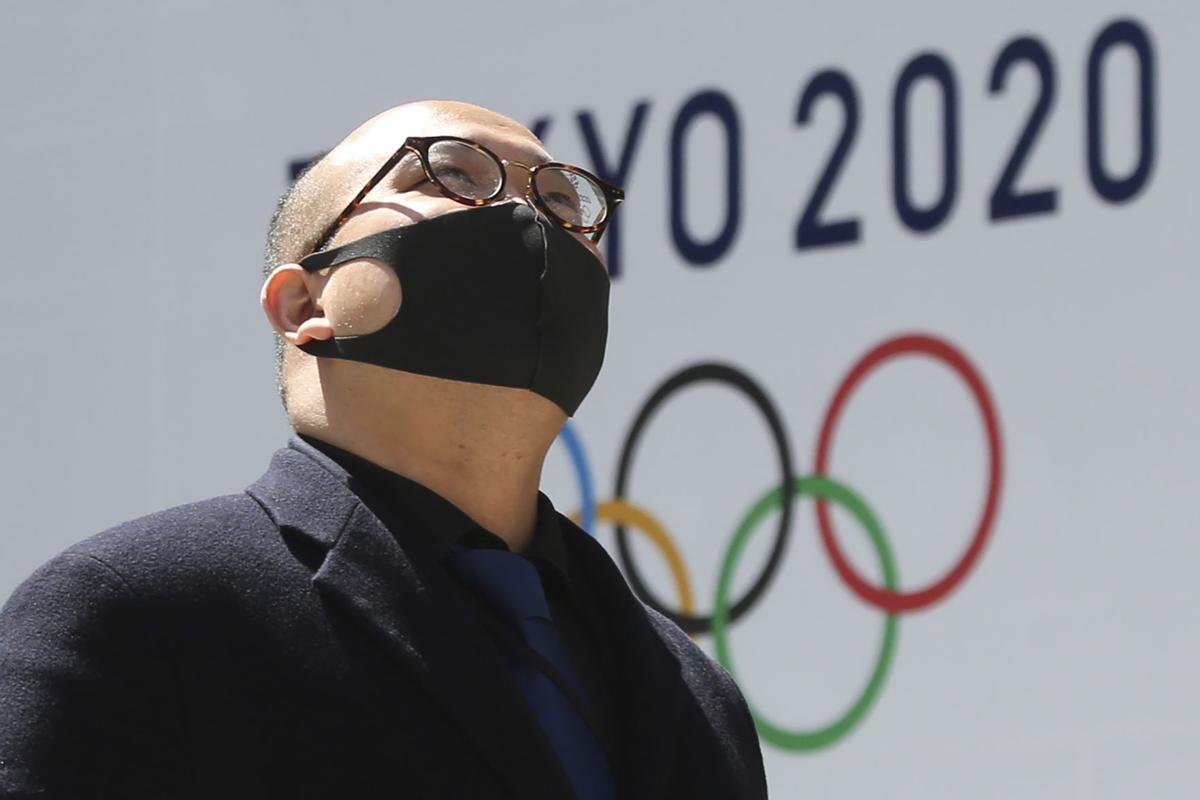 A man walks in front of a Tokyo Olympics logo at the Tokyo metropolitan government headquarters building in Tokyo, Wednesday, March 25, 2020. The Olympic torch relay was postponed Tuesday because the Tokyo Games themselves were pushed back to 2021.

The Olympic Flame burns during the Olympic “Flame of Recovery” display ceremony in Iwaki, northern Japan Wednesday, March 25, 2020. IOC President Thomas Bach has agreed “100%” to a proposal of postponing the Tokyo Olympics for about one year until 2021 because of the coronavirus outbreak, Japanese Prime Minister Shinzo Abe said Tuesday.

A man walks in front of a Tokyo Olympics logo at the Tokyo metropolitan government headquarters building in Tokyo, Wednesday, March 25, 2020. The Olympic torch relay was postponed Tuesday because the Tokyo Games themselves were pushed back to 2021.

Aside from figuring out how to maintain their health and fitness for an additional year, athletes like Ryan Crouser suddenly faced another concern when the Olympics were postponed until 2021.

They also have to make the money stretch that far.

Crouser still hopes to defend his shot put gold medal at the Tokyo Games next year, but now needs to get clarity about his sponsorship funding going into 2021 since his contract, and that of many other athletes, only goes through 2020.

“It’s a little bit tough because at the end of the day my contract, that’s my salary,” Crouser said. “That’s where I make the majority of my money.”

Right now, of course, it’s hard enough just to stay in shape amid a stay-at-home order because of the coronavirus pandemic, but the Oregon native, who is training in Arkansas, knows he has to use this time to his advantage in order to secure his future.

“It will hopefully put me in a position where I could throw far and prove myself going into re-signing a contract,” Crouser, who is sponsored by Nike, said. “Just to say I wasn’t really sitting on the couch this whole time.”

The sponsorship executives in the Olympic world can’t afford to slouch around either as they navigate the ramifications of an unprecedented delay to the Games caused by the virus.

Marketing plans for an Olympics that was meant to start in Tokyo July 24 are now in flux. Promotional material and ads that have already been shot may have to be discarded and remade at great costs, potentially with different athletes.

Then there is the delicate matter of renegotiating contracts, from all those individual endorsement deals to the top-tier Olympic sponsors who were only signed up through 2020.

“These games are called the Olympic Games Tokyo 2020,” International Olympic Committee president Thomas Bach said Wednesday, “therefore for me it’s a logical consequence that the sponsors ... keep their rights even if the Games are organized in ’21.”

For big conglomerates like General Electric and consumer goods firm Proctor and Gamble, it might seem like getting an additional year added to their association with the Olympics should be of great value.

That could be offset by the costs of the virus wiping out so many planned sponsorship events and commercials that would soon have been appearing across the world.

“I don’t think there’s a fair claim to say you should suddenly pay more,” former IOC marketing director Michael Payne, who now advises Olympic sponsors, said. “I think whatever is due to be paid in 2022 could be split 50-50 so half is in 2020 and the other half in 2021.”

Securing funding as an athlete is more complex, and uncertain.

Olympic hopefuls will be relying on the budgeted funding through 2020, from sponsors and domestic Olympic funding programs, and now need to finance the extended buildup to a games in 2021.

The lawyers will be busy poring over contracts.

“They’ll be rushing to check agreements on what’s covered and what’s not covered,” Simon Leaf, a lawyer in the London commercial team at Mishcon de Reya, said.

“Brands may have paid money and are not getting the return they expected. Likewise, athletes working with brands could be expecting to receive additional amounts this year but will not meet criteria for competing at the Olympics in the summer of 2020.”

Nike did not respond to a request for comment.

For Atlanta-based agent Paul Doyle, the year ahead is going to be busy. He estimates that 40 of the 50 athletes he represents need reworked deals heading into 2021.

“We could let this go on for another year. We’ll sign a paper that says we keep everything exactly as it is and just put it one year later,” Doyle said.

That could work particularly well for athletes in their 30s planning on Tokyo being their last Olympics.

For some, the delay might scupper their chances of competing at all, while others who were set to miss out this year may suddenly get a fresh opportunity.

“Do we try to take opportunities to prove in these last few meets that might happen in 2020, that they are worth re-signing for next year? That’s sort of the intention,” Doyle said.

“There are other athletes that might be in the opposite situation, they’ve been on fire through 2019 and their contract is up and they’re in a great position to negotiate now. It’s going to be interesting to see how everything unfolds.”

What is also problematic for track and field athletes is the lack of meets for the foreseeable future, with the postponement of the first three legs of the Diamond League denying them performance-related income from sponsors.

“Obviously, they (sponsors) are trying to be fair to athletes, but they’re also trying to run a business that’s incredibly strapped right now as well,” Doyle said.

“I hope everyone stands together and they realize: ‘Hey, these athletes are losing a lot of money by not being able to compete and not being able to earn bonuses. Let’s not take another hit on them.’ Hopefully the big companies absorb the loss more so than putting it on the athletes.”

Because those athletes could be even more valuable to sponsors heading into 2021, with an anticipated heightened interest in the Olympics from sports fans denied the chance to watch so many elite events in 2020.

“Brands can leverage that reinvigorated interest in athletes,” Jonny Madill, who negotiates sponsorship contracts as a lawyer at London-based Sheridans, said.

“Look at the opportunity of having an extra 12 months, and whenever sports starts again the level of engagement and interest will be off the charts.”