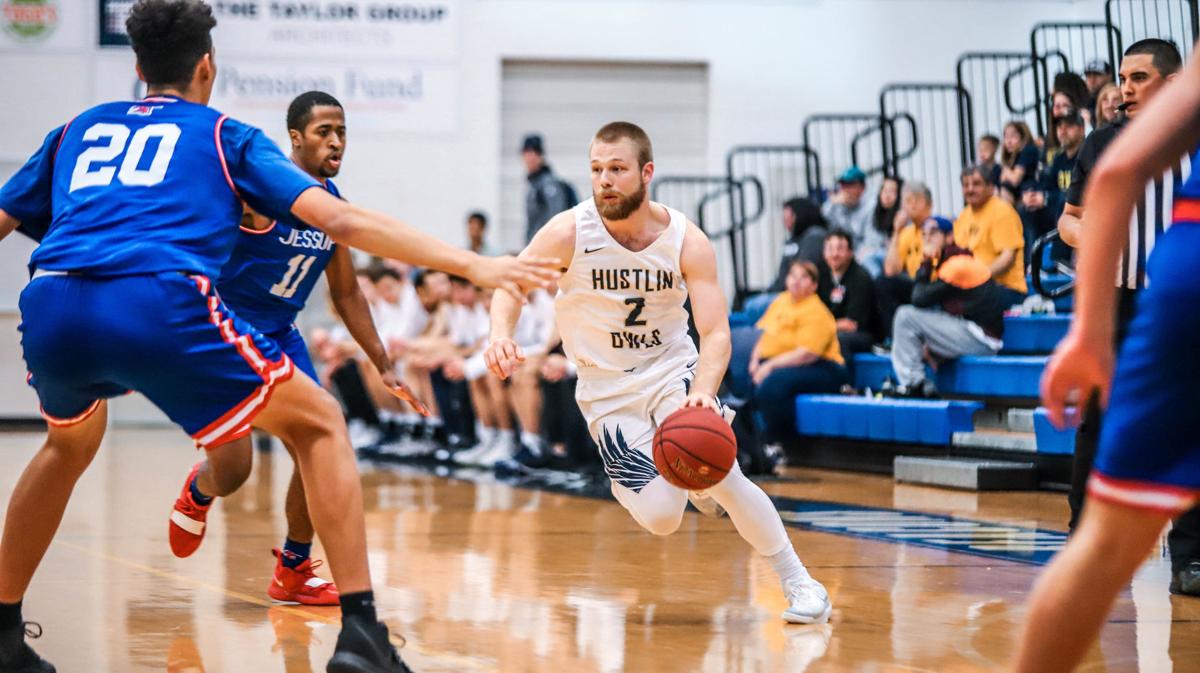 Senior Mitchell Fink dribbled around the William Jessup defense in tournament play earlier this season when Oregon Tech was at Northwest Christian University. 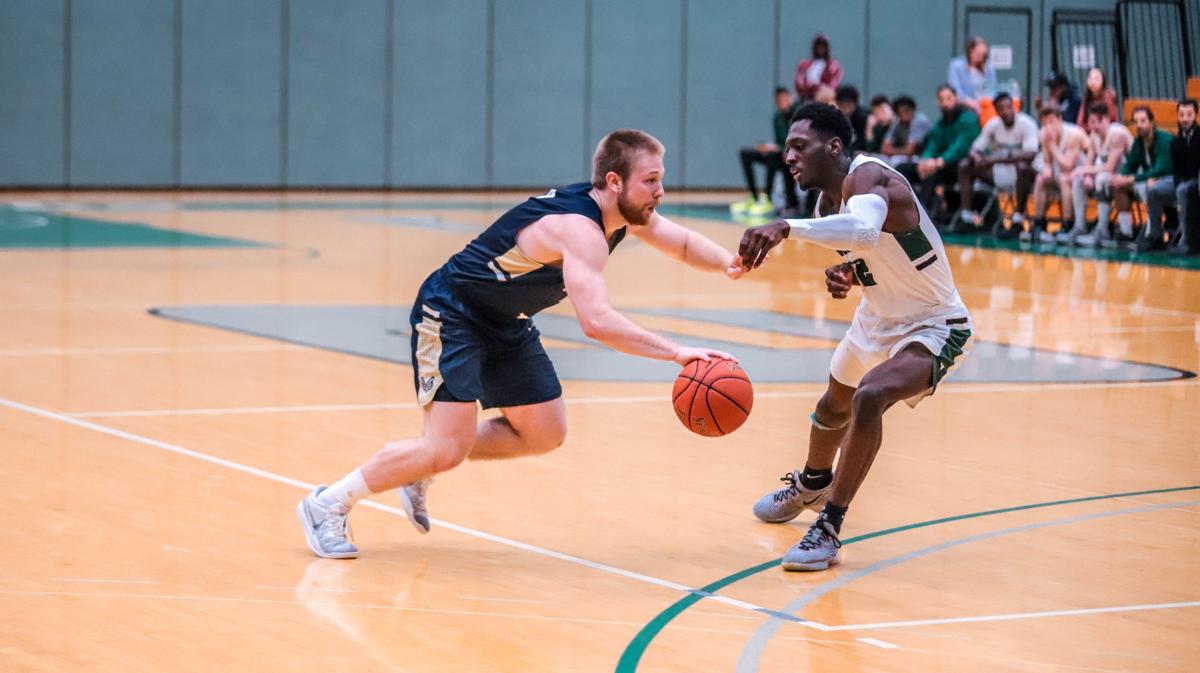 Mitchell Fink looks toward the key as he dribbles past an Evergreen State opponent in an Oregon Tech game played in Olympia, Wash., earlier this year. 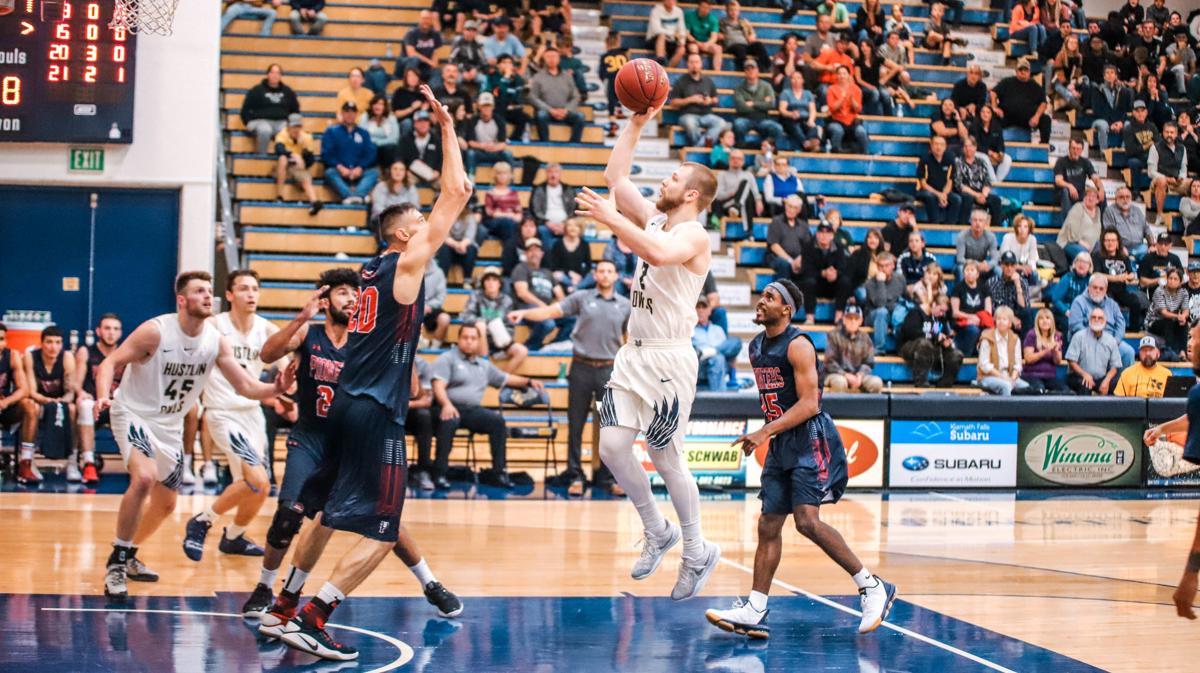 Oregon Tech senior Mitchell Fink puts up one of his patented jump shots in a game against Antelope Valley earlier this season.

Senior Mitchell Fink dribbled around the William Jessup defense in tournament play earlier this season when Oregon Tech was at Northwest Christian University.

Mitchell Fink looks toward the key as he dribbles past an Evergreen State opponent in an Oregon Tech game played in Olympia, Wash., earlier this year.

Oregon Tech senior Mitchell Fink puts up one of his patented jump shots in a game against Antelope Valley earlier this season.

Oregon Tech fans might find it intriguing, but Mitchell Fink had just one college basketball offer.

He found a nice home with the Hustlin’ Owls, where he received the offer, and has turned in what will be one of the school’s finest careers by the time the middle of March comes around.

“I think that the culture of the program, the support of the fans, the connection with the coaches all made me come here and feel comfortable,” Fink said. “I knew I wanted to go to a four-year university, too.”

The biggest challenge for the 22-year-old senior from Clackamas — adjusting to life in a relatively small community.

“I didn’t know what to expect,” he said. “I was nervous moving to a smaller city.”

Basketball helped him settle in.

“The brotherhood of the team helped me get past the away-from-home jitters,” Fink said.

“The whole journey has been so great, and I don’t want to forget even the stuff that was not so glamorous.”

Those are reasonably minor.

Fink likely will finish his career as the all-time leader in assists, one of the top two or three all-time scorers, a potential three-time Cascade Collegiate Conference Player of the Year and, with another solid season, a third All-American honor.

Fink gained first-team All-American honors a year ago when he helped the Hustlin’ Owls to the NAIA Division II men’s national championship game, where Tech dropped a tough decision to Spring Arbor of Michigan and four other brilliant games.

“When Coach Parnell recruited me, he said we wouldn’t settle for anything below being one of the best programs in the country, and I wanted to be in a culture to win at the highest level,” Fink said.

He, along with Tyler Hieb and Seth Erickson, are set to become members of a rare breed of Oregon high school graduates — participants in four national tournaments.

“We had seniors like Bryan Beard, Chris Faust and Joel Yellow Owl, and we had a new energy when Coach Parnell came in,” Fink said. “We didn’t have to reinvent the wheel.”

He was one of five players who were part of Parnell’s first recruiting class, along with Scotty Burge and Garret Albrecht, both of whom redshirted their first season at OIT.

“All five of us as freshmen had a common goal, that we didn’t want to be average,” Fink said. “We wanted to win a league championship, a national championship.”

“The two main things have been that we have worked hard and that we have trust in each other and in our coaching staff,” he said. “The standard of the program is hard work.

“The hardest challenges have been staying positive through it all, things like injuries, players leaving and thinking about how we can make those things positives.

“Losing Quim (Vallve, last season’s lone senior) was hard on us, but his hard work has made us better this year,” Fink said.

His relationships are what will last, especially with teammates who, like Fink, have played in three national tournaments (so far), a great road trip to Eastern Oregon and The College of Idaho his sophomore season and plenty of honors.

“Those are things I’m proud of,” the communications major said, “but it still comes down to hard work and success by the team.”

“Mitchell has had an incredible career at Oregon Tech, and will go down as one of the all-time greats in this program,” Parnell, himself a former OIT All-American, said.

“He is one of the reasons this program is back to playing at the level we are now. He’s not only a big-time scorer, but has led the country in assists twice in his career and is on the verge of doing for the third time,” the coach continued.

“He has a tremendous work ethic and is as fierce a competitor as I’ve ever seen. Sometimes,” Parnell said, “his fierceness can come off in a negative way, but no one questions his will to win.”

Fink’s time is more than basketball, too.

“At OIT I have met a lot of professors and fellow students who have made an impact on my life,” Fink said. “The city, there are more people than I can name, people who have made a difference.”

Fink at a Glance