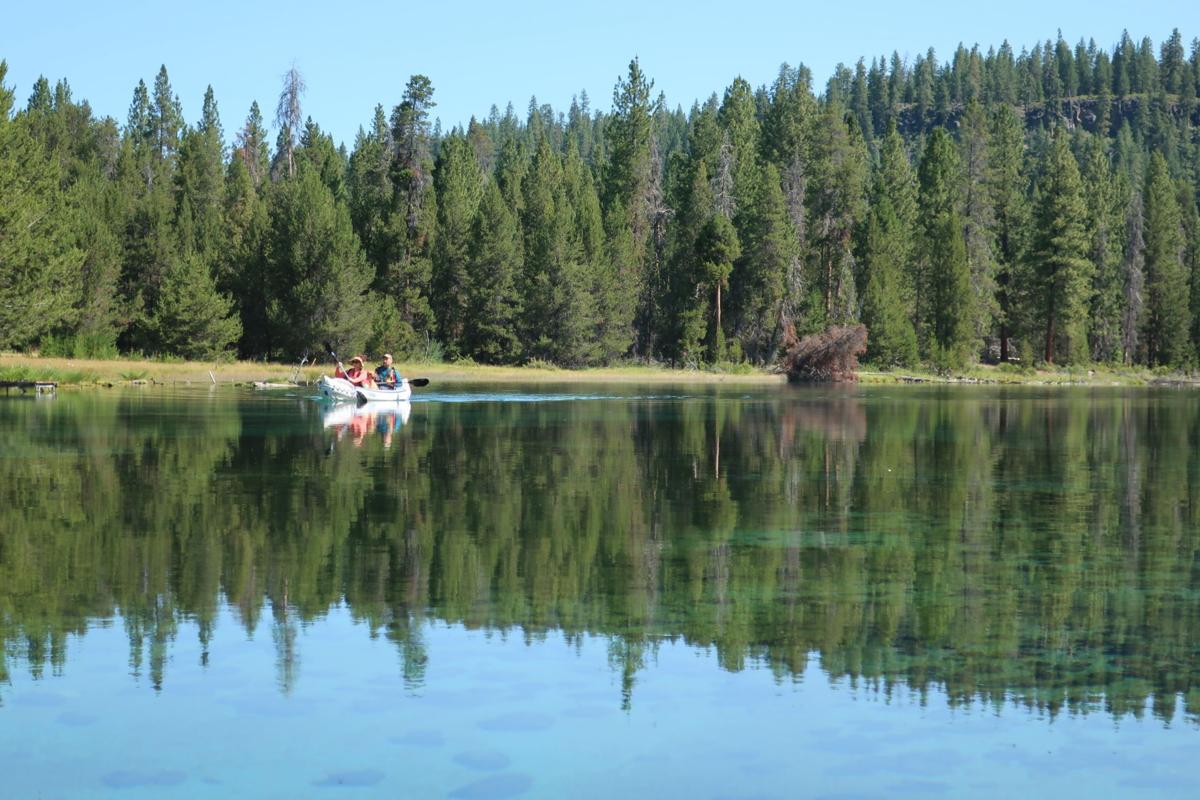 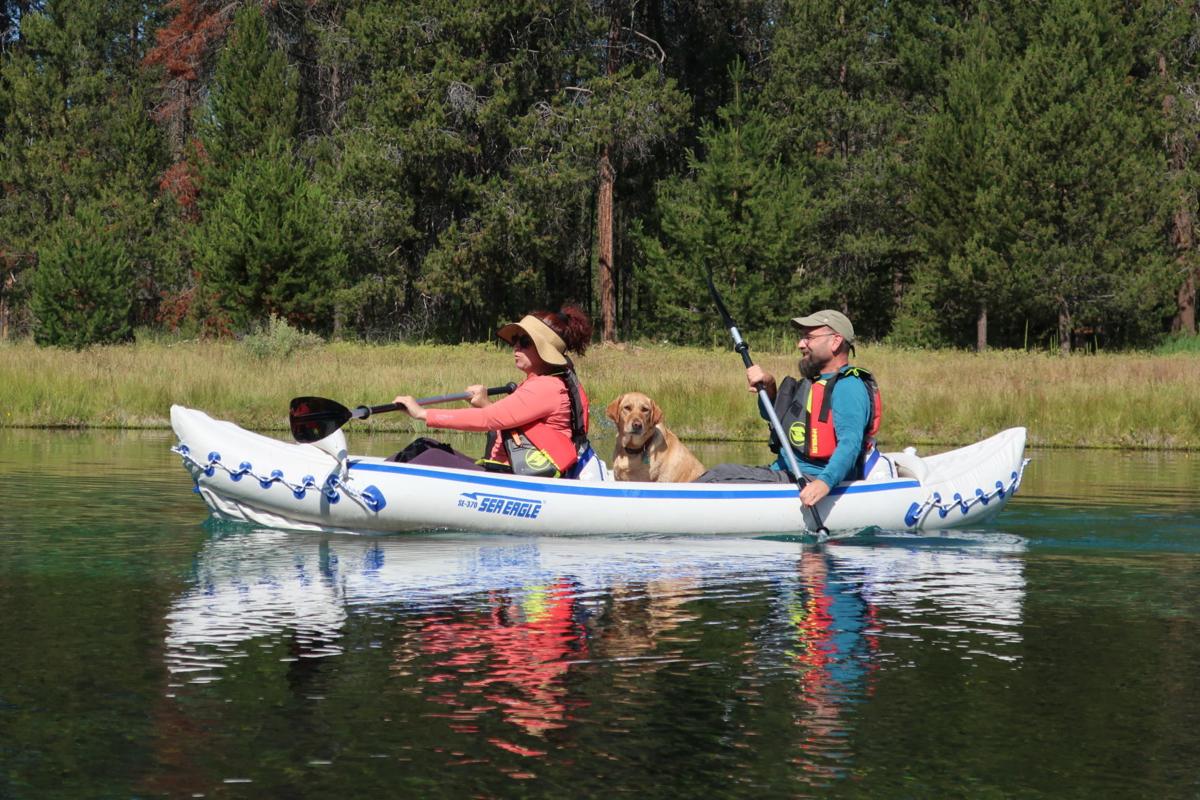 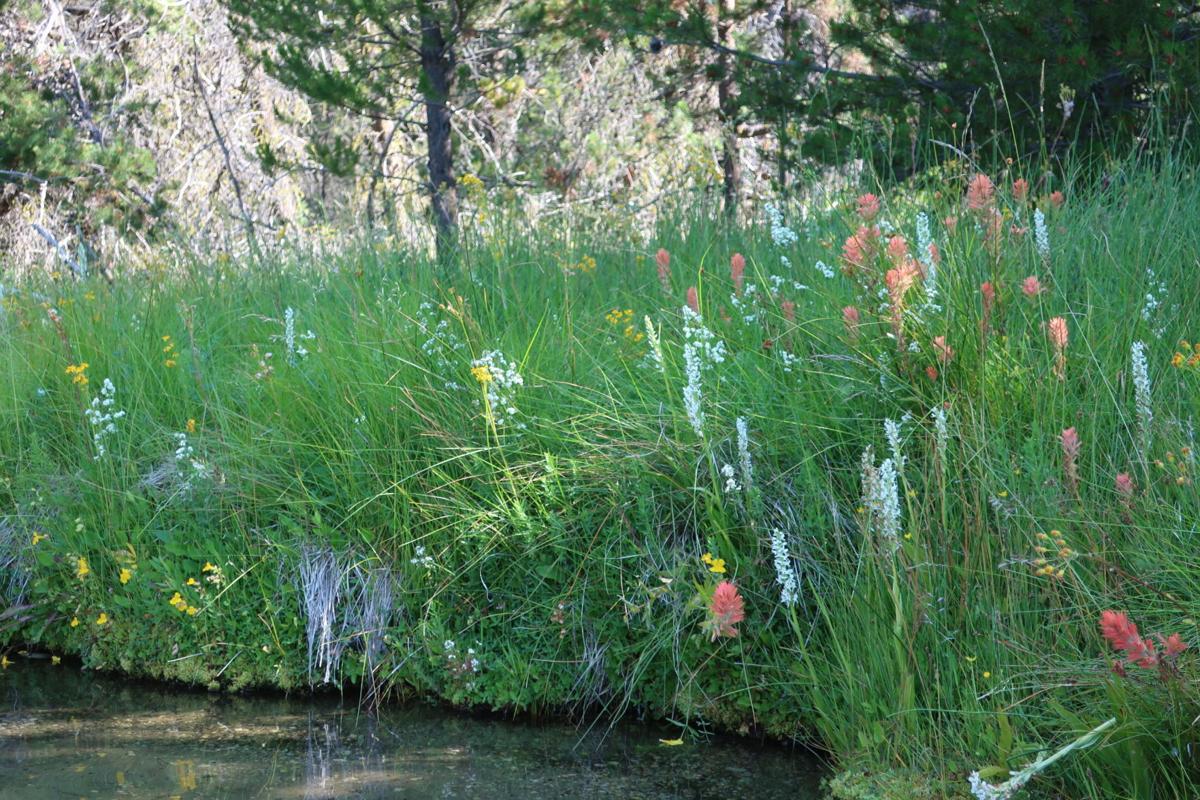 Vibrant wildflowers run alongside much of Spring Creek. 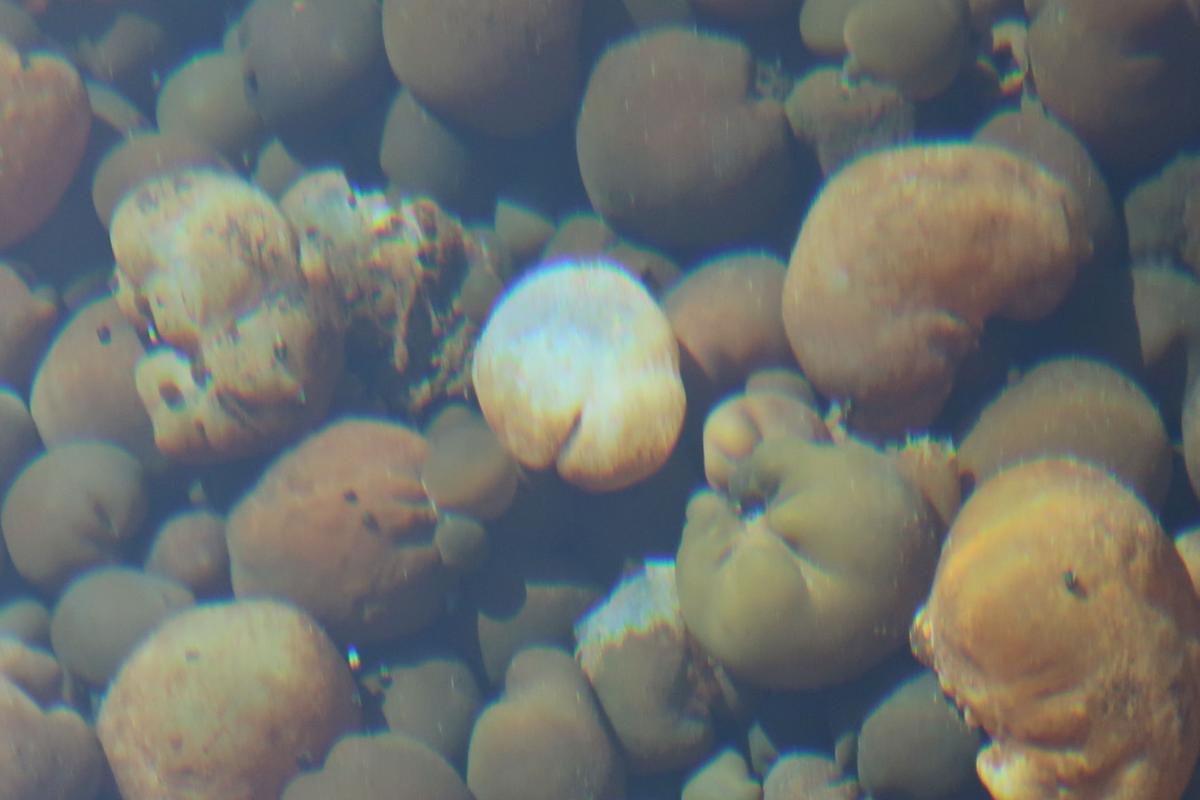 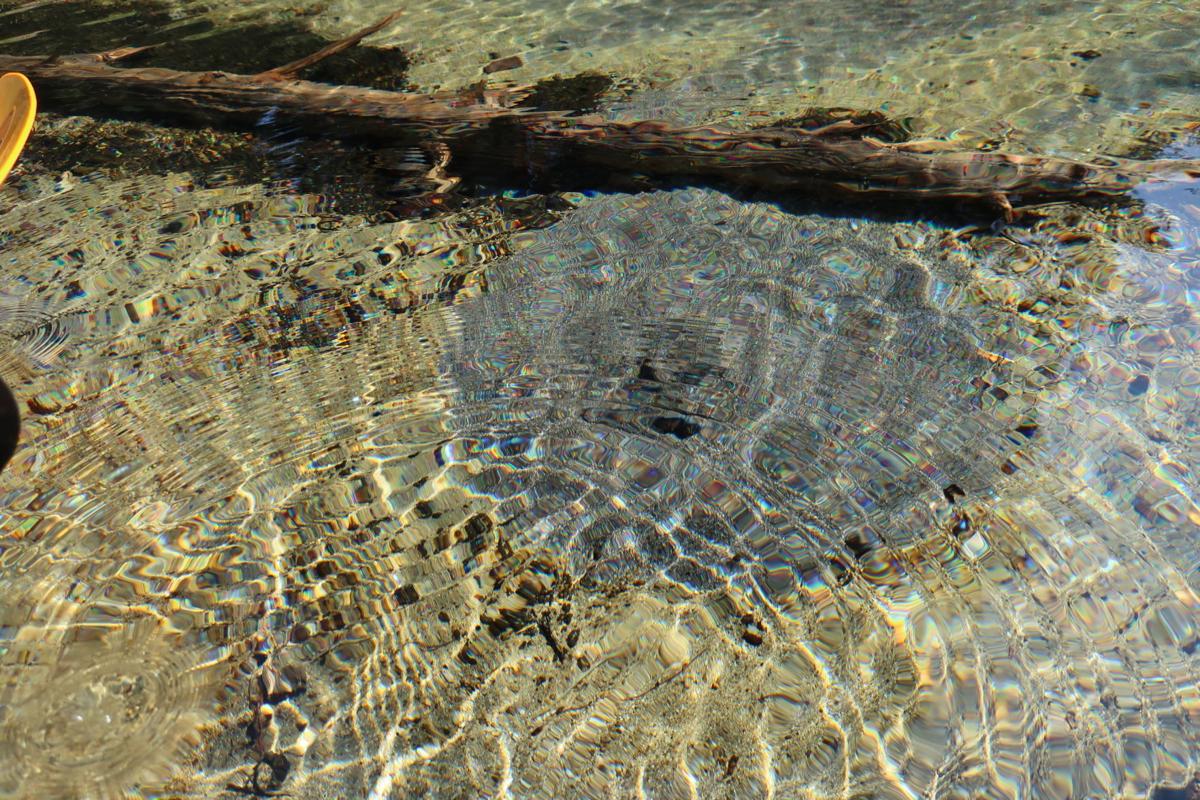 “Dancing sand” bursts into Spring Creek near its headwaters. 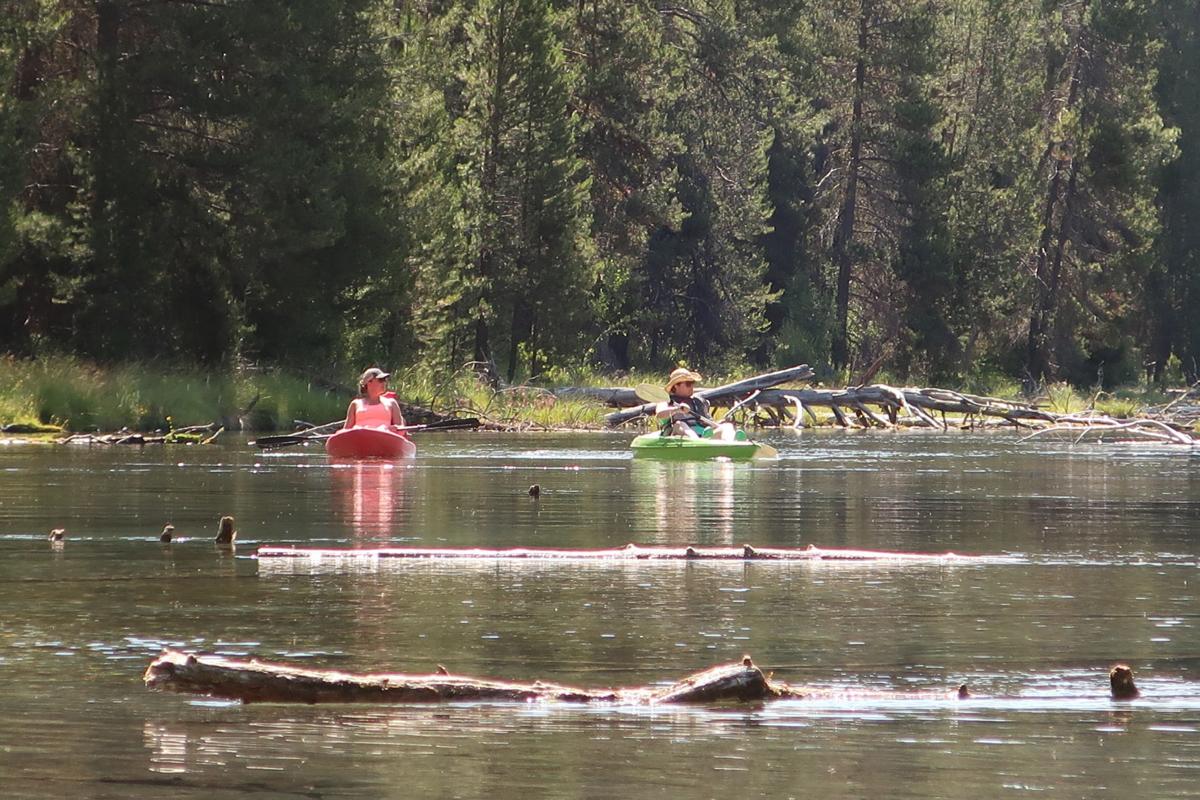 Vibrant wildflowers run alongside much of Spring Creek.

“Dancing sand” bursts into Spring Creek near its headwaters.

At first glance I thought they were cobblestones. Not just some, but hundreds that, as we paddled upstream, multiplied into the thousands. That got me to wondering how did they got there. But something intuitively told me they weren’t rocks.

“Wow!” shouted the person in the kayak behind me. “Mare’s eggs!”

Scientifically they’re nostoc pruniforme, a species of blue-green algae. Mare’s eggs grow in colonies, some up to 9 inches in diameter and some weighing more than five pounds. They’re rarely found because they require three specific conditions: areas with little outside disturbance, water with low nutrient content, and constant water temperatures of 39 to 43 degrees Fahrenheit.

I’d seen colonies of Mare’s eggs years earlier at a site near the junction of the Westside Road and Seven Mile Road near the community of Fort Klamath. The site used to be signed, but because of concerns about possible damage it was removed years ago. Another concentration of Mare’s eggs is reportedly at Harriman Springs near Rocky Point.

From our kayaks, in the creek’s turquoise clear water the Mare’s eggs looked like dark green and gray rounded stones, some the size of golf balls and others like softballs with some the shape and color of potatoes. From past experience I knew they’re not to be touched or disturbed. They may look like rocks but, as I’d learned from a former biologist, each is a gelatinous mass with a hollow center. Some eggs cluttered along the creek bottom were cracked or split, exposing the center.

From “Edge of the Hills: Magic of Mare’s Eggs,” by ecologist Jennifer Gervais, I learned that various species of Nostoc have colorful folk names, including witch’s jelly and troll jelly. There’s more. The Chinese have traditionally enjoyed one species of Nostoc as a special New Year’s holiday delicacy, Peruvians collect them from mountain lakes to eat or trade for other food, and some species of Nostoc have been used in folk medicine.

Gervais had another quirky tidbit: the genus, Nostoc, was named by Paracelsus, “the Father of Toxicology." Because he also consulted astrology, Gervais said, “Nostoc might loosely be translated as ‘star snot.’”

While it’s snot for me to know, even before reading Gervais’ and others studies I regarded Spring Creek’s Mare’s eggs as fascinating. But, as various television commercials insist: “Wait! There’s more!”

Nearing the place where Spring Creek emerges from an otherwise seemingly ordinary wall of rocks and plants, small geysers of water bubbled from the creek’s sandy bottom. Sometimes called “dancing sand,” water percolated from the small openings, creating darkened rings that contrast with the otherwise sparkling clear water. These aren’t Macbeth’s steamy witch’s cauldrons that boil and bubble — these are numbingly cold springs.

There are two ways to paddle the bucolic waters of Spring Creek. We chose the picnic/boat launch area at Collier Memorial State Park day use picnic area. It’s also possible to drive about four miles north of Collier Park on Highway 97 and near the top of Spring Creek hill turn left (west) on an unmarked gravel road. It goes past the Oux-Kanee overlook and continues downhill to a parking area.

From the Collier put-in, we reached the spring by paddling upstream, taking our time along Spring Creek’s translucent, clear water. There was no reason to rush. Spring Creek’s shoreline and log islands were decorated with wildflowers — paintbrush, yellow monkeyflowers, lupines and more. Because of the water clarity the sandy creek bottoms were the color of turquoise.

From the put-in, the creek is briefly bordered by some homes and seasonal residences. Those disappear upstream with the creek lazily working toward the springs, a distance of about two miles. Because there’s virtually no current it’s a simple trip for even first-time paddlers.

A relatively early start is suggested because Spring Creek is popular, especially on weekends. After poking around the spring and circling back to our start, other paddlers in kayaks and stand-up paddle boards appeared, some in pairs, then flotillas of six, 10 and more. Some, disappointingly, had devices playing music. It wasn’t obnoxious or loud, but being in nature isn’t enhanced by mood music.

Spring Creek, with its star snot/witch’s jelly and other bubblicious sights, is a place to celebrate and enjoy in its natural setting, including the sounds of silence.