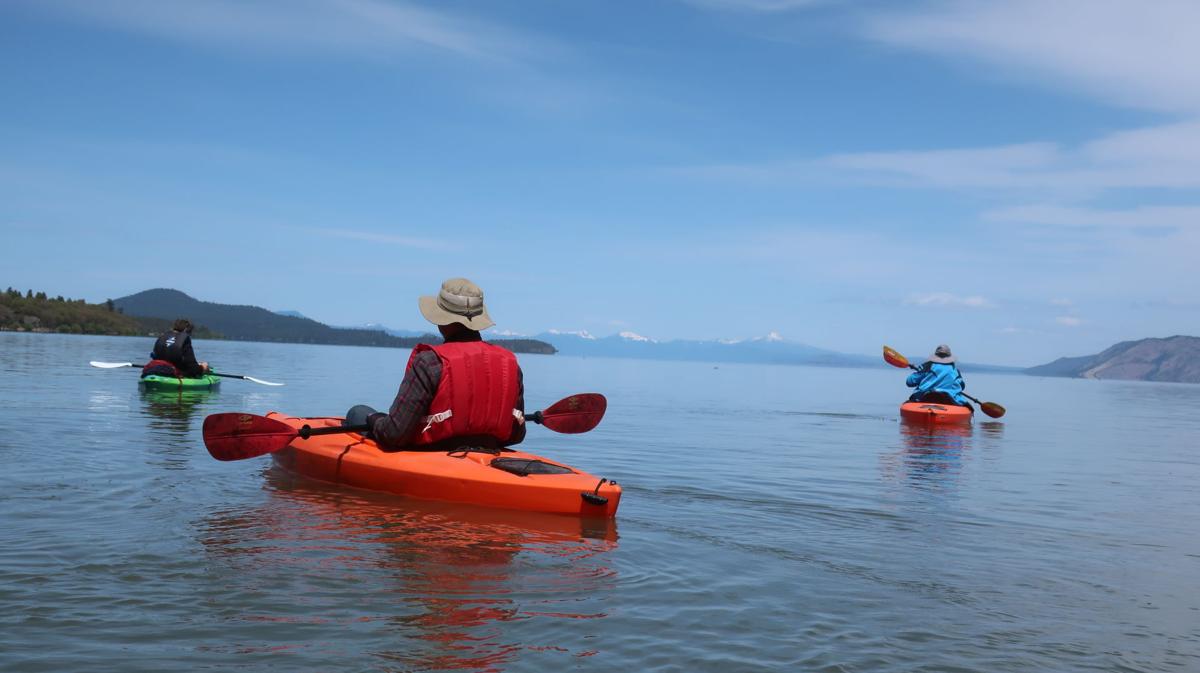 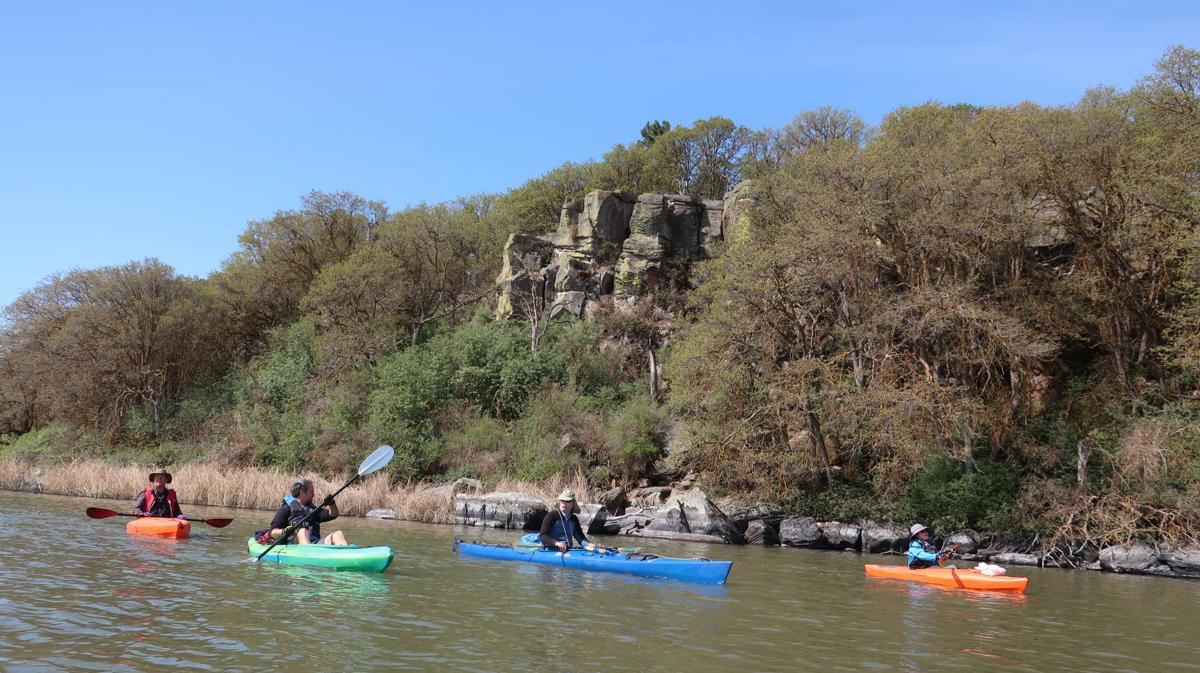 ABOVE: Grebes cruises Upper Klamath Lake against a backdrop of snow-capped Cascades peaks. BELOW: Rock outcrops along the Running Y Ranch Resort panhandle tower over paddlers. 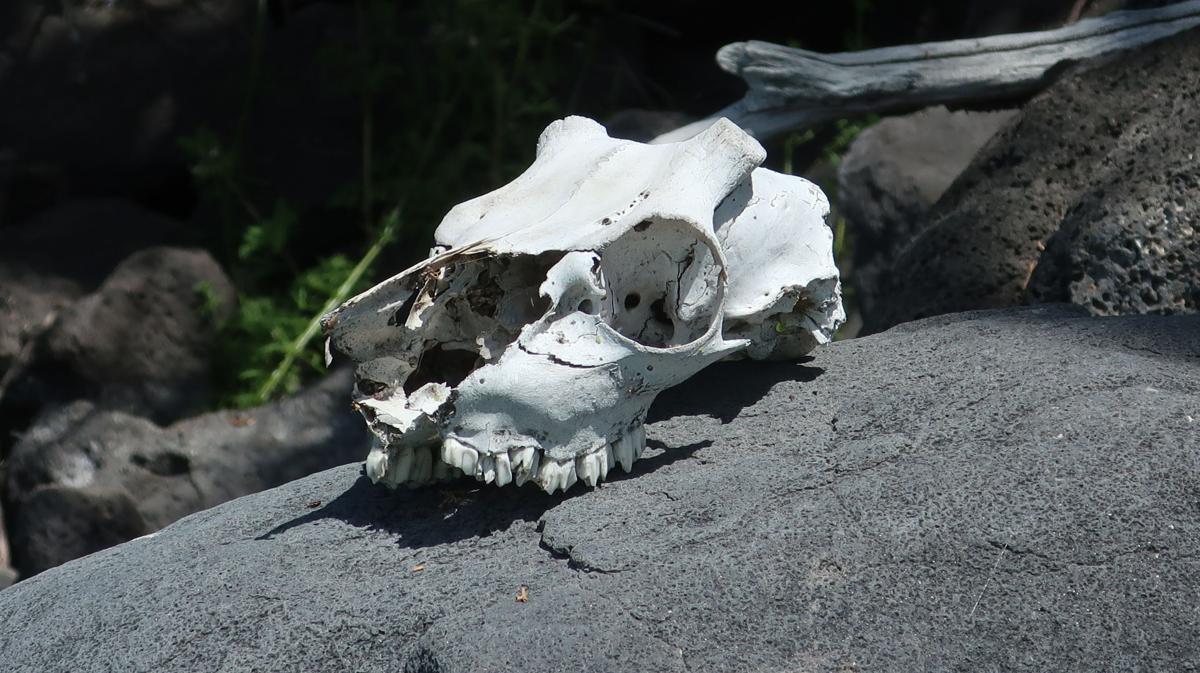 A skull is all that remains of a Buck Island buck. 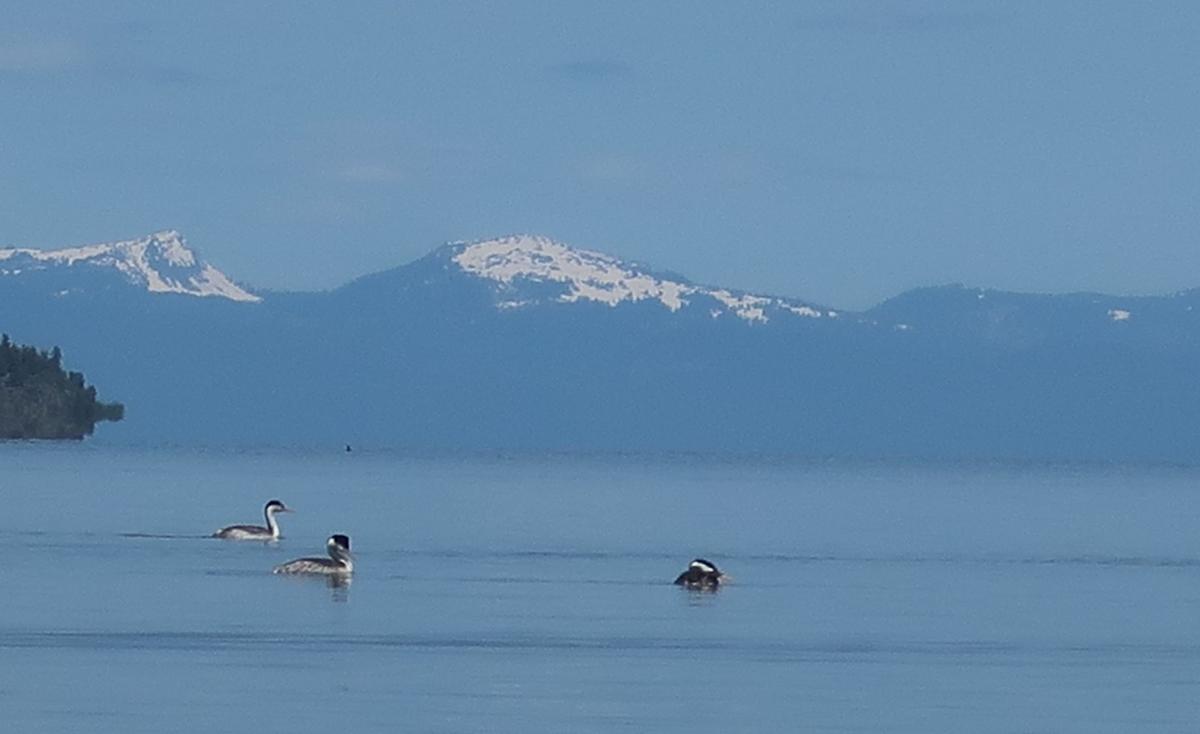 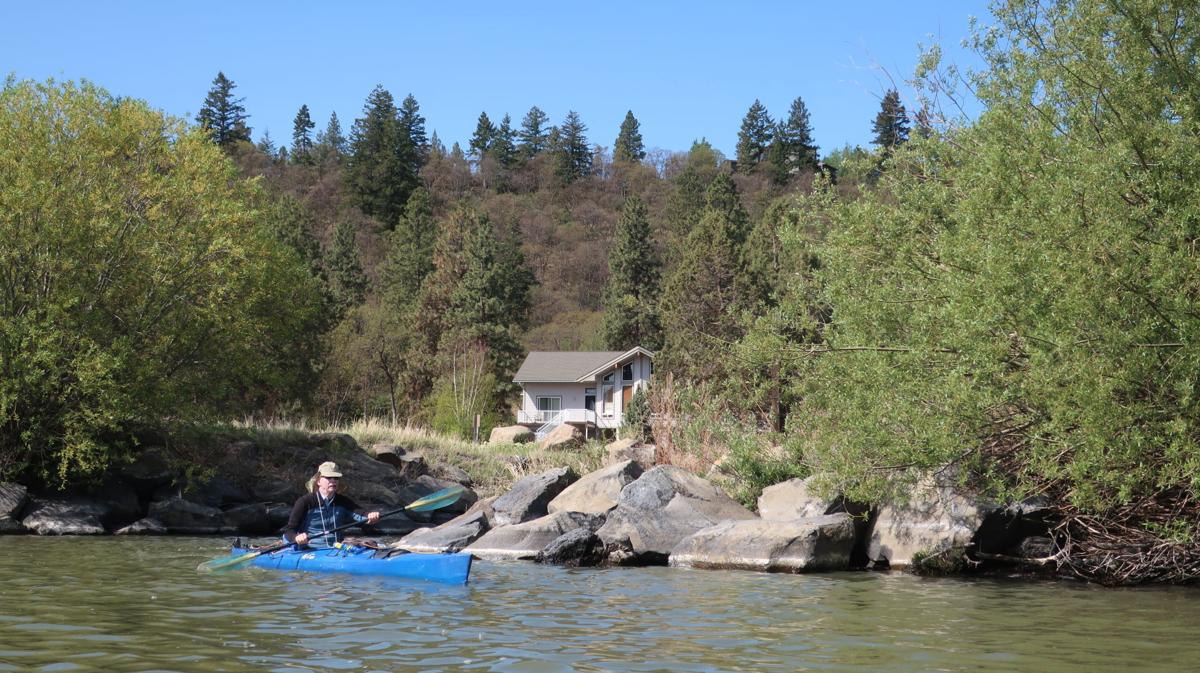 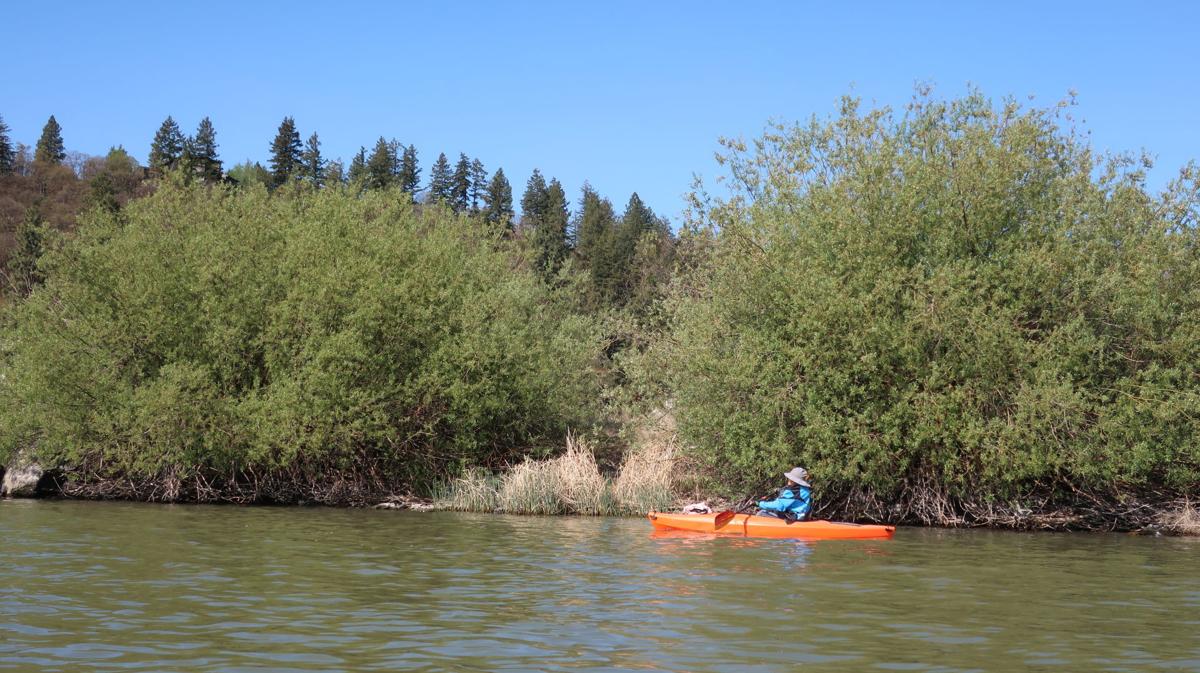 ABOVE: Grebes cruises Upper Klamath Lake against a backdrop of snow-capped Cascades peaks. BELOW: Rock outcrops along the Running Y Ranch Resort panhandle tower over paddlers.

A skull is all that remains of a Buck Island buck.

We had almost kayaked around the island in Upper Klamath Lake when someone asked the inevitable question: “Why do they call it Buck Island?”

We had seen many deer, but all does and fawns, rummaging and running in the brush and trees, but no bucks. Later, when we finally did see a buck, all we saw was his skull, partially hidden behind some rocks near the shoreline. Obviously, the buck stopped here.

Passing the buck was just part of our paddle. Because the 170-acre island is privately owned, the only time someone stepped ashore was to move the skull from its semi-hiding place to a more easily visible lakeside rock.

We had started our Buck Island circumnavigation earlier from the boat dock at the Running Y Ranch Resort. After following the shoreline north alongside the Panhandle past two massive rock outcroppings, we angled east across the lake to the island.

Happily, the winds stayed calm as we paddled about a mile to the Buck Island’s west shore. Getting there we took our time, listening to trip leader Gary Vequist tell stories or just gazing north along Upper Klamath Lake’s seemingly endless waters to distant snow-tipped Mount Scott and other peaks surrounding Crater Lake. We encountered flocks of birds, mostly grebes, also cruising along the lake. If we got too close, they dove underwater and out of sight or scootered along the lake’s surface before taking flight.

At the island we headed clockwise, passing dense forests of white oaks, ponderosa pines, spruce and other tree varieties. Perched atop a tall snag was an eagle, either an immature bald too young to have a distinctive white head, or a golden. A second eagle made its presence known when it launched from its hiding place, spreading its wings as it soared in the thermals and glided out of sight.

Movement on the shore revealed a quick glimpse of a raccoon leaving its lakeside rock and hurtling into the bushes. Gary spotted a deer that had likewise spotted us and was scrambling up to higher ground. Soon after, just below the ridge, two, three, then four then five and seven and eight and more deer, all does or fawns, jogged along, eventually disappearing out of sight.

After eating lunch from our kayaks near the shore with the skull, we — Gary, Justin Wright, Doug and Cyndi Albro, and Tom Essex, who, just in case, followed us in his boat — resumed our island circuit.

Along the way a trio of white bufflehead ducks came into view. We glided behind them – two males identifiable by the large white patch on their heads, dark backs and white chests. The boys were flanking a single female, less colorful with a dark head with a distinctive smaller, single white patch. Gary said the males were courting the female. Suddenly the female and one male flew off, leaving the other male paddling solo. “Reminds me of my bachelor days,” laughed Justin — or was it Doug?

We saw more raccoons, all looking tubby and well fed. As they hastily abandoned their sunny lakeside perches and scampered off, they glanced back at us, giving seemingly rude glances at us, the intruders.

Paddling back across the lake we intentionally aimed for the shoreline south of our put-in. We saw mallards and other birds, but the most fascinating sight was a large cloud over a tabletop-shaped hill. At first glance the cloud was shaped like a chest or box. A few head turns later it had divided into a pair of fluffy, convoluted clouds. Then, seconds later, it was shaped like a cupcake, still over the same hill.

Closer to and along the shore more grebes skittered along the lake before diving or launching. More regally impressive were snowy egrets, which appeared as frozen as statues before beginning their slow-motion wing flapping, oh-so gradually flying forward, sometimes taking true flight or, more often, propelling themselves just far enough to another tree to distance themselves from our small armada of kayakers.

Too soon our outing ended.

But this isn’t the story’s ending. What about the question: How did Buck Island get its name?

According to a story by Malcolm Epley in the Oct. 21, 1948, Klamath Falls Herald and News, “Old timers on the west side of Upper Klamath Lake report that Buck Island in the lake was named just that because buck deer were occasionally observed swimming in its direction from the west side.” But, as another story told, it had also been known as Rattlesnake Island because it had “rattlesnakes by the thousands.”

Whatever name, we had a great paddle, finding a numb skull and, by circling the island, passing the Buck.