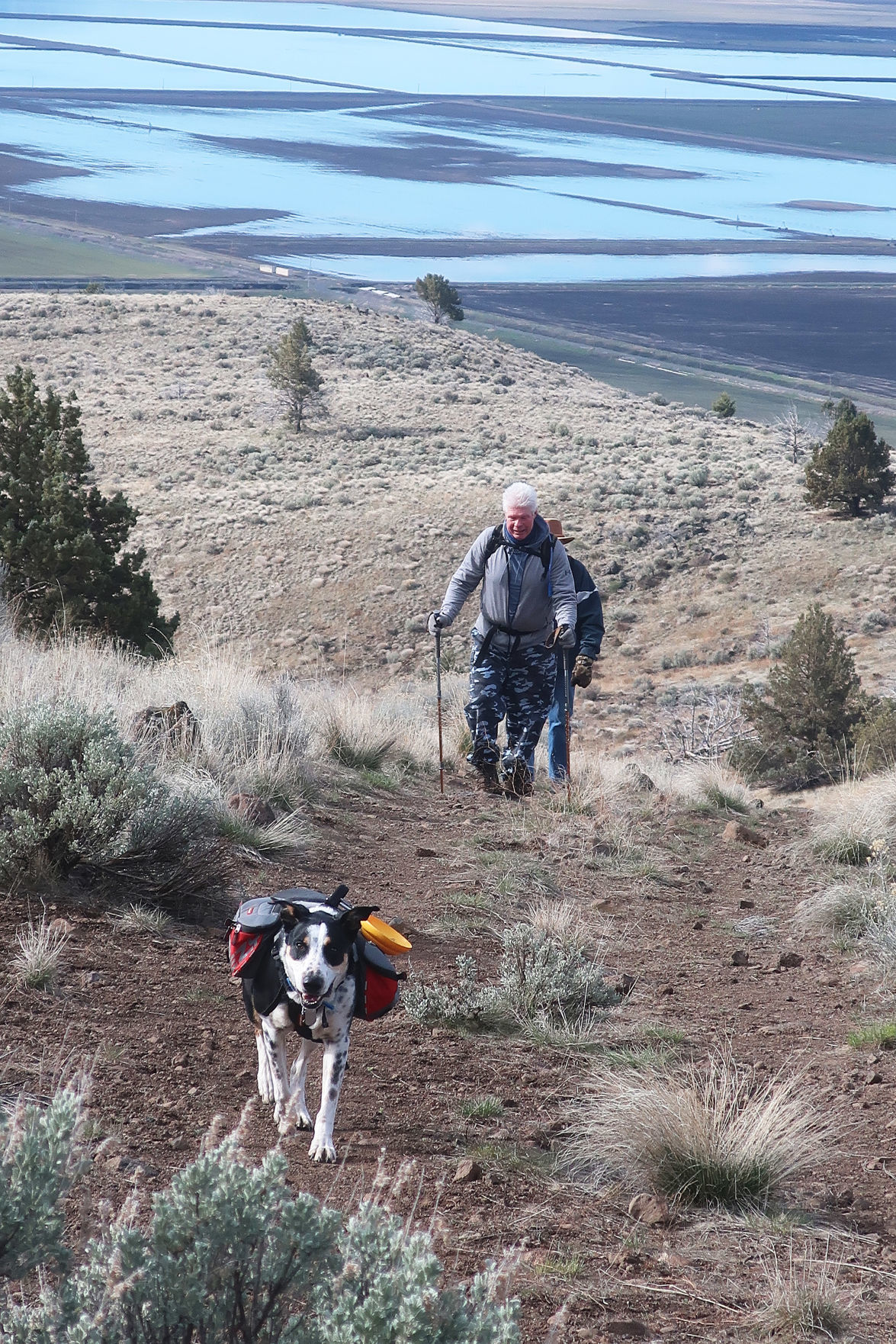 Chase the dog and hikers keeping their appropriate distance as they make their way up the Klamath Hills. 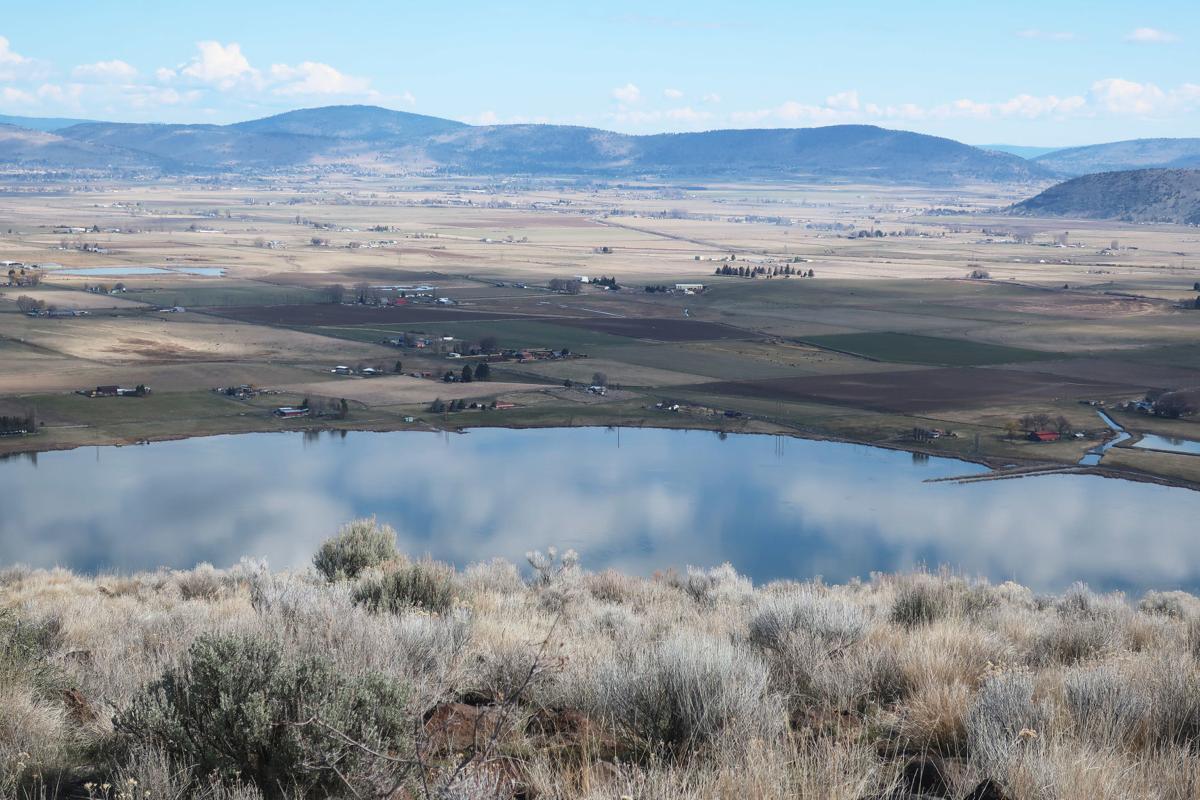 Chase the dog and hikers keeping their appropriate distance as they make their way up the Klamath Hills.

Sometimes it’s necessary, and wise, to get out of the house.

With ongoing concerns about social distancing because of the COVID-19 coronavirus pandemic, it is important to follow the stay at home directives. But those directives still leave room to get out and exercise. But getting outside also means doing so safely — in small groups and maintaining a safe distance of at least six feet from others.

There are several places in the Klamath Basin where being outside away from others is easily done, including the Klamath Hills. Located about seven miles south of Klamath Falls on 1,596 acres of Bureau of Land Management lands, it’s an excellent choice for a short or multi-hour outing.

Happily, the area is closed to motorized vehicles but open to hikers and birders along with seasonal deer and chukar hunters, but an area near the parking lot is sometimes used as a firing range.

Among the Klamath Hills major attractions is that it’s close to town and little visited.

While the Klamath Hills doesn’t match the splendor of Crater Lake, Lava Beds or sites along Cascades, it does have views that impress and terrain that begs exploration.

Hiking gradually uphill from the trailhead/parking area off the Lower Klamath Lake Road — the only public access — the southward sights spread across farmlands and fields that frame Mount Shasta 90 miles distant. Despite this winter’s drought, precipitation is only about half of normal, those views include fields, most at least partially water-covered.

Part of the Klamath Hills appeal is that the area is minimally developed. The visible trail is relatively brief. From the parking lot it often straddles cavernous gopher holes before passing alongside a guzzler, which provides water for wildlife. According to BLM’s Klamath District biologists, it’s one of the Klamath Hills’s three guzzlers. Two are designed for deer and pronghorn antelope while the smaller barbwire fenced guzzler near the trailhead is designed for birds, including quail and chukars. From beyond the guzzler, there are no designated trails, and that’s part of the fun – and a plus.

Visible are old roads that slice through sections of the Hills, but once past the bird guzzler most of the hiking is make-your-own-way cross country. It’s a pick-and-choose experience, and no two Klamath Hills hikes have ever been the same. On some we’ve angled northwest toward higher points. One of the tallest has a trailer with solar panels that is used by a private landowner as a relay system for irrigation. From the high points it’s not unusual to see cruising golden eagles.

We angled northeast to another tall bump — they can’t be accurately described as peaks — climbing and working our way up and around occasional lava flows and rocky outcrops and, one time, a large rock cairn.

Our most recent day’s wanderings took our small hiking group – we were staying within state-prescribed guidelines, and staying cautiously distant from each other – north, gradually working uphill searching for a snack-spot overlook. Eventually we found one, a hillside slope with Spring Lake immediately below and, slightly further out, Tingley Lake, Stukel, Hogback and other familiar sights.

Precisely where we hiked is impossible to say. We skirted near Captain Jack, a peak named after the Modoc leader involved in the Modoc War of 1872-73, which at an elevation of 5,138-feet is the high point in the Klamath Hills.

Don’t expect lush, green settings. It’s a region of grass, sagebrush and often lonely juniper trees, but little other vegetation. We did see lizards and squirrels, but some have spotted mule deer, antelope, quail and snakes, including varieties we were delighted not to see, rattlesnakes.

Spectacular doesn’t fit the description for the Klamath Hills. It’s a place that’s relatively obscure and offers a somewhat barren landscape, but even before concerns about the coronavirus – and hopefully after — the Klamath Hills are a place for wandering and exploring, a place for the hills.

To reach the Klamath Hills trailhead, from Klamath Falls take Highway 97 south past Midland and the Oregon Welcome Center and turn left on Cross Road. After a short distance, turn right on Lower Lake Road to the well-signed trailhead.