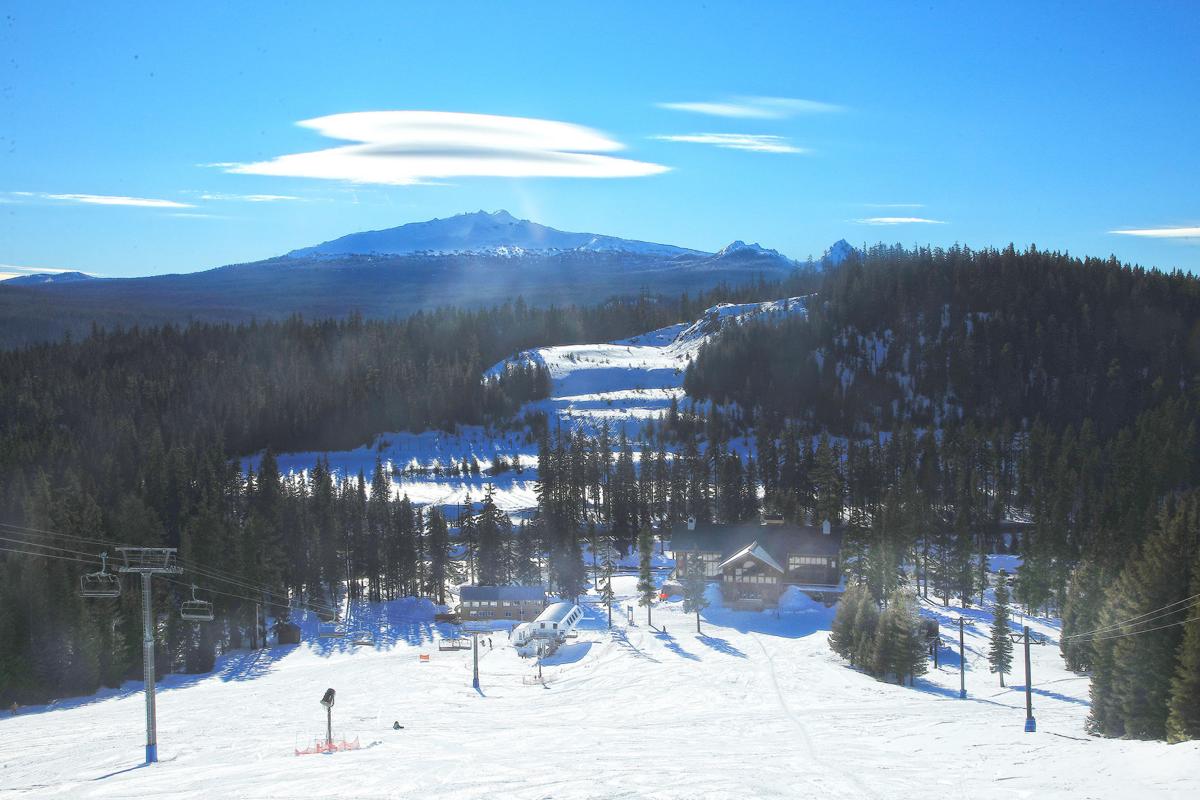 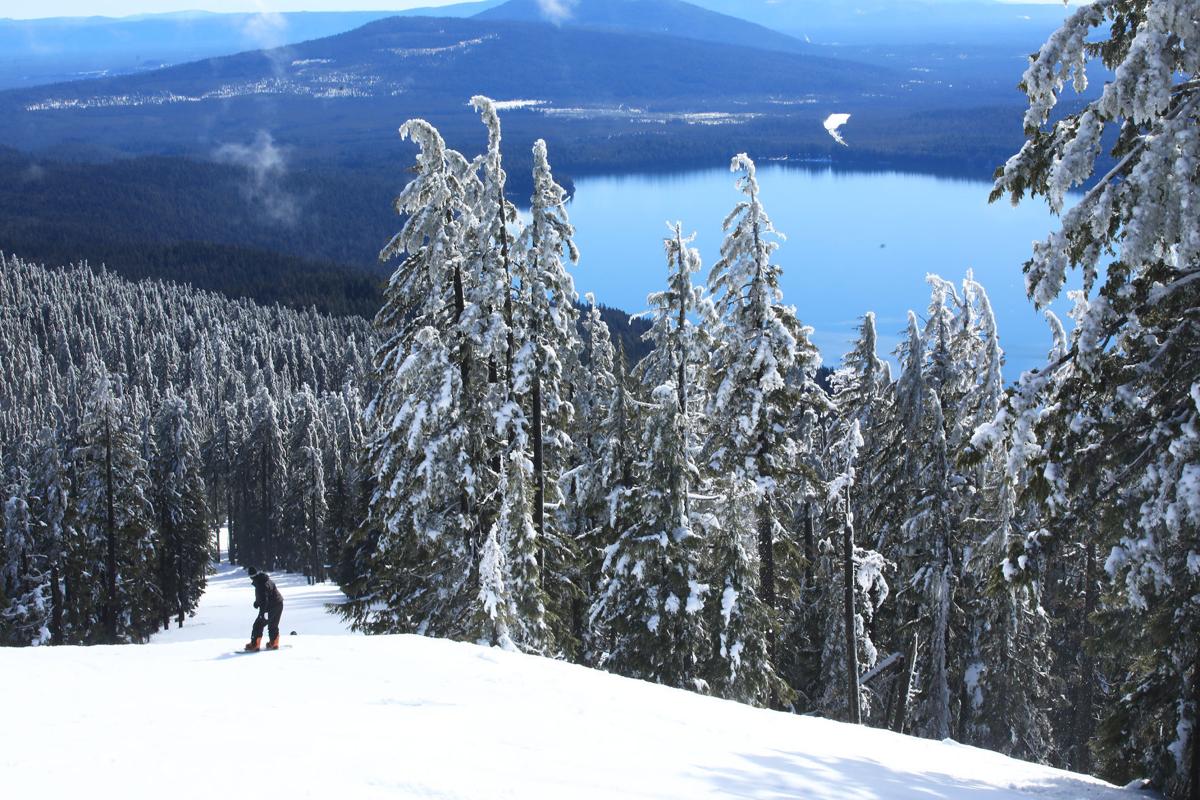 Willamette Pass offers a variety of runs for skiers and snowboarders. 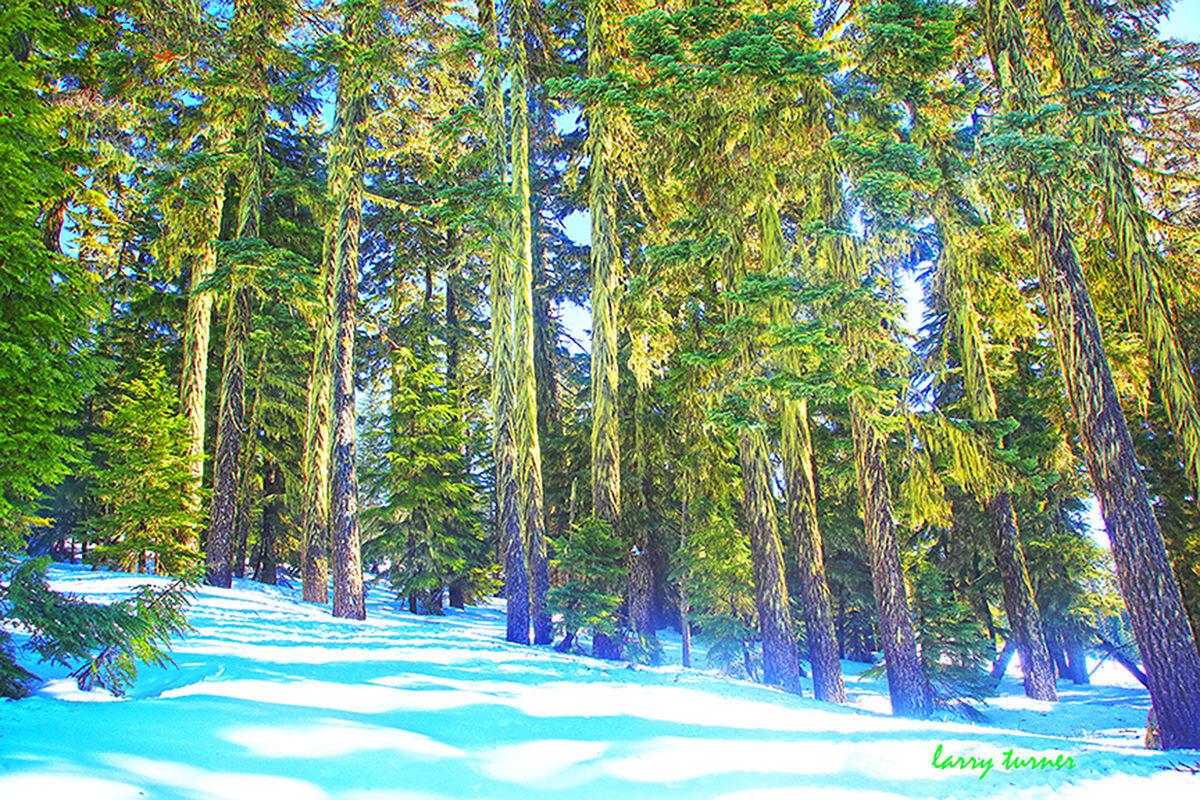 Lichen-draped trees were a mesmerizing sight at Willamette Pass's ski and snowboard area. 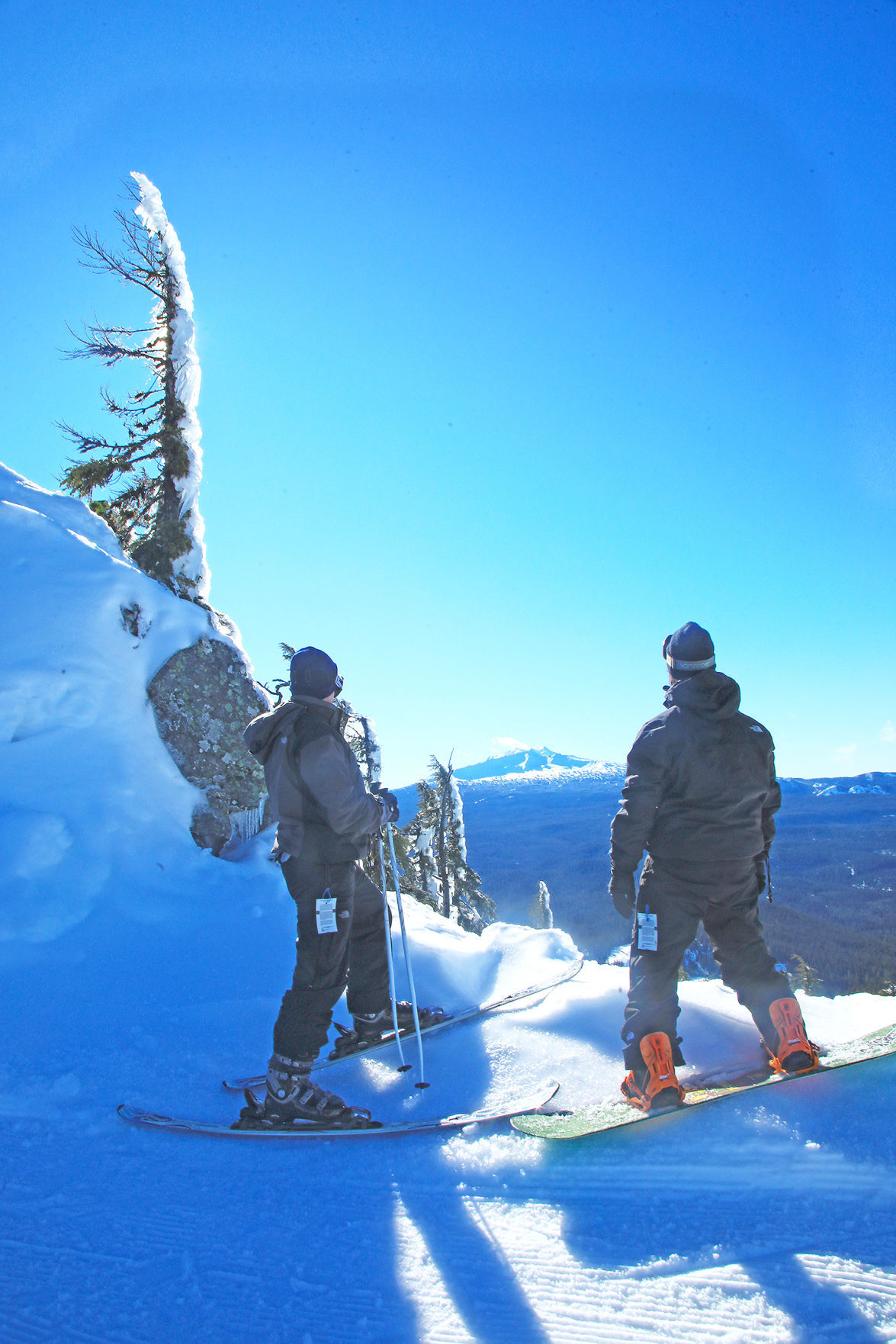 Ryan Blaser and Cory Fletcher, both of Eugene, take in the view at Willamette Pass ski area. 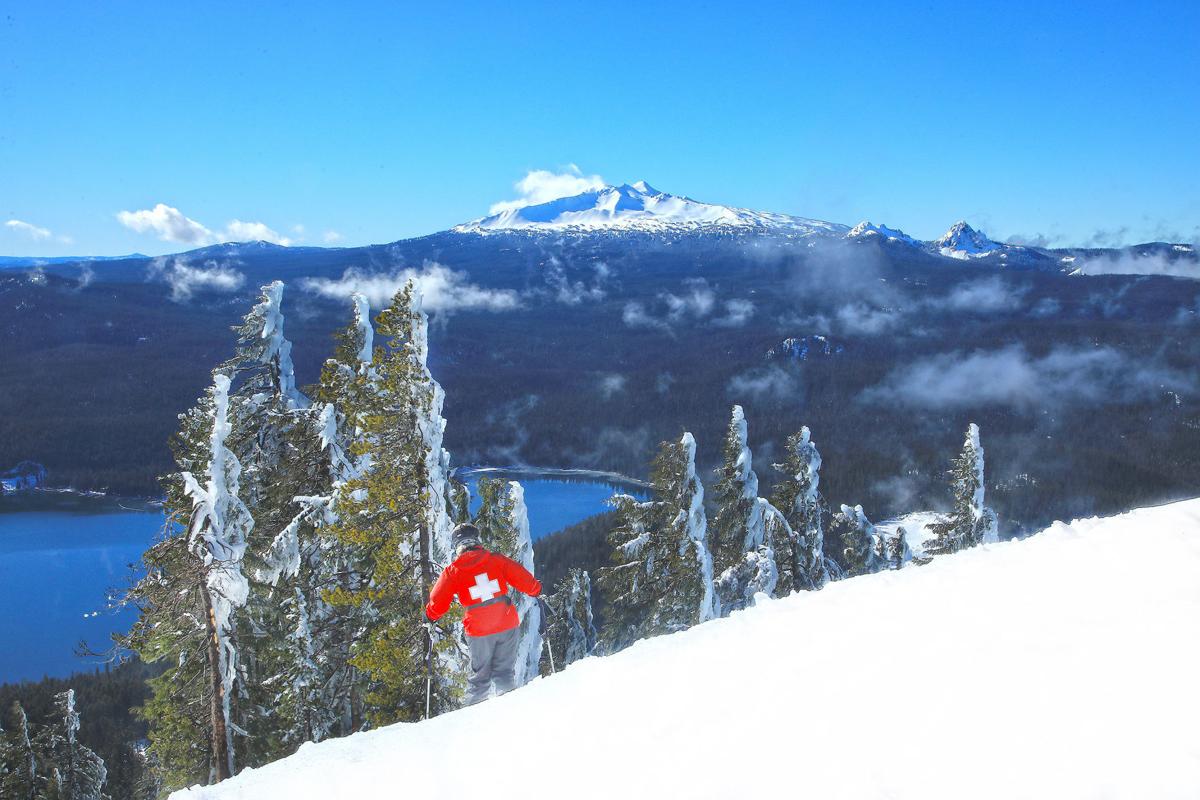 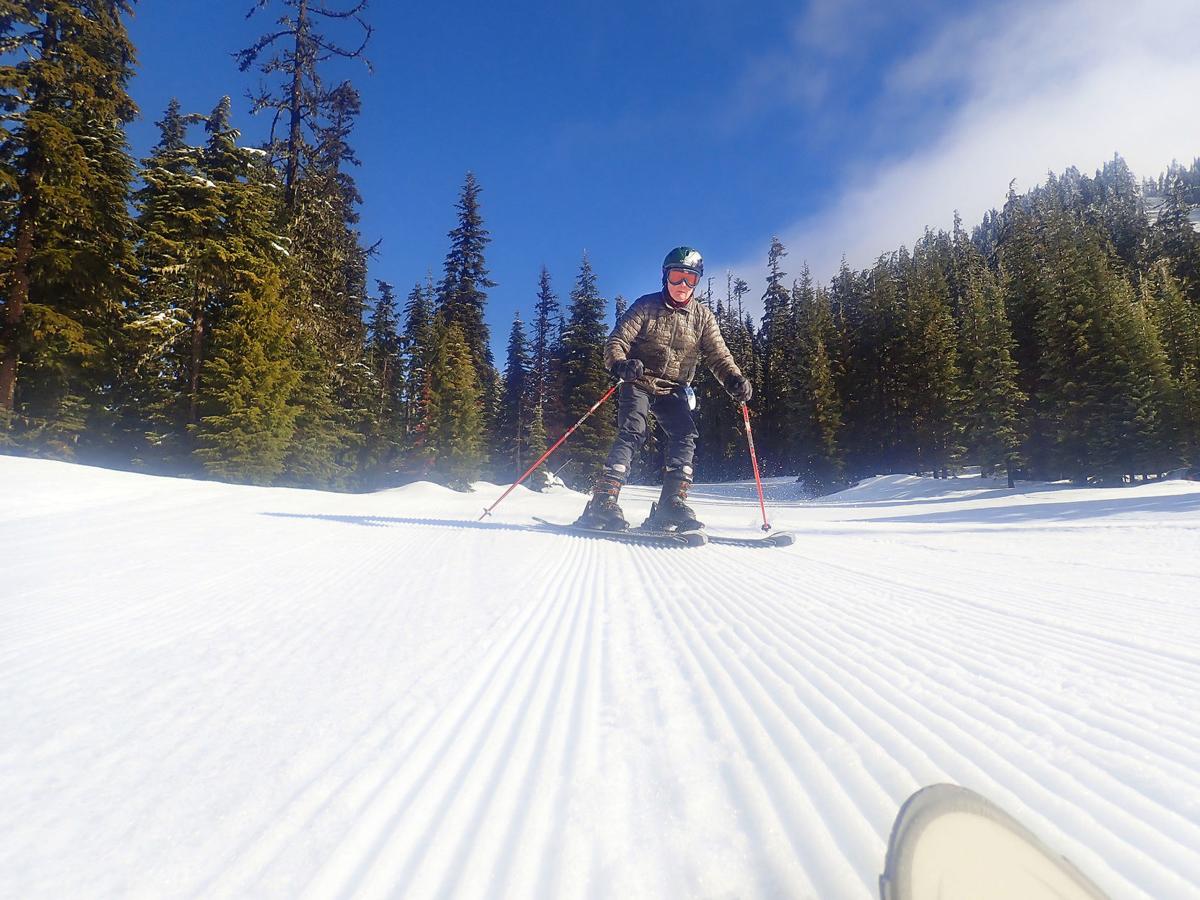 A view of a downhill skier at Willamette Pass ski area. 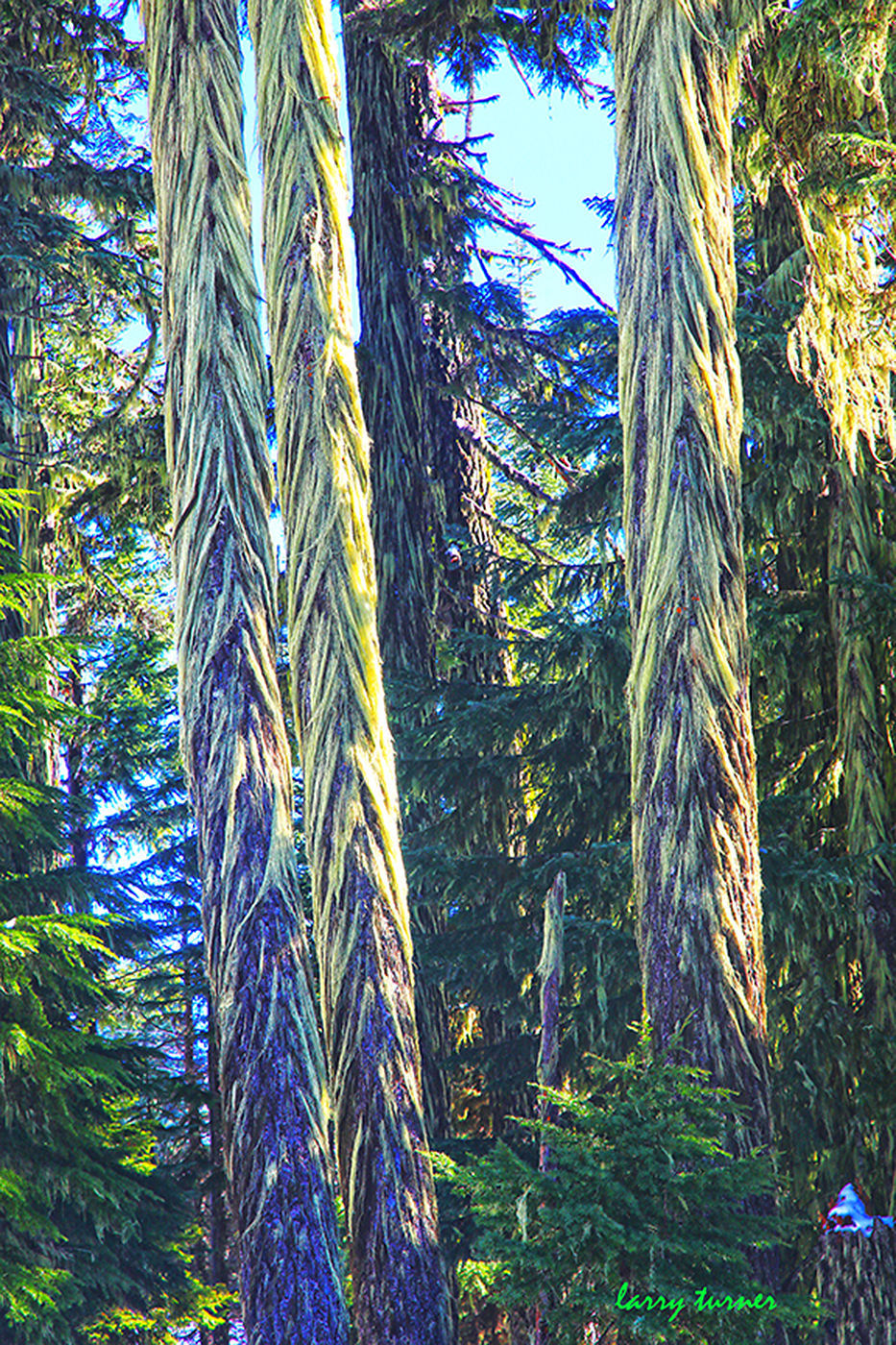 A closer look at the lichen-loaded trees.

Ryan Blaser and Cory Fletcher, both of Eugene, take in the view at Willamette Pass ski area.

A closer look at the lichen-loaded trees.

Sometimes the skiing is secondary to simply being there.

On this day, ”there” was the Willamette Pass Resort, the downhill ski and snowboarding area off Highway 58 at the Klamath-Lane County line. The morning clouds were evaporating, gradually revealing an ever-brightening blue sky. Larry Turner and I had completed several runs off the Twilight chairlift, where we glided down beautifully groomed cruiser runs carved through lush forests of regal cedars, firs and spruce.

Our already cheery dispositions brightened several notches as sunlight flooded the slopes. We skied to the Eagle Point Accelerator, a “six-pack,” a high-speed quad that can carry six passengers. Because it was a weekday, and because heavy ice had kept some of Willamette’s lifts and runs closed in previous days, we had the chair, and most of the mountain, almost to ourselves.

Chairlift rides are usually just a form of transportation. But the rides that followed were more truly a sense of transport. The previous days of persistent, ever-hardening ice had left trees lining the lift and throughout the forest with heavily iced, frozen limbs burdened and layered in wonderfully erratic shapes and forms. And, as the ever-brightening sunlight penetrated the frostbitten landscape, the resulting warmth created a widespread thaw.

But from atop the chair at Eagle Peak, an elevation of 6,666 feet, the frosty sights were temporarily forgotten because of the grand, sweeping panoramic views to the west.

Odell Lake reflected the blue sky, shimmering in the sunlight. Behind Odell Lake was Diamond Peak, an 8,748-foot tall peak that straddles the Klamath and Lane county line. Its ragged peak was framed in a canopy of clouds, clouds that, as we watched, mysteriously transformed size and shape. Larry is a photographer so, mesmerized, he stayed on top snapping hundreds of images while I skied on.

And as I waited for Larry, any sense of impatience was negated by a cacophony of unanticipated thundering sounds. Sometimes the sounds were those of a rapidly flowing river. Other times like a cascading waterfall. And more threatening was the explosive rumble of an advancing avalanche.

But the source of the sounds was something different – varied sounds of trees were shedding their icy burdens. I watched astonished as thick layers of hard-packed ice spewed off, tumbling and crashing through lower tree limbs and loudly plummeting to the ground.

It wasn’t a day for tree skiing, but it was great for tree watching.

During rides up the Twilight Chair I was mesmerized watching other trees. The lift passed alongside groves of Douglas firs draped and cloaked in mysterious green lacings. I’ve seen the phenomenon before, but never in such abundance. Later, my daughter, Molly, a botanist, and Steve Sheehy, an expert on lichens, said the green draping is probably a lichen called alectoria sarmentosa. Whatever it is, I certainly took a likin’ to it.

Before and after lunch, Larry and I toured many of Willamette’s trails from the Eagle Peak and Peak 2 chairs. Usual cruising favorites were fraught with ice, making them unusually difficult. We and only a few others skied Where’s Waldo, Boundary Park and other usually zippy-fun runs made dauntingly challenging by sheets of frozen, ice-packed snow. It felt like the angle of descent had radically steepened on runs that normally seem only nominally steep. Runs normally taken were avoided.

While carving turns, my skis squealed and screeched. And as skis increasingly screamed and vibrated, so did my wearying legs and thighs.

Although the afternoon warming had little impact on shaded runs, the ice-shedding on the trees accelerated. The sound and fury of trees unloading their frozen burdens erupted even louder. While riding the Peak 2 and Eagle Peak lifts, the trees freeing themselves of ice visibly moved higher up the slopes.

By day’s end, with unusually tired legs, Larry and I conceded it hadn’t been the ideal day for skiing, but we had no complaints. As Larry wrote on his Facebook page, “I don’t want to miss winters high on a mountain, on a pair of skis, with a view … where the air is pure and fresh, and your soul soars with the magnificence, and the solidarity of your heart with your body and mind. It is a healthy thing! You’re invigorated! You’re challenged! … Today was such a day (we) announced ourselves to the mountain, and the mountain spoke, and we rejoiced in Willamette Pass’s offerings.”

We welcomed what was offered, and were grateful.

The Willamette Pass Resort, which offers downhill and cross country skiing, snowboarding, rentals and lessons, is located on Highway 58 at milepost 58, just inside the Klamath County line. The area is open 9 a.m. to 4 p.m. Wednesdays through Sundays. For updated snow information call 541-345-SNOW (7669) or visit the website at www.willamettepass.com

“Mother Nature’s been a little tough on us this year. You just have to take what she throws at you,” said Tim Wiper, Willamette Pass’s owner-operator since 1982, referring to weather extremes that have impacted snow conditions at ski areas throughout Oregon and far Northern California.

Wiper, naturally, believes Willamette Pass has much to offer, matter-of-factly boasting, “I think everything from the views to the terrain is as good as anywhere.” And, because it’s still February, “We just hope there’s a lot of winter left.”