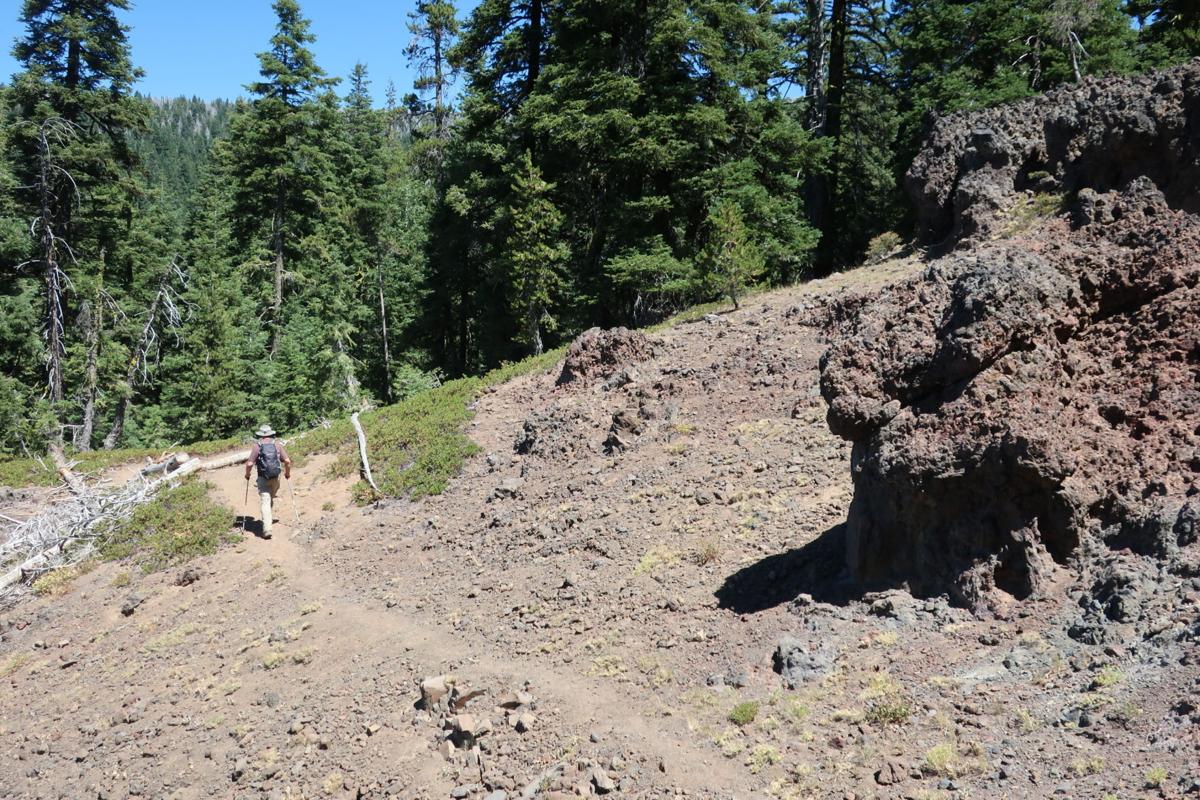 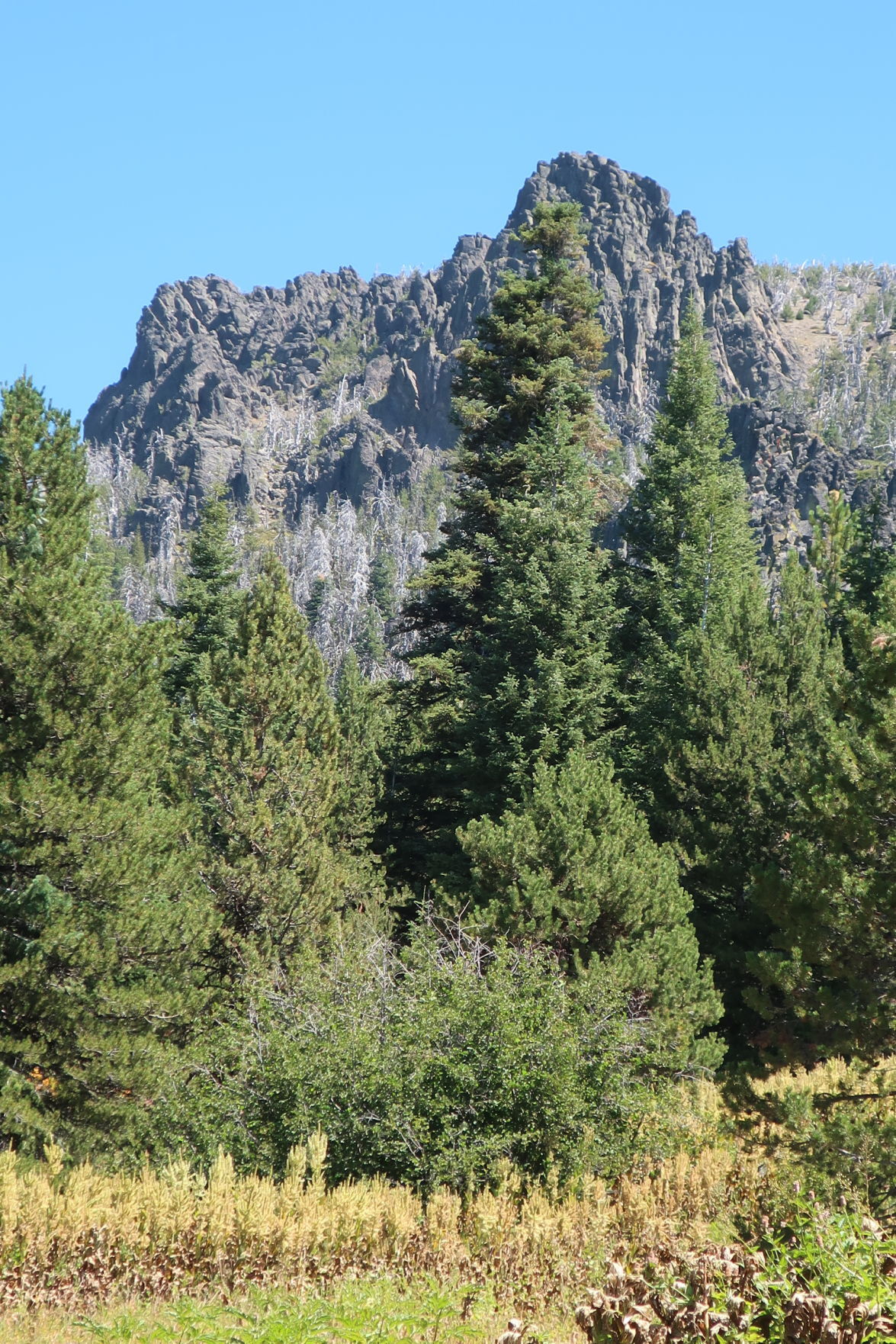 Gearhart Mountain towers high in the distance above the Deming Creek Trail. 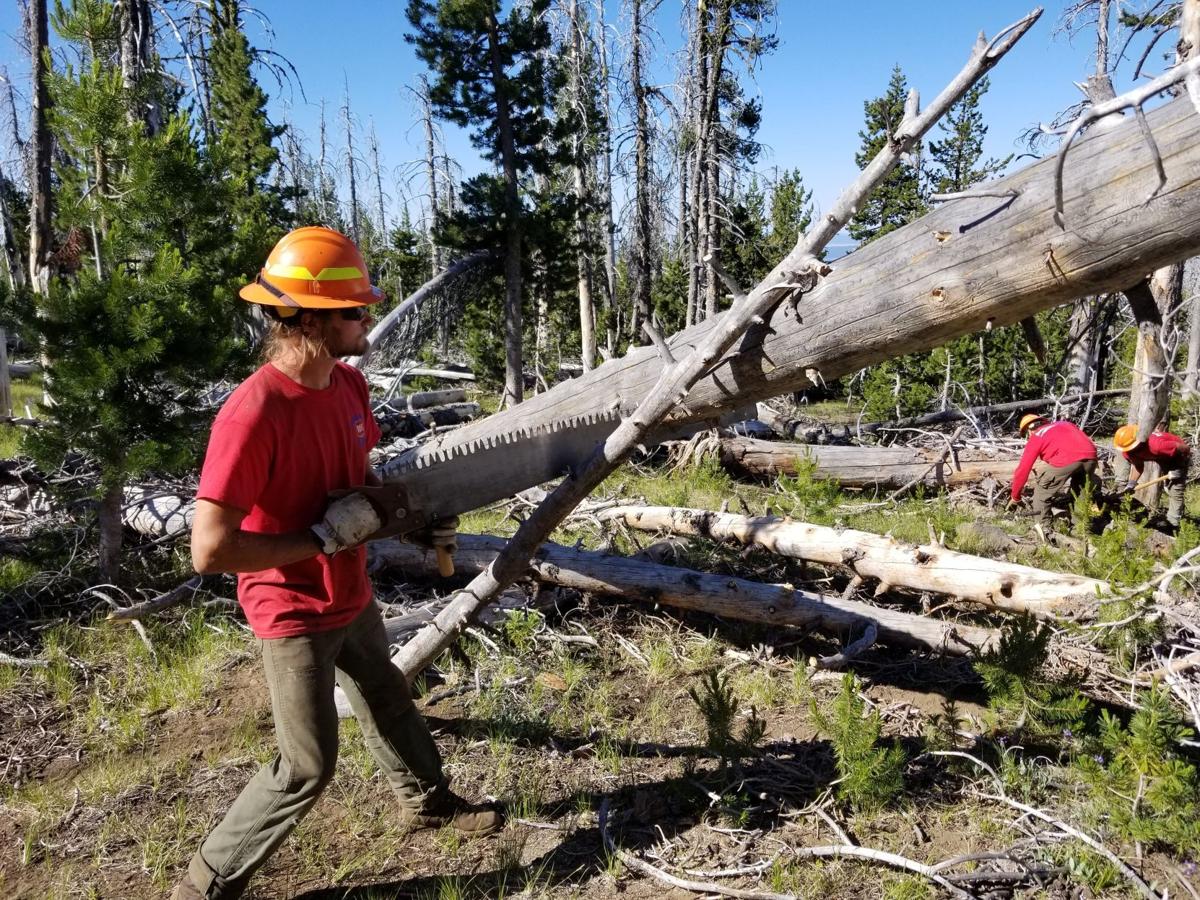 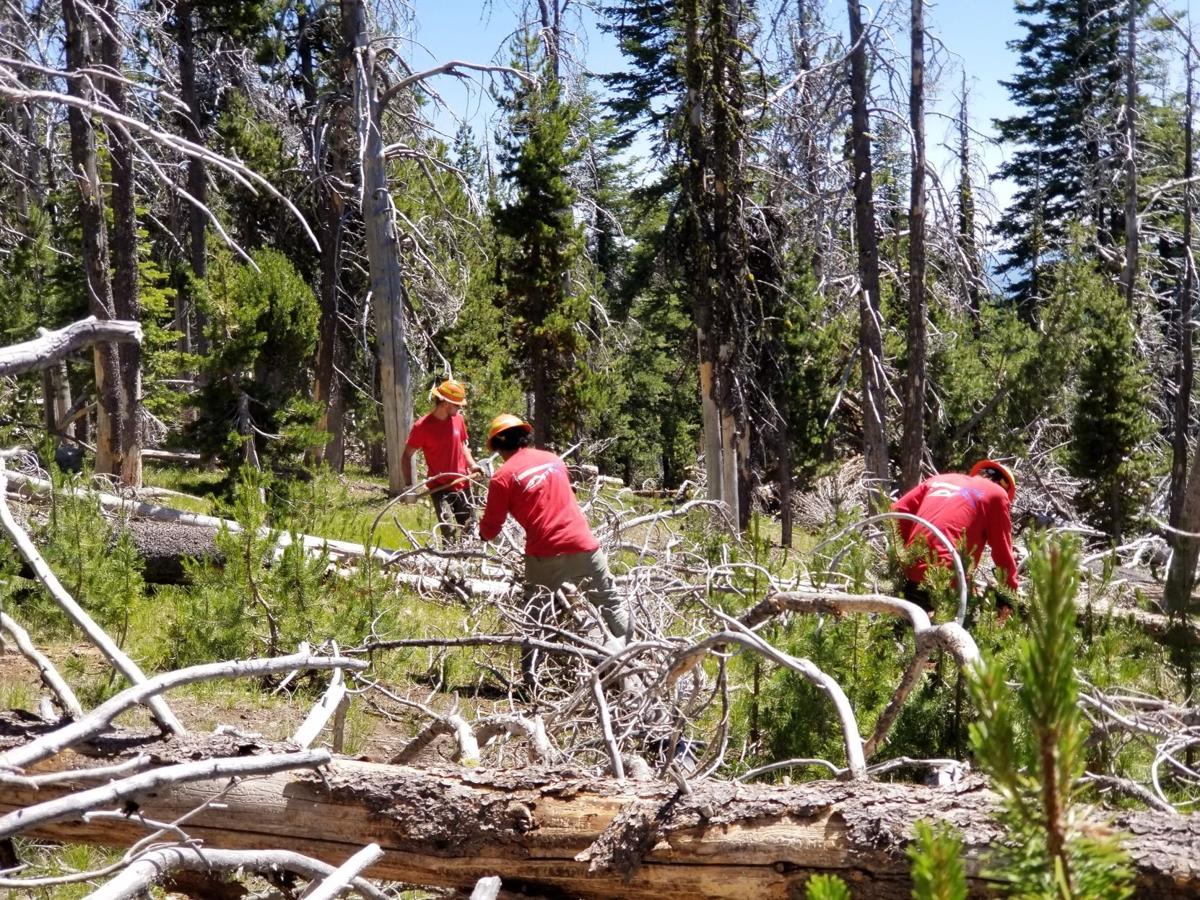 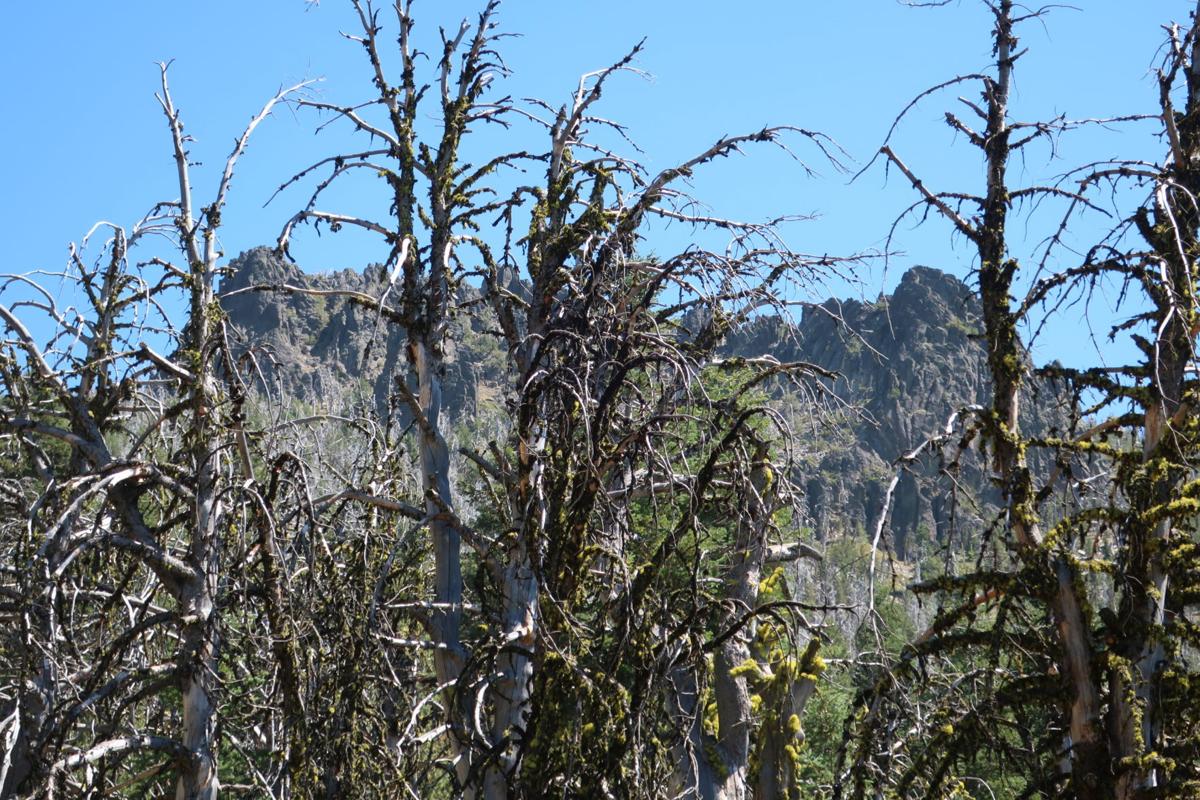 Remnants of a past fire are visible along the Deming Creek Trail.

Gearhart Mountain towers high in the distance above the Deming Creek Trail.

Remnants of a past fire are visible along the Deming Creek Trail.

Actually, there was a good reason for that feeling. Because it was more than three miles — much more.

The pamphlet “Wilderness Trails on the Fremont-Winema National Forest,” describes the hike from the Deming Creek Trailhead to the summit of Gearhart Mountain as 3.1 miles. That’s true, but there’s another 3-plus miles that’s unaccounted for, one that Niel Barrett, my hiking guru, and I were aware of.

In 1999 the former road to the trailhead was decommissioned and closed as part of a project to protect bull trout habitat. The trailhead was relocated nearly 3.5 miles downstream, more than doubling the distance to Gearhart’s summit trail, but the pamphlet doesn’t mention that. (It’s a helpful guide, but under the North Fork Trail description, it instead has information on the Mountain Lakes Trail in the Mountain Lakes Wilderness.)

From its current starting point, the Deming Creek Trail (also known as the Boulder Springs Trail or Trail #101) offers a spacious parking area that accommodates horse trailers and includes a corral. The trail to the old trailhead rumbles up and down above mostly unseen but often heard Deming Creek and, sometimes frustratingly, above and alongside the abandoned road to the old trailhead.

By whatever name — Deming Creek or Boulder Springs — the trail takes on new life from the old trailhead and a still-standing kiosk. The trail follows the southwestern flank of Gearhart Mountain’s most distinctive feature: The Notch. It’s a massive cleft at an elevation of 8,370-feet, making it the mountain’s true summit.

The Deming Creek Trail is seldom traveled by hikers and, because of the parking and corrals, better favored by people on horseback. But until recently, finding and following the trail was a challenge.

After a six-year struggle, Fremont-Winema wilderness trail workers finally opened what had been a hidden, vegetation covered route. Anthony Benedetti, who oversees the crew, said it took three seasons to find and clear the trail beyond Boulder Springs, one of the area’s scenic highlights about four miles from the new trailhead. Benedetti said crews removed about 800 trees.

“I credit it to the years of hard-working crews,” Benedetti said of opening the trail earlier this year. This year’s group, one he calls “exceptional” and proudly terms “gluttons for punishment,” includes Will Brain, Victor Castaneda and Issac Storm Helvey

Benedetti also credits the High Desert Trail Riders, who packed in decking for a new bridge outside the wilderness boundary and carted supplies that allowed the “Recking Crew” to overnight along the trail.

“For five or six years I’d been wanting to do that, but I got spanked every time. It’s a rugged trail. It’s a rugged wilderness,” Benedetti says of the Gearhart, a wilderness area that he says “challenges my skill set.”

We didn’t get spanked, but we were working hard. Sections climb at challenging grades and, in the early miles before the wilderness boundary, include some rocky, dusty sections heavily vegetated with fast-growing ceanothus. The trail takes on new vigor beyond the old trailhead, making several creek crossings where on the return hike we eagerly — and thirstily — refilled our dwindling water supplies.

Sections along and near Boulder Spring were also alive with wildflowers. It included rangers buttons, pine drops, lupine, buckwheat, delphiniums, monkeyflowers and, more dramatically, towering six-feet and taller clumps of corn lilies. Other sections of the trail angle alongside lush meadows and across fields of cracked lava flows, including lichen-encrusted rock outcrops. Stands of lodgepole and white fir gave way to pockets of ponderosa pine, sugar pine and incense cedar.

The hike up, with only brief breaks, took about 4.5 hours. After devouring our sandwiches, fruit and energy bars lunch, we cut the time by an hour on our return to the trailhead.

To echo Benedetti, the Deming Creek/Boulder Springs Trail challenged our skill sets and stamina. Instead of a six-mile roundtrip, we got more than double the distance.

Getting to Deming Creek