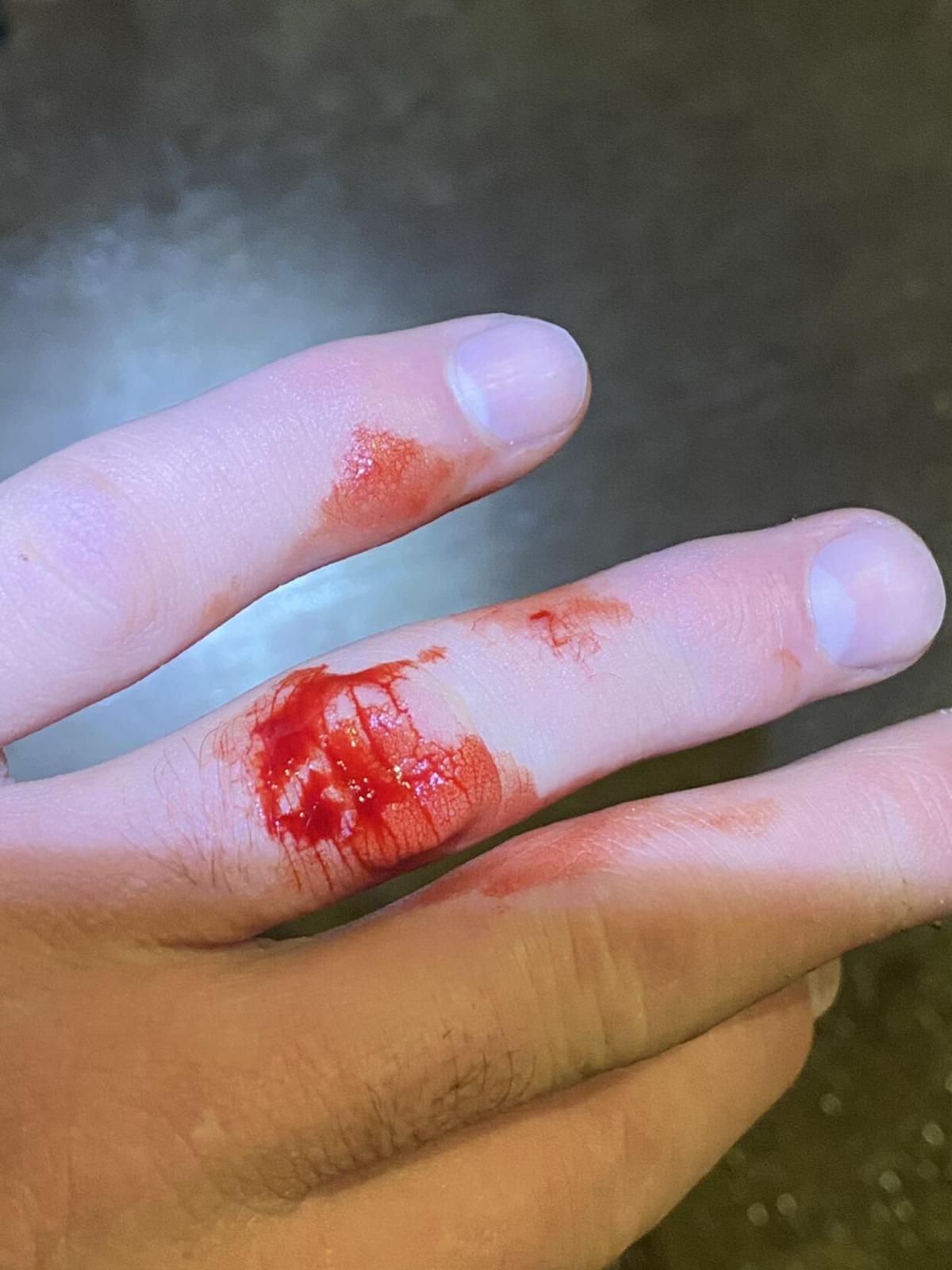 An aggressive eel took a bite out of the author's hand as he tried to release it. 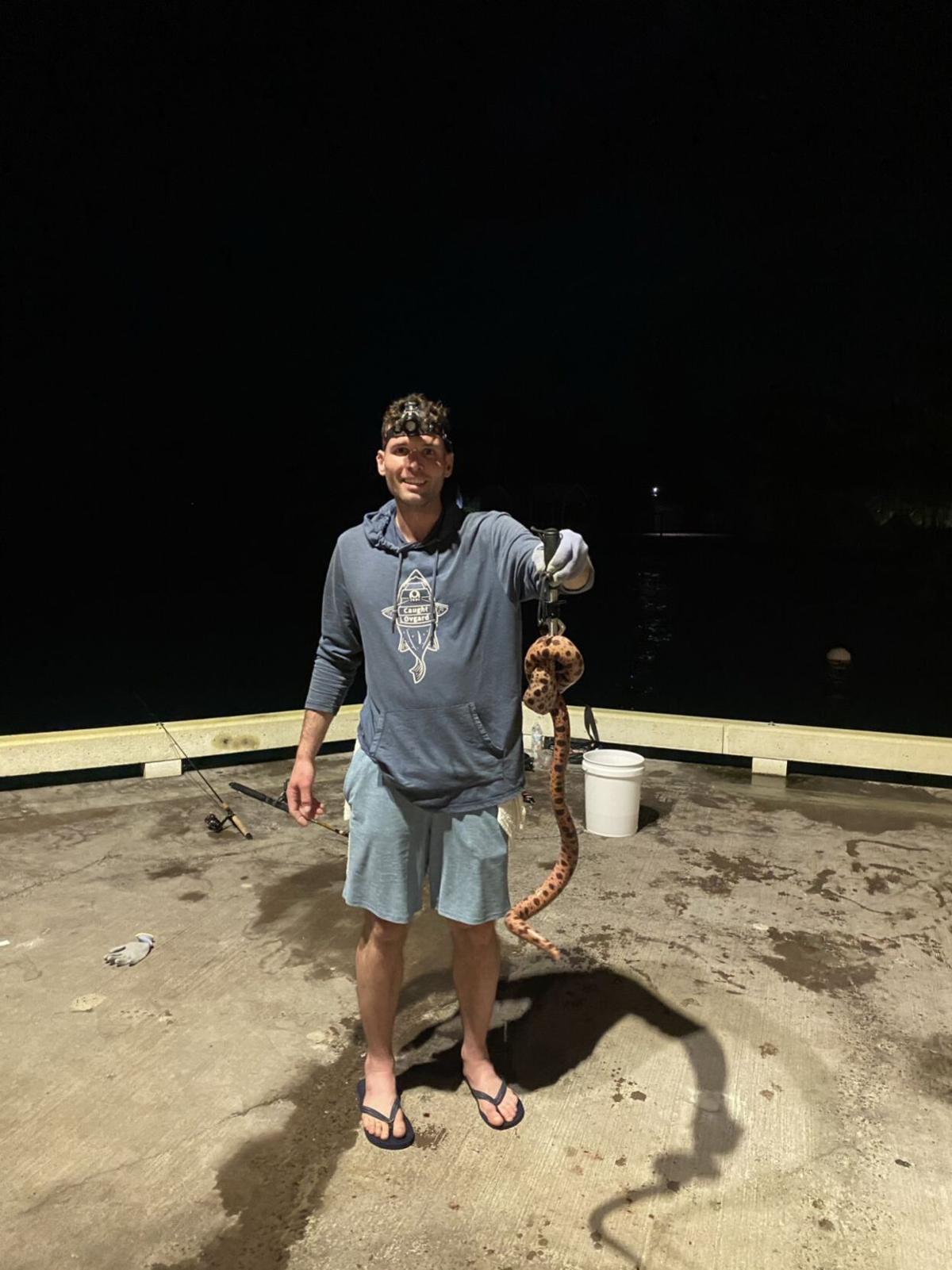 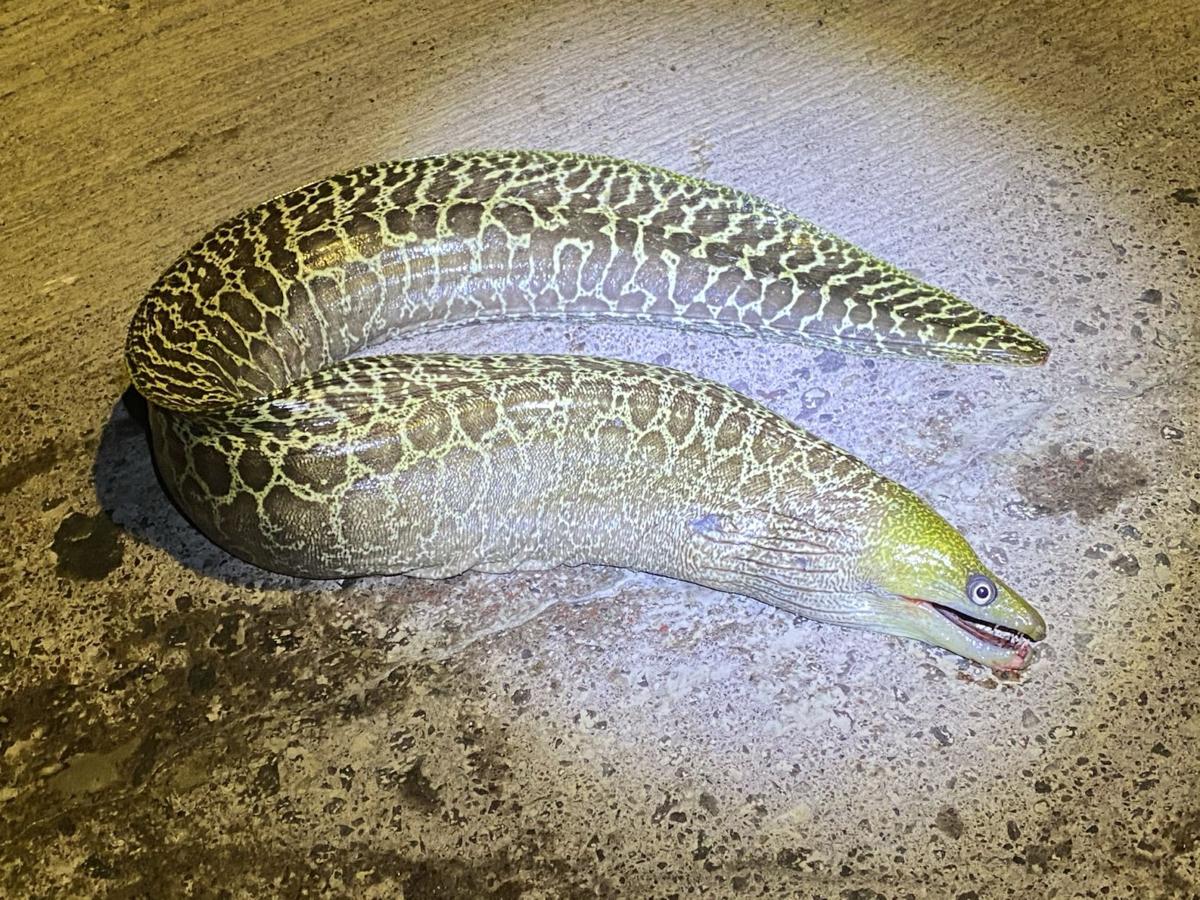 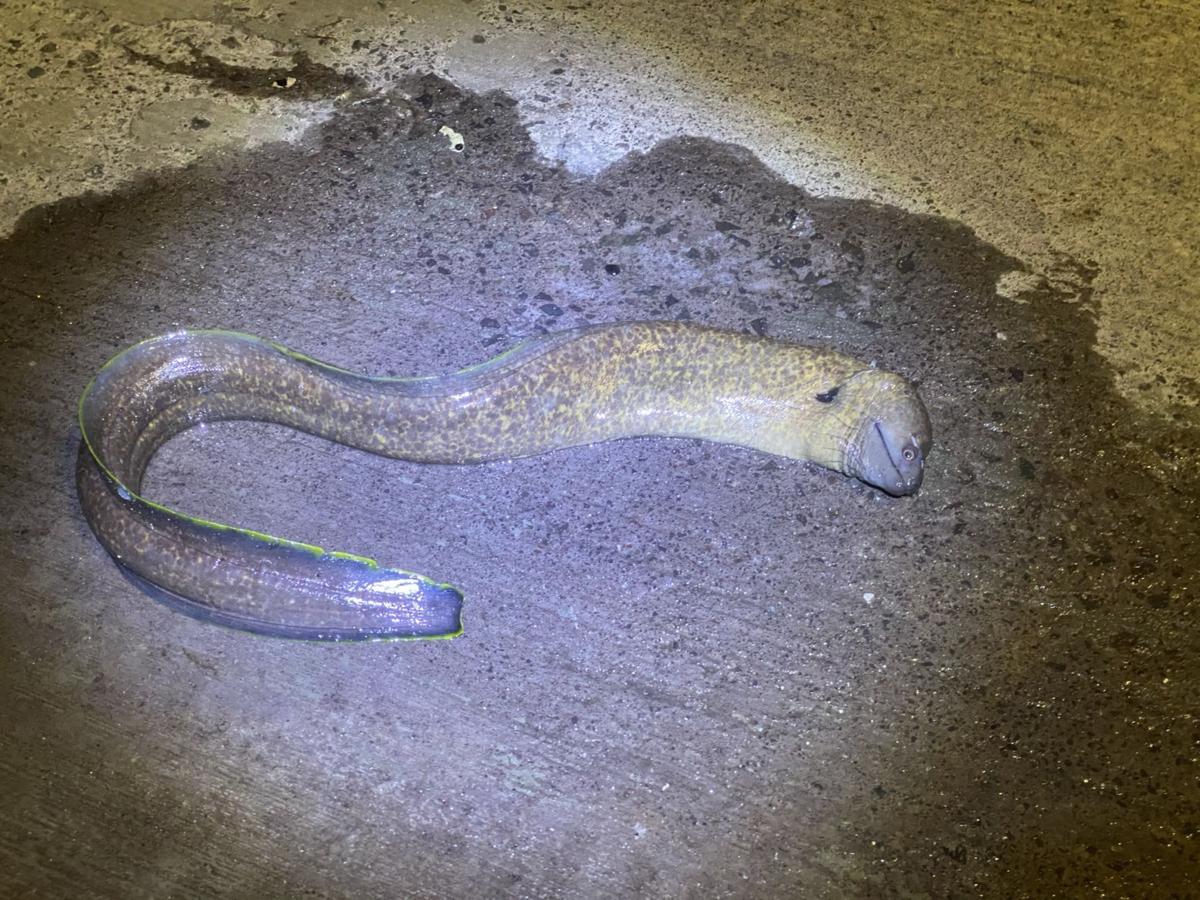 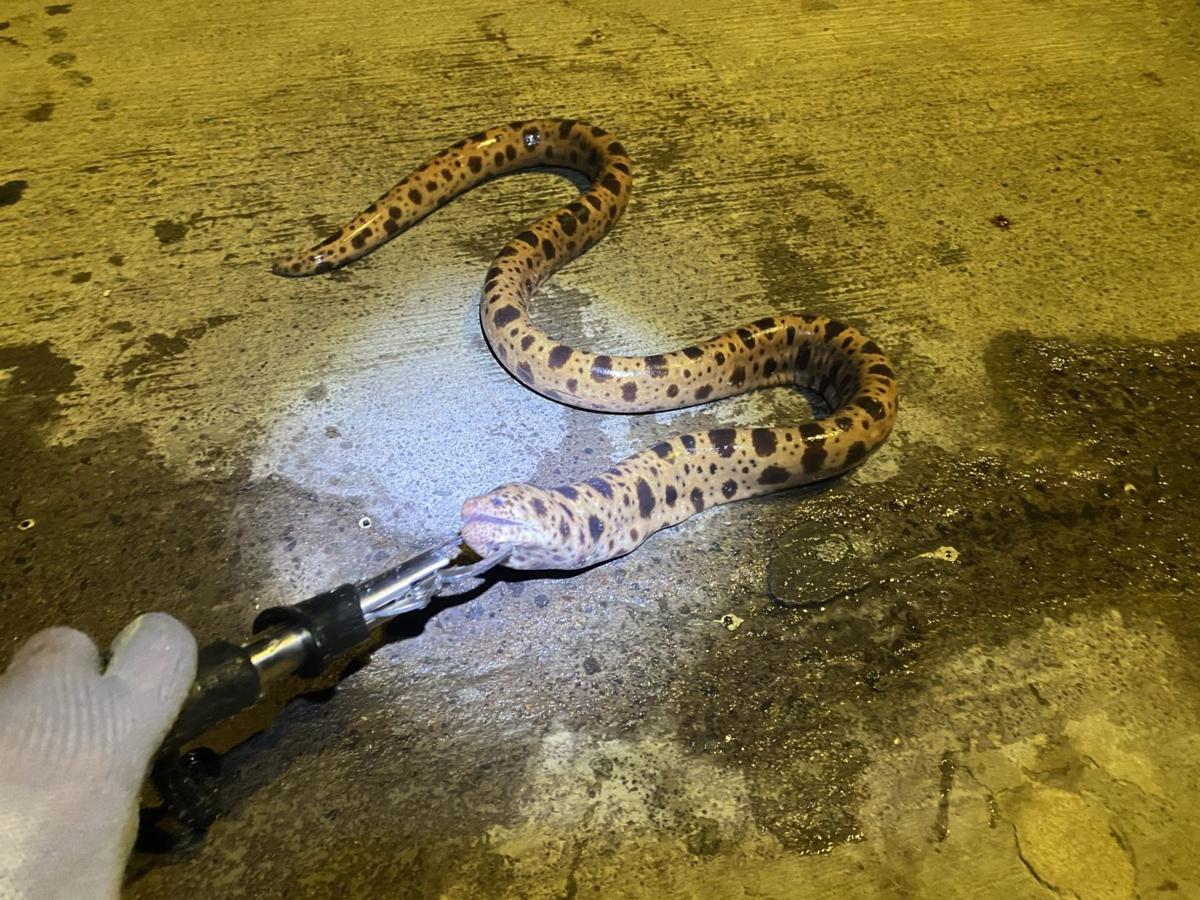 KAILUA-KONA, Hawaii— The bite was far from traditional. There was no tap-tap on the rod tip, no line ripping off the reel — just a slow, determined pull downward. I reeled in the 20 feet of line dangling from the ultralight rig in my hands, as I made my way over to the heavier rod getting bit.

I looked down at the hideous mustard setup I’d purchased for $70 almost a decade before as a boat sturgeon rod. I paired the aptly named Ugly Stik Tiger with a now-discontinued Cabela’s Salt Striker 5000 reel for $50. It is by far my least expensive rod/reel combo, but it didn’t seem to know or care. I’d caught dozens of sharks, sturgeon, jacks, barracudas, grouper, rays, lingcod and other fish over the years.

Picking up the rod, I tightened the drag almost as much as it would bear, arched my back and attempted to pull the culprit up with my 80-pound braid. Instead of gaining ground, the eel retreated further back into the rocks, and I realized I might be outgunned.

When I first began planning for my first Hawaiian fishing trip months before, my friend Steve Wozniak, who’d caught dozens of eels and even held several world records on various eels, warned me to take the heaviest rod I had for eels.

“No, heavier,” he’d told me when I pitched one of my lighter jigging rods.

I imagined these would be massive writhing monsters, but his largest record eel — a peppered moray — had weighed just 11 pounds, so I was skeptical. I’d caught sharks and sturgeon over 100 pounds on this rod. An 11-pound eel seemed like child’s play.

Steve had told me to tie a hook to my mainline just above a small weight, so I had done just that. I’d caught a small halfbeak, a strangely beautiful baitfish, just before the sun went down, and I was using half of it on a 7/0 circle hook to entice an eel right at the base of the pier. I’d made it to hookup, and I was now trying to seal the deal. A short battle later, and I was able to wrench the eel from its hole and bring it up onto the small pier a few feet above the water. It wasn’t even close to 11 pounds, and I felt pretty emasculated.

It was a mean thing, and I quickly identified it as a greenhead moray, the most notoriously aggressive of the 80-plus eel species found in the Hawaiian Islands. I’d purchased heavy-duty gardening gloves with thick wool backing and thicker rubber palms and a lip gripper just to handle eels. I’ve never used either on other fish, but eels are both incredibly resilient and incredibly dangerous, so serious eelers don’t go anywhere without them.

The eel came free quickly, but I wanted a picture of it before I released it to prove my insanity in trying to catch it. It impolitely said no.

In horrific fashion, it coiled and repeatedly lunged at my bare feet like a snake. I looked all sorts of clumsy as I tried to get a grip of it, but I failed. Figuring the glove would keep me safe, I attempted to grab it right behind the head. I succeeded, but only for a moment before the 2-pound fish slid free, turned its head and chomped down on my left hand, ripping through the gloves.

Pain flared in three fingers, as I regretted my life choices that night. The blood fueled an adrenaline surge, and I got my picture before letting it go to terrorize the fish living in the shadows of the pier.

Only then did I peel my now-blood-soaked glove off and assess the damage. Four deep tooth marks had struck glancing blows on my pinky, ring and middle fingers. Thanks to the glove, I’d avoided stitches, but they were still substantial enough to soak the glove in blood. I counted my blessings even as I failed to learn from my actions and dropped the now-mangled halfbeak back into the water.

A larger but much less aggressive yellowmargin or yellow-edged eel obliged me next. I got a photo without any injuries and felt confident enough to try a third drop as I used my ultralight to keep busy with small squirrelfish and cardinalfish.

The third take was more subtle, but I reared back and did battle for several minutes with my final eel of the night. The leopard-spotted eel was unfamiliar to me, but I took pictures with it nonetheless. Whatever it was, I knew the world record was vacant, so I carefully placed it in a bucket full of saltwater to rest as I prepared to take measurements.

When I grabbed it with my lip gripper and attempted to lift it from the bucket, it coiled to the shape of the bucket and spun its lower half in perfect circles like the scene from “The Exorcist” but slightly more horrifying in the wan light of the pier.

I shuddered before measuring it and getting a rando to snap a few pictures for me. It measured 49 inches long but given it’s slim body type, weighed just under three pounds. I released it painlessly.

My rod choice seemed apropos as I paged through my field guide later that night and identified it as a tiger reef eel, a fish almost never encountered by anglers. I was pretty proud of myself and my beat-up old eel rod that night, thinking “Good job, tiger. Good job.”