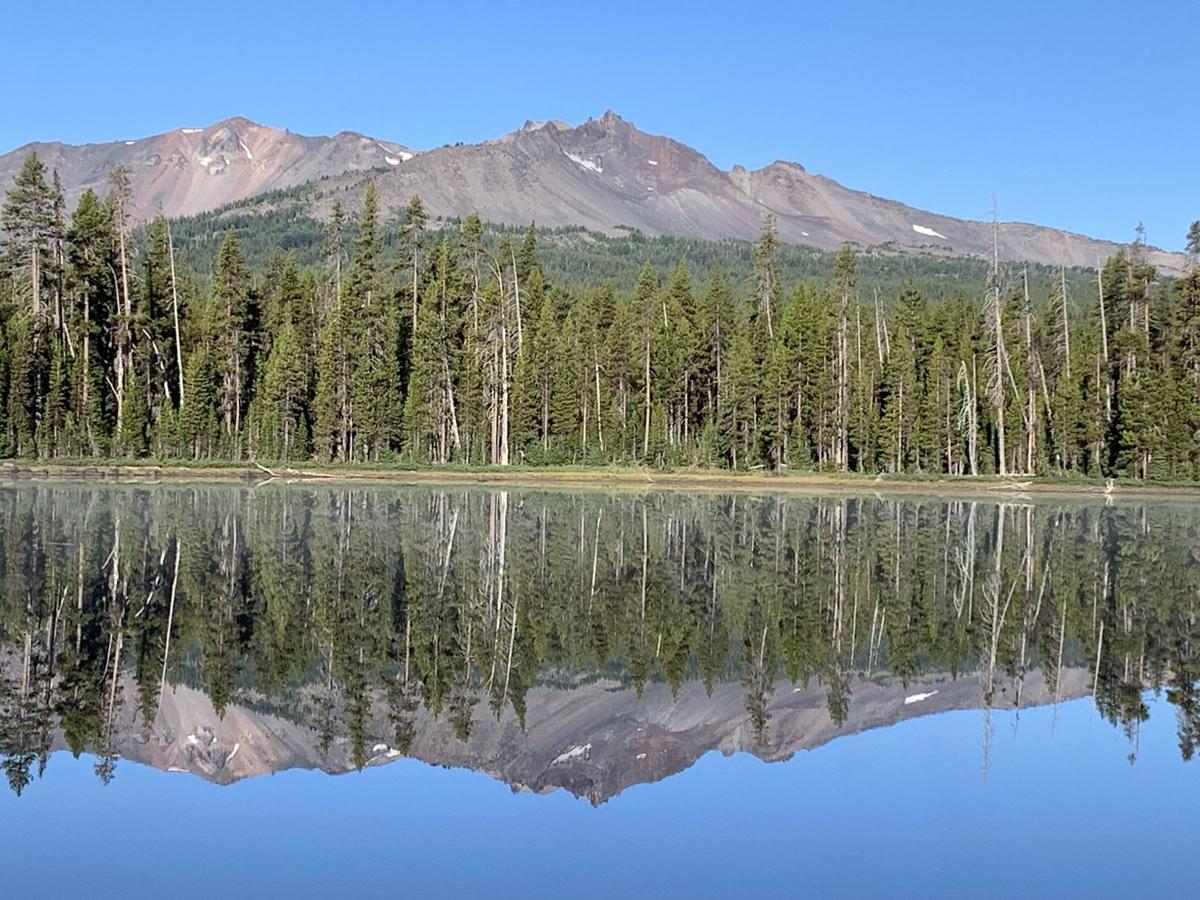 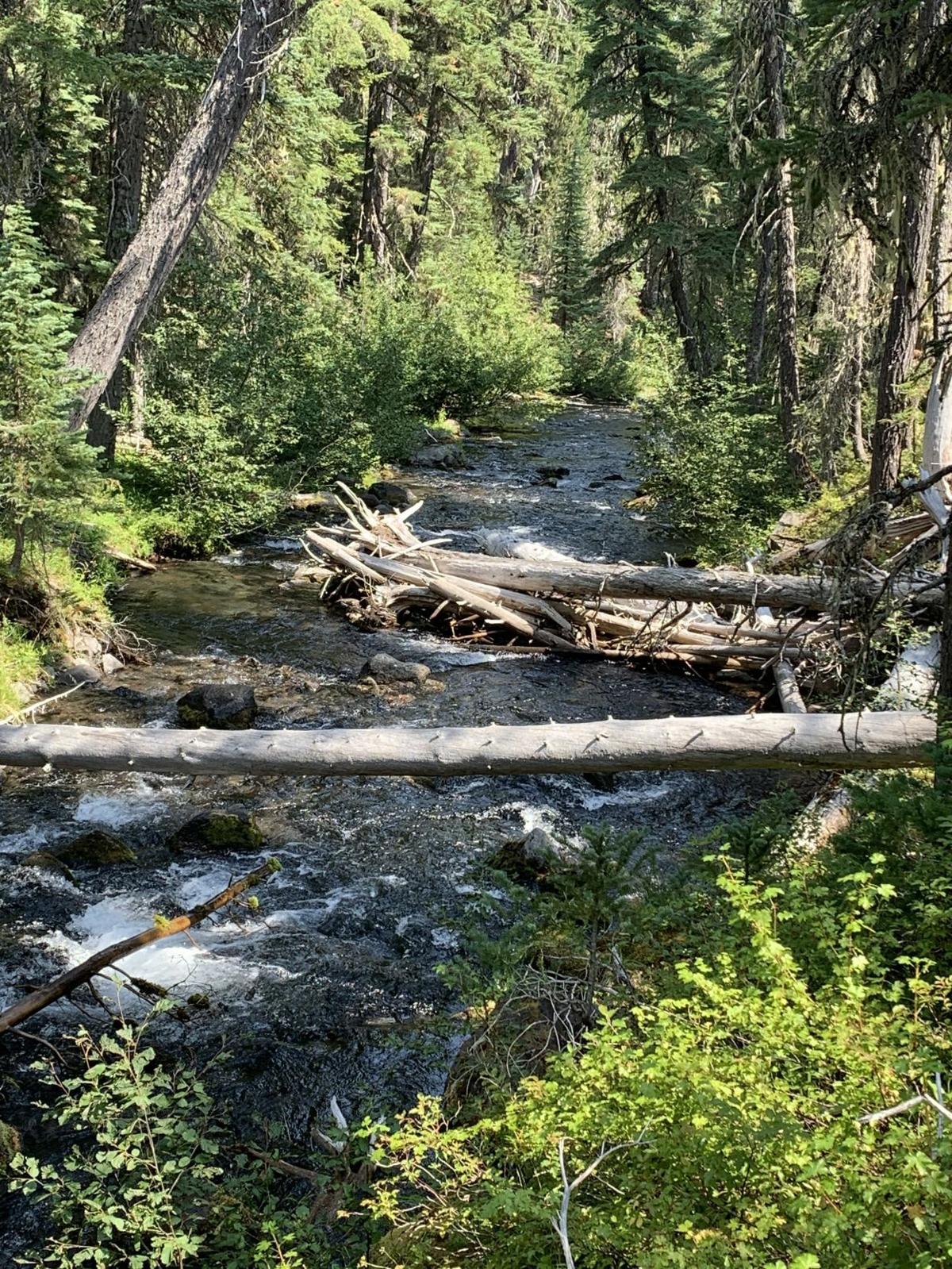 A portion of the Trapper Creek Trail parallels the bubbling creek. 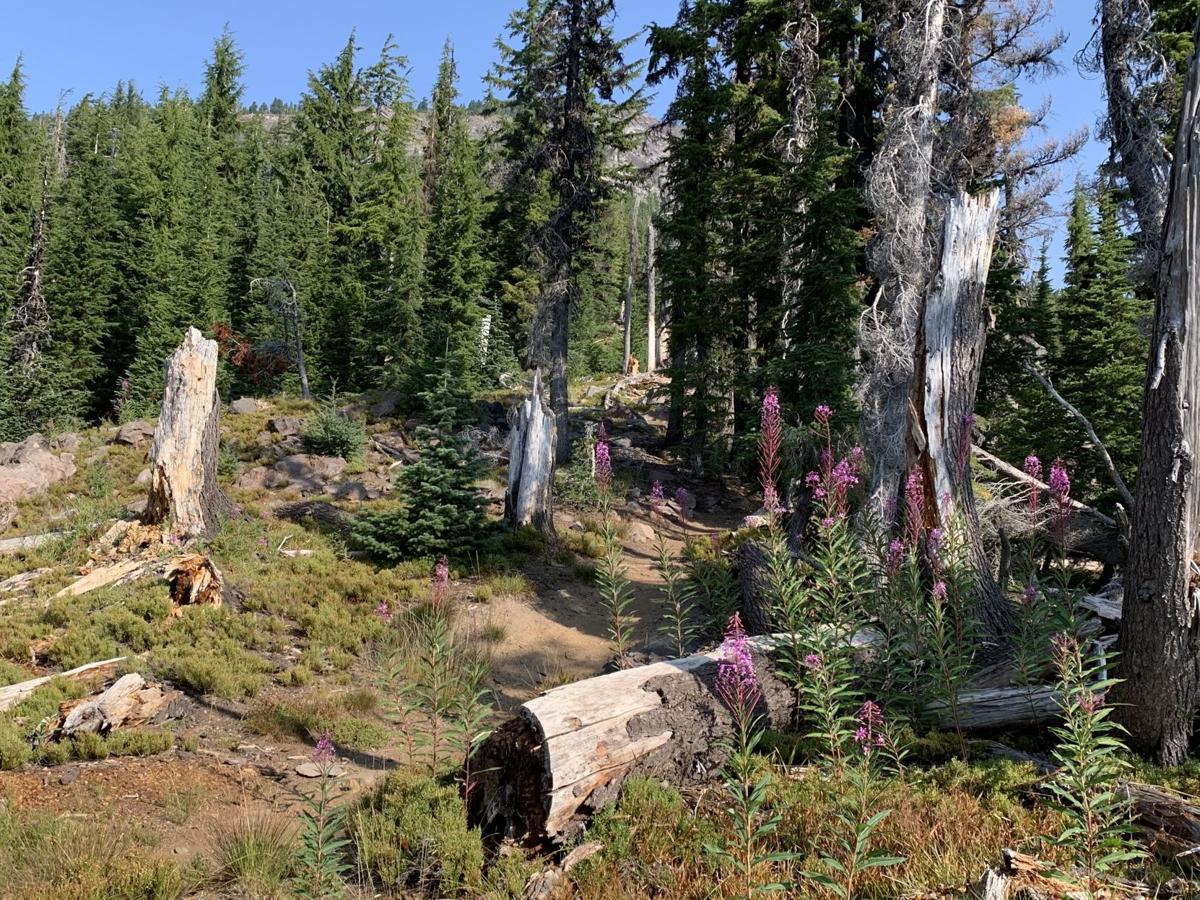 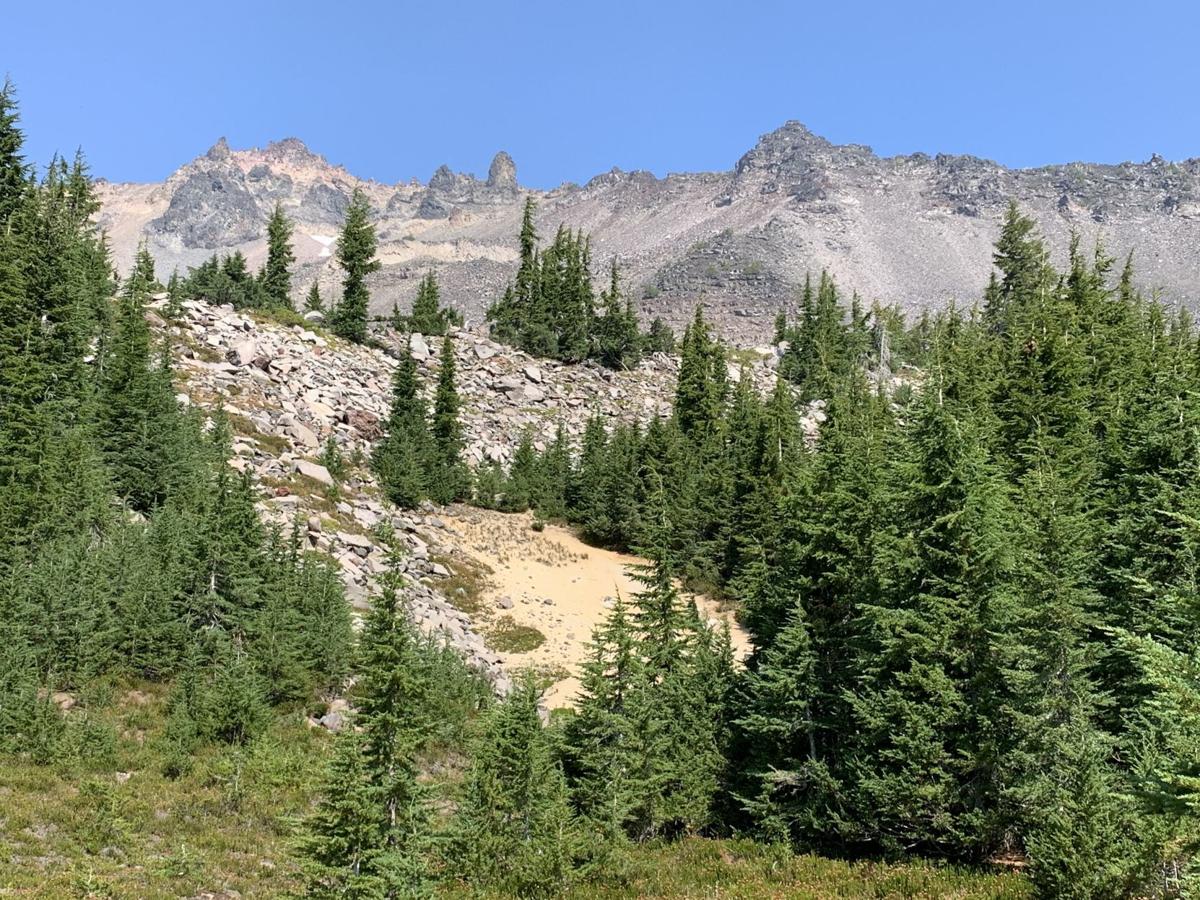 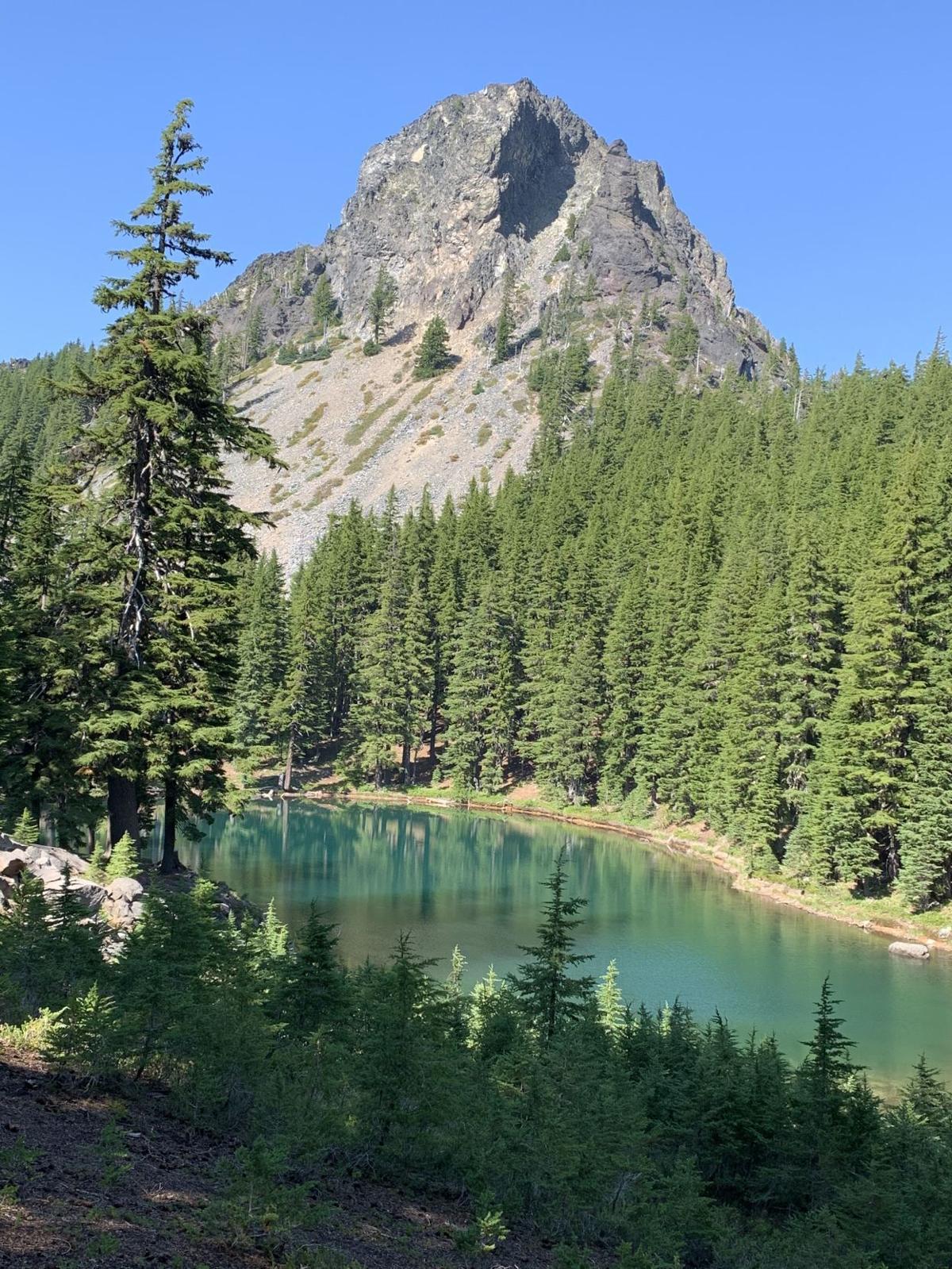 Yoran Mountain towers over the waters of Divide Lake. 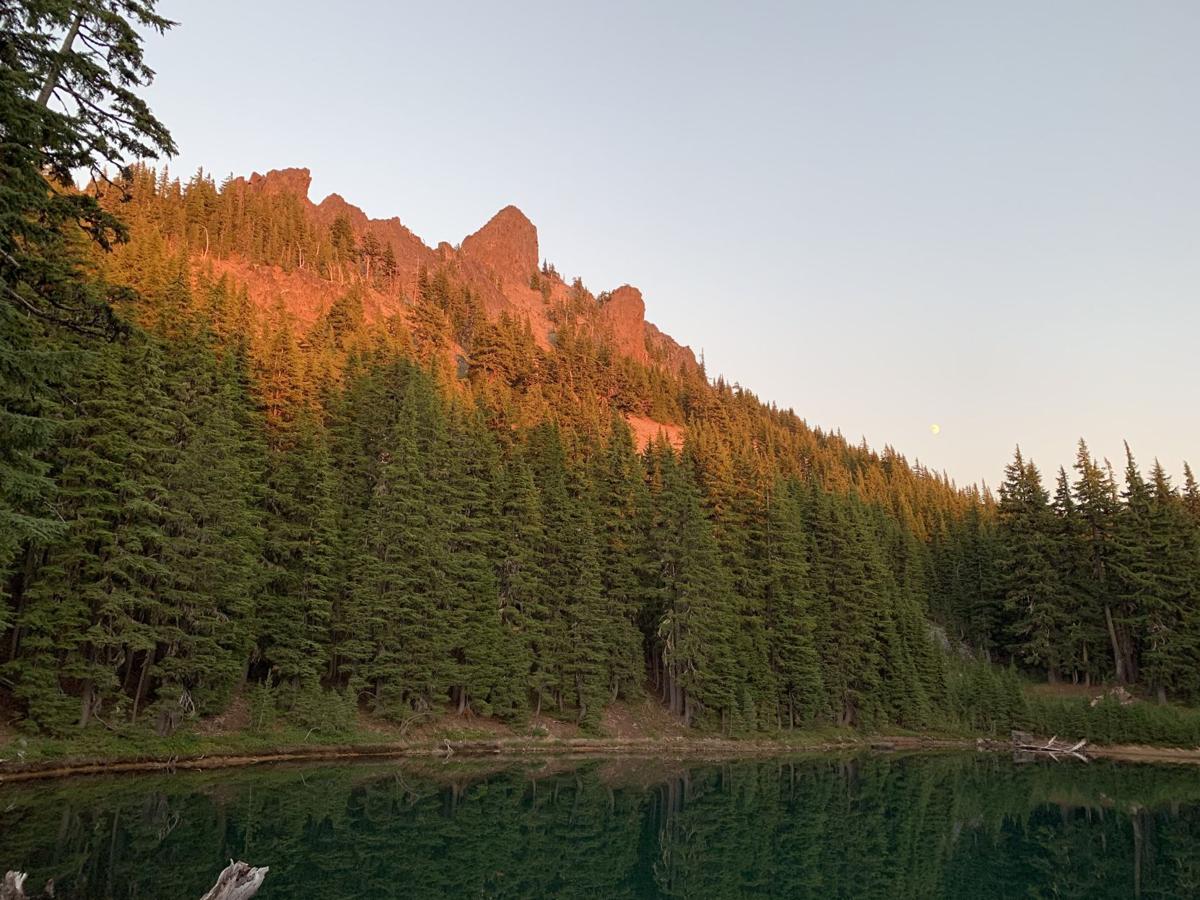 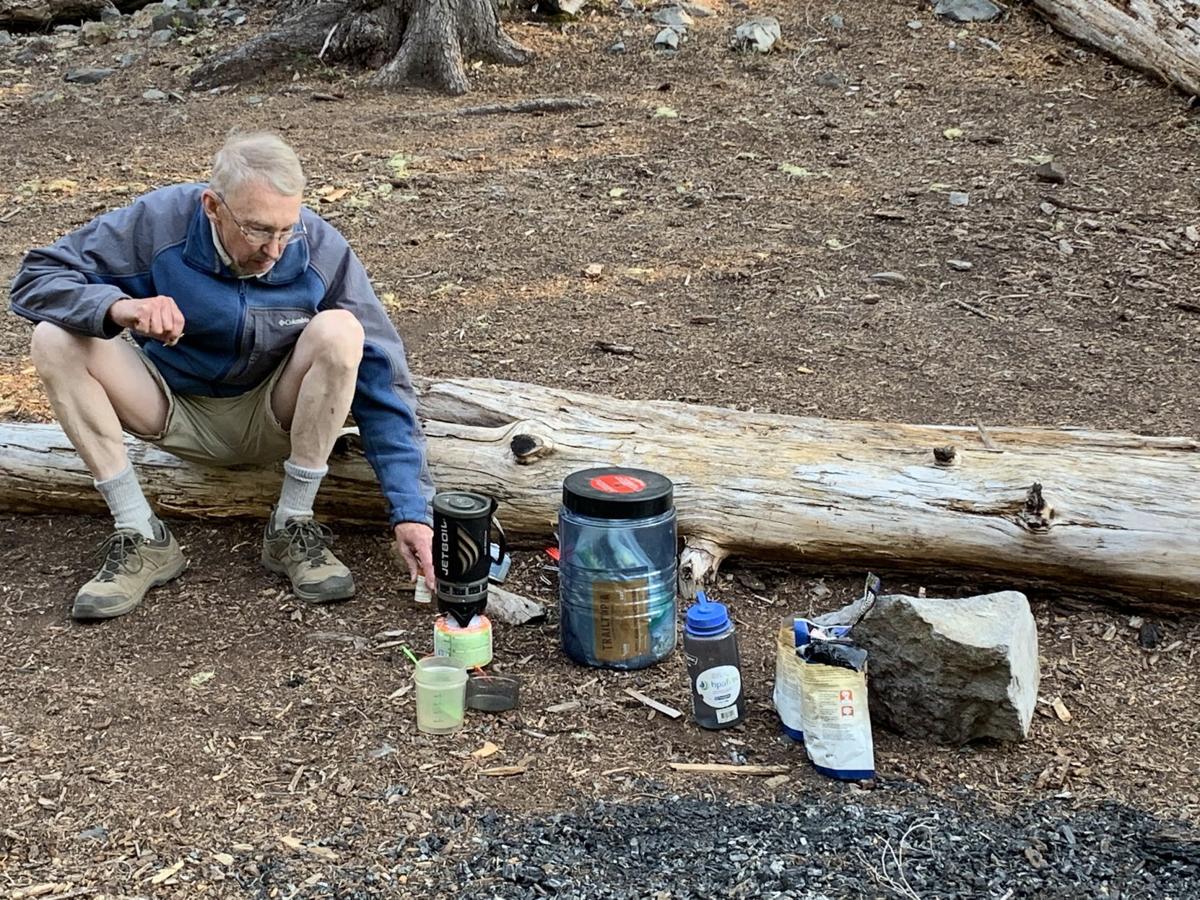 A portion of the Trapper Creek Trail parallels the bubbling creek.

Yoran Mountain towers over the waters of Divide Lake.

ODELL LAKE — It began with a berry-picking bear and ended with a bear hug.

Steve Underwood and I had just struggled into our backpacks loaded for a five-day trip into the Diamond Lake Wilderness. As I started to walk towards the railroad tracks that separate the parking area near Odell Lake’s Shelter Cove Resort from the actual trailhead a black bear appeared. It was slowly ambling through the brush, probing for huckleberries. It stopped long enough to look at me looking at him. Shortly after I yelped, “Stevie! Bear!” it nonchalantly disappeared into thickets.

Quite the introduction to a trek that had barely started.

We saw no more bears during our trip. Once across the railroad tracks, we bore left at a junction that offered choices to the Pacific Crest Trail, Yoran Lake Trail and the Trapper Creek Trail, which was the route we took.

The first several miles alongside tumbling, rumbling Trapper Creek was pure delight, with sights and sounds of the creek through a forest of bearded trees, including hemlocks, white firs, Douglas fir and, closer to Diamond View Lake, picket lines of lodgepole pines.

After about 5.5 miles we left the trail for a campsite on Diamond View Lake’s west side. It was our home the next two nights. The day after we arrived a day hike took us 10-plus miles past Saddle Lake to beautiful Stag Lake. There the views of cliff-faced Lakeview Mountain were, appropriately, staggeringly dramatic.

The afternoon of our Diamond View Lake arrival, I ventured into its waters for what I hoped would be a refreshing swim. Easier said than done.

Diamond View, like other lakes we passed during our days, is water starved. The shoreline was quicksand-like muck. Plodding out to water deep enough for swimming was sloppy. For more than 50 yards offshore the lake level was only inches deep, but my feet sunk in the glop to my ankles and knees.

After my swim, as I returned to shore, dragonflies flew like F-15 fighter jets, zooming just inches away from my face, seemingly on reconnaissance patrols.

After two nights at Diamond View, with no attempt for a second swim, it was 6-plus miles to Rockpile Lake.

Portions of the forested trail, like sections to Saddle and Stag lakes, were littered with fallen trees, making them good training areas for steeplechase runners. Based on the well-trampled side routes around many of them, it’s been years since many have been cleared.

On the way we paused aptly named Mountain View Lake, pausing to enjoy its dizzying views of the craggy, serrated ridges that are part of Diamond Peak.

We had our choice of Rockpile or Marie lakes, but chose Rockpile at the recommendation of backpackers we met at Diamond View. There were no obvious rockpiles, but the swimming was excellent in the lake’s deep, clear blue-green waters.

The trail from Rockpile Lake to Divide Lake, another 7-1/2 miles, mostly follows a section of the Pacific Crest Trail. The PCT seemingly gets priority treatment for trail maintenance because of its high volume of through and section backpackers.

We cruised through forests before Diamond Peak came boldly into view. Having hiked the John Muir Trail, it felt like traveling back in time, with sweeping, panoramic views much like the saw-toothed peaks and glaciated ridges of the Sierra Nevada high country.

Diamond Peak, with a summit of 8,744 feet, is a young (less than 100,000 years old) shield volcano with heavily glaciated sides. Its true summit is flanked by three lesser summits, which geologists say consists of mostly basaltic andesite.

It was another 8-plus miles to Divide Lake, a short, steep up-and-down detour off the PCT. The rewards included breathtaking views of Mount Yoran, a 7,100-foot volcanic plug that towers like a massive thumb above the lake. Geologists explain that Yoran is an eroded shield volcano composed of basalt and andesite.

The views were jaw-dropping, and so was swimming in the lake’s refreshing waters. Divide Lake is so named because one large lake was hundreds of years ago divided into two smaller lakes.

Our final day began with a return to the PCT and, in about two miles, a signed trail to Yoran Lake, yet another beautiful watery gem. A lakeside opening provided yet another wide-sweeping view of Diamond Peak and its picket fence array of crenulated ridges.

We followed the Yoran Lake Trail past Lake Karen and yet another sparkling blue, unnamed lake, gradually losing elevation while weaving through stands of 6-foot tall beargrass and bear-free patches of tiny, ripe huckleberries.

As happened every other day, we passed occasional hikers, some with dogs. Preparing to greet an oncoming hiker with two dogs, I did a double-take. The hiker was my daughter, Molly. I had sent her our proposed itinerary. She had come hoping to meet us, hoping we were taking the Yoran trail, not the PCT, back to the Shelter Cove Trailhead.

The following mile-plus was filled with happy chatter through the hemlock forest and, shortly before the junction with the Trapper Creek Trail, a not-for-the-fainthearted crossing of narrow wooden bridge.

That afternoon, after Stevie and I devoured oversized hamburgers and fries at the Shelter Cove Resort restaurant, I told Molly about the rambling bear Stevie and I had seen five days earlier, just minutes after barely starting our trek.

So it was a surprise and fittingly appropriate delight when, after a COVID-19 dictated months of not touching, that my trip ended with the best of all possible endings. A bear hug with Molly.