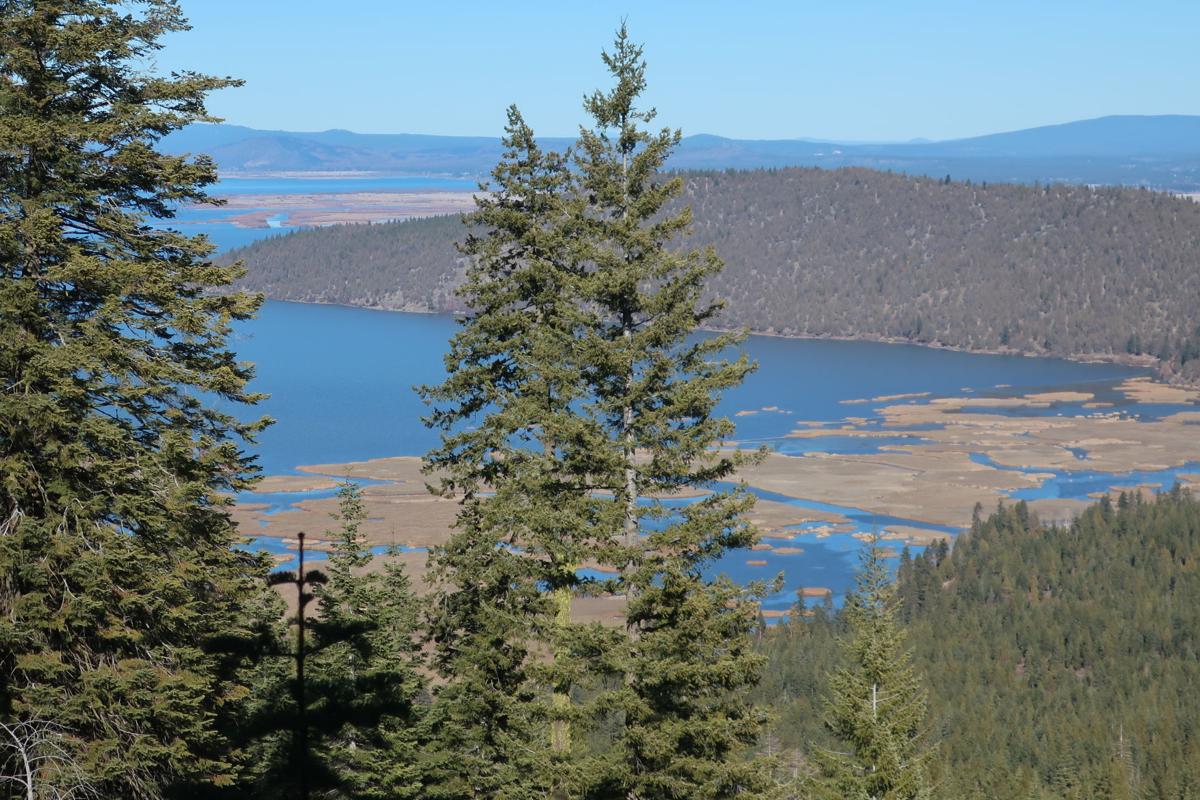 Shoalwater Bay’s marshes and Eagle Ridge can be seen from the Spence Butte Trail’s high point. 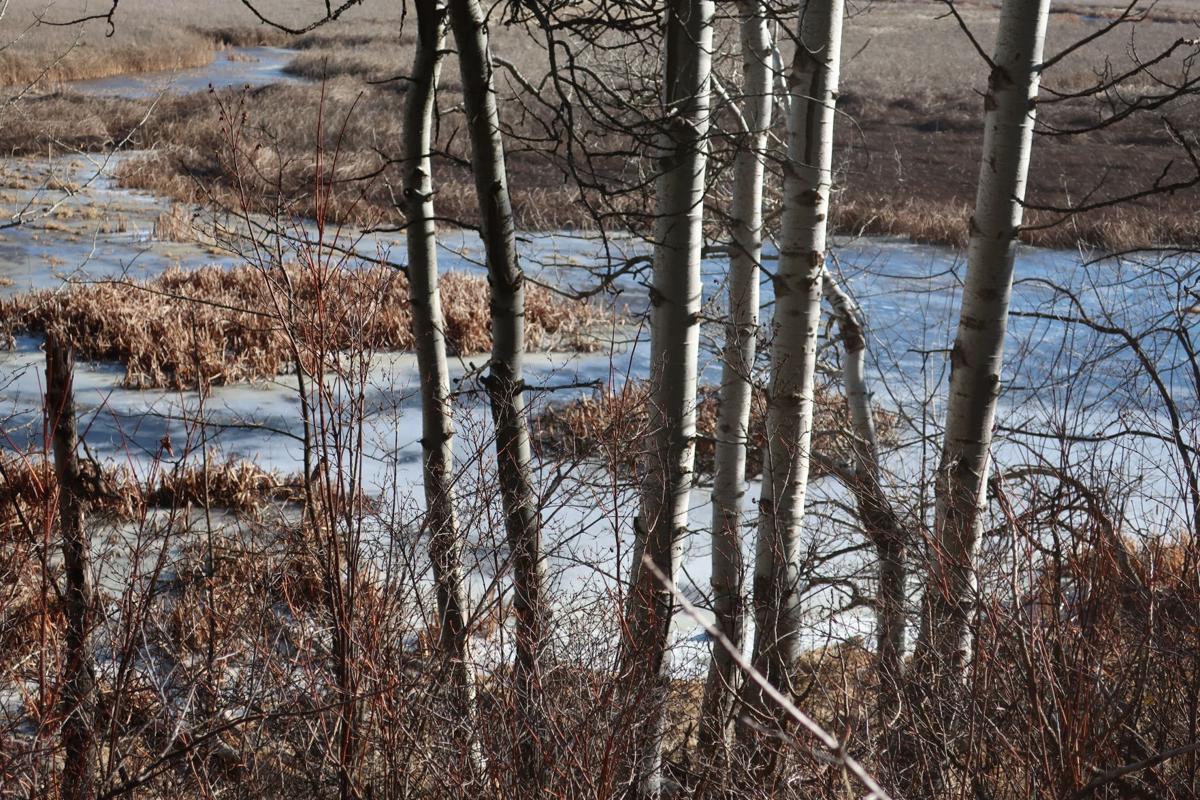 Aspens along the Mazama Trail near the Shoalwater Bay trailhead. 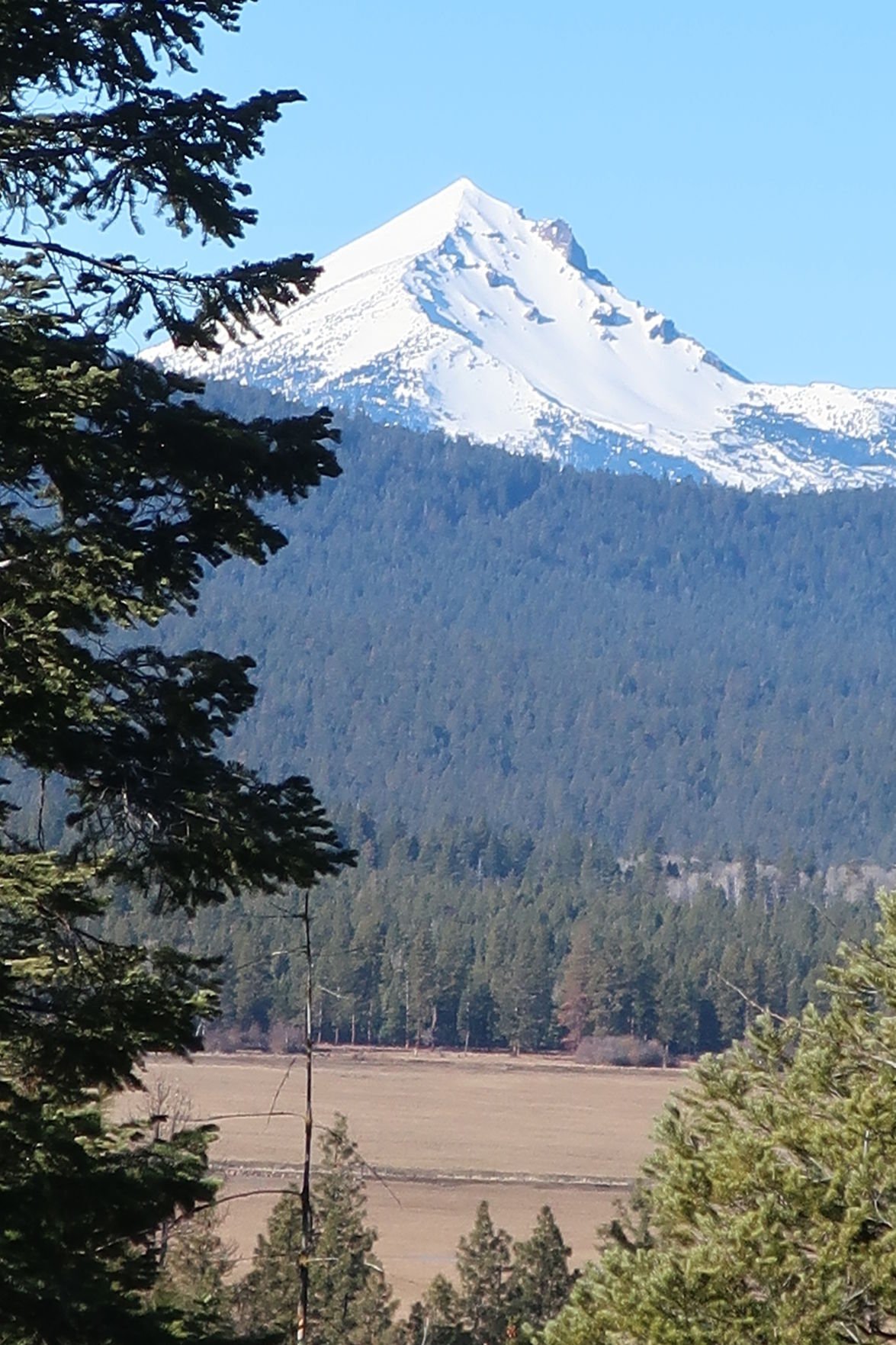 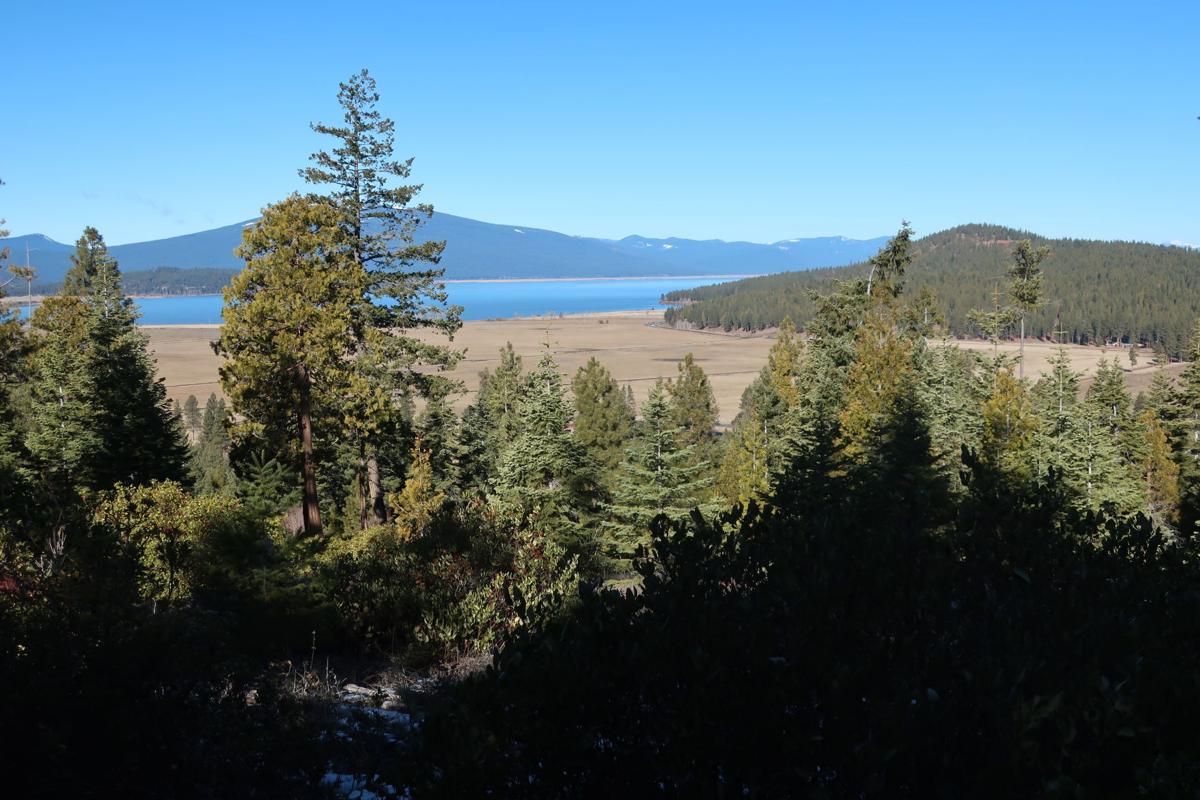 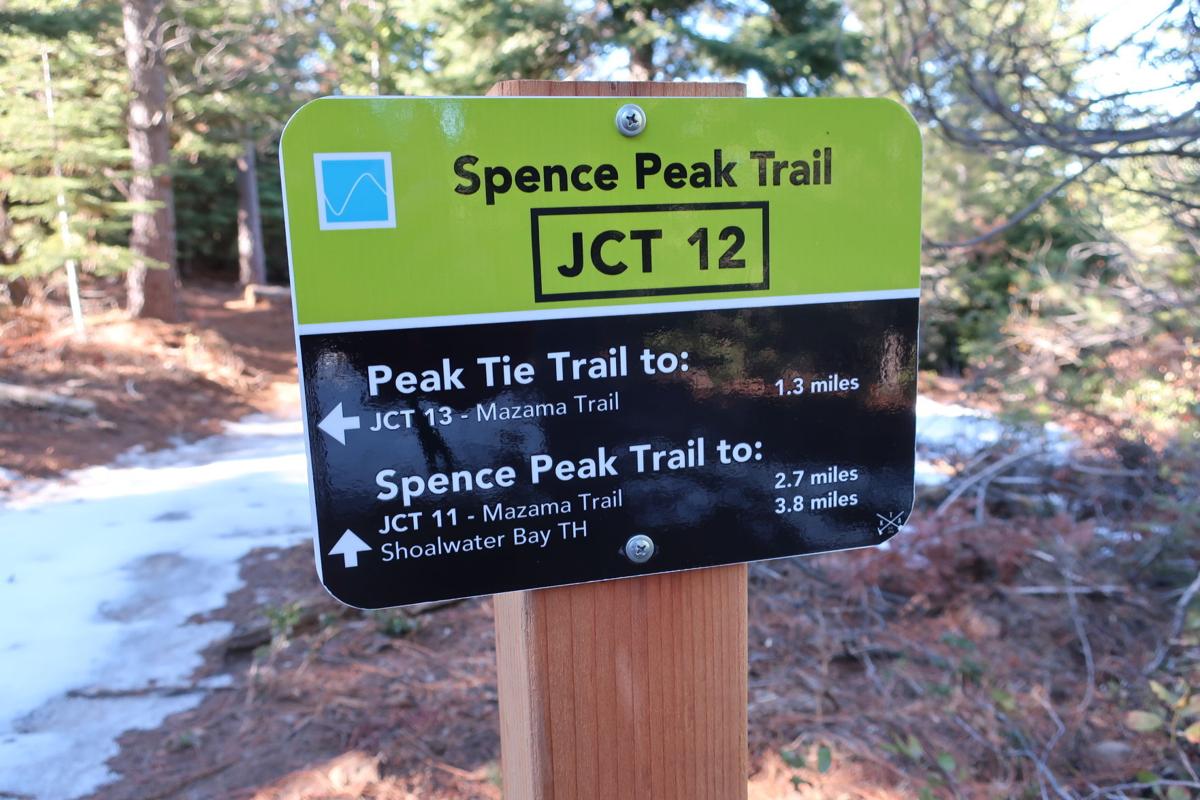 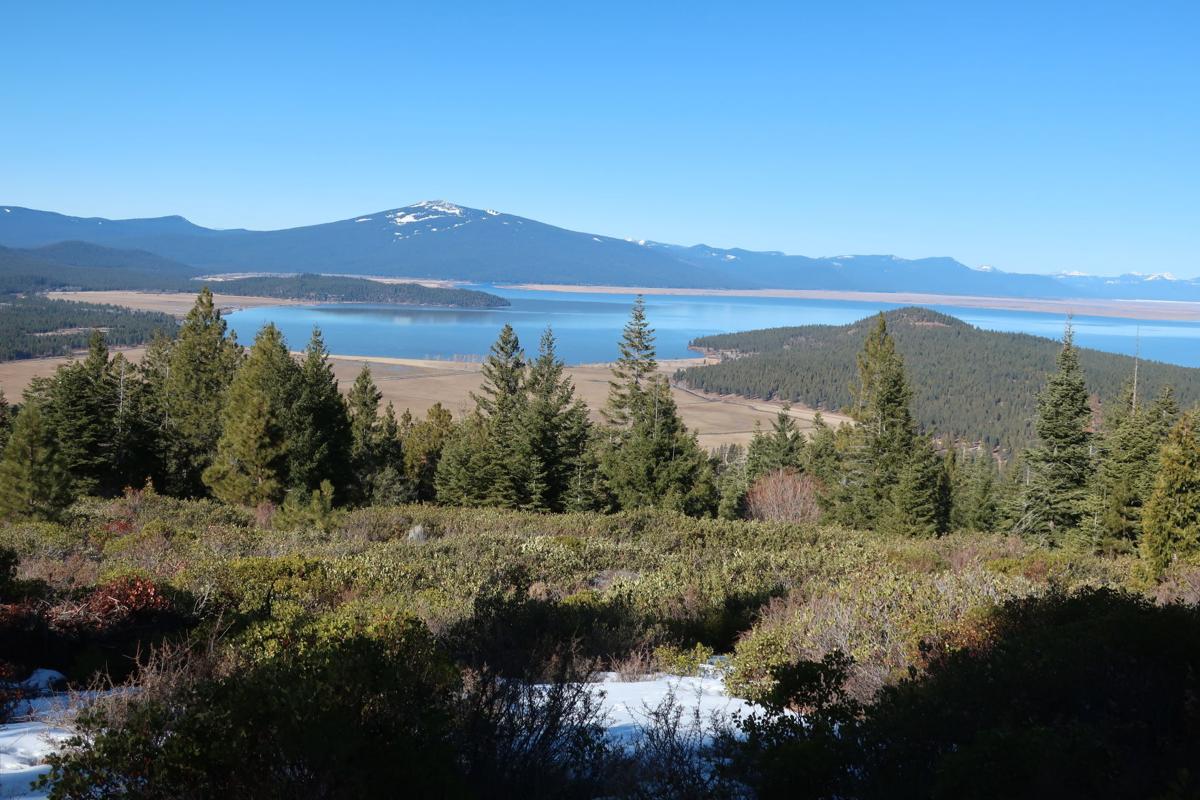 An arm of Upper Klamath Lake and Pelican Butte are visual treats on the Spence Butte Trail.

Shoalwater Bay’s marshes and Eagle Ridge can be seen from the Spence Butte Trail’s high point.

Aspens along the Mazama Trail near the Shoalwater Bay trailhead.

An arm of Upper Klamath Lake and Pelican Butte are visual treats on the Spence Butte Trail.

The original plan was to hike a very pleasant loop Spence Mountain trail that begins at the Shoalwater Bay Trailhead, follows alongside the bay, climbs gently up Spence’s west flanks, then snakes downhill back to the trailhead.

It’s a 4.5-mile hike that’s easy, pleasant and scenic. It offers up-close views of some of Upper Klamath Lake’s marshes and, from its higher perches, sweeping views of the bay, lake and mountains framing the aptly named Mountain Lakes Wilderness, along with Mount McLoughlin and Pelican Butte in the Sky Lakes Wilderness Area. It’s a hike I’ve done and enjoyed several times.

But this day, I wanted something different. Something new. Something more challenging.

A map on the trailhead kiosk showed a trail that wasn’t on my outdated Klamath Trails Alliance map. Those maps are quickly outdated, because every year the KTA adds new trails. The new trail — the Spence Butte Trail — looked intriguing and, because of its distance of about 9.5 miles, also challenging. Even more tempting, the trail meanders through a section of Spence Mountain that I hadn’t seen.

So what the heck, I decided to check it out.

While the group of Basin Outdoor Group hikers followed the Old Eagle Trail east-northeast along Shoalwater Bay, I aimed north-northwest along the Mazama Trail. The first half-mile, which I’ve previously hiked and mountain biked, closely parallels Shoalwater Bay offering ever-changing views of weather-bent aspen trees flanking the marsh and lakeshore. The trail moves inland until 1.1-miles from the trailhead it reaches Junction 11. From the junction, the Mazama Trail continues south, eventually to the Highway 140 trailhead. I took the newly built Spence Butte Trail, which was added to the ever-increasing trail network in late 2019.

It’s a trail that’s not frequently traveled, especially by hikers, partly because it’s new and, even more, because it requires a commitment. The Mazama/Spence Butte/Captain Jack/Shoalwater combination loop is about 9.5 of often up-and-down miles.

The upside of the Spence Butte Trail is that it pays immediate dividends, with expansive golly-gee-whiz viewpoints of the lake, forests, mountains and the still-snow-tipped Cascades. McLoughlin and Pelican Butte appear less frequently than from some of the other trails, but they reveal themselves more dramatically, often nestled and framed by fir, cedar and pine trees.

The 2.5-miles long Spence Trail climbs steadily, eventually reaching Junction 5. It’s a junction with possibilities, especially for mountain bikers. It connects with two intermediate trails, South Ridge and Hooligan, which aim south, eventually to the Spence Mountain Trailhead along Highway 140. The junction is also the beginning of the North Ridge Trail, a one-way, mountain bike only downhill route that’s rated difficult and, from a semi-obscured viewpoint, looked suicidally steep.

From the junction my route continued along Captain Jack. It’s nearly two miles of mostly gradual downhill, winding through a cozy forest canopy. About two-thirds of the way down, a signed side trail goes on a few yards to the Modoc Trail. Both trails converge at Junction 7W.

On reaching the trailhead the once-busy parking lot had only one other car. During my 9.5 miles I had seen no one — no hikers, no bikers. And that was fine. Because what I did see and experience was just what I wanted: Something new, something challenging.

To reach the Shoalwater Bay Trailhead, from Klamath Falls go west about 20 miles on Highway 140 toward Rocky Point.

At a signed junction near the bottom of Doak Mountain, follow a gravel road about two miles to the trailhead, which has a large parking area, outhouses and that very helpful map on the information kiosk.