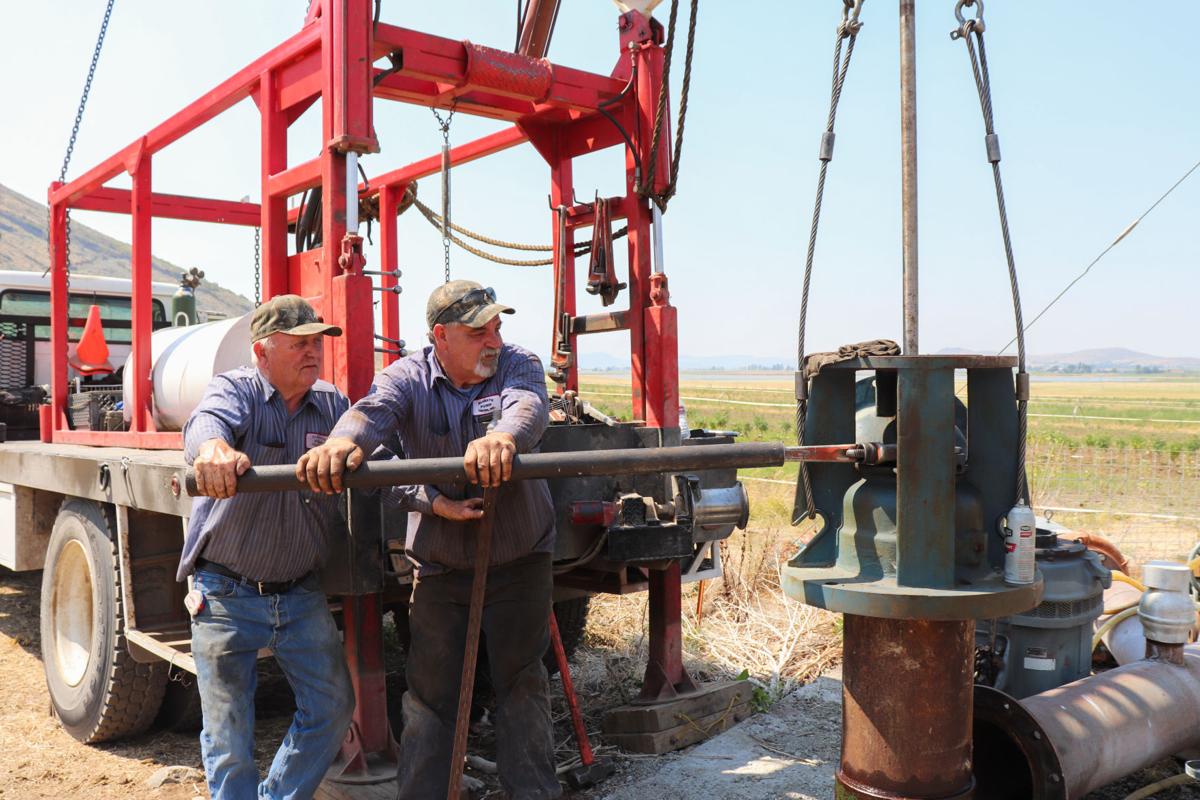 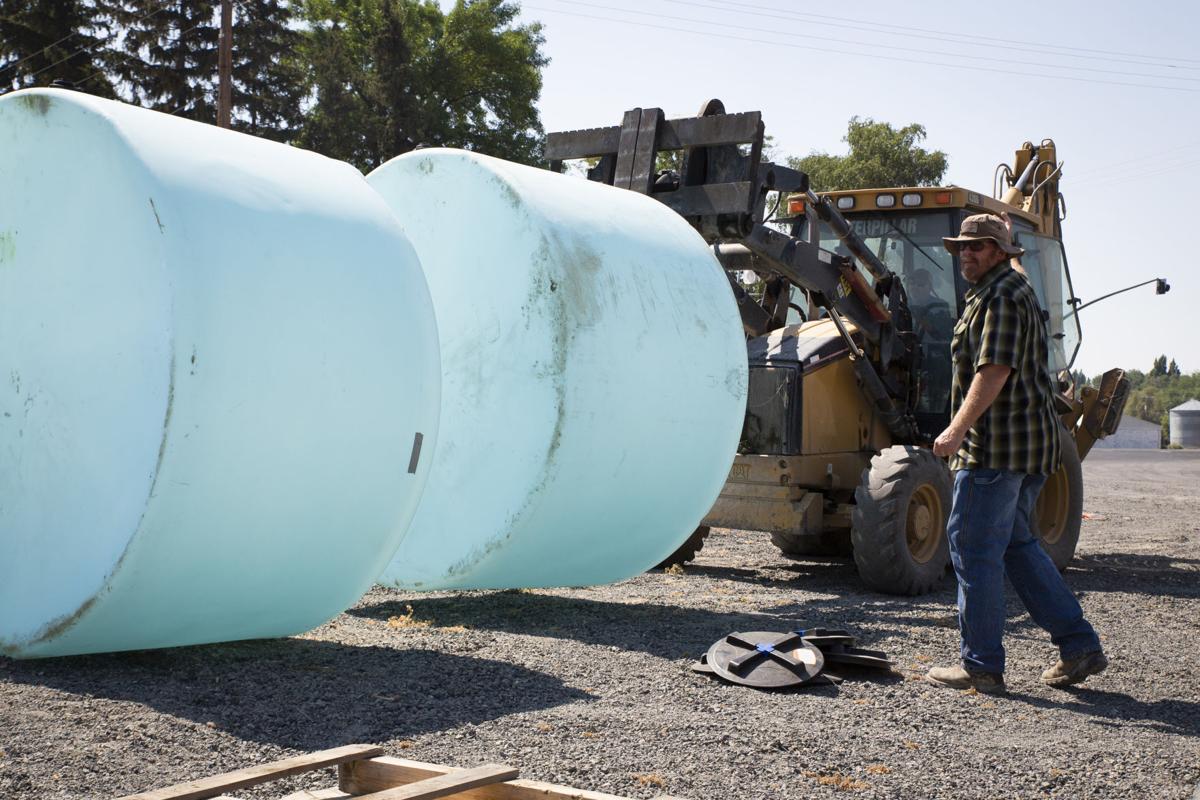 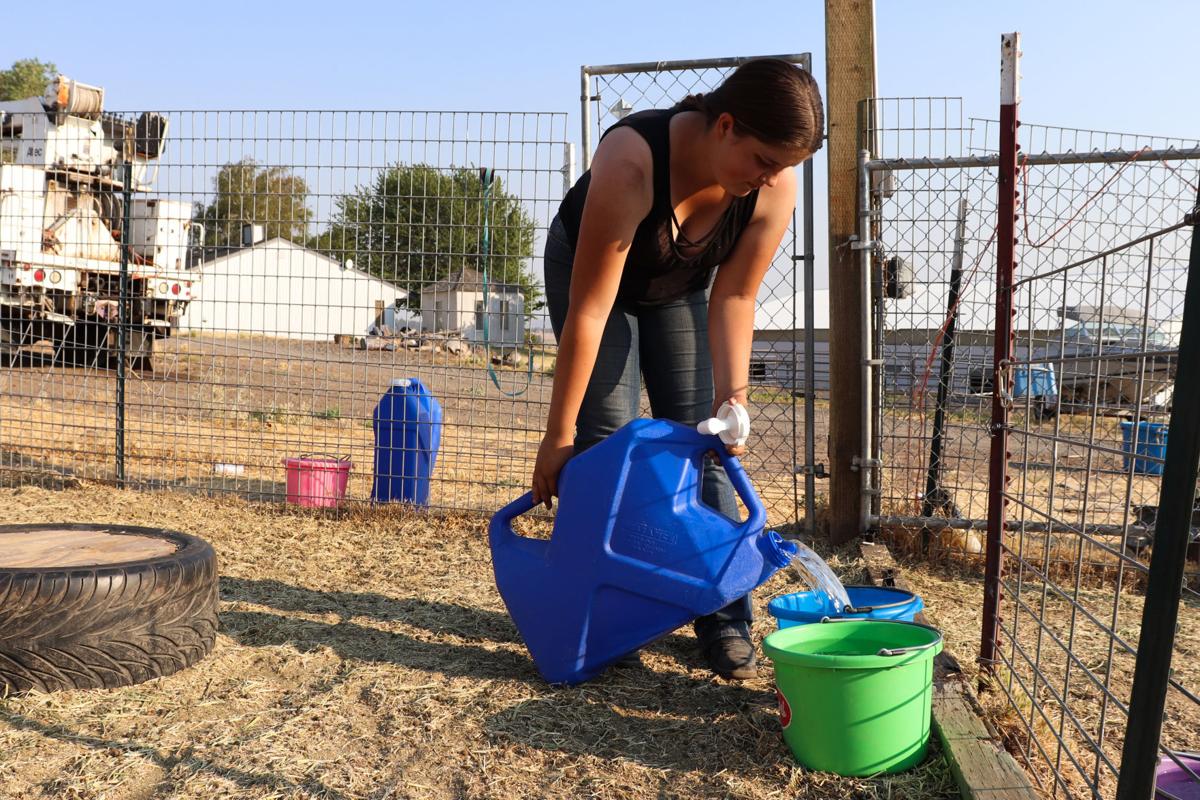 Rylee Buckley refills the buckets in her goat pen with water supplied by one of her neighbors.Buckley's domestic well has been dry since May 30. 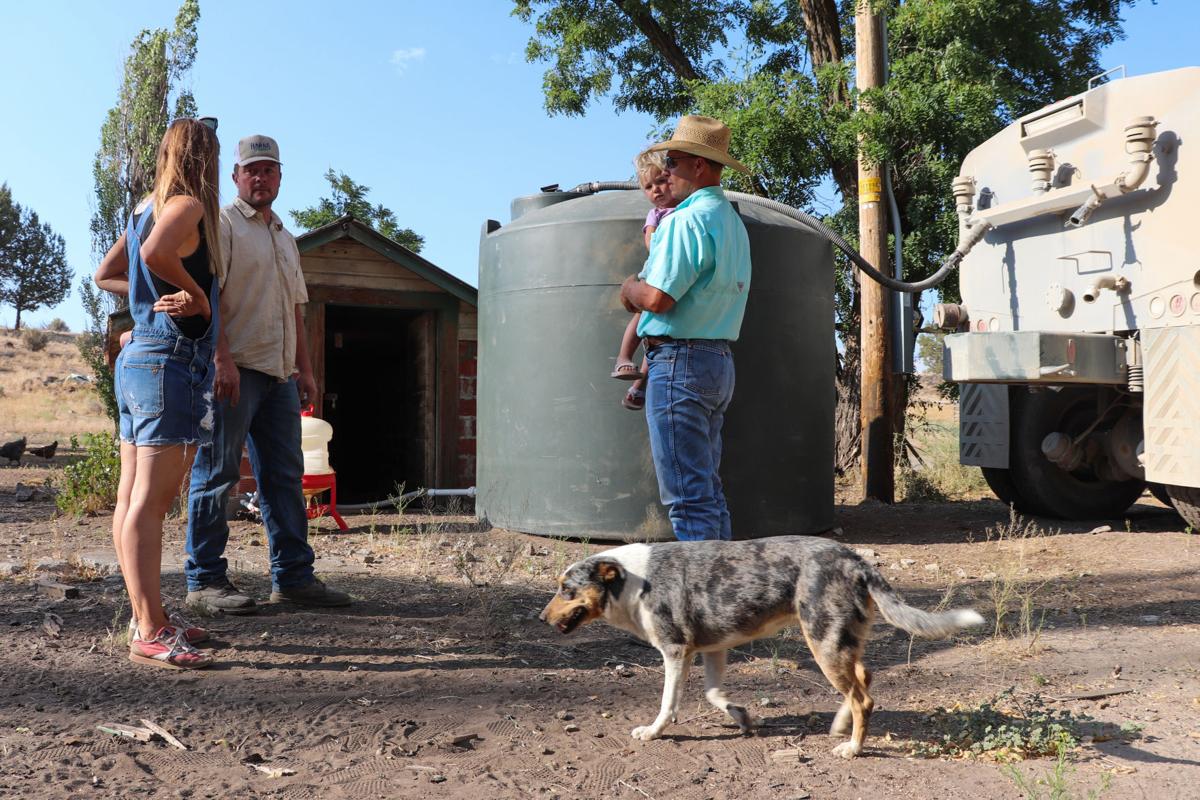 Jesse Hickey (middle) fills his sister's water tank from an old military water truck. Kelsey Steinberg, her husband Nathan Steinberg (right), daughter Hattie Jo, and their dog Dottie, have been with out water at their house near Melin since July 2. 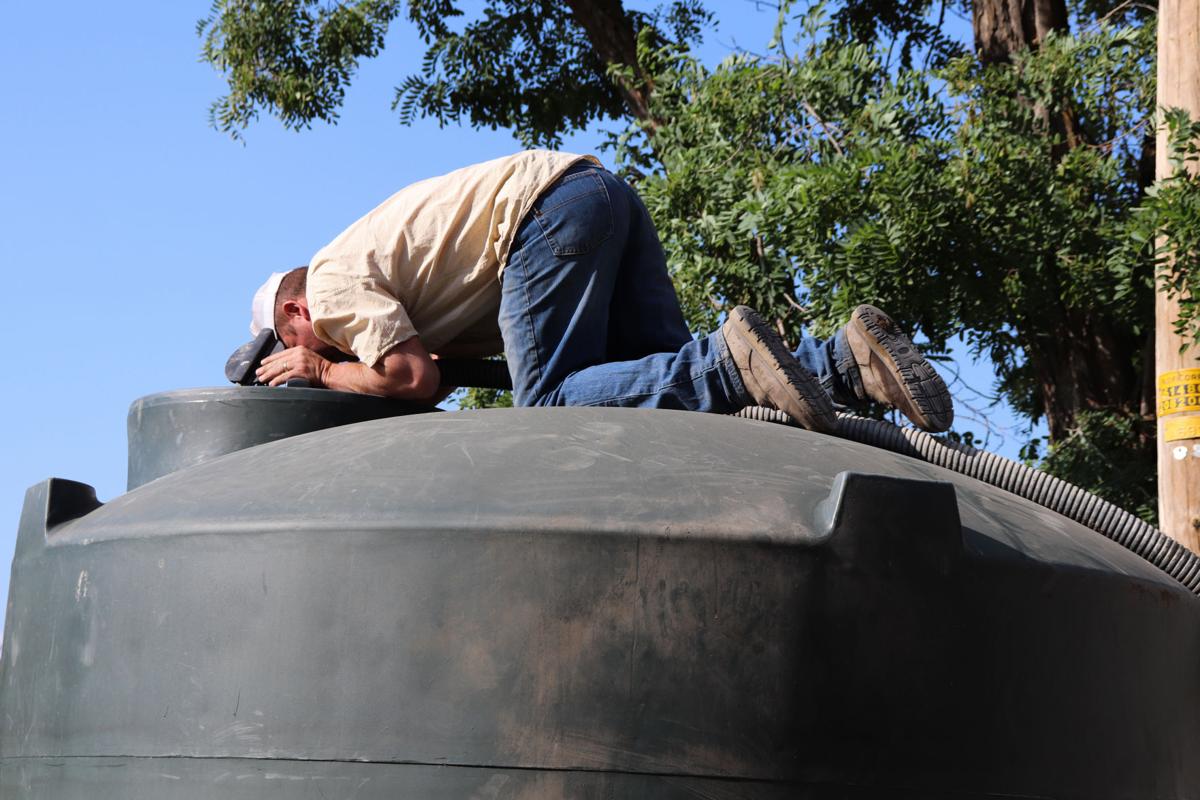 Jesse Hickey looks to see how low the water level is in his sister’s 2,500 gallon water tank before he refills it. 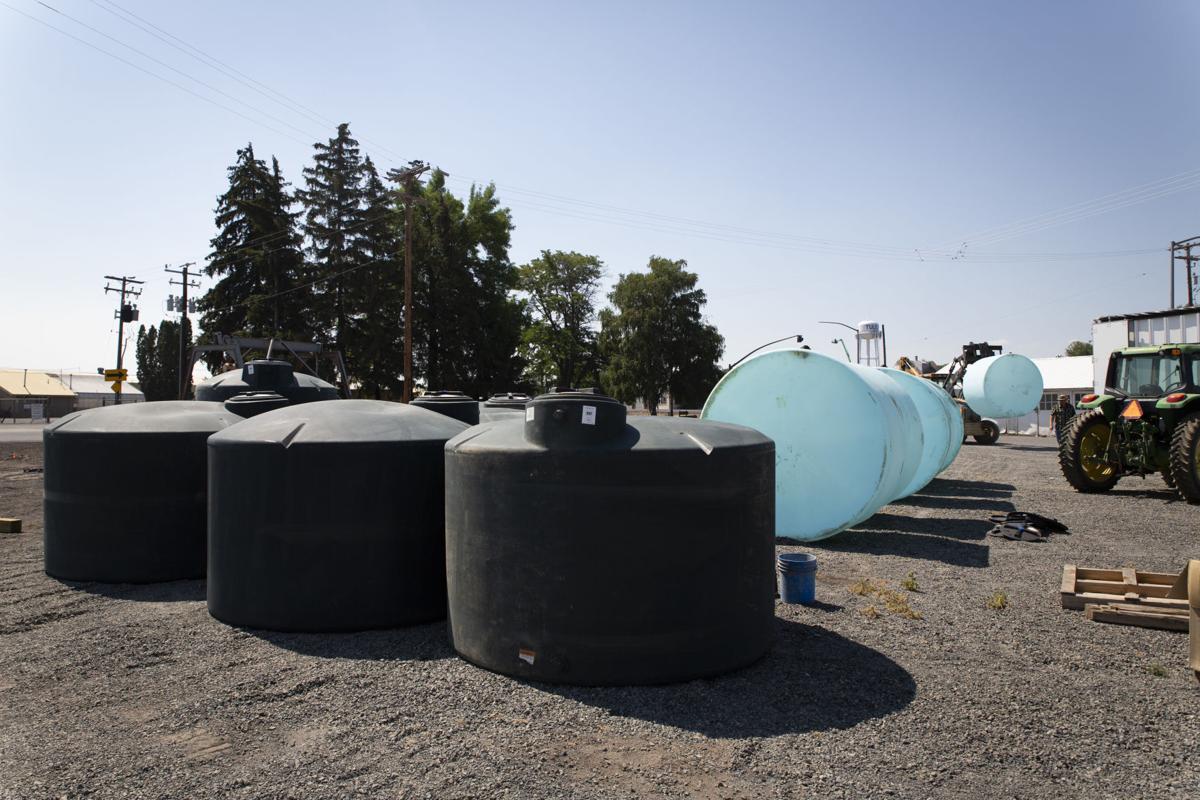 A number of 1,550 gallon water tanks were delivered to the Tulelake Irrigation District office on Friday.

Jesse Hickey (middle) fills his sister's water tank from an old military water truck. Kelsey Steinberg, her husband Nathan Steinberg (right), daughter Hattie Jo, and their dog Dottie, have been with out water at their house near Melin since July 2.

A number of 1,550 gallon water tanks were delivered to the Tulelake Irrigation District office on Friday.

Judy Shanks starts her shift at Basin Ambulance at 5 a.m. each morning. She likes to start and finish work early, so she can return to her Malin home in the afternoon and tend to her livestock.

But lately, rather than saddling up and going for a ride when she gets off, Judy is spending her afternoons finding water for her small collection of horses, cows and goats.

On June 24, the 118-foot domestic well that provides water to the Shanks property ran dry.

“I don’t even know how to explain the gut wrenching reaction you have when you go to turn on the faucet and no water comes out,” said Judy. “You don’t know whether to laugh or cry.”

For almost a month, Shanks’ animals have been drinking from a storage tank behind her house. In order to conserve the tank’s dwindling supply, she and her husband drive to her mother’s house to shower and do laundry.

The Shanks are not unique in this drought-impacted summer, during which all irrigation water from Upper Klamath Lake was cut off to the Klamath Project.

Many rural households in the Klamath Basin use domestic wells both for in-home, running water and to care for pets or a herd of livestock. In times of drought when surface water is unavailable, some even use their domestic wells to irrigate small amounts of farmland.

For Shanks, all their watering options have run dry. She has put her small herd of cattle on the market.

“It’s coming down to hard choices,” Shanks said, her eyes filling with tears. “With the way things have gone, I’m probably going to sell my herd. If I can’t water and feed them the way they need to be taken care of then they have to go. They just have to.”

Many of her neighbors are in similar situations.

Mike Ewing is a pump technician with Aqua Pump, a Klamath Falls-based supplier. He installs pumps in domestic and commercial wells, and adds piping so the well can reach farther below the surface as water levels drop.

He has been getting plenty of calls during this dry, smoky summer and his competitors are, too.

“When we go out to service one well there will be trucks from other pump companies down the road doing the same job,” he said.

Over the past month, Ewing has received about four or five calls per day about pump issues. He said about one call a day leads to a dry well. In those cases, Ewing isn’t much help. He can’t do anything but refer the well owner to a drilling company and hope they can extend the well far enough to find water.

In the last two weeks, the Klamath County Watermaster’s office has received 82 complaints from people in the Klamath Basin experiencing water shortages in their personal wells.

Dani Watson, watermaster of District 17 in Klamath Falls, knows there are many more empty wells that have yet to be reported.

Some were able to find water tanks and fill them from their neighbor’s pumps, or from other wells that haven’t yet dried up.

Water storage tanks are wide-based, plastic cylinders with a hole in the top to put water, and a few holes on the side to hook pumps into. They are bulky and not easy to transport — you have to bring the water to them.

Kelsey Steinberg’s house is one that is currently running on water from a 2,500 gallon tank, which her brother refills about every two weeks. Steinberg lives on her family’s farm in between Merrill and Malin with her daughter and husband. Their domestic well went dry July 2.

Steinberg said water tanks are not a sustainable solution to this problem for anyone. The water from her tank runs through the plumbing in her house. It is not potable, so her family has been buying plastic water bottles from the store for drinking and cooking.

“Wells are literally going dry on a daily basis, all within a two-mile radius of my house,” she said.

Steinberg said the well is about 100 feet deep, and that they have never had any trouble with it until this summer.

Drilling a well costs anywhere from $12,000-$15,000, depending on how deep the well is drilled. Steinberg is on a waitlist, along with most of her neighbors, who don’t expect to see a drilling company for another 2-3 months.

Misty Buckley lives south of Klamath Falls, and has been on a waitlist with a well drilling company after her well went dry May 30. She was recently told it would take months for the company to make it to her property.

Steinberg, Shanks, Buckley and many others experiencing well water shortages live near irrigation canals. In past summers, wells 80-200 feet deep can draw from a shallow aquifer that is recharged by water pumped through canals and over fields.

Paul Simmons, executive director of Klamath Water Users Association, is not surprised to see these water shortages in such areas. He has been hearing about the shortages for at least a month now.

“The areas where it is happening are all along major canals that have been left dry this season,” Simmons said.

Since the Klamath Project received no water from Upper Klamath Lake this year, farmers have not able to irrigate as much of their land from surface water, forcing those who want to irrigate to drill deep and pump water to the surface.

Ivan Gall, from Oregon Water Resources Department, agreed that the lack of surface water throughout the Project is contributing to the poor recharge rate of shallow well systems. But long-term, environmental factors are at play as well.

“Stacking up multiple dry years does not help,” Gall said.

Without extensive and time-consuming research, there is no way to tell where the groundwater level is in the Klamath Basin and how far it has dropped during the current drought.

The United States Geological Survey monitors water in the Klamath Basin and other areas with various sensors that can detect water levels. They monitor about 40 wells, including household and commercial wells with landowner permission, as well as USGS wells installed specifically to measure aquifer levels.

The recent measurements “are some of the lowest levels we’ve seen and it looks like a long term trend,” said Terrence Conlon, a regional science coordinator for the USGS.

It’s not just the scientists who are noting the lack of water.

“I put these drought wells in about 20 years ago on this day,” said Bob Bunyard, the owner of Klamath Pipe Center. He was called out to a farm this week off Springlake Road to extend piping an additional 20 feet.

Bunyard said this year is the worst in his memory, because on top of the drought and lack of surface water getting to farms and rural homes, there is a pipe shortage as a lingering result of the pandemic.

Bunyard and other pipe businesses in the basin don’t even have all the materials needed to fix struggling wells, even as calls continue to overwhelm phone lines.

Ewing, the technician from Aqua Pump, said he is also experiencing the same problem.

“When you do find a pipe the prices are tripled,” he said.

Relief is on the way

Klamath County Commissioners are working with Oregon Emergency Management and the Oregon Department of Human Services to secure portable water in places where wells went dry. There is no cost.

“This is considered emergency water,” said Commissioner Kelley Minty Morris. “People need to conserve as much as they can.”

The county has ordered 320 water storage tanks. Due to supply shortages, the county will receive shipments in increments, with the first one is expected to arrive late next week.

They are currently working to establish a distribution area where people can pick up tanks and fill them with fresh water, as well as a plan to refill tanks as people need them.

To ensure eligibility for a water tank, Minty Morris encourages people experiencing well issues to contact the watermaster’s office, where they will be added to the queue.

Brad Kirby, the manager of Tulelake Irrigation District, received a shipment of tanks ranging from 550-2,600 gallons on Friday for people experiencing well issues in the Tulelake area.

Kirby encourages people to call the Tulelake Irrigation District and they will work to get a water tank delivered.

Shanks said the constant struggles for life’s basics will cause people to leave the basin in drove.

“You’ve cut everything out of here,” she said. “It’s not just our livelihoods but a lot of people’s livelihoods.”

Shanks said she is thinking seriously of pulling up roots.

“If it comes down to that, I’m leaving Klamath County,” she said. “I’m ready to go somewhere else because our water situation is so bad and there is no end in sight.”