Mike Fahrer, owner of Cedar Point Nursery, in one of his strawberry fields during harvest time on Saturday in Dorris, Calif. 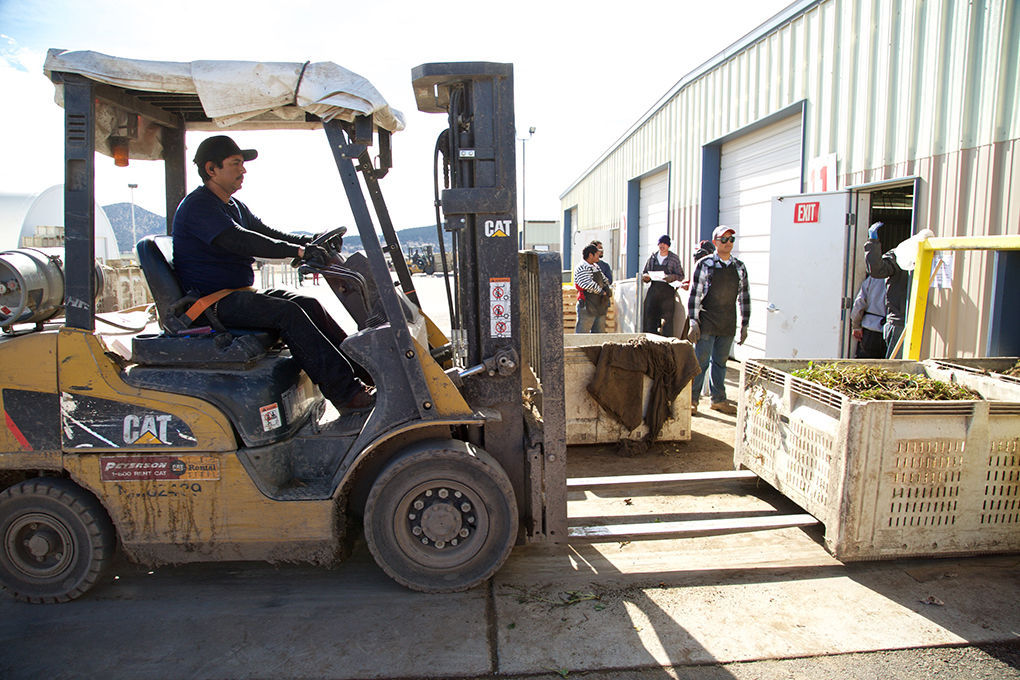 Manuel Torres of Fresno, Calif. places bins of strawberries onto a conveyor for sorting at Cedar Point Nursery's main operations in Dorris, Calif. on Saturday.

Mike Fahrer, owner of Cedar Point Nursery, in one of his strawberry fields during harvest time on Saturday in Dorris, Calif.

Manuel Torres of Fresno, Calif. places bins of strawberries onto a conveyor for sorting at Cedar Point Nursery's main operations in Dorris, Calif. on Saturday.

DORRIS — When employees of Cedar Point Nursery arrived at work Thursday morning, many were concerned they had come upon the scene of a vehicle collision.

A crowd had gathered around the entrance to the Dorris, Calif., farm while state troopers stood amid the fog coordinating traffic.

As employees drove into the parking lot, they learned demonstrators from United Farm Workers (UFW) were staging a protest against the the nursery, of which many workers said they had not been informed.

“It was a surprise for me and for everybody,” said Manuel Torres, a worker present during the protests.

Cedar Point Nursery is on the tail end of a six-week harvesting season, which sees more than 400 temporary employees added to its staff of roughly 100 year-round workers. The nursery raises strawberry plants for fruit producers both statewide and nationally.

Owner and CEO Mike Fahner said on Saturday that Thursday’s protest was his first such encounter with UFW, as his workforce is not unionized. He also said he was among those who did not know of the demonstration until it took place.

“This was pretty much the first time we’ve ever had a situation like this,” he said.

According to a Friday Facebook posting, UFW claimed “more than 150 nursery workers went out on strike” during the protest. Fahner said he saw no more than 50 individuals demonstrating, and at least 10 of those were not his employees.

During the demonstration, UFW said it was fighting to improve conditions at the nursery, including claims of low wages, unsafe working conditions and sexual misconduct allowed to take place on the premises.

But Fahner said these allegations are unfounded and the union has not offered any proof to support their claims.

“There’s no substance,” he said Saturday, “no documentation, no police records.”

“We do absolutely everything we can think of to provide a comfortable, clean workplace,” he continued.

Fahner said it is his guess UFW is attempting to alarm workers into unionizing, pointing out UFW would be entitled to three percent of paid wages from union members.

“They see this as an opportunity to organize people,” he said.

Assisting Fahner in the matter is Fresno, Calif., attorney Cal Watkins, of Sagaser, Watkins & Wieland. He said UFW may be allowed under the California Agricultural Labor Relations Act to engage with workers and encourage unionization — or even stage a demonstration — but it failed to follow the required steps for Thursday’s protest.

According to Watkins, a union is required to file a notice of intent to organize before interacting with workers, and a petition before attempting a strike. The UFW referred to Thursday’s demonstration as a strike.

Because of these alleged violations, Watkins’ office filed an unfair labor practice complaint Friday with the state Agricultural Labor Relations Board against the union. Watkins noted from his experience as a labor attorney such actions is not unexpected of UFW.

In a Facebook post Friday, the union said it also “filed charges” with the board against Cedar Point Nursery, while “other charges are under consideration.”

No representatives of UFW were immediately available Saturday for comment.

Not only was the union protest unknown to many workers, but several workers told the Herald and News the demonstration was unnecessary and unwanted.

Torres said, after beginning his shift as a forklift operator, union members approached him and insisted he stop working and join them. He said he refused, and did not believe their claims were true.

“They told us that we need changes here because we were treated badly,” said Torres, speaking through an interpreter. “I have never seen any of that here.”

“I am free to come and go and I am not indentured or anything,” he continued.

A seasonal worker based in Fresno, Calif., Torres said he believes Fahner and other leaders communicate well with employees and said he sees no need to unionize.

Employee Margarita Saucedo also said a union is not needed and said UFW protesters were being unfair to the nursery.

“We don’t need a union,” said Saucedo, who also spoke through an interpreter. “We are already united.”

She said the nursery treats and pays its employees well and said, as a year-round worker, she is able to support her family on the wages she earns.

According to Fahner, the average piece-rate worker earns $17.50 per hour, with multiple opportunities for overtime extended to hourly workers as well.

Employee Jesus Mendoza said the demonstration was “just a big joke” and said, after working 15 seasons at the nursery, he sees his co-workers as committed rather than exploited by their employers.

“We haven’t had any problems out here,” he said. “We’re just focused on trying to do our jobs.”

Mendoza said some employees may end up working long hours at the nursery during harvest season, but said they do so voluntarily and are paid overtime, and are motivated by a desire to finish their work.

“We do whatever it takes to get the job done,” he said.

While protesters have not returned since Thursday, Fahner said he is unsure his company has heard the last of them.

He added, if he is truly involved in unsafe or unfair labor practices, his regular and seasonal employees would not continue returning. Instead, the nursery has experienced very low employee turnover and has seen multiple generations of families come to work.

“They’ve been coming back year after year because they make good money,” he said.

As of Saturday, there were no additional protests scheduled by UFW either on their website, www.ufw.org, or social media.

In a Facebook post, UFW said it, “will continue to work with these laborers as they seek to improve their working conditions.”