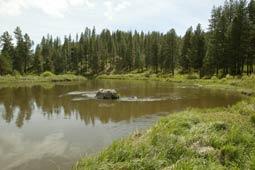 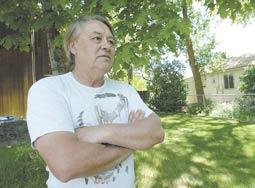 Clarence "Boonie" Jenkins was a child when he received a payment for his share of the former Klamath Indian Reservation. He says many tribal members were ill-prepared to manage their money effectively. 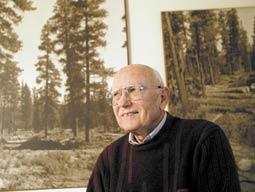 Bob Mezger served as the manager of timberlands held in trust by U.S. Bank for remaining members of the Klamath Tribe. Mezger said trust officials sought to manage the lands in a way that was best for tribal members.
Subscribe Today! Please read: Readers of local content on the Herald and News website – heraldandnews.com – will require a subscription beginning today. For the first few months, non-subscribers will still be able to view 10 articles for free. If you are not already a subscriber, now is a great time to join for as little as $10/month!
Tired of seeing surveys on articles? If you are a subscriber, simply log in or Subscribe now!
1 of 3

Clarence "Boonie" Jenkins was a child when he received a payment for his share of the former Klamath Indian Reservation. He says many tribal members were ill-prepared to manage their money effectively.

Bob Mezger served as the manager of timberlands held in trust by U.S. Bank for remaining members of the Klamath Tribe. Mezger said trust officials sought to manage the lands in a way that was best for tribal members.

Many Tribal members traded their interest in reservation for cash

What would you do if you were presented with a check for quarter-million dollars?

What for many is a daydream was reality for the more than 1,600 "withdrawing" members of the Klamath Tribe in 1961.

Each of the members who had voted to withdraw from the tribe and receive a cash payout for their share of the reservation received a check for $43,124.71. Adjusted for inflation, that would be worth more than $276,600 today, according to the U.S. Bureau of Labor's inflation calculator.

The checks came from the federal government, which purchased most of the tribe's 1.2 million acres of reservation land.

"They spent it everywhere," said Glen Kircher, who had started a hardware store in Chiloquin with his uncle in 1954. "I'm sure the businessmen in Chiloquin, Klamath Falls and around liked to see the infusion of cash."

Many of his customers paid off debts and bought something they had always wanted. Some purchased houses or land and others invested in stocks or education.

"And some threw their money away - partying," Kircher said.

Clarence "Boonie" Jenkins, a member of the Klamath Tribes who graduated from Klamath Union High School in 1961 after growing up in Chiloquin and Klamath Falls, said he saw many members of the Tribe go through their money fast, buying new cars, expensive appliances and other big-ticket items.

"If you go back, the root of the thing is these people were getting $100 per month," Jenkins said. "If you give someone $43,000, hell yeah, they are going to buy a new car … The new car dealers were in hog heaven because everyone had two or three."

Many who had lived modest lives suddenly had the means to buy almost anything they wanted.

"I know some of the Indians here, they would wear their clothes one time, then throw them away," Jenkins said.

Jenkins was a minor when the payments to the members of the Tribe were made, so his money was held in trust by an attorney, or trust officer. Even after he turned 18, he still had to go to the attorney to get to his money, he said.

And each time he took some out of the trust the attorney would charge an exorbitant fee. Jenkins used some of his money, along with money he earned by logging, to buy two Corvettes, a boat and room full of electric guitar equipment.

He had a sizable amount left he wanted to invest, but his trust officer wouldn't let him take the money out when he told him about his plans.

Then his parents came to him with some plans of their own. They had found a bowling alley for sale in Albany for $250,000, and needed some help with the down payment. He said he thought it was a great idea because they were avid bowlers and had experience running a bowling alley. He was able to get $20,000 for them and they turned in the down payment.

The next day they got a bill for $208,000, Jenkins said. His parents didn't know that along with the alley came the business's debt. They weren't able to cover the cost. They lost the money they had gathered up for the down payment, including Jenkins' $20,000.

"It should have worked out good for them, but it didn't," Jenkins said.

He said many of the member of the tribes who got termination checks simply didn't know what to do with that amount of money. Mistakes made range from bad business decisions to flat-out fast spending.

Tales are still told today of withdrawing members going around with paper sacks full of money or pockets stuffed with bills, buying new cars as if they were toys and treating them as such, saving too little and spending too much on alcohol, and soon ending up broke.

Many of those tales were compiled into a novel published in fall 2003 by Oregon writer Rick Steber.

Steber grew up in Chiloquin, the town that was once the heart of the reservation, and was a high school freshman in 1961. He heard the stories and witnessed how the money was squandered.

"I saw brand new refrigerators, washers and dryers sitting on porches of shacks that didn't have electricity," he said.

Out in a field, he said, he saw a brand new Lincoln Continental pulling an irrigation line. Cars were expendable for many of the suddenly wealthy withdrawing members of the Tribe. Instead of getting an oil change, tune up or fixing a flat tire, some tribal members would just get a new car.

"It was an interesting period of time for all the wrong reasons," Steber said.

Hucksters were also selling items around Chiloquin and the former reservation land such as aluminum siding that made worn-down homes shine, but only until it fell off, Steber said. And merchants in Klamath Falls and other nearby towns were offering "Indian prices," inflated from the regular price.

"The Indians were squandering the money, just recklessly," Steber said. "The money went fast. There were a lot of people, local merchants and stuff, who were standing in line to take it."

Not all of the members of the Tribe spent their money quickly or lived dangerously. But even many of those who tried to spend their money wisely didn't escape harm.

In December 1972, Federal Trade Commission officials from the Seattle regional office traveled to Klamath Falls to hold a public hearing.

The FTC concluded that members of the Tribe were charged inflated prices for cars, homes and other items compared to what white customers paid, sometimes double the cost or more. Many were also bamboozled by door-to-door salespeople who charged ridiculous prices for products with exaggerated benefits.

One product was a vacuum that was "was the best in the world … it had an activated charcoal air filter system … and would prevent colds, cause sound sleep, and reduce air pollution," according to testimony at the hearing.

FTC officials also looked into the dealings of trustees and lawyers who represented many of the withdrawing members of the Tribe. Of the 1,658 who opted to withdraw from the Klamath Tribe, almost 1,200 had their share held in a trust or guardianship. Many of these 1,200 had been minors at the time of termination.

Reports abounded of trustees and lawyers abusing their privileges, taking money from their clients and charging exorbitant rates. One trust officer was reported to have charged $600 for photocopying costs to do an audit, according to the FTC report.

"I think that we have sat back and rather expected the business people or lawyers, the bankers, the real estate agent to deal with us honestly because we feel they are in reputable business in a reputable community, supposedly, that they would deal fairly with us, and now we know better and we know that actually they do not deal with us honestly and fairly and actually our money is more valuable to them than to us …" Annabelle Bates, a withdrawn member of the Tribe said in testimony at the hearing.

The FTC ended up recommending consumer counseling; coordination of federal, state and local consumer protection organizations; and funding of the non-profit group Organization of the Forgotten American, which is made up of remaining and withdrawing members of the former Klamath Tribe. The organization was formed in 1969 to represent interests of tribal members at a time when there was no tribal structure. The organization is still in existence today.

The FTC also recommended a study to see if any withdrawing members of the Tribe needed financial help from the federal government to get by. Meanwhile, the remaining members didn't need help with their finances. They continued to bring in annual checks reaped from the sale of timber still held in trust for them.

The financial winners after termination were the 474 members of the tribe who didn't immediately cash in their share of the reservation.

In the 1960s and '70s, while many of the withdrawing members were spending away, the remaining members of the Tribe were still getting per-capita payments. Part of the reservation continued to be held in trust, administered by U.S. National Bank of Portland's Klamath Falls office. The bank was also known as U.S. Bank.

"There was always a focus of what was best for the Indian owners," Mezger said.

He said the trust officials weren't out to make money from the remaining members. Rather, they wanted to get the most out of their investment and manage the forest accordingly.

"There was a definite wall between the bank department and the trust department," Mezger said.

In 1969, the committee again called for a vote and this time the result was the termination of the trust, Mezger said. Although the trust was terminated, the remaining members, like the withdrawing members, had to wait several years for their payments while the finances were put in order.

Several bills were introduced in the U.S. Congress, including one from Oregon Sens. Mark Hatfield and Bob Packwood that called for the U.S. Department of Agriculture to buy the land. In 1974, President Gerald Ford signed an appropriation of $49 million to pay for it.

The U.S. Bank trust officials didn't think that was a fair price. "So we instituted a suit to get a more realistic value," Mezger said.

After watching the experiences of the withdrawing members, many of the remaining members invested their money well, putting the money in trust funds, buying land and using other secure investments.

The real financial losers in termination were the descendants of members of the Tribe on the final roll of 1954.

But they shared in the hardships, and as they grew up, many held resentment for those who withdrew, those who pushed for termination, and, most of all, for the government that ended the reservation and the Tribe.

Many descendants tried to forge a life in the area of the old reservation, where the economy was down, employment chances were limited and social problems abounded. Many left in search of better opportunities.