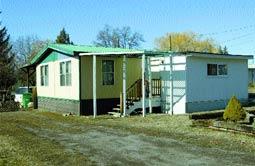 This is the house at 2150 Madison St. where Gerald Dean Krein Jr. lived with his parents. Krein was charged Thursday with using the Internet to solicit people across the country and in Canada to join a suicide pact and kill themselves on Valentine's Day. 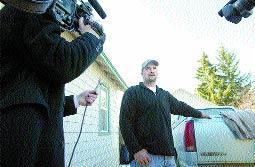 Wesley Grabowski said he had talked to his next-door neighbor, Gerald Dean Krein Jr., a couple of times. The Krein family moved there more than a month ago.
Subscribe Today! Please read: Readers of local content on the Herald and News website – heraldandnews.com – will require a subscription beginning today. For the first few months, non-subscribers will still be able to view 10 articles for free. If you are not already a subscriber, now is a great time to join for as little as $10/month!
Tired of seeing surveys on articles? If you are a subscriber, simply log in or Subscribe now!
1 of 3

This is the house at 2150 Madison St. where Gerald Dean Krein Jr. lived with his parents. Krein was charged Thursday with using the Internet to solicit people across the country and in Canada to join a suicide pact and kill themselves on Valentine's Day.

Wesley Grabowski said he had talked to his next-door neighbor, Gerald Dean Krein Jr., a couple of times. The Krein family moved there more than a month ago.

Police across the country are scrambling to track down people who agreed to a Valentine's Day suicide pact thought to be masterminded by a Klamath Falls man.

At least 32 people around the country and Canada were thought to be involved, but Evinger is concerned that the number could be larger.

"We could just be scratching the surface since (the Internet) is worldwide," he said.

The sheriff said Krein created a chat room that would attract those who may be considering suicide.

"Through the name it was very apparent what the topic was," Evinger said. He would not disclose the name of the chat room.

Krein was arraigned Thursday on a charge of solicitation to commit murder. He was in the Klamath County Jail this morning, and a grand jury is expected to hear the case Monday. Judge Roxanne Osborne set his bail at $100,000. According to court documents, Krein began using Yahoo instant messaging Jan. 16 to solicit people to join a "suicide party."

"Krein was attempting to solicit women and children into suicide," Detective Monty Holloway wrote in one of the few court documents made public so far. "Krein described his method of suicide by hanging."

Other court documents, including affidavits and the results of a search warrant, were sealed. Investigators said disclosing details would jeopardize the case.

Investigators described various possibilities for the site of the suicides: a gathering at Krein's home; at various locations around the country and Canada, possibly linked through Web cameras; or both in Klamath Falls and elsewhere.

District Attorney Ed Caleb said a suicide pact in itself is not a crime, but it is a felony to cause, motivate or solicit another person to commit suicide.

The charge against Krein so far is based on evidence that one of his solicitations involved a mother who agreed to murder her two children.

"It was a perceivable threat to the children and parties involved," said Capt. Chris Montenaro of the Klamath County Sheriff's Department.

"We're trying to identify the woman who said she was going to take her children with her," Evinger said. "We're moving along rapidly on that." Evinger was in Seattle Thursday, along with Caleb, Klamath Falls School Superintendent Cec Amuchastegui and others, attending a conference on school violence.

Authorities don't believe the pact included anyone else from Klamath Falls, or that anyone involved with the pact had traveled to Klamath Falls.

Because those said to be in the suicide plot met each other over the Internet, the scope of the investigation is broad, and finding the people is difficult, Montenaro said.

"(The Internet) certainly brings a lot of people together who may be thinking similarly, who fed on comments and suggestions of other individuals," he said.

This isn't the first time Krein has attempted to involve people in a suicide pact, authorities said.

A Klamath Falls police officer questioned Krein Sept. 9 after receiving a tip from out of state, Caleb said. Krein, who lived on Francis Street at the time, denied any involvement, and no charges were filed.

"This time we have direct evidence" to support a charge, Montenaro said.

Local authorities are working with Royal Canadian Mounted Police, the National Center for Missing and Exploited Children as well as with experts on Internet crime.

The possibility of a mass suicide on Valentine's Day has captured the attention of network television and CNN.

Evinger was interviewed from Seattle on a CNN news talk show, and was contacted about appearing on ABCs "Good Morning America." He was also interviewed on a Friday morning Fox news show.

Klamath County sheriff's deputies said they got a tip about the most recent suicide pact. The tipster is from Canada and had direct knowledge of the suicide plans.

Investigators then uncovered correspondence about the woman and her plans to murder her children as part of the pact. Detectives obtained a search warrant for Krein's home.

Authorities suspect Krein tried to erase evidence from one of his hard drives, Caleb said.

After his arrest, deputies took him to Merle West Medical Center so doctors could determine his mental stability, Caleb said.

Doctors could not find any medical reason to admit Krein to the hospital, and he was then booked at the jail.

Authorities said there is no evidence of religious ties or cult affiliation behind the suicide pact.

"I can't even imagine the motivation behind this," Caleb said.

Krein moved to Klamath Falls from northern California about a year ago and doesn't have a criminal record in Oregon. Investigators are still checking into his background in California.

He lives with his parents in a three-bedroom, one-bath mobile home about a block and a half north of South Sixth Street.

The house is tan-sided and green-roofed with a white addition. In one front window is a no parking sign, in another a photo of Don Knotts as Barney Fife. In the same window is a life-size figure of a hand displaying its middle finger in insult.

In the backyard, there was a large pile of empty cardboard boxes, many for shelves, a barbecue and other furniture.

Krein's parents, Kaye and Gerald Krein Sr., purchased the house Dec. 16, and the family has lived there just over a month. Krein's mother told police that her son was a caretaker for his father, who is disabled.

Neighbors hadn't seen or heard much of the family until a few days ago, when a woman in the house lambasted workers who were installing windows across the street at a house owned by Nicole and Charles Hammond.

The window crew members were sitting on the tailgate of their truck in the Hammond's driveway, eating sandwiches, when the woman came out of the house and told them they shouldn't be there.

"She started screaming at them and flipping them off," said Nicole Hammond said. "She called Mountain View Window and Door and said they had no right to be there."

The Hammonds have three children, ages 16, 13 and 10, and Nicole Hammond operates a day care out of her home.

She saw the arrest Wednesday, and said a plain-clothes officer knocked on the front door and ended up kicking it in. Sheriff's deputies arrested Krein and led him out the back of the house, she said.

She described him as burly.

"He looks like a mountain man, someone who doesn't frequent town much."

Next-door neighbor Wesley Grabowski talked to Krein only a couple of times.

"Every now and then it was a 'Hi, how you doing?' " he said. He said Krein wore tie-dyed T-shirts and looked "kind of hippieish."

Nicole Hammond is concerned about her children if Krein returns to the neighborhood.

"I have a day care and if he comes back, I'll get a petition," she said.

Trisha Vilhauer who works at Rick's Smoke Shop across the street saw the arrest Wednesday and heard stories from neighbors about Krein.

"My main concern is my kids go to school here," she said, referring to Shasta Elementary located a few blocks away. "I was not going to let them walk home from school anymore."