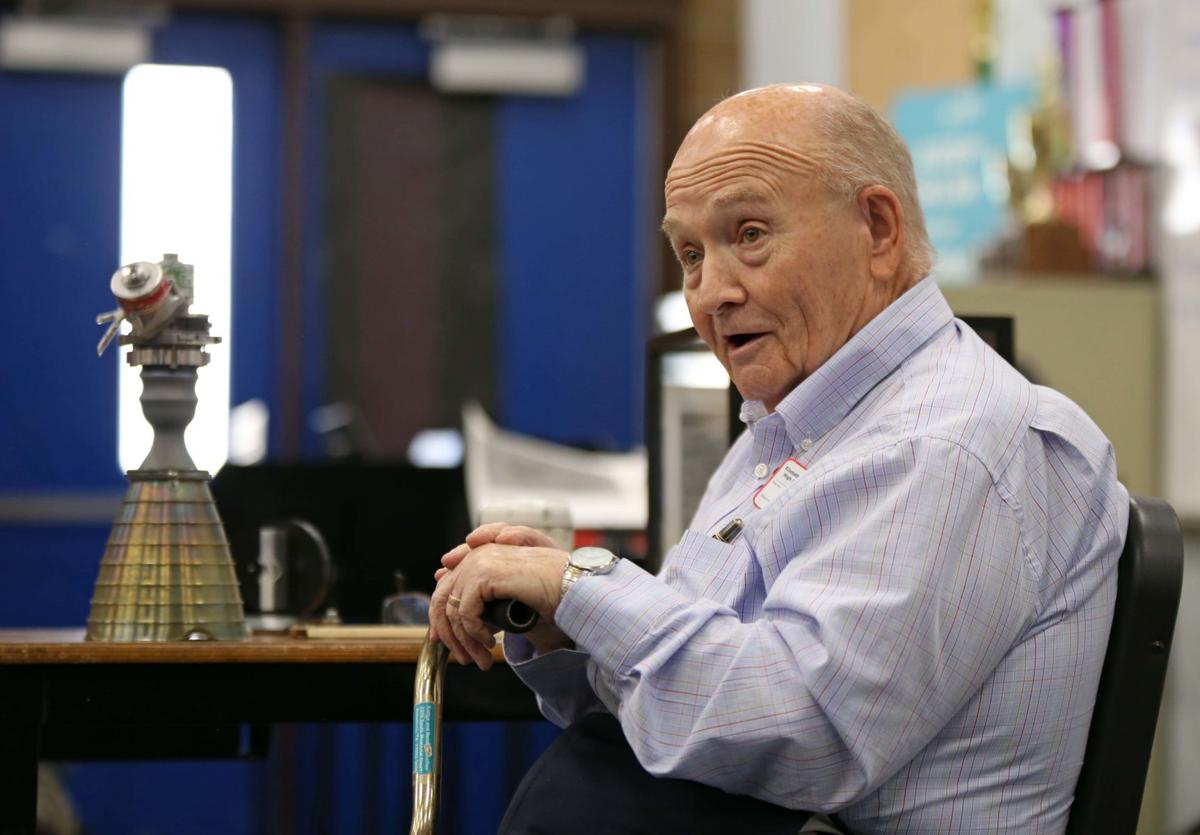 Dr. Norm Chaffee, a former NASA propulsion engineer who worked on rockets for the Apollo 11 mission and others, speaks to students on his experiences at Henley High School in Klamath Falls Monday, Oct. 22. 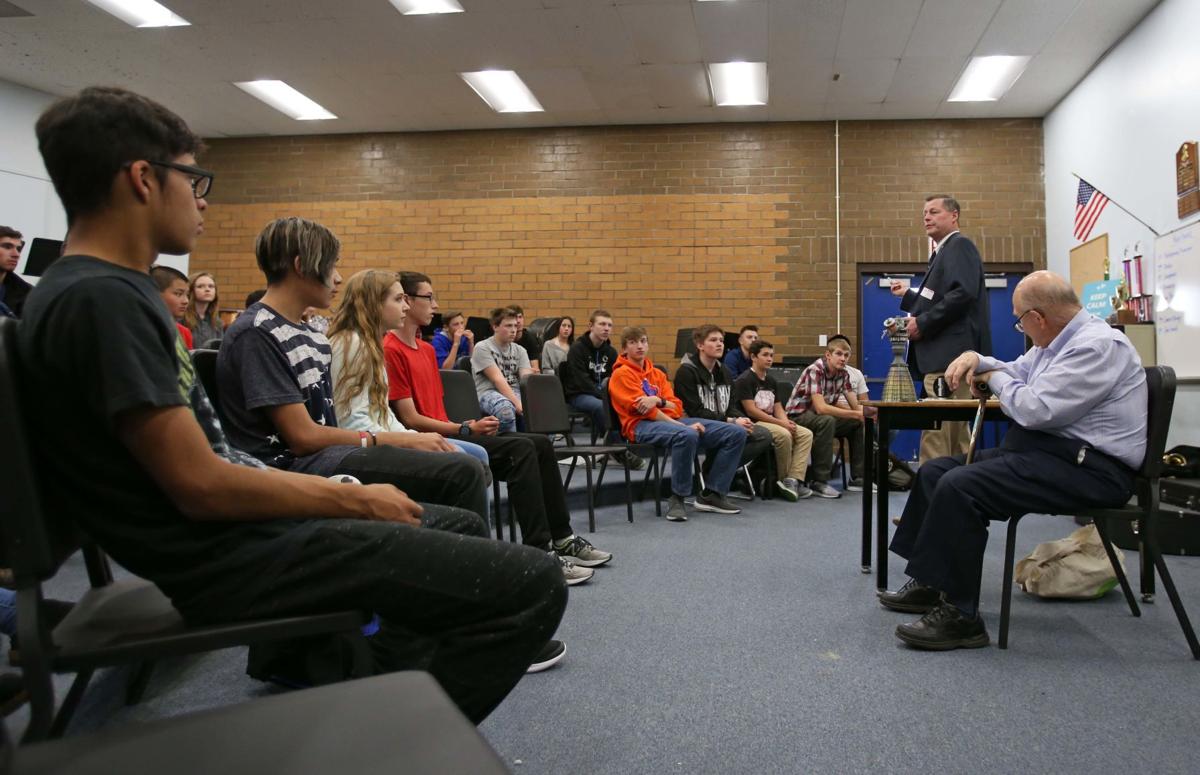 Students in an engineering class at Henley High School in Klamath Falls listen as Dr. Norm Chaffee, a former NASA propulsion engineer who worked on rockets for the Apollo 11 mission and others, speaks on his experiences Monday, Oct. 22. 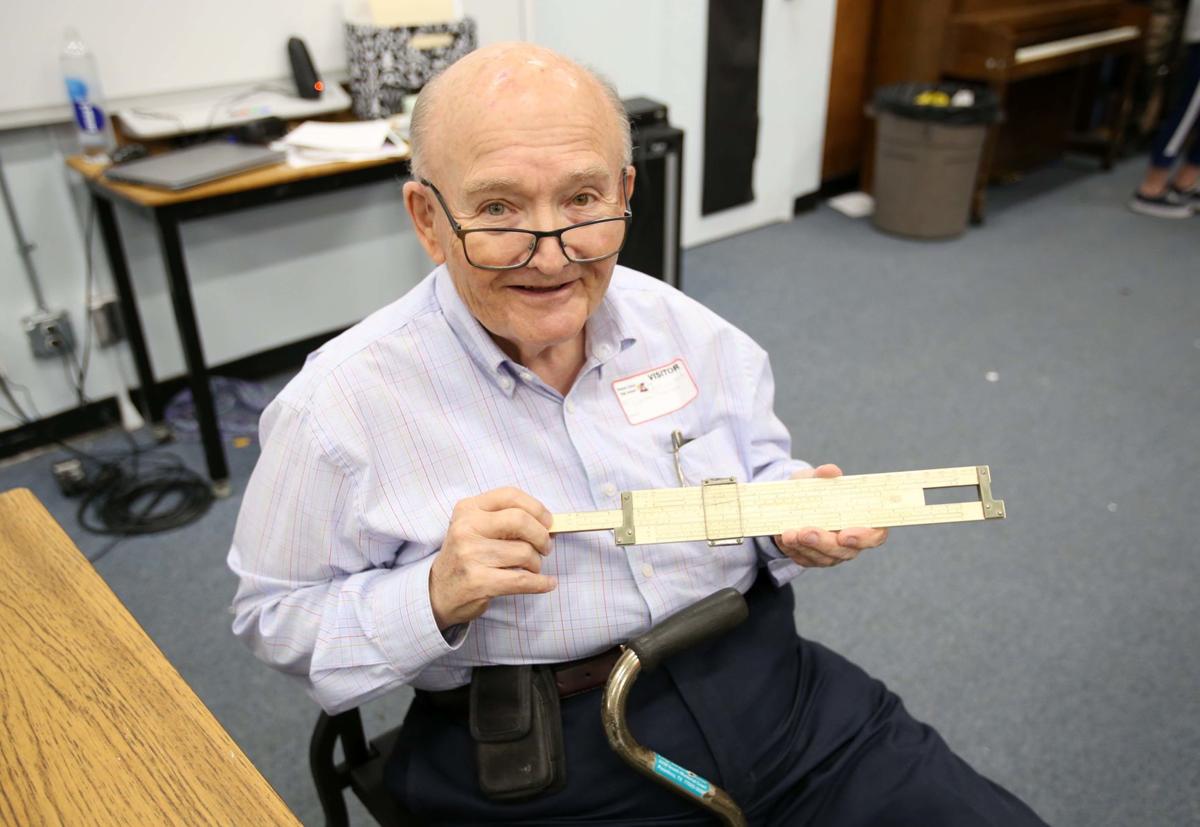 Dr. Norm Chaffee, a former NASA propulsion engineer who worked on rockets for the Apollo 11 mission and others, shows off his own personal “computer” that he’s had since the 1950s before speaking to students at Henley High School in Klamath Falls Monday, Oct. 22.

Dr. Norm Chaffee, a former NASA propulsion engineer who worked on rockets for the Apollo 11 mission and others, speaks to students on his experiences at Henley High School in Klamath Falls Monday, Oct. 22.

Students in an engineering class at Henley High School in Klamath Falls listen as Dr. Norm Chaffee, a former NASA propulsion engineer who worked on rockets for the Apollo 11 mission and others, speaks on his experiences Monday, Oct. 22.

Dr. Norm Chaffee, a former NASA propulsion engineer who worked on rockets for the Apollo 11 mission and others, shows off his own personal “computer” that he’s had since the 1950s before speaking to students at Henley High School in Klamath Falls Monday, Oct. 22.

Thanks to his help, the astronauts successfully got to the moon and back in 1969.

Dr. Norm Chaffee, a now-retired NASA propulsion engineer who also worked on the Gemini Project and the International Space Station, has a seat before speaking with students at Henley High School Tuesday afternoon.

He takes out a slide rule, which he says he bought in 1953. He likes to tell people he “went to the moon” with it.

“Here’s my computer,” Chaffee says with a smile.

Chaffee made his rounds across the county that afternoon, also visiting other schools such as Mazama High, Klamath Union and Klamath Community College. The rocket scientist said he’s made similar stops at schools across the U.S. for 20 years.

He talked on his own experiences as a young scientist and joining NASA, in addition to encouraging that students follow their passions and shoot for the moon in their own career paths.

And though Chaffee’s career with NASA launched in 1962, his roots with science and, more specifically, space fantasy started in his early years.

But he knew the difference between science fiction and reality. He decided to stray away from the premise of space travel and focus more on chemical engineering in his earlier years.

Since he couldn’t use a Bunsen burner with his childhood chemistry set, he improvised with his mother’s toaster and gas stove when he could. In one instance, he describes a purple combo of chemicals that launched its way up to the kitchen ceiling.

“And then, all of a sudden, it would go ‘bloolooloop’!” Chaffee told students with excitement. “I had to repaint the kitchen ceiling a couple times because that purple stain’s hard to cover.”

He also liked understanding how different pieces of equipment worked. The results weren’t always stellar but Chaffee said he often learned something new.

“Sometimes, I could put them back together, sometimes I couldn’t,” he said.

After first setting aside the “fiction” of space travel, he soon learned of new opportunities he could – and would – later get involved with.

From ‘fiction’ to ‘science’

Chaffee was thrilled after learning that space travel could, in fact, be a real life possibility. He recalled news of the Sputnik, the first Russian satellite shot into space, on Oct. 4, 1957. He then gave students a brief overture of the space race that ensued between the U.S. and, as it used to be known, Soviet Union.

This reignited his own interests into the premise of space travel, an idea he previously thought restricted to his favorite literary and television fantasies.

“Maybe space travel and that kind of stuff is not all science fiction,” Chaffee said. “Maybe there’s going to be some science fact here.”

It was after obtaining a bachelor’s and master’s in chemical engineering from Tulsa University that he set his sights on NASA and their own desire for engineers. It helped that the programs would be in Houston, which was not too far from areas he was already fond with.

He first came onboard with NASA at the Lyndon B. Johnson Space Center in 1962. The rest, since then, has literally been history.

A message of passion

Chaffee was quick to cover ground and talk to the dozens of students at Henley High that afternoon. He was joined by James Loftus, whose own father worked with NASA for more than four decades and also served as an assistant director.

Loftus shared many relics of the Apollo 11 with students, including one of Chaffee’s own small propulsion engines. It was one of the 100-pound thrust engines that helped control the pitch, yaw and roll of the spacecraft and lander.

In terms of function, Chaffee likened the tech to when one may fill a balloon with air and then let it go, only with several more technical specifications and chemical reactions involved.

Valves in the device, Chaffee said, are also designed to open and shut in 14 milliseconds, or “14/1000ths of a second.”

“In the balloon’s case it’s not controlled,” Chaffee said. “In this case, it is.”

Chaffee’s presentation was well-received as students continued to speak with him long after the bell rang at the end of class.

Henley High sophomore Skyler Howard said he wants to be an aerospace engineer who eventually flies F-35 jets. He has also made stops to Kingsley Field where his father works.

Howard said he was very impressed with how sharp Chaffee was in conversation.

“Even at 80 years old, he still remembers everything,” Howard said. “He doesn’t even have to think about it.”

Chaffee said he was thrilled to see what each student could bring to the table as time progressed. He also said he was encouraged to see more women enter the field in a profession that has traditionally been male-dominated.

The retired rocket scientist added another note: he would rather not see any more “space races,” but instead future space travel, if not colonization, that brought all people together from all nations.