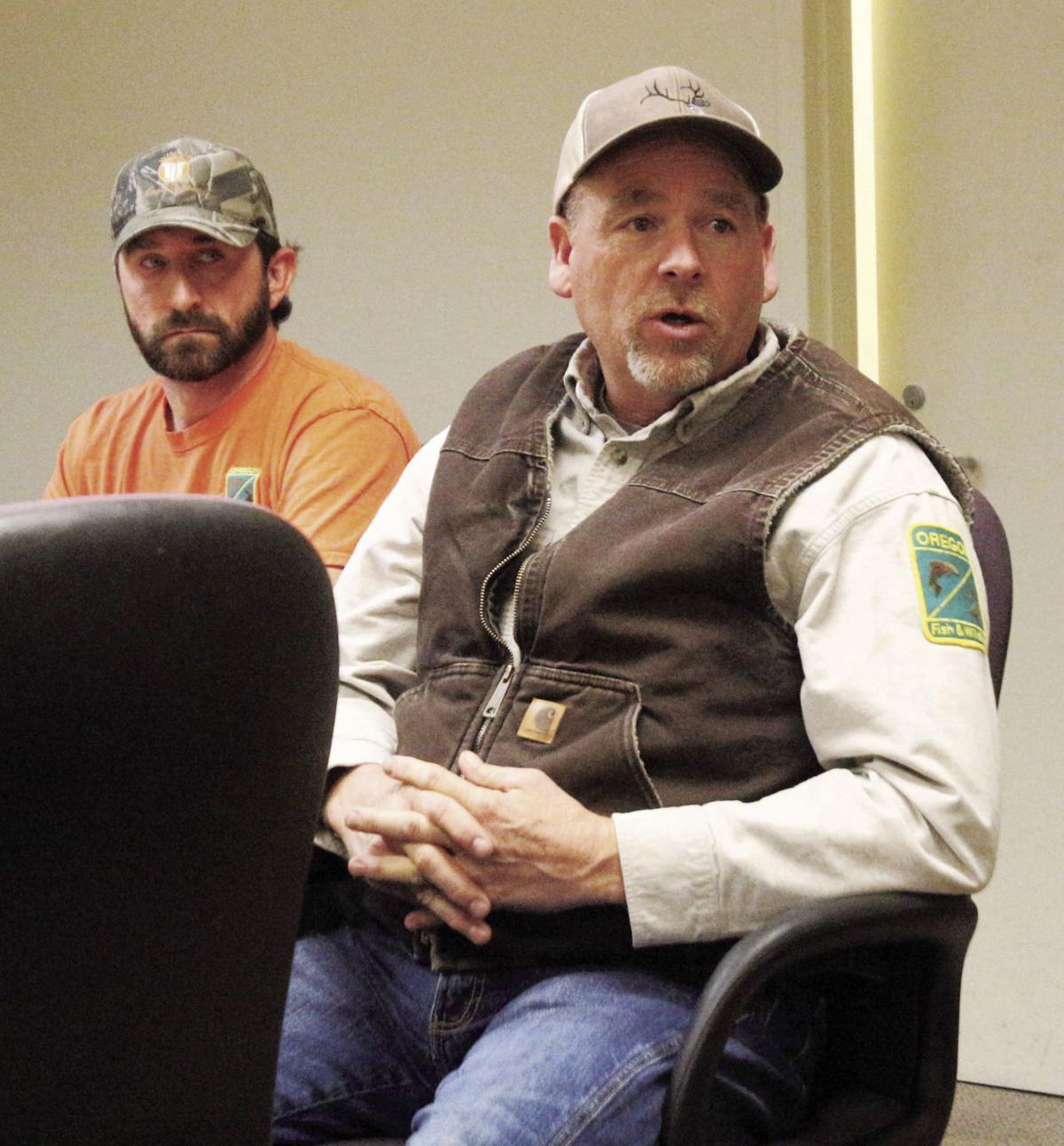 Tom Collom, wildlife biologist for the Klamath District of Oregon Department of Fish and Wildlife, answers a question on Thursday at the Klamath County Wolf Depredation Compensation Committee. 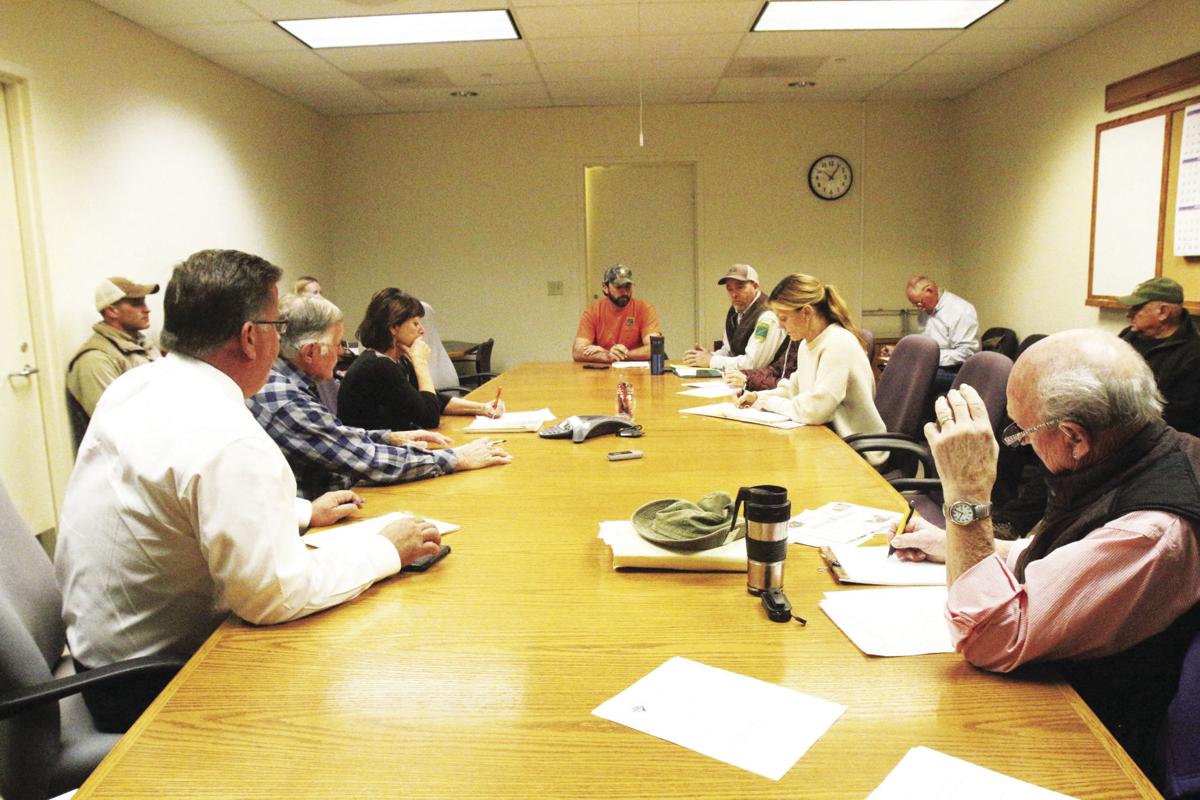 Tom Collom, wildlife biologist for the Klamath District of Oregon Department of Fish and Wildlife, answers a question on Thursday at the Klamath County Wolf Depredation Compensation Committee.

There was one wolf kill in Klamath County this year, though eight were logged in Jackson County, according to Tom Collom, district wildlife biologist for Oregon Department of Fish and Wildlife.

Collom and others shared an update on wolf activity and monitoring in rural Southwest Oregon at the Klamath County Wolf Depredation Compensation Committee Thursday morning.

“We really dodged a bullet,” Collom added of wolf activity this year in the county.

Klamath County Commissioner Donnie Boyd, liaison between the commission and the committee, emphasized that while wolf kills were down this year, 2018 was higher than 2017.

Collom said the decline in wolf kills this year was a little bit odd since wolves were in Klamath County a larger than normal percentage of the time.

“The Rogue Pack came back over onto the Klamath side much earlier than they ever have,” Collom said. “I believe that was attributed to the fact they didn’t survive any pups this year.”

“They came over (to Klamath County) early, got into trouble,” he added.

Collom reference a 700-pound steer was found killed on a Fort Klamath ranch.

“Producers are being a little more on top of things as far as checking livestock more regularly, that kind of thing,” Collom said.

Collom said ODFW will keep monitoring the Bly and Klamath Marsh areas this winter for wolves, which have been sighted in those areas.

“Just the fact that you have wolves on the landscape doesn’t mean you’re automatically going to have conflict,” he added. “There’s just a lot of different variables there that play into that.”

Collom also shared that the Oregon Legislature this year approved funding for three wolf-related positions to be scattered throughout the state.

One of those positions is Sam Dodenhoff, a southwest region wolf biologist who will cover the wolf landscape between Lane and Lake counties.

Dodenhoff started in the Central Point-based role on Monday. He’ll will work on a conservation management plan for wolves in Western Oregon. He’ll be working closely with U.S. Fish and Wildlife Service as well as with landowners to resolve livestock conflicts.

“I’m sure you guys will see me often,” Dodenhoff said.

Another position, a portion of which is funded by the wolf depredation compensation committee, is conflict prevention specialist Alyssa Mahaney. Mahaney is based in Grants Pass, but could have a presence helping deter wolves in Klamath County if the need arises.

“One of the things where Alyssa would really be helpful in Klamath County are with some nighttime presence,” said Paul Lewis, chairman of the committee.

“We’ll certainly be giving her a call when we have that opportunity.”

The committee was formed in 2012 to compensate ranchers for losses by wolves. It also provides funds to perform what the committee calls non-lethal controls to keep the wolves from the cattle.

Lewis, a rancher on the east end of Langell Valley, has chaired the committee since it was formed.

Lewis said the committee is keeping an eye on the effectiveness of an electric fence put in by rancher Ted Birdseye in Prospect, and whether it could work in Klamath County.

“We’ve got to pay attention to what’s going to work anywhere,” Lewis said.

“That’s a fairly small plot of land. It’s 270-some acres. We’ve got a lot of electric fence on our ranch, but to get the outside perimeter fenced to (protect from) wolves ... it’d cost a bloody fortune.”

The next committee meeting will be in January or February.