One of OR-7’s pups, seen in this photo from July 12, 2014, has recently been tracked with an uncollared female wolf, in western Lassen County. 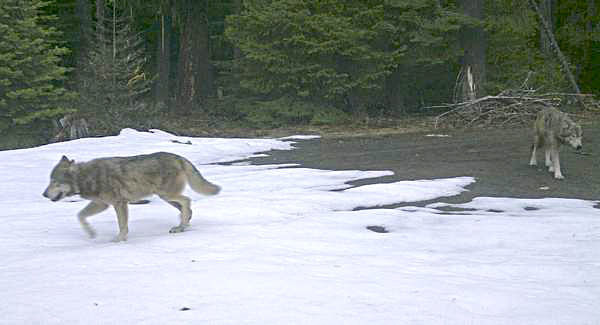 A trail camera photo from February 2016 shows wolf OR-7, left, for the first time since his tracking collar quit working in 2015. Efforts have been underway to recollar OR-7. 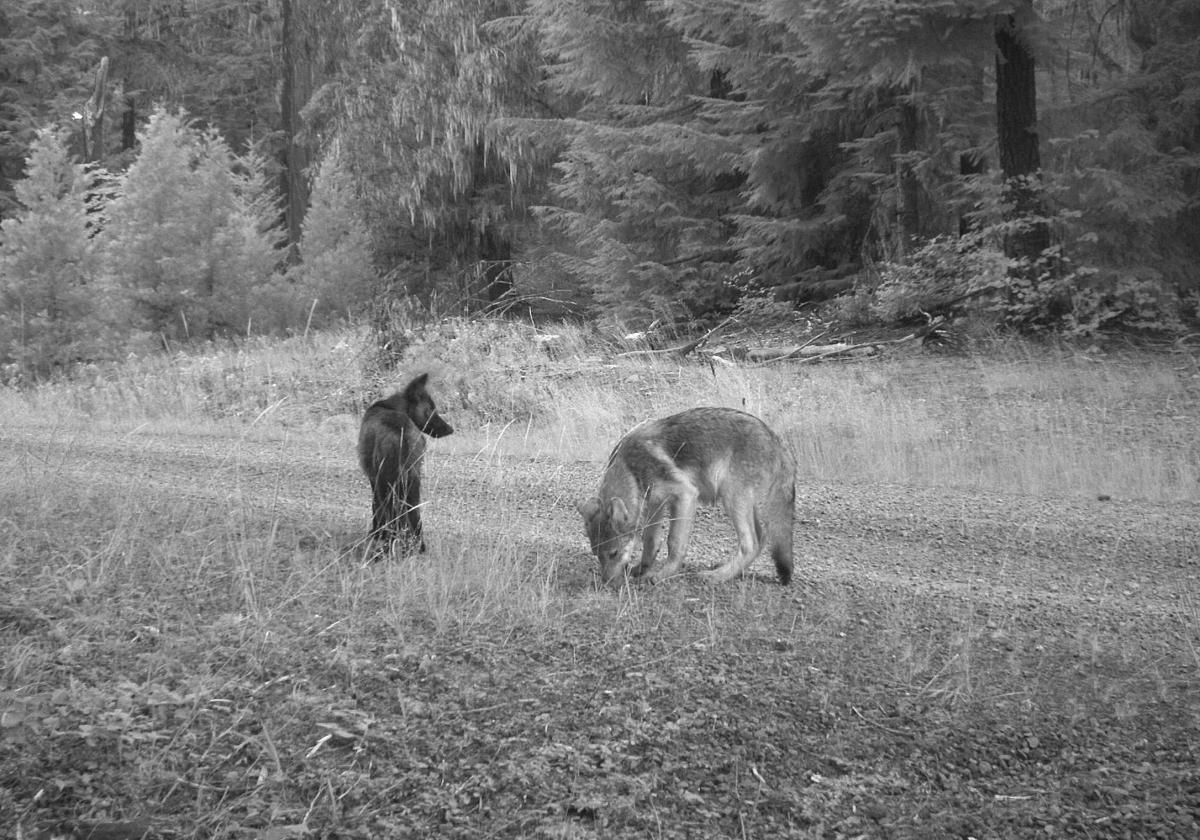 Wildlife cameras in the Rogue River-Siskiyou National Forest have confirmed that OR-7 has sired at least two new pups this year.

One of OR-7’s pups, seen in this photo from July 12, 2014, has recently been tracked with an uncollared female wolf, in western Lassen County.

A trail camera photo from February 2016 shows wolf OR-7, left, for the first time since his tracking collar quit working in 2015. Efforts have been underway to recollar OR-7.

Wildlife cameras in the Rogue River-Siskiyou National Forest have confirmed that OR-7 has sired at least two new pups this year.

In the approximately six years after his well-documented journey across Oregon, which included Deschutes County, the gray wolf best known as OR-7 has established new wolf populations in Southern Oregon and Northern California. As the nearly 9-year-old wolf settles into old age, he’s remembered as a patriarch, a grandfather and a pioneer for Oregon’s burgeoning wolf population.

Today, OR-7 is the alpha male of the Rogue Pack, a group of 11 or 12 wolves that spends much of its time in the Rogue River National Forest in Southern Oregon. OR-7 and his long-time mate — who doesn’t have a radio collar or a designation — produced a litter of pups this spring, according to John Stephenson, wildlife biologist with the U.S. Fish and Wildlife Service’s Bend office.

“Most of the biologists thought he’d never find a mate,” Stephenson said.

Moreover, several of OR-7’s earlier pups have built upon his legacy, as one pup traveled to Northern California, establishing the beginnings of a wolf population there.

Gray wolves are native to Oregon, but as human populations increased in the state at the beginning of the 20th century, wolf populations decreased. For much of the second half of the century, there were no confirmed wolves in the state. However, wolves were reintroduced to Idaho in the 1990s, and gradually made their way to Oregon. By the end of 2011, Oregon’s wolf population had grown to 29 known wolves, according to the Oregon Department of Fish and Wildlife, concentrated in the northeastern corner of the state.

OR-7 — nicknamed “Journey” following an online contest put together by Oregon Wild — was around 2 years old when he left the Imnaha Pack in far Northeastern Oregon in 2011. Stephenson said 2-year-old wolves often break away from their packs in order to find mates and start new families. While wolves require a lot of territory, Klavins said how far wolves travel while “looking for love and adventure” is very dependent on the individual.

OR-7’s travels, which spanned thousands of miles, took him from the Wallowa Mountains in Northeast Oregon toward Burns, through parts of Crook and Deschutes counties and eventually toward the spine of the Cascade Mountains. The gray wolf wandered into California in search of a mate, making him the first wolf confirmed in the Golden State in nearly a century. By crossing the Cascades, he also became the first confirmed wolf in Western Oregon in more than 60 years.

While Klavins said Southern and Eastern Oregon have plenty of good terrain where OR-7 could set up a territory, no other wolves lived in the area, so he kept wandering in search of a mate. Stephenson added that his travels took him across Interstate 5 in California near Yreka, not once but twice.

Stephenson said the combination of the wolf’s long, possibly unprecedented journey and a radio collar allowed viewers to track the wolf’s progress as it traveled across the state.

“It was the first time we could document that he made this incredible journey,” Stephenson said.

Like so many wanderers before him, OR-7 eventually found a mate and settled down. Stephenson said not much is known about OR-7’s mate, a black wolf believed to be slightly younger than he is, though she is believed to be part of the Oregon population of wolves. The state’s population numbered at least 112 wolves in 2016, according to the Oregon Department of Fish and Wildlife.

One of OR-7’s pups from a prior litter arrived in Lassen County, in northeastern California, according to Kent Laudon, wolf specialist for the California Department of Fish and Wildlife. Laudon said OR-7’s pup, along with a female wolf whose origins are unknown, are the first pair of wolves to establish territory in that portion of California in years.

The pair had pups in April, and Laudon said photos in June show the wolves accompanied by four pups. In California, where the known wolf population is under 10, a large litter could help the species develop a foothold, according to Laudon.

“Once you have a breeding unit on the land, that makes a big difference,” he said.

Still, OR-7’s legacy is marred somewhat by a couple of incidents. Last October, ODFW investigated an incident where Southern Oregon wolves killed two calves on private land and injured another. Michelle Dennehy, wildlife communications coordinator for ODFW, confirmed that the Rogue Pack was responsible for the attacks.

Separately, Laudon said the pack in Lassen County was tied to two attacks — one confirmed as a wolf attack and one probable one — in a span of two weeks this fall.

The battery in OR-7’s radio collar died in 2015, leaving researchers without a consistent way to monitor the wolf. Still, a trail camera caught a photo of the famous wolf earlier this year, and Stephenson said there’s no reason to believe OR-7 isn’t still alive in Southern Oregon.

While stories inspire for different reasons, Klavins said one reason that OR-7’s story took off — spawning a website, attention from fans on every continent except Antarctica, and a documentary film — is that it came during a time when wolves were becoming increasingly politicized, but ultimately transcended those politics.

“What was nice about the story of OR-7 is that it was a story about a real wolf doing real-wolf things,” Klavins said.