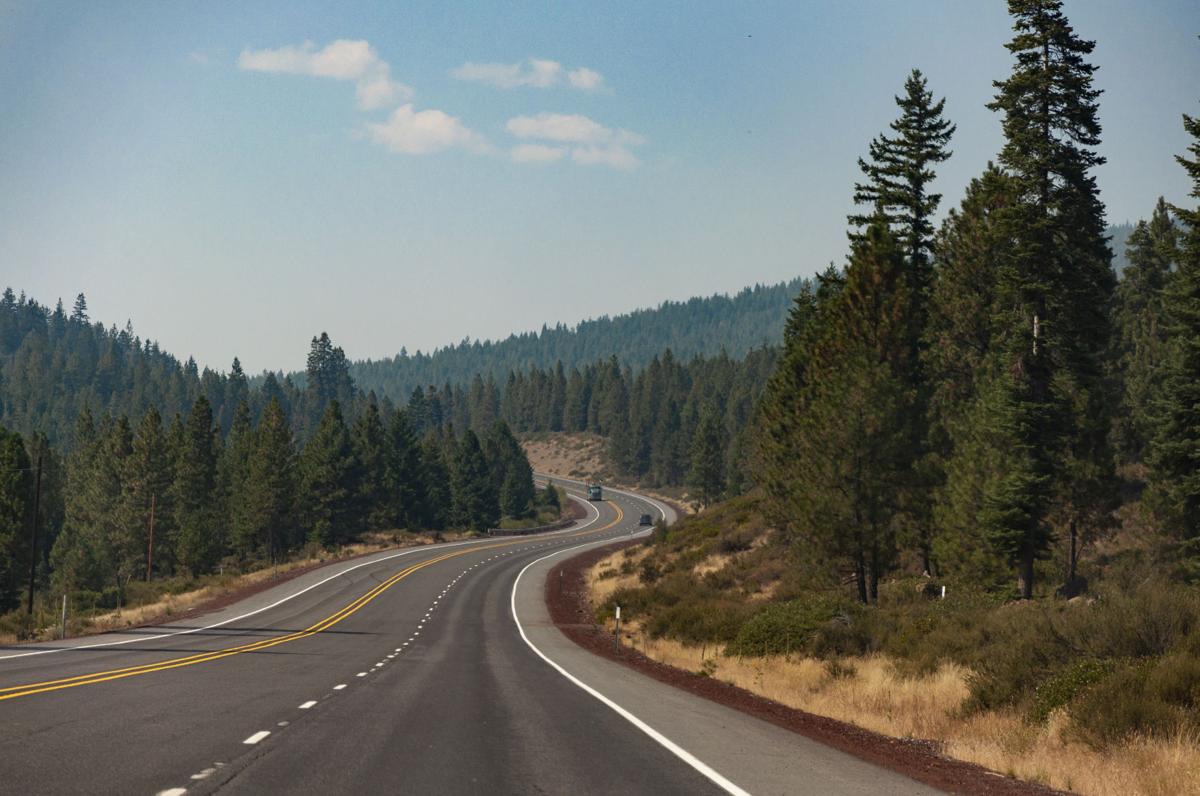 This stretch of Highway 140, north of Spence Mountain, is part of the Volcanic Legacy Scenic Byway. One of only 30 drives designated “All American Roads,” the byway travels 500 miles from Crater Lake to Lassen Peak. 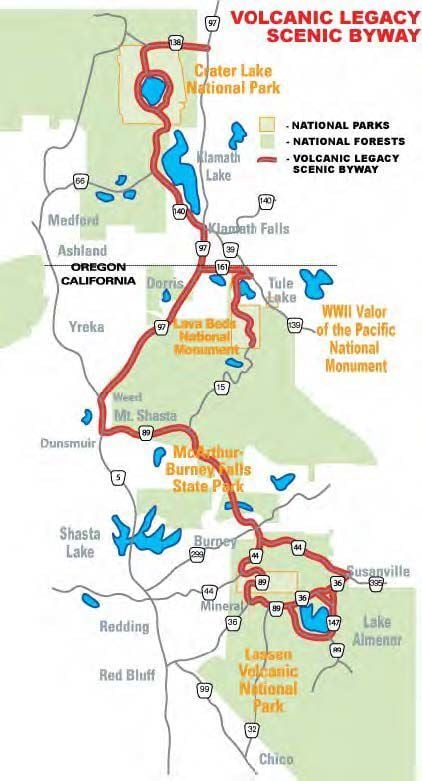 A map of the Volcanic Legacy Scenic Byway Route.

Most Klamath County residents have driven past a sign for the Volcanic Legacy Scenic Byway, its illustrated snowcapped peak framed by evergreen trees and a soaring bald eagle for good measure. From the rim of Crater Lake to the wetlands of Lower Klamath National Wildlife Refuge, the route passes most of the Klamath Basin’s natural jewels.

The byway stretches about 500 miles from the northern edge of Crater Lake National Park to Lake Almanor, Calif., connecting hundreds of small communities, roadside attractions and public lands. From Lava Beds to Mt. Shasta to Mt. Lassen, some of the nation’s most significant volcanic peaks lie along this scenic drive along the spine of the Cascade Range. But for Jim Chadderdon, executive director of Discover Klamath, the byway isn’t being enjoyed to its full potential.

“We’re sitting on a gem here, and it’s under-recognized,” he said.

The Volcanic Legacy Scenic Byway first formed in Oregon, when local forest service employee Christine Lilienthal organized a route from Highway 97 south of Chemult, through Crater Lake and the Fremont-Winema National Forest and down to the California border. It was designated a National Scenic Byway in 1997, and in 2002 Ore-Cal Resource Conservation & Development extended the project down to Lassen Volcanic National Park in California.

The byway also bears the unique distinction of “All American Road” along with only 30 other drives in the entire U.S. Chadderdon said this is the only one centered around volcanoes.

“We’re not just dinking around with some tour route,” he said. “This is the best of the best.”

The Volcanic Legacy Community Partnership, a board made up of representatives from all along the route, has been overseeing the byway’s operation for decades, but a recent leadership change a little over a month ago renewed efforts to get the word out about the legendary route.

The new executive board traveled the whole route of the highway, identifying byway markers that needed repair and developing informational signage at turnouts and points of interest. They hired a dedicated social media manager to run byway-specific accounts and are in the process of revamping the byway’s official website. A few years ago, they got a Klamath County Tourism Grant to print spiral-bound guides for the byway and are planning on reprinting new ones.

The VLCP, of which Chadderdon is Treasurer and Secretary, is also forging partnerships with local tourism offices, encouraging tourists to travel the whole route in order to bring economic activity to every community along it. Chadderdon likens the route to glue linking these often small towns together.

“We really want to get the communities along the byway engaged and understanding that they need to own this thing,” Chadderdon said.

Rennie Cleland, president of the VLCP who helped develop the byway’s California side in the early 2000s, said the goal is to encourage tourists to drive the whole route. Increased activity on the byway will result in greater visitation and revenue for the region’s national parks and monuments as well as its communities. He said there’s no shortage of fascinating tales to be told along the route.

“The more we can market it, the more we can put it out there, the more people are going to come visit,” he said. “The stories are there, but they just haven’t been put into a package that can help promote our region.”

To better package those stories, Discover Klamath has released several self-guided audio tours of locations along the byway from Lava Beds National Monument to Upper Klamath Marsh. Using the free VoiceMap app, the tours combine turn-by-turn directions with intriguing stories and commentary about what users are seeing. They’re currently working on a tour of Tule Lake National Wildlife Refuge and have plans to add ones further south along the byway.

Of course, these projects require money, and while federal funding for National Scenic Byways used to exist, byway management organizations now have to apply for their own grants. But Cleland said federal money may come soon, especially after the recent passage of the Great American Outdoors Act. Groups like the VLCP are determined to drum up congressional support for future byway-related legislation.

“There’s renewed support out there for America, and there’s renewed support for this kind of stuff,” Cleland said, adding that with COVID-19 leading many Americans to rediscover the road trip (and its relative seclusion compared to other forms of travel), it’s the perfect time to revive the byway.

“We’re sitting on a region of uniqueness, and it hasn’t been exposed or celebrated,” he said.