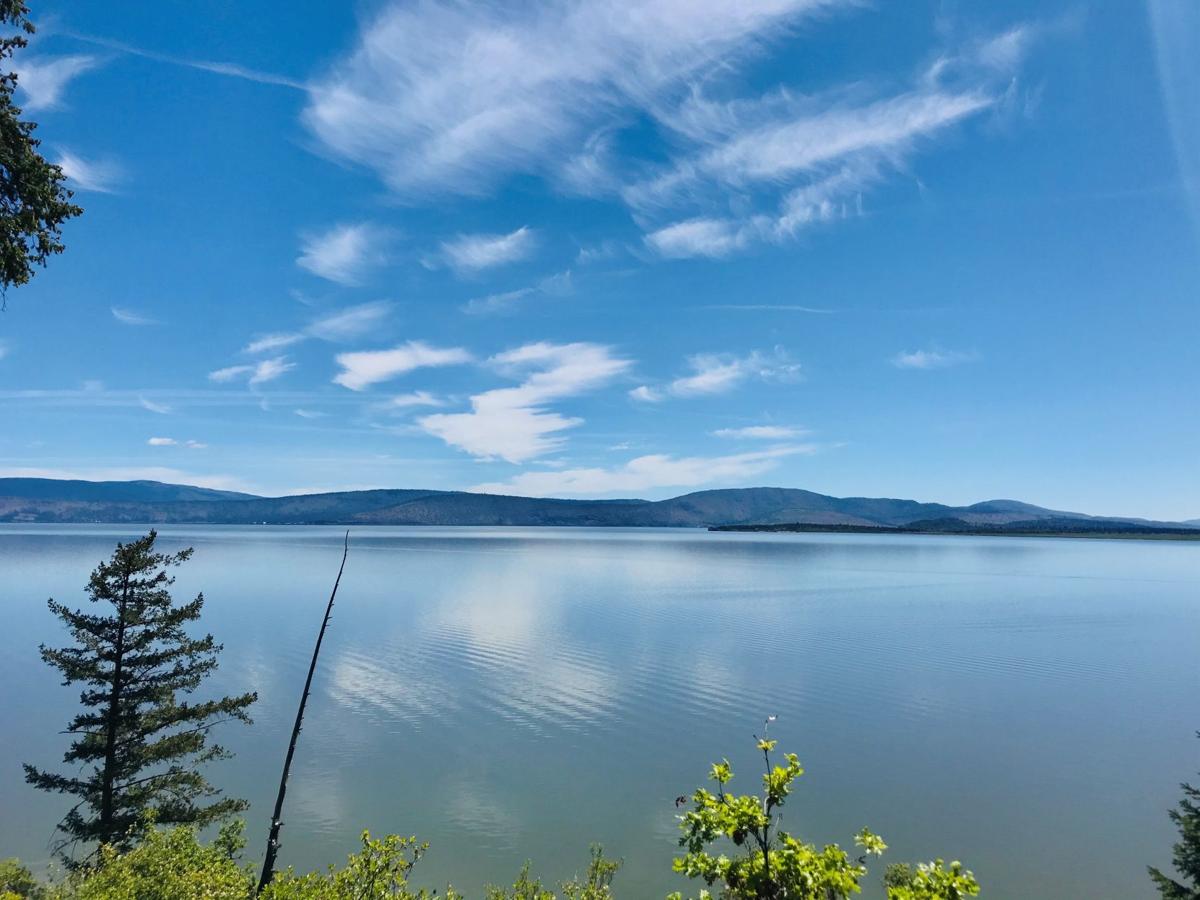 Water returning in Februrary to Upper Klamath Lake, pictured here in a 2020 file photo, is among the lowest in 40 years of study by the Bureau of Reclamation.

The NRCS snow-water equivalent for the Klamath Basin as of February 18. The current water year is in black, while the median level for the past 30 years is in green.

Citing a dismal outlook on water year 2021, the Klamath Tribes have filed a notice of intent, saying they will sue the U.S. Bureau of Reclamation for violating the Endangered Species Act if Upper Klamath Lake dips below levels outlined in the 2020 biological opinion this spring.

The letter, which will allow the Tribes to file suit more quickly if they decide to pursue litigation, was sent to the principal deputy commissioner of Reclamation and the acting secretary of the Interior. It asserts that the Bureau violated the 2020 biological opinion by diverting too much of the lake’s water to Klamath Project irrigators at the beginning of last summer.

That opinion stipulated maintaining lake levels at certain times of the year to provide adequate habitat for ESA-listed C’waam (Lost River suckers) and Koptu (shortnose suckers), which are culturally and spiritually important to the Klamath Tribes and have been declining in numbers for decades.

“Because we went below the lake levels required for spawning season last year, they’re not allowed to do that this year,” said Klamath Tribal Chairman Don Gentry. “It’s kind of a hard, fast requirement to be in compliance with the biological opinion.”

A news release from the Tribes said projected inflows to Upper Klamath Lake are some of the lowest they’ve been in 40 years, based on periodic briefings from Reclamation hydrologists.

Paul Simmons, executive director of the Klamath Water Users Association, said Upper Klamath Lake is refilling at a rate in the third percentile of its period of record. Just bringing it up to the required level for sucker spawning will be hard enough, to say nothing of providing water for irrigation.

“We know that we’re in a very serious situation,” Gentry said. “It looks like there’s going to be very little water, if at all, for irrigation.”

Despite snowpack accumulation that seems to be improving as the winter progresses —as of February 18, the Basin’s snow-water equivalent was at 80% of the median for this time of year compared to 70% at the beginning of the month, according to the Natural Resources Conservation Service —Simmons said exceptionally dry soils are absorbing precipitation that would normally melt into Upper Klamath Lake in the spring.

“You have a situation where the ground in the upper watershed is just dry,” Simmons said. “To the extent that you have precipitation up there, a lot of it is just soaking in. It’s a dry year on top of a dry year.”

Simmons said that given current conditions, BOR is expecting an even lower allocation for the Klamath Project than last year. Though February is too early to say for sure what that number will be, Simons said the current projection is 132,000 acre-feet.

“We would need a very, very atypical February and March to get out of the situation we’re in,” he said.

According to the latest climate forecast from Oregon Department of Forestry Meteorologist Pete Parsons, March through May is not expected to deliver those conditions, though things are certainly looking better compared to last year.

With a moderate La Nina impacting the equatorial Pacific, Parsons said colder temperatures are expected to endure slightly longer than normal this winter, potentially holding snow in the high elevations for longer than last year.

“You’re likely not going to see a rapid snowmelt from the Cascades,” he said in his February 18 forecast video.

Parsons said he expects basins in Southern Oregon to trend at or slightly below average snowpack levels, with above average mountain snow during March and April. Even in May, when La Nina conditions may begin to ease, there’s still a likelihood of below average temperatures and above average precipitation.

“I didn’t think this winter was going to look at all like the last two winters,” Parsons said. “It hasn’t.”

Overall, conditions over the next few months aren’t expected to result in a huge departure from average temperatures and precipitation, but Simmons said the dry soils combined with a dry start to this year’s winter mean that may not be enough to avoid another abysmal water situation this year.

As part of a settlement between various Basin stakeholders including the Yurok Tribe, U.S. Fish and Wildlife Service, National Marine Fisheries Service and the Klamath Water Users Association that established augmented flows in the Klamath River for the Bureau’s interim operations plan (in effect until 2022), Reclamation committed that Upper Klamath Lake would not drop below 4,142 feet during C’waam and Koptu spawning season in April and May.

The notice of intent said the Bureau instead dropped the lake level during that time last year to 4,141.38 feet, “chasing many fish away from their spawning ground and leading to the desiccation of thousands of eggs.”

The biological opinion’s Incidental Take Statement, which outlines the maximum numbers of fish each aspect of the project can harm or kill without being subject to litigation under the ESA, stipulated that Upper Klamath Lake levels may not fall below 4,142 feet during two consecutive years. The Tribes’ letter states that, since that already happened last year, they’ll sue BOR under the Endangered Species Act if it happens again this spring.

Given that snowpack levels and streamflow forecasts for the spring and summer are once again low this year, Gentry said he fears that Reclamation won’t have enough water to maintain those lake levels while also delivering water to the Klamath Project. In a way, he said, filing the notice is also a warning to Basin irrigators to plan for another abysmal allocation this growing season.

“We felt it was important to give people a heads up to consider how that would impact agriculture this year,” he said.

Simmons said the release’s messaging around the notice filing, which suggested that Basin irrigators should “simply plan this spring on not taking water from the natural environment needed to fend off the imminent extinction of endangered species” and “instead take this opportunity to begin planning for long-term, sustainable practices that fit within the limits of our ecosystem” was not well-received by those in the ag community.

“It did seem to try to send the message that it’s time to pull up the roots and go,” he said.

The Tribes said BOR will be in violation of Section 9 of the ESA if it allows lake levels to drop, which prohibits the harm of listed species, and Section 7, which requires federal agencies to ensure that their actions don’t jeopardize species or their habitat. And doing it a second time in a row, it won’t have the protection of the incidental take to fall back on.

“It is vitally important to the Klamath Tribes that Reclamation meet its obligations to the C’waam and Koptu, as well as to other ESA-protected species — even if this means reducing or postponing Project water deliveries for the coming season,” the letter said.

Recently updated guidance from outgoing Secretary of Interior David Bernhardt has said that Reclamation can’t satisfy ESA requirements by curtailing Project water deliveries at the expense of irrigators, though that isn’t expected to impact Project operations until the operations plan expires at the end of water year 2022. Simmons said BOR has to spend time incorporating the guidelines into their operations plans.

“That’s not to say that someone might not raise those issues in response to a lawsuit,” he said.

While the Klamath Tribes also hold a time-immemorial instream water right to Upper Klamath Lake through the Klamath Basin Adjudication, tribal council member at-large Clay Dumont said there is a temporary stay on the Tribes’ ability to make water calls in Upper Klamath Lake that impact water rights prior to 1906 (including the Project) until the adjudication is complete. That leaves the ESA as their only option to protect critical habitat for the suckers.

Simmons said he was disappointed to hear of the potential for more litigation in the Basin, though folks on the ag side are still engaged in their own share of court battles surrounding water in Upper Klamath Lake.

“I think there’s a better hope for sucker recovery through a more collaborative effort,” he said. “Everyone can argue as much as they want about lake levels, and hopefully we’ll have more scientific clarity on that from the [U.S. Geological Survey report on how lake levels affect suckers] ... but I think partnerships are the only hope for the suckers.”

The notice letter did express a desire to avoid a potential suit by working with the Bureau to ensure that lake levels remain at or above 4,142 feet this April and May. Gentry said he personally hopes the Tribes don’t have to enter into litigation against the agency.

“We recognize that the Biden Administration has inherited this situation from the Trump Administration,” the letter said. “We therefore welcome your cooperation in an effort to craft a biologically and legally-sound management plan for the spring/summer season of water year 2021 to ensure the continued survival of C’waam and Koptu and the protection of their critical habitat without the need for litigation.”