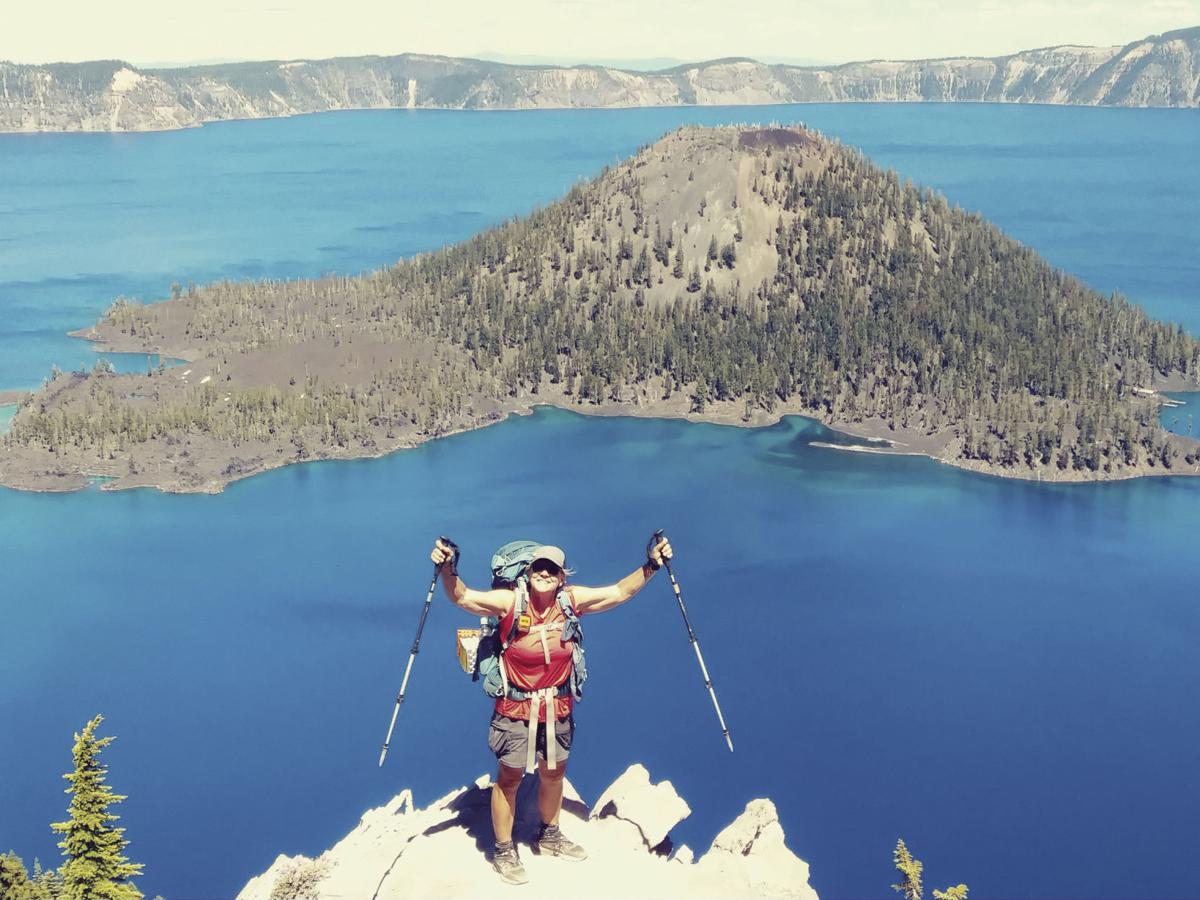 It took Carol Ritter 11 hours to hike the 11 miles around the rim of Crater Lake, “... because it’s so beautiful.” 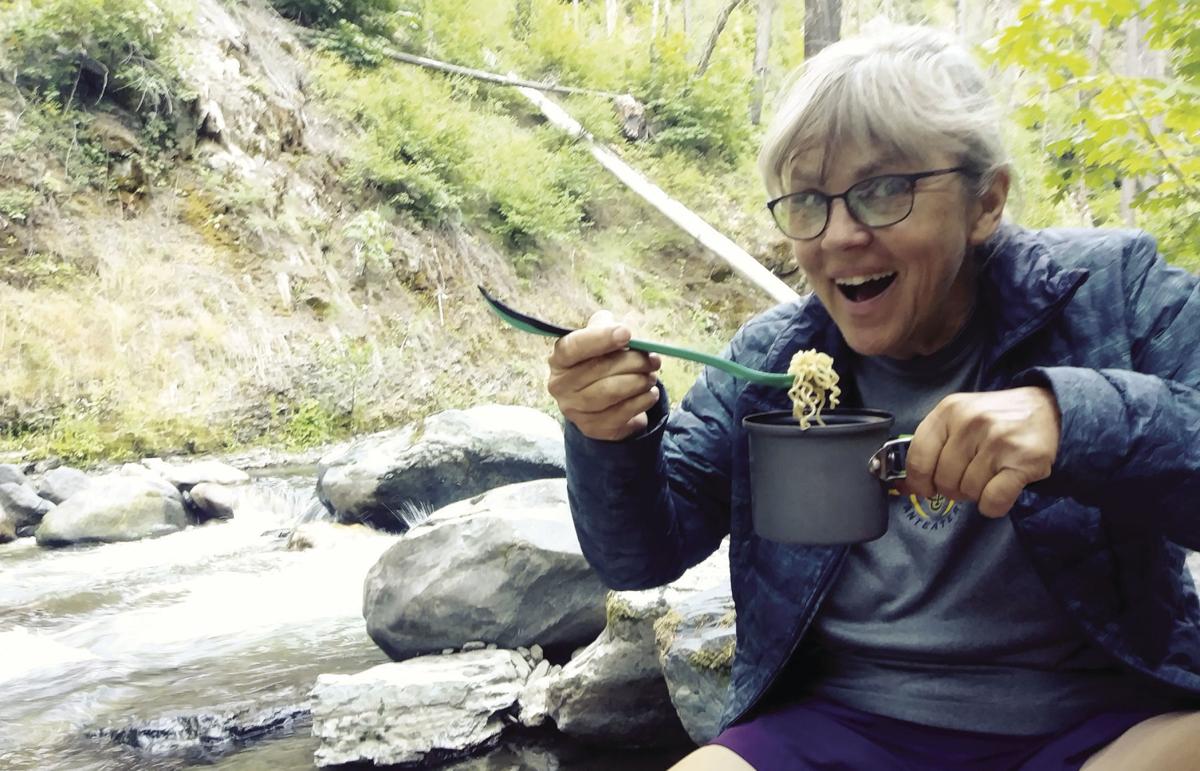 Carol Ritter enjoys a meal of noodles while resting on her journey along the Pacific Crest Trail. 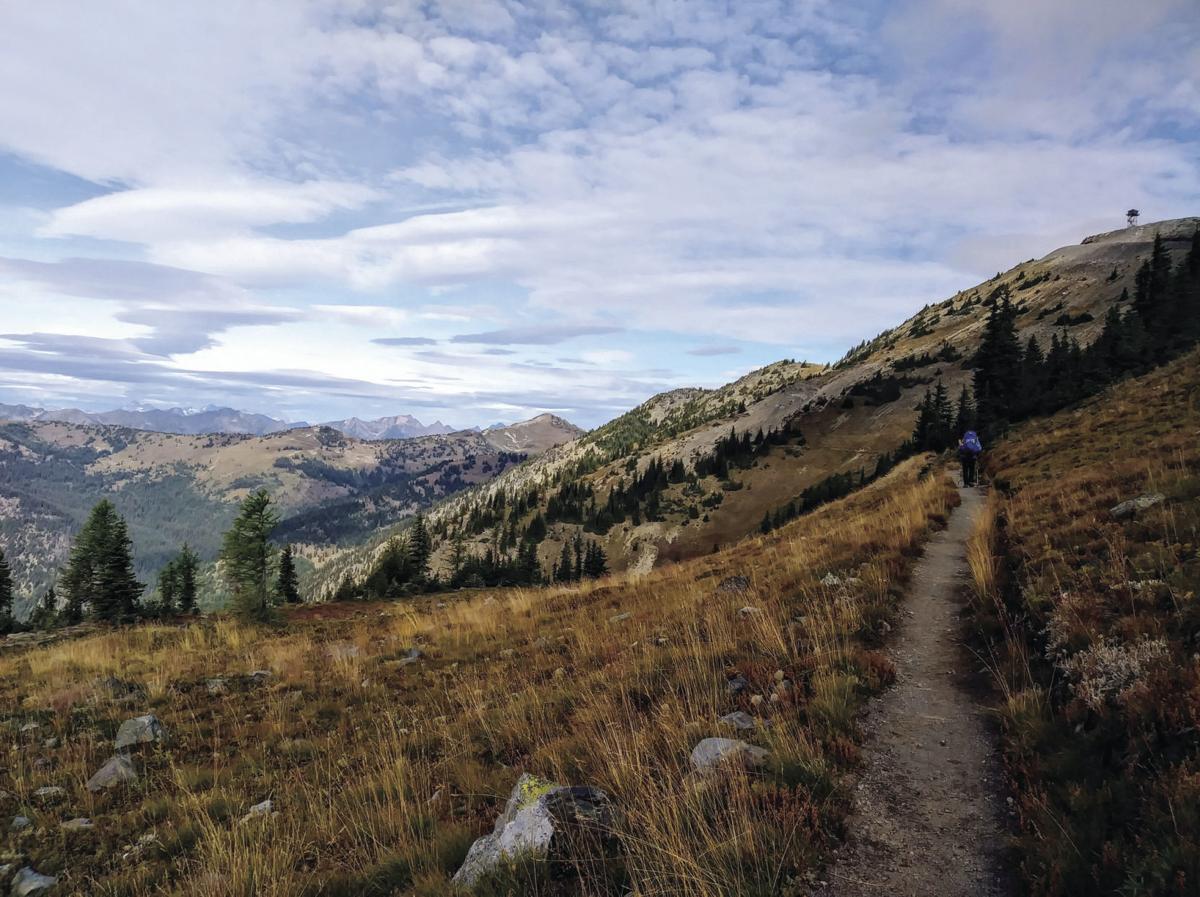 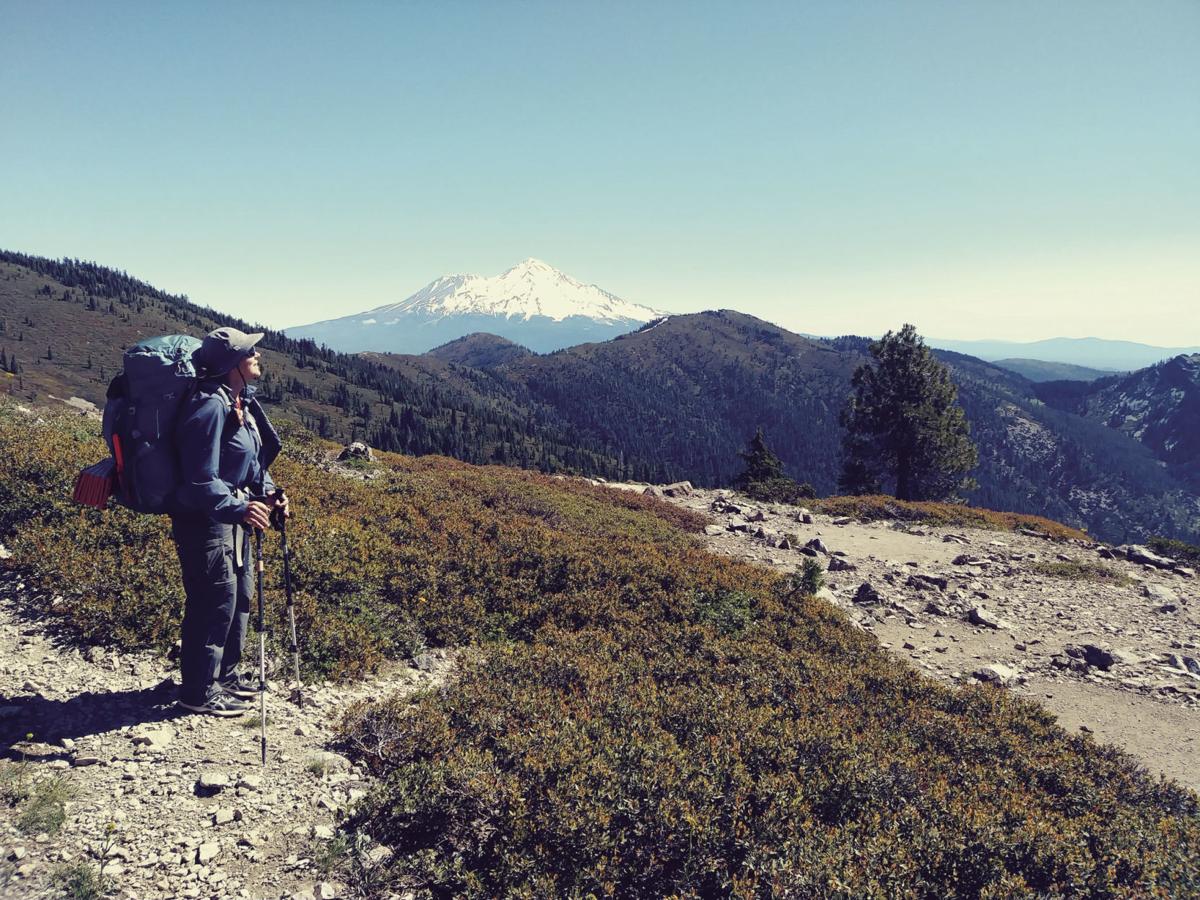 Carol Ritter pauses and takes in the views near Mount Shasta along the Pacific Crest Trail. 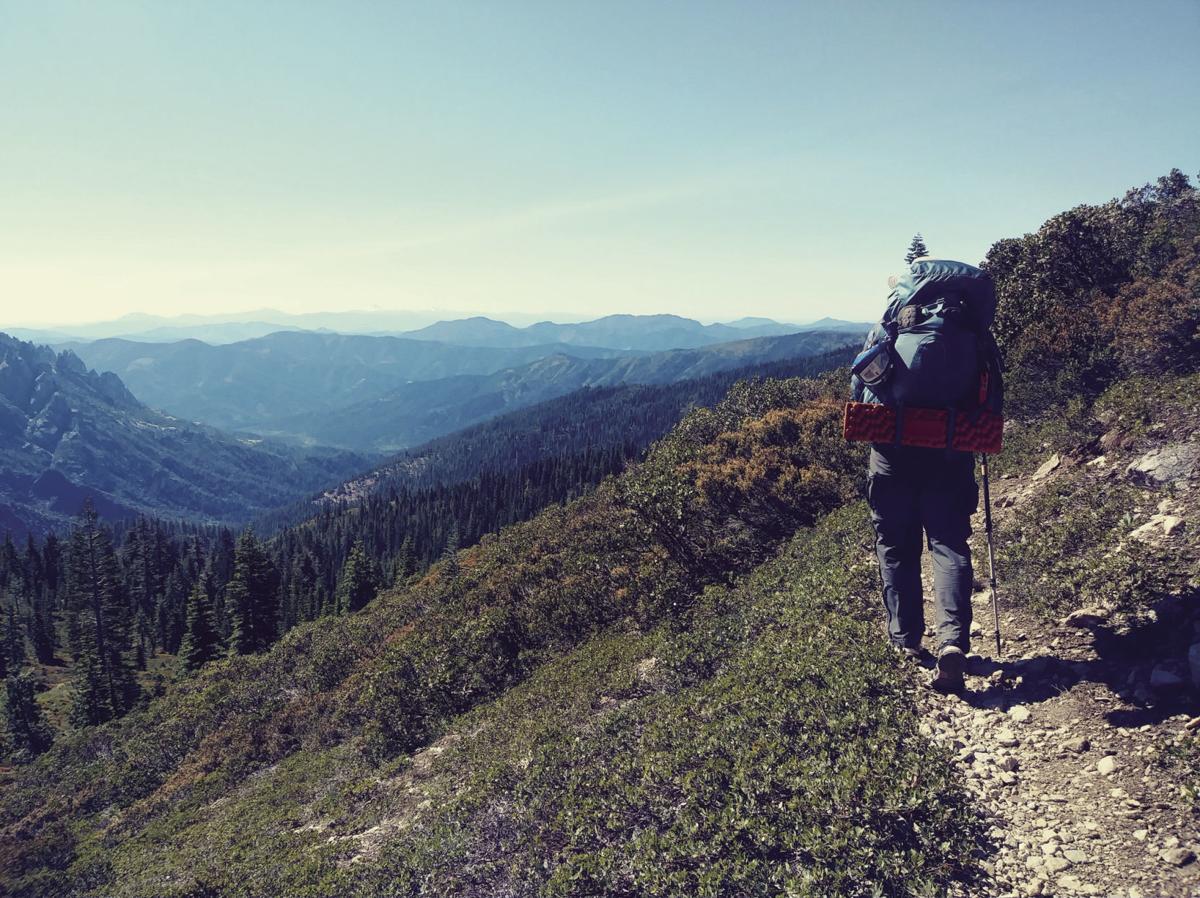 It took Carol Ritter 11 hours to hike the 11 miles around the rim of Crater Lake, “... because it’s so beautiful.”

Carol Ritter enjoys a meal of noodles while resting on her journey along the Pacific Crest Trail.

Carol Ritter pauses and takes in the views near Mount Shasta along the Pacific Crest Trail.

It says something about a person when they say things like, “I only have a little over 700 miles to finish next year.”

Only? For Carol Ritter, 700 miles seems doable because she covered 1,928 miles of the 2,653-mile Pacific Crest Trail this summer despite taking time off to leave the trail to celebrate the birth of a grandson in May. Ritter plans to take care of her unfinished business next summer — and she can’t wait.

“You get out there are you’re in awe because everything’s so beautiful,” she explains.

Ritter, 61, who lives near Bonanza, began her journey in April with her friend Debbie Miller, 66, of Klamath Falls. Because of injuries, however, Miller had to drop out. Ritter returned to the PCT on June 10 but had to bypass the section from Walker Pass in Southern California to Old Station, near Burney, Calif.

Last summer, Ritter rejoined the PCT at Old Station on June 10 and backpacked through far Northern California, Oregon and Washington to the U.S.-Canada border with “Diddly,” Linda Murphy, a Canadian she and Miller met on the trail. Murphy’s trail name is “Diddly” because she “diddled around at camp.” Ritter’s PCT persona is “Best Western” because she stayed at a Best Western motel at Cajon Pass in Southern California.

After logging 15 to 20-plus miles a day in June, Diddly hurt her foot, which resulted in a slower pace and less miles over following weeks. Ritter didn’t mind — she enjoyed the scenery and friendship. “That was one of my choices, to stay with her,” says Ritter, who experienced only some early-on blisters. “My feet were very happy.”

Ritter was happy, too.

“The beauty and diversity of the landscape. Every day it can change, from a forest up to a high mountain pass to shale and even lava rock and back into valleys where there are lakes. We didn’t want to rush,” Ritter tells of appreciating the experience. “You get out there and you’re in awe because everything is so beautiful ... The size and scope of the mountains. Campfires and hiking and meeting with friends. Washington was a surprise to me because it’s so beautiful.”

When Ritter looks back she smiles remembering favorites places — Goat Rocks in Washington and the “really, really beautiful” Mount Jefferson region in Oregon. Places she envisions returning to for shorter backpacking trips or day hikes include The Marble Mountains and the Trinity Alps. “I had no idea how wonderful they are, and they’re so close to home.”

She and Murphy seriously slowed down while hiking along the rim at Crater Lake National Park. Why? “It took us 11 hours to hike 11 miles because it’s so beautiful.”

Drawbacks? “A lot of mosquitoes,” Ritter recalls, laughingly telling. “As soon as we crossed Highway 140 (by Fish Lake) “we weren’t hiking. They were carrying us.”

The biggest adrenaline rush came as they neared Manning Park at the U.S.-Canada border “The last week we kept counting down. You come around a corner and there it is,” she remembers of reaching the marker on Sept. 13. “We whooped and hollered ... We all just sat down and cried ... There was a little sadness because it was over.”

But the surprise challenge was coming home. She and her husband, Paul, who was there at the finish, drove home in two days. “I hadn’t sat that long in five months. It was really tough.”

Over for this year, but not done. For Ritter there’s some unfinished business, only 700 or so miles.

But her journey along the 2,653-mile long PCT was temporarily halted after 650 miles so that she could return for the birth of a grandson, Beckham. Ritter’s daughter, Kaylene Mahaffey of Talent, gave birth on May 21.

With permits in hand, they left from Campo, the starting point for the PCT at the Mexico-U.S. border, on April 3. Until taking their Baby Break, they’d been averaging 17 to 18 miles a day, with a long day of 22 miles. Their on-trail routine includes waking up at 5:30 and, if hot temperatures were forecast, being on the trail by 6 o’clock. They’d been making camp between 4 and 6 p.m., depending on access to water and logical camping sites.

All in a day

“We got into a pretty good routine,” Ritter says.

That routine included carrying a backpack weighing about 26 pounds, or sometimes adding up to another 9 pounds of extra water on days when streams or other places to resupply water supplies were less available. Ritter and Miller used a cell phone app, Guthook’s PCT Guide, that provides information on places to refill water, camp and make stops at hiker friendly places where they can take showers, do laundry and replenish food supplies.

Although she’s enjoyed day hikes, Ritter says she’s relatively new to backpacking. “I pretty much just started last year. I’m pretty much a rookie ... I got the inkling to do the PCT when we were doing some hikes around here with my husband (Paul).” When the youngest of her five children graduated from high school, she put her PCT plans in motion.

Back to the trail

Surprises along the early section of the trail were positive, including abundant floral displays of cacti, yucca, Joshua trees and wildflowers. Ritter’s favorite sight was hiking up Skinner Peak where, “We got our first good view of the Sierras.”

Most nights weren’t that comfy. No motel rooms with beds, but in sleeping bags in tents. But Ritter and the others experienced “Trail Magic.” At one campground they were greeted by people with copious supplies of soda, water, beer and fruit. While crossing Tehachapi Pass, “magic” was a picnic area with umbrellas, chairs, water, fruit, snacks and a guest book.

“Everyone’s friendly with everyone else because we’re there for the same purpose, the same common goal,” Ritter says of the trail magic provided by people along the way and friendships between the hikers. She’s noticed the vast majority of thru-hikers are “20-somethings and 50-plus,” people either not with families or in their retirement years, along with “A lot of people from out of the country who’ve come to hike the PCT.”

Many thru-hikers focus on completing the entire PCT, not varying from the designated route, something that proved unusually challenging this year because of late, deep snow in the Sierras. Ritter says she and Miller shared the goal of reaching Canada, but she emphasizes they’ve also focused on enjoying their journey.

“Yes, we want to finish but we want to experience the trail along way, to see the pretty places,” Ritter says.

Carol Ritter wasn't wild about the movie, "Wild," based on the mega-seller book by Cheryl Strayed.

"I was disappointed. I didn't feel like they showed the beauty of it," Ritter said, referring to the sights she saw and experienced during her months along the Pacific Crest Trail.

Instead, Ritter suggests people planning to hike to PCT, whether on day hikes, overnight treks or the entire trail, instead read "Hikertrash: Life on the Pacific Crest Trail," by Erin Miller. "That really sparked my interest.”