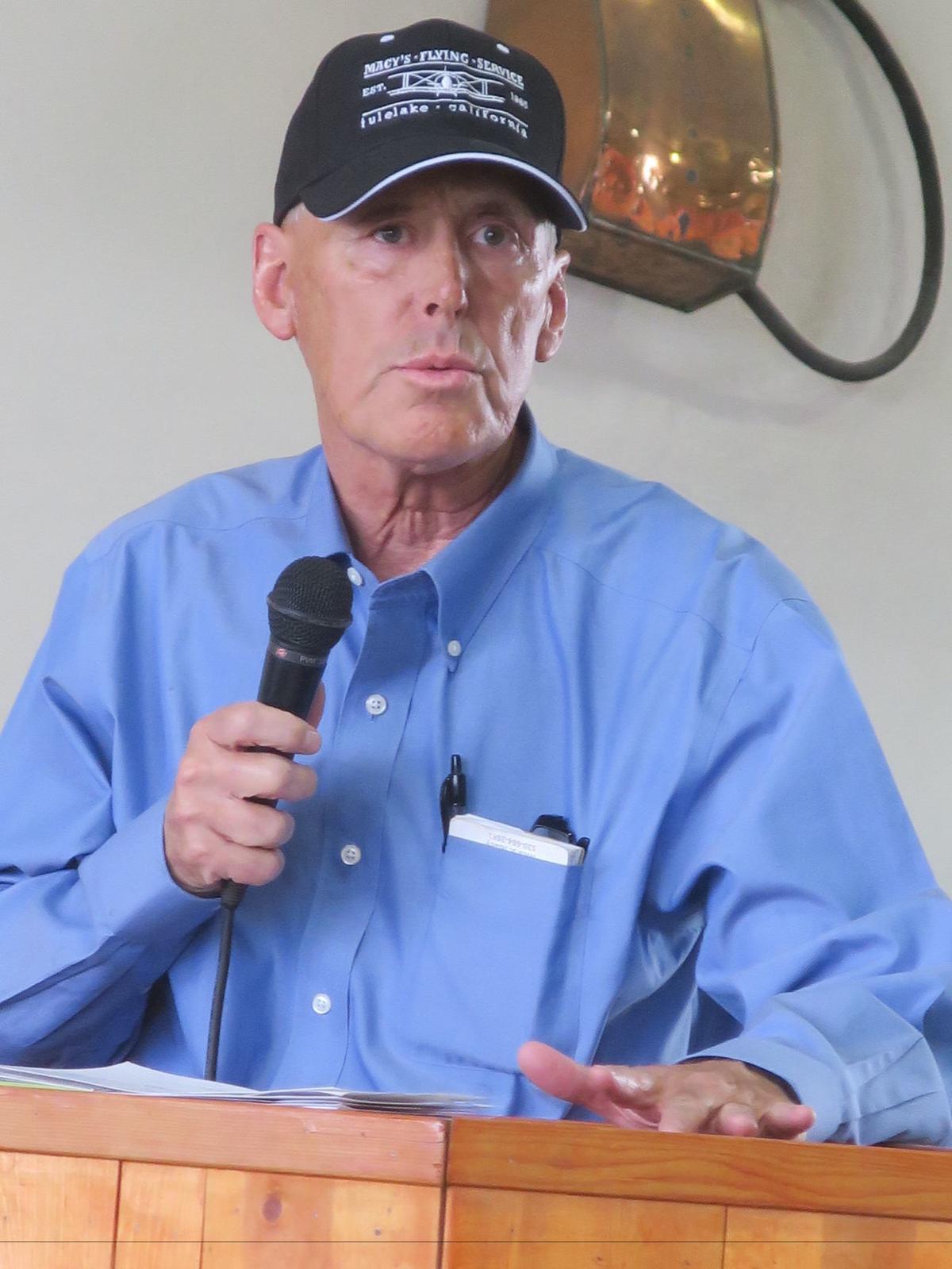 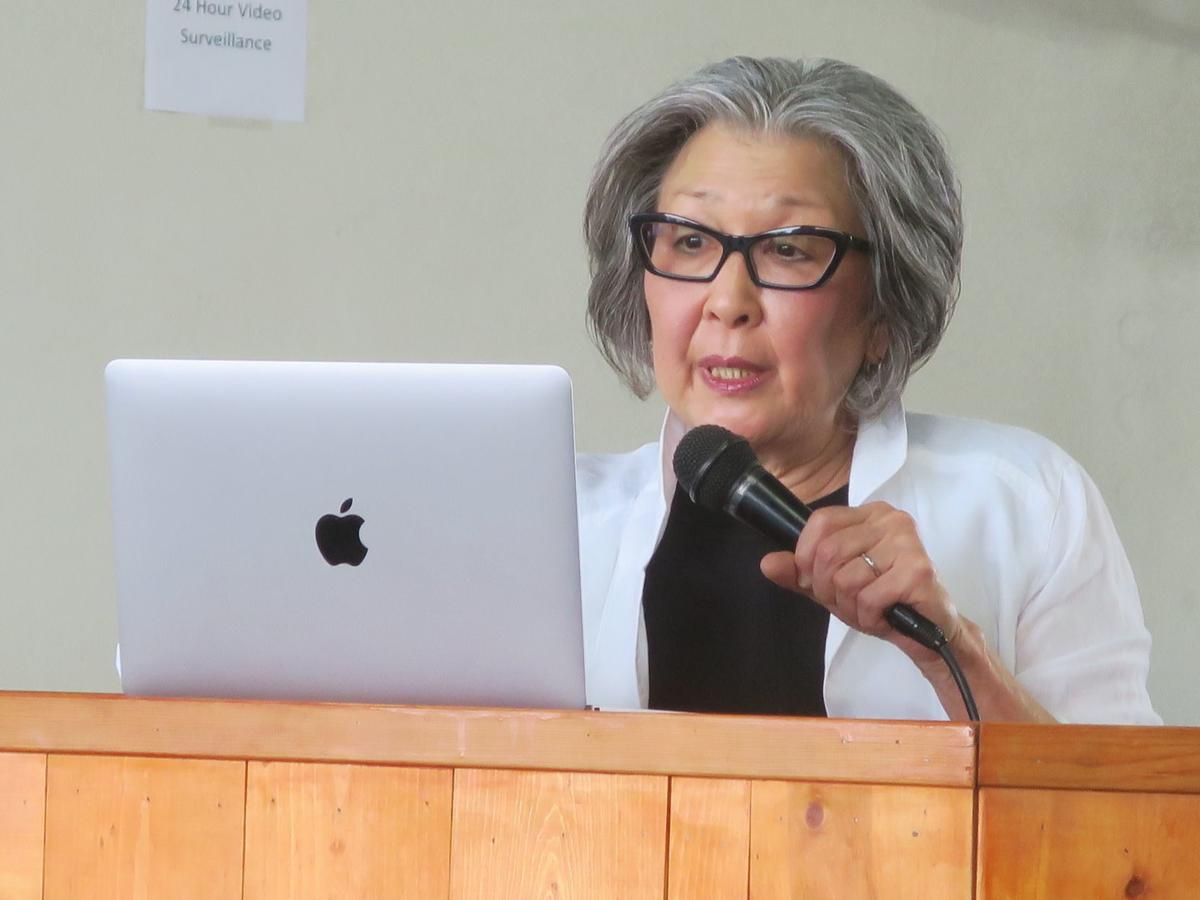 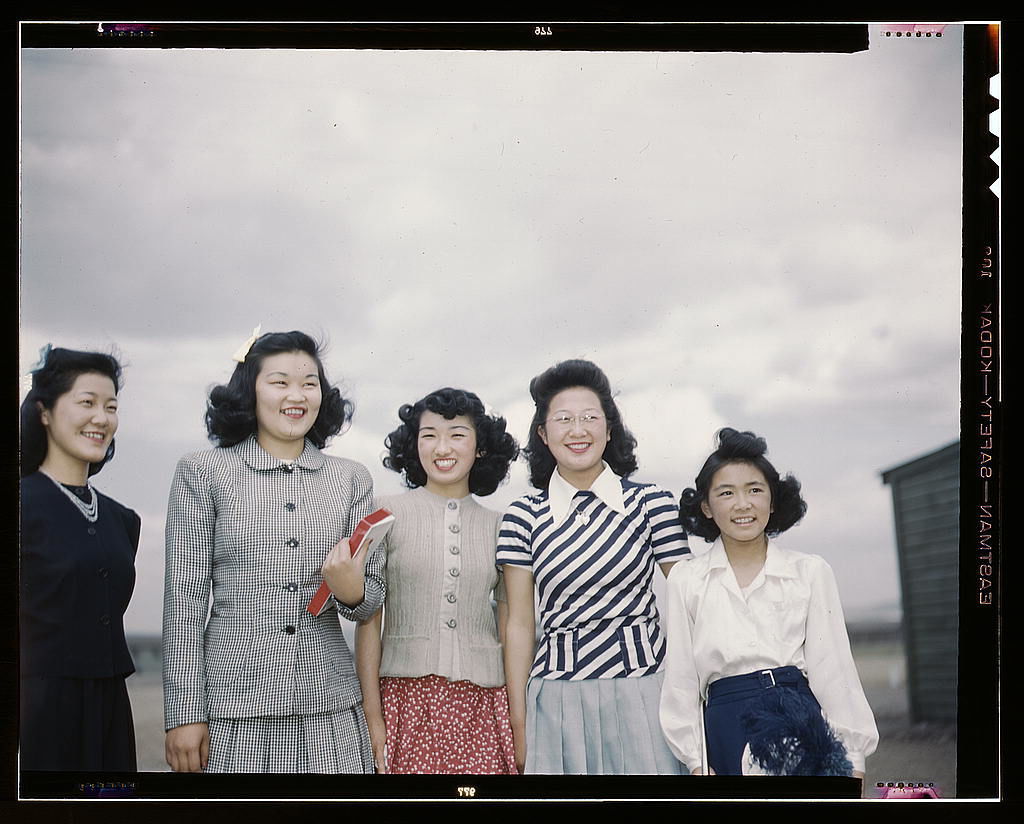 A group of women pose for a photo at a Japanese-American camp at the Tule Lake Relocation Center in Newell, Calif in 1942 or 1943. 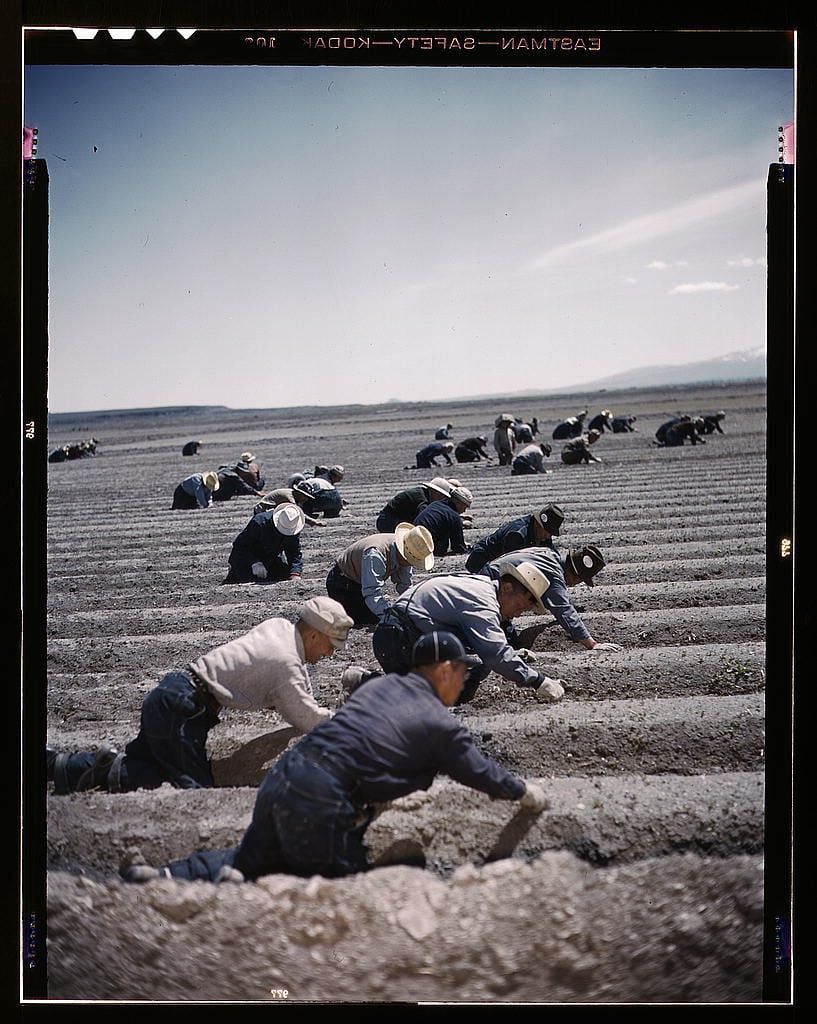 Japanese Americans at the Tule Lake Relocation Center transplanting celery in 1942 or 1943.

The controversy over the 2018 sale of the Tulelake Municipal Airport by the Tulelake City Council to the Modoc Tribe of Oklahoma remains simmering.

In July 2018, the Tulelake City Council unanimously accepted a bid from the Tribe, which is now known as the Modoc Nation, to buy the airport for $17,500, a cost that city officials said covered the city’s legal fees. The Tule Lake Committee, which includes Japanese Americans who were incarcerated at the World War II Tule Lake Segregation Center and their descendants, and Modoc County both submitted bids, with the Committee offering $40,000. Modoc County matched the Tribe’s $17,500 bid.

In making the Tribe’s offer, Blake Follis, then the Modoc Nation’s attorney general, said the Tribe would try to expand aviation activities at the 359-acre airport, which is actually in Newell. (The airport is seven miles southeast of Tulelake, which is in Siskiyou County, and is actually in Modoc County. The airport is leased to and maintained by Modoc County. When the airport was created, it was stipulated the land must be used as a municipal airport and, if not, the land would revert to the federal government.)

The airport includes about two-thirds of the residential area of the Tule Lake Segregation Center where more than 27,000 Japanese Americans, two-thirds of them U.S. citizens, were incarcerated from 1942 to 1946.

Rob Burkybile, the Modoc Nation’s operations manager, said the Tribe is studying airport development plans that could help to stabilize and improve the Tulelake Basin’s economy. He emphasized there are no plans to develop a casino, as some people have speculated. Ideas being considered include using the airport as a place to buy fuel and to export agricultural products outside the Tulelake Basin.

Nick Macy, owner of Macy’s Flying Service, an agricultural service based at the Tulelake Airport since 1965, said that since the sale the airport’s business operations have continued as normal. Macy Flying employs 35 to 40 people seasonally, making it the Tulelake Basin’s largest single employer. Macy declined to comment on what airport-related services might be added by working with the Tribe.

Following the sale, the Tule Lake Committee filed a federal civil rights lawsuit in U.S. District Court for the Eastern District of California in Sacramento challenging the transfer. In opposing the sale, Barbara Takei, the Committee’s chief financial officer, terms the airport “hallowed ground, where hundreds of Japanese Americans died from illness, harsh conditions, and despair.”

She said the case went before a U.S. magistrate judge for discussion of voluntary settlement in September 2018. “The magistrate judge foresaw litigation in our case continuing for decades, in a drain of time and money for all parties,” Takei said in a statement. “The judge recognized that the only long-term solution was to move the airport to another location, and directed the Tule Lake Committee to obtain evidence that the federal government would accept the airport property for preservation purposes.”

The judge sealed the case, which meant the involved parties, including the Modoc Nation, which is handling legal matters for the City of Tulelake, and the Tule Lake Committee were prohibited from issuing press releases or making public comments on the case. The gag order was lifted last September and, according to Takei’s statement, “since then, we have awaited a ruling in our civil rights lawsuit. Once the judge issues an order in Tule Lake Committee v. City of Tulelake, et. al., our lawyers can move ahead and begin preparation for trial.”

Tulelake Mayor Hank Ebinger said the city is not involved in the proceedings because the Modoc Nation is handling legal matters and covering the expenses. “We’re really not involved anymore in regards to the airport’s ownership,” Ebinger said, emphasizing. “We believe the airport was legally transferred. The airport is important to our economy.”

A proposal to relocate the existing Tulelake Municipal Airport includes a qualification that a new airport would be operating and functional before the current airport would close.

Because it is only a proposal, there are no cost estimates for building a new airport or for removing the existing airport’s runway and facilities. It is also unknown how relocation would be financed.

The Tule Lake Committee has suggested the airport could be relocated to the former 927-acre Over the Horizon Backscatter receiver station on Modoc National Forest lands about 35 miles southeast of Tulelake.

Macy said he believes such a move is not feasible, citing concerns that the proposed site is too distant from Tulelake and Newell, and that it would require flying over or between mountains and power lines.

Macy said if the land used for the existing airport had not been developed as an airport it possibly could have been subdivided into housing for the community of Newell.

“The airport is where it needs to be,” Macy said. “It’s the perfect spot. The airport belongs to the community.”

Takei said the Committee is pressing forward in its effort to challenge the airport giveaway despite “what we see as interference from the Modoc Tribe of Oklahoma and its lawyers.

Despite the interference, we obtained evidence from past and present government officials, and we are prepared to challenge the airport giveaway. While we hope to work with leaders of the Oklahoma Modoc to diversify and benefit the region’s economy, the tribe’s leaders gained acceptance in self-proclaimed ‘white man’s country’ by working against us, promising to develop aviation there. Such activity is incompatible with preservation and will desecrate the one-half square mile of airstrip land where our families lived and died during WWII.”

She also questioned the Tribe’s motives, saying, “The Oklahoma Tribe says their goal is returning to their ancestral homeland, a 5,000-square-mile area, but their fixation on destroying the one parcel important to Japanese Americans remains a mystery.

Equally bewildering, the Oklahoma Modoc have chosen to ally with farmers, irrigators and ranchers who want government-subsidized water, and are working against the Klamath Basin’s indigenous people (the Klamath Tribes) whose goal is protecting and restoring ancestral habitat and sacred endangered fish. Like rival tribes who scouted for colonial U.S. Army units a century earlier, leaders of the Oklahoma Modoc are allying themselves with white adversaries to undermine other Native Americans.”

Takei noted the Tribe, the smallest in Oklahoma with less than 300 enrolled members, last year disenrolled 15 members of a four-generation Modoc family “to punish Cheewa James, who questioned the Oklahoma Modoc’s ‘rent-a-tribe’ business model.” James, who worked as a seasonal park ranger at Lava Beds National Monument, site of the key battles of the 1871-72 Modoc War, is a long-time Modoc advocate, historian and author of books about the war and the Tribe’s forced relocation to Oklahoma.

“James questioned the Modoc tribe’s use of tribal sovereignty to avoid compliance with state laws that regulate predatory payday loans and use of tribal status to help government contractors avoid or minimize competitive bidding requirements,” Takei wrote, referring to court cases where the Tribe was fined more than $4 million in a payday loan scheme that charged illegal interest rates in excess of 700 percent and, according to documents, laundering the proceeds through bank accounts held by the Modocs and other tribes. Court documents say the Tribe admitted payday lending businesses were established on tribal land but the Tribe had no “meaningful role in the enterprises.” Native American tribes answer only to the federal government, which has no usury statues for payday loans.

The Committee is contesting on another front. Along with the Modoc Nation suit, Takei said the Committee is continuing effort to stop Modoc County and the Federal Aviation Administration from a proposed five-year, $3.5 million construction program, which includes building a three-mile-long, eight-foot-high fence that officials say is needed to prevent possible collisions between airplanes and wildlife.

“Tulelake’s airstrip development has been universally opposed by the Japanese American community, with over 45,000 individual Japanese Americans, organizations and supporters writing to the FAA and Modoc County to express opposition to the proposed security fence for the airstrip,” Takei said in the statement. “All have urged that the Tulelake Airstrip be relocated because a sacred historic site where more than 27,000 Japanese Americans were imprisoned — and where 331 men, women and children died — cannot be moved.”

In 2014 and 2017 the Committee filed legal petitions saying Modoc County, which leases the airport to Macy’s Flying Service, is obligated “to study historic, cultural and environmental resources before any fence construction can begin.” Takei said the study is being done but the Committee is upset that it will only include property along the proposed three-mile-long fence line, not the entire segregation center site. Takei said the study is expected to be completed this spring.

Next in the series: