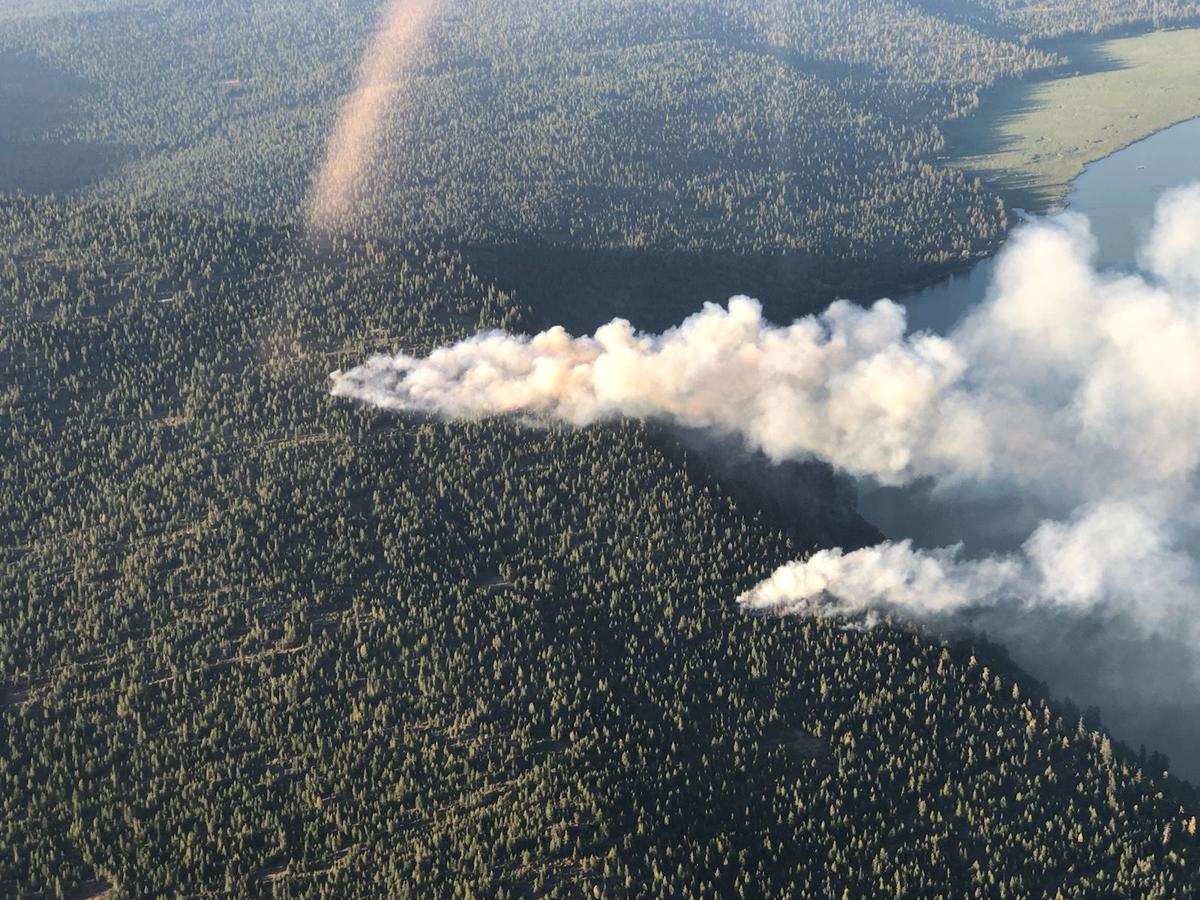 The main Spence Fire (top left) and a spot fire (bottom right) on the evening of July 15. The smoke remains relatively horizontal because of intense winds out of the northwest that pushed the fire toward the lake. 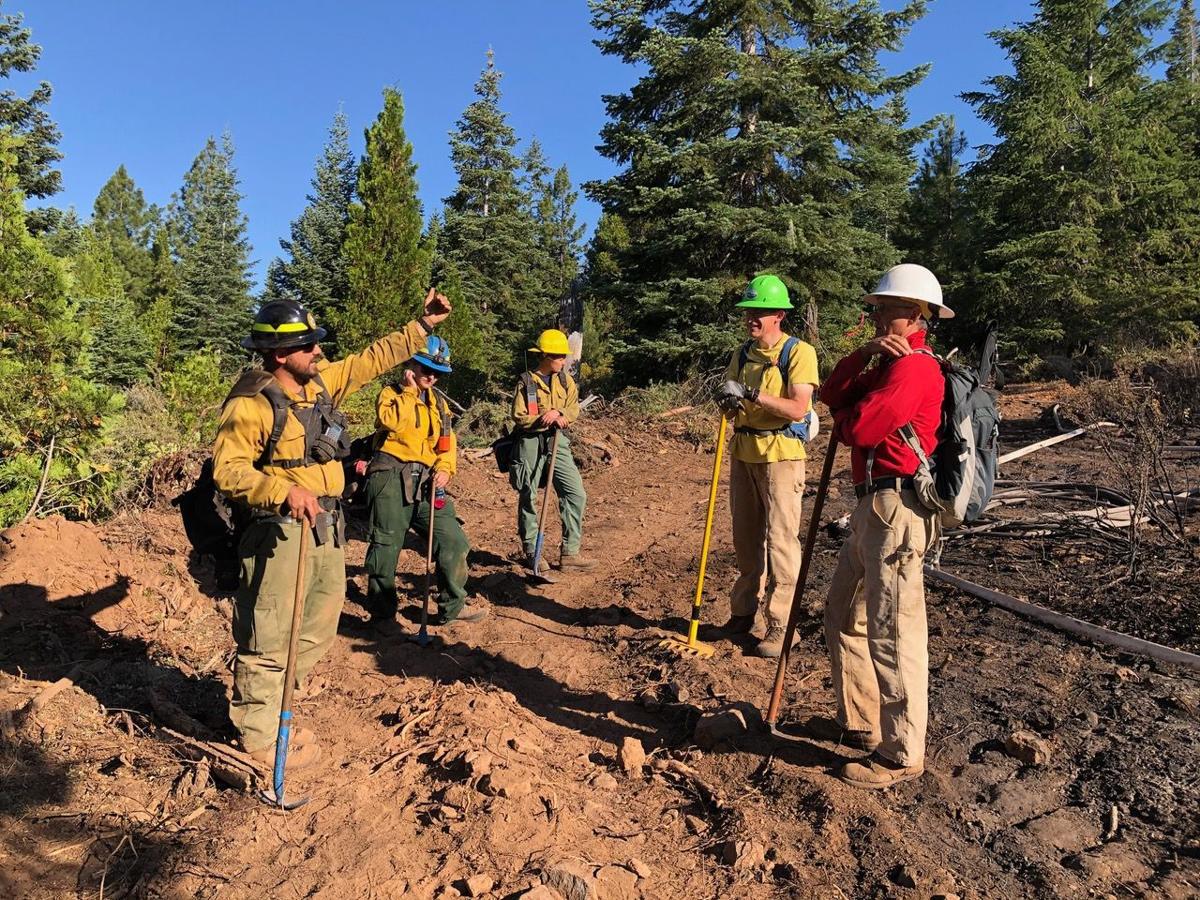 ODF staff and KTA members assess the damage to the South Ridge Trail. 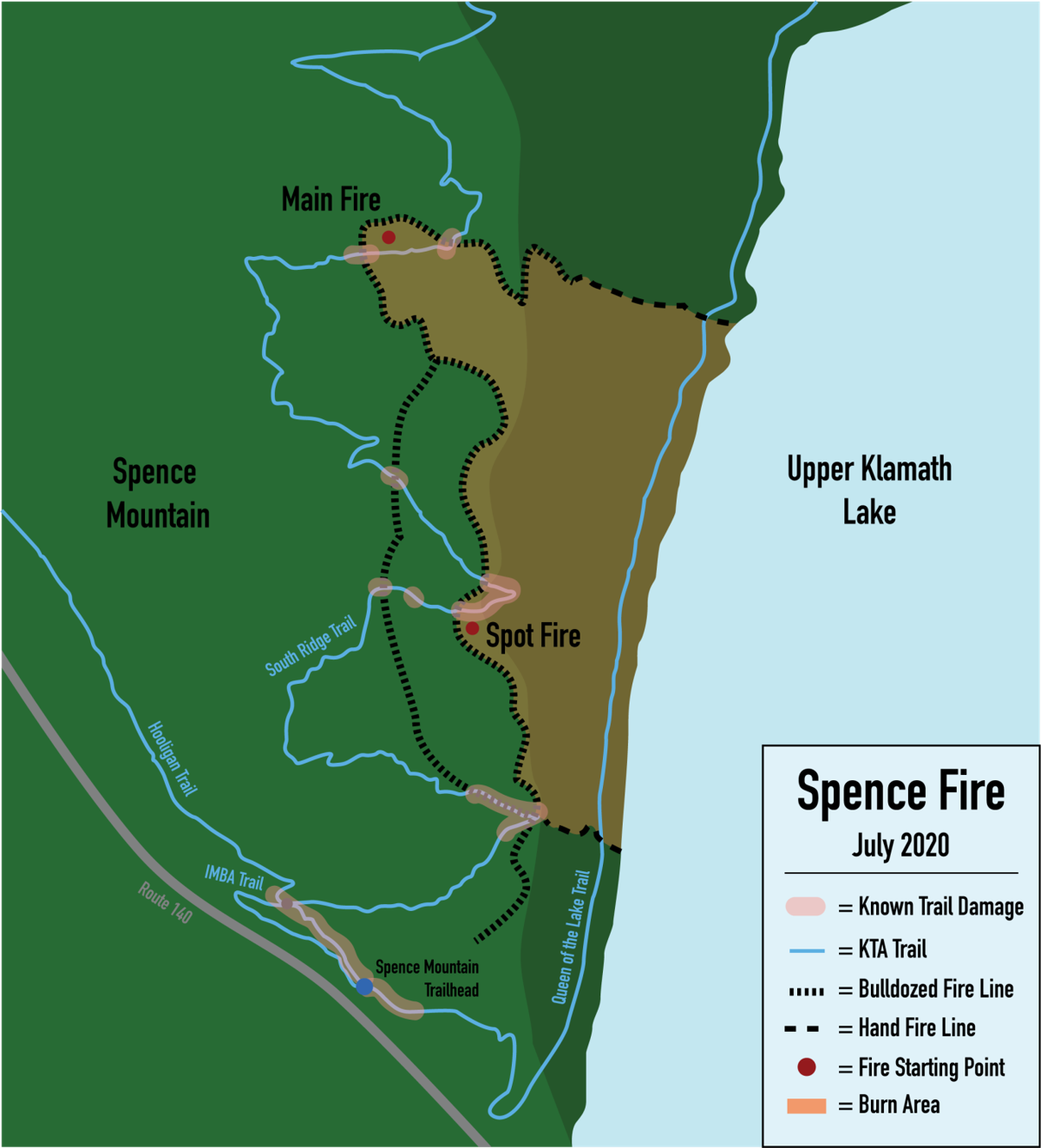 A map of the Spence Fire and affected KTA trails, adapted from the Oregon Department of Forestry and Klamath Trails Alliance. 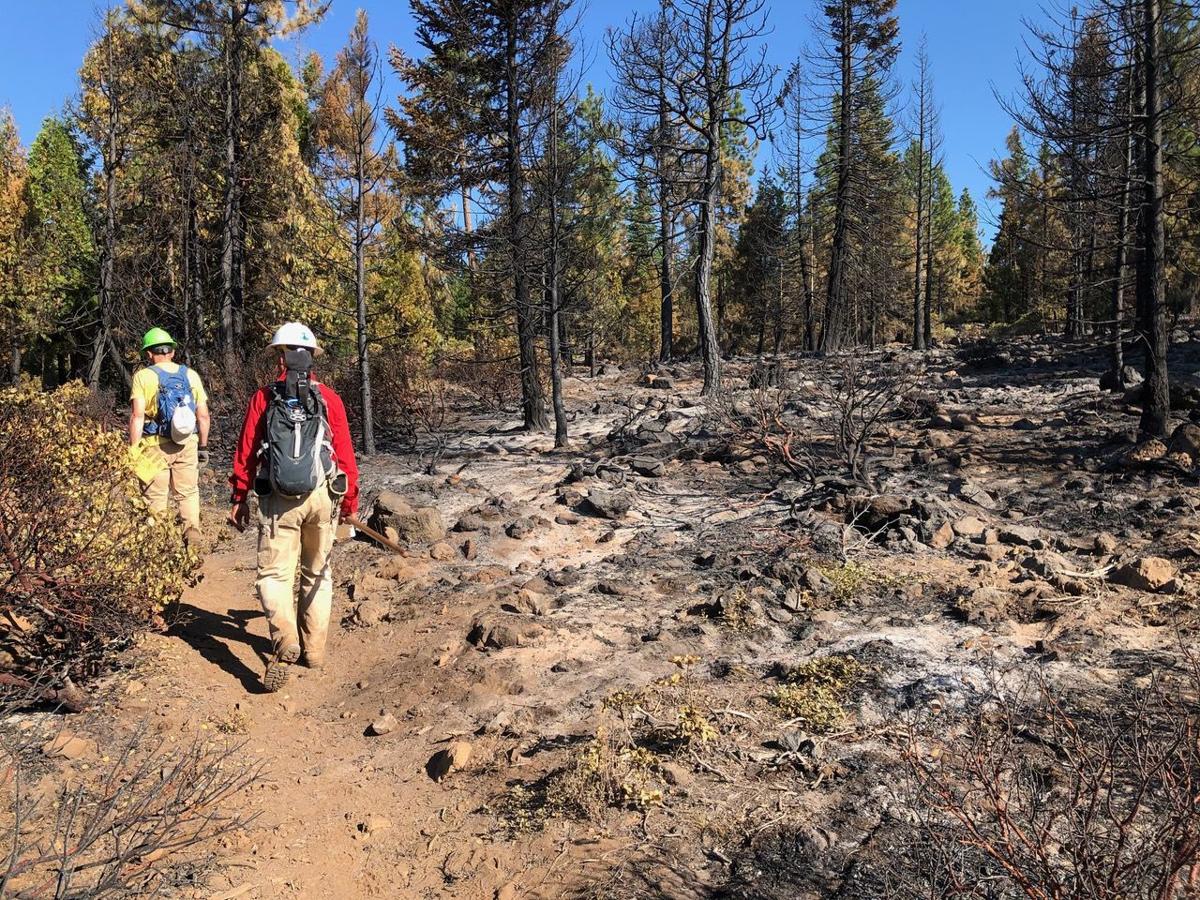 In small spots dotted along the rim, intense fire scorched entire trees. But the majority of the 83-acre fire spared the tall pines. 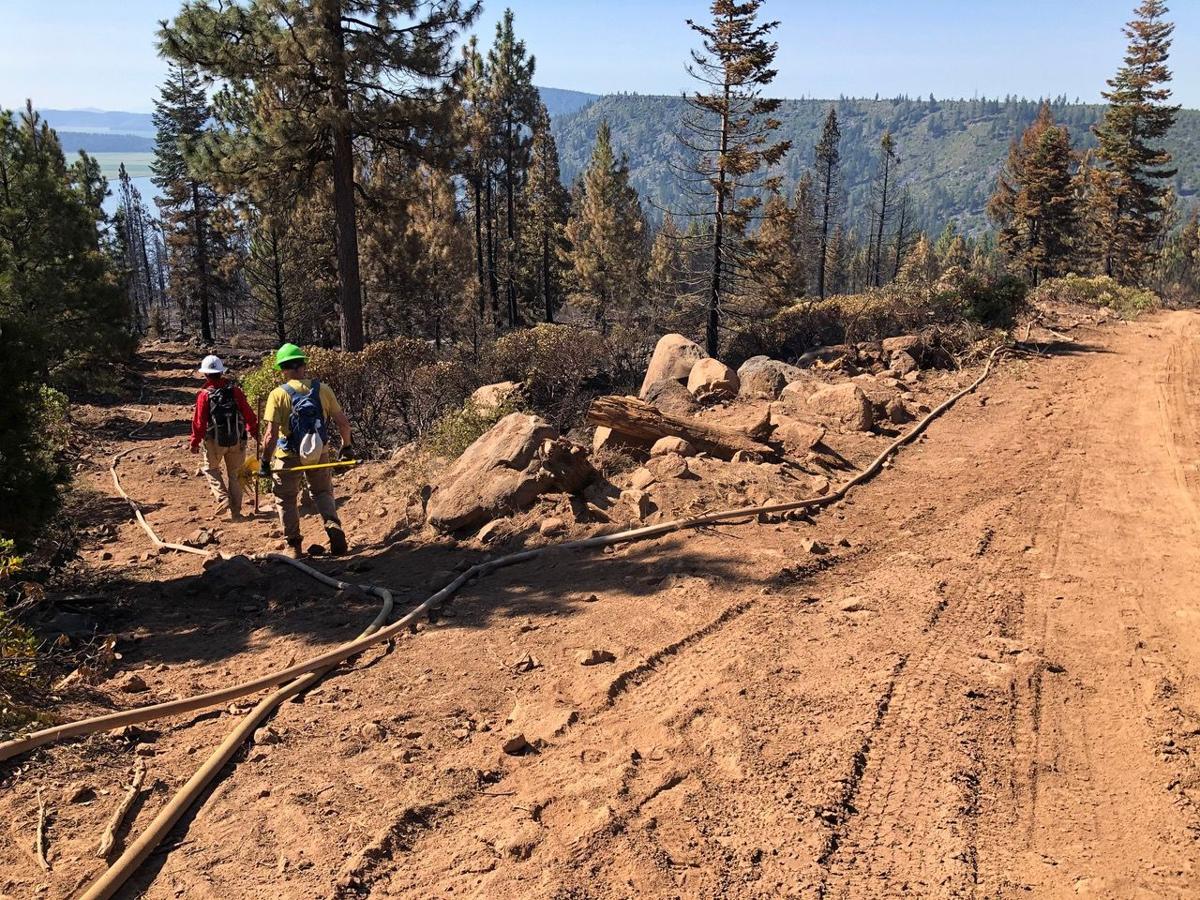 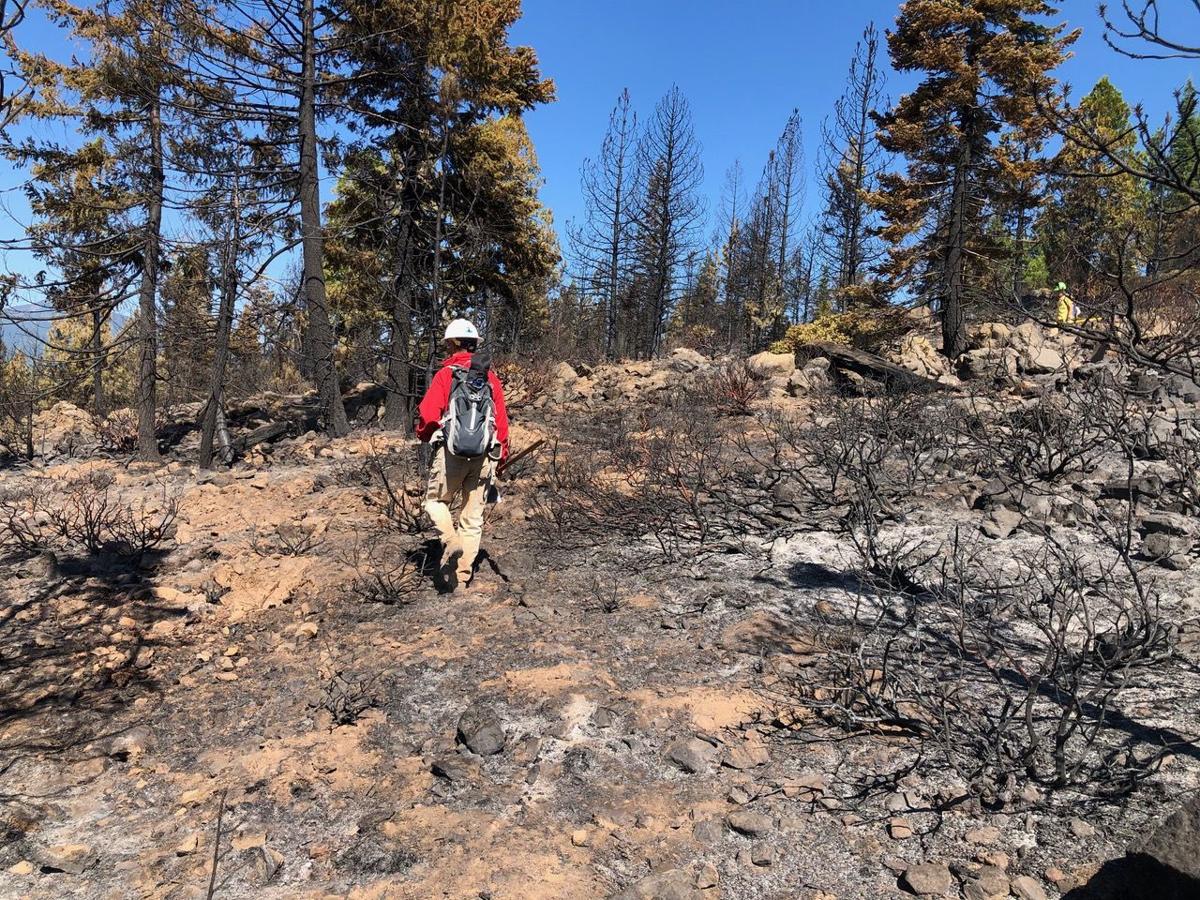 KTA's network of volunteer trail rehabbers has been given the go-ahead by ODF to begin restoring the South Ridge trail. 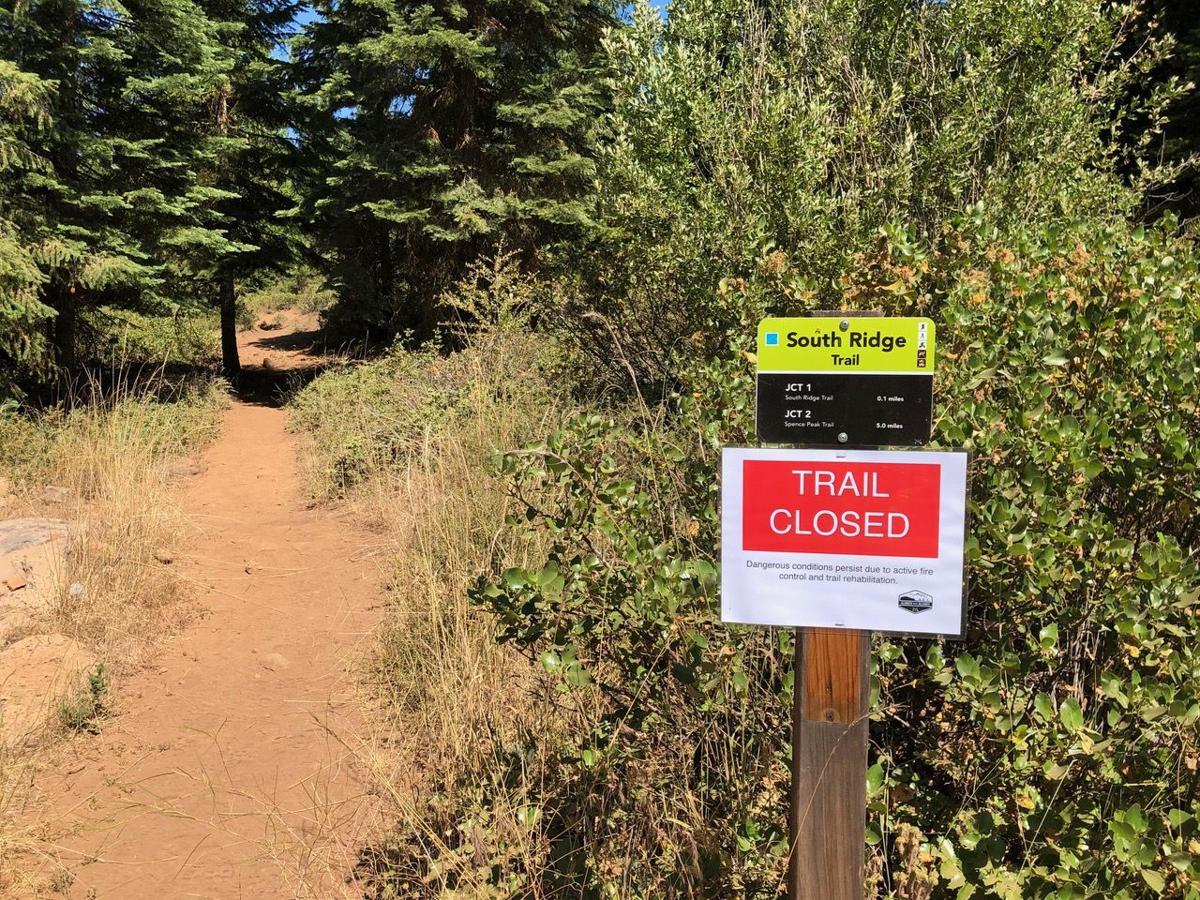 The main Spence Fire (top left) and a spot fire (bottom right) on the evening of July 15. The smoke remains relatively horizontal because of intense winds out of the northwest that pushed the fire toward the lake.

ODF staff and KTA members assess the damage to the South Ridge Trail.

In small spots dotted along the rim, intense fire scorched entire trees. But the majority of the 83-acre fire spared the tall pines.

KTA's network of volunteer trail rehabbers has been given the go-ahead by ODF to begin restoring the South Ridge trail.

At 4:43 p.m. on July 15, a fire detection camera atop Hogback Mountain spotted smoke billowing off the south ridge of Spence Mountain. The flames had started near the South Ridge Trail, then continued up the ridge’s western flank toward a rim overlooking Howard Bay.

The fire gained intensity as it sped through patches of dense forest, where a combination of highly flammable short and tall brush made it burn hotter and ascend into the pines. A strong northwest wind pushed the blaze further up the ridge, imbuing it with oxygen.

Smoke launched burning embers into the air, and a tiny shift in wind from off the lake sent them south, along the flank to a bed of extremely dry brush. That ignited a second blaze that began moving in the same direction.

The unrelenting wind kept the smoke low in the sky and propelled it southeast across Upper Klamath Lake. By sunset, a thin trail of it stretched across Klamath Falls, obscuring Mt. Shasta in a rust-colored haze. The scent of scorched trees wafted through the air, alerting residents to the city’s first wildfire of 2020: the Spence Fire.

Once the fire hit the rim at nightfall on Wednesday, it had completed its most intense period of burning. Crews were quick to begin their initial attack that night, using bulldozers to sculpt fire lines west of the rim. The next morning, they put fire lines north and south of the blaze by hand.

Strong northwest winds continued to push the fire toward the lake, but after clearing the rim, its only path was downhill. Fire naturally wants to move uphill, so the “backing fire” became sluggish and less intense as it crept toward the shore, burning more understory than trees. Because the ridge’s eastern face is so steep and rocky, it would have been difficult for crews to attack the fire there. So the weakened blaze was a blessing.

On Thursday night, a few ember-like pockets of red dotted the eastern flank. The next morning, the fire was at 78 acres and 60 percent containment. Randall Baley, protection unit forester for the Oregon Department of Forestry Klamath-Lake District, said things could’ve gone a lot worse.

“The crews did magnificent hard work,” he said. “In 72 hours, that fire was pretty much a done deal.”

At 83 acres, the Spence Fire officially reached 100 percent containment on July 22 and has entered patrol status. Crews will survey the burn area for hotspots once a day for the next couple weeks, after which they’ll do more sporadic checks until the end of August, according to Oregon Department of Forestry public information officer Jennifer Case. Residents can still expect occasional pockets of smoke to emanate from Spence Mountain over the next month.

Baley said the wind was a big factor in the initial intensity of the fire. A rigid low pressure system to the northwest pushed air toward high pressure areas near the Four Corners for more than a month. The constant infusion of oxygen made it difficult for crews to control the flames before they cleared the rim. But the fire’s proximity to the lake worked in their favor.

“An advantage we did have was having the natural barrier of the lake in the opposite direction,” Baley said.

With solid containment established to the north, south and west, the fire had nowhere to go once it reached the shore.

Firefighters were not so lucky in 1994, when more than 1,000 acres burned on the steep ridge west of Route 140 across from the Spence Mountain Trailhead. That fire sped uphill, hopping from tree to tree and eviscerating the vegetation.

“It was pretty much totally scorched,” Baley said, adding that 2020’s Spence Fire resulted in damage that was more “mix-and-match.”

About 10 acres were severely burned, made up of roughly 1-acre pockets of charred trees scattered throughout the total burn area.

The fire closed four trails on Spence Mountain that are operated by the Klamath Trails Alliance and the Spence Mountain Trailhead off Route 140. The four affected trails — IMBA, South Ridge, Queen of the Lake and Hooligan — total about 12 miles. Drew Honzel, a KTA board member, said more than 30 miles of trail are still open off the Shoalwater Bay Trailhead to the north. KTA has installed signage where those trails intersect with damaged ones to prevent users from traveling into fire-affected areas.

KTA members toured the damage with ODF staff on Monday, where they found that much of the damage occurred on the South Ridge and Queen of the Lake Trails. Honzel said he noticed roots that had burned and left holes in the ground at some locations on South Ridge, which have to be filled in. The biggest repair, however, will be restoring sections of the trail that were damaged by bulldozers establishing fire lines.

“It’s a very small price to pay for getting the fire under control,” Honzel said.

Honzel said Queen of the Lake, which runs directly through the burn area along the shoreline, is too treacherous to access right now due to smoldering hotspots, fallen trees and dislodged rocks. That makes it difficult to assess damage done to the trail, but since the fire was less intense by the time it reached that point, Honzel said it’s possible that things may not be too devastating.

“We’ve got a good network of volunteers,” Honzel said. “We just need to organize the effort, and that involves getting people who know how to cut new trail.”

But the repairs mean the Spence Mountain Trailhead will likely remain closed for much of the remaining summer. Honzel said ODF officials gave KTA the go-ahead on Friday to start the rehab, and he hopes South Ridge and Hooligan can reopen by mid to late August. Queen of the Lake, however, will probably stay out of commission for the remainder of the season as fire crews continue to monitor the burn area and steep conditions make restoration difficult.

Spence Mountain is privately owned by timber company JWTR, which works with KTA to maintain the land for trail use. Matt Wendt, who represents JWTR and has used the trails himself, said he will have to decide whether or not to replant trees that were lost in the fire. Given the difficult terrain and the fact that some vegetation will regenerate on its own, the extent to which replanting will occur remains to be seen. Wendt said the recovery will be slow, and folks wanting to use the Spence Mountain Trailhead will have to be patient as volunteer crews work to rehabilitate the trail network.

“This is private property that this trail network is built on, so it’s not managed by a government agency that’s got a whole division of people who can do this quickly,” Wendt said.

ODF’s investigation into the cause of the Spence Fire is ongoing, but Case said they’ve narrowed down that it was human-caused due to the lack of lightning in the area that afternoon and the fire’s close proximity to the trail system. Wendt said it’s likely that someone using the trails sparked the fire.

“Having some of the trails closed educates people that the fire danger this time of year is extreme and it’s real,” he said. “People need to be careful about what they’re doing out on the trails.”

Everyone involved in the fire response praised the teamwork displayed when combatting the Spence Fire. Case said the Oregon Department of Forestry assembled a team with personnel and equipment from the U.S. Forest Service, Bureau of Land Management, Klamath County Sheriff’s Department, Klamath County Fire District 1, Klamath Emergency Services, Oregon State Police and Oregon Department of Transportation, along with other contracted individuals. Wendt said their work was instrumental in ensuring that the blaze didn’t destroy more of JWTR’s property.

“It’s a tough situation,” Honzel said. “But we’re pretty thankful for the response.”