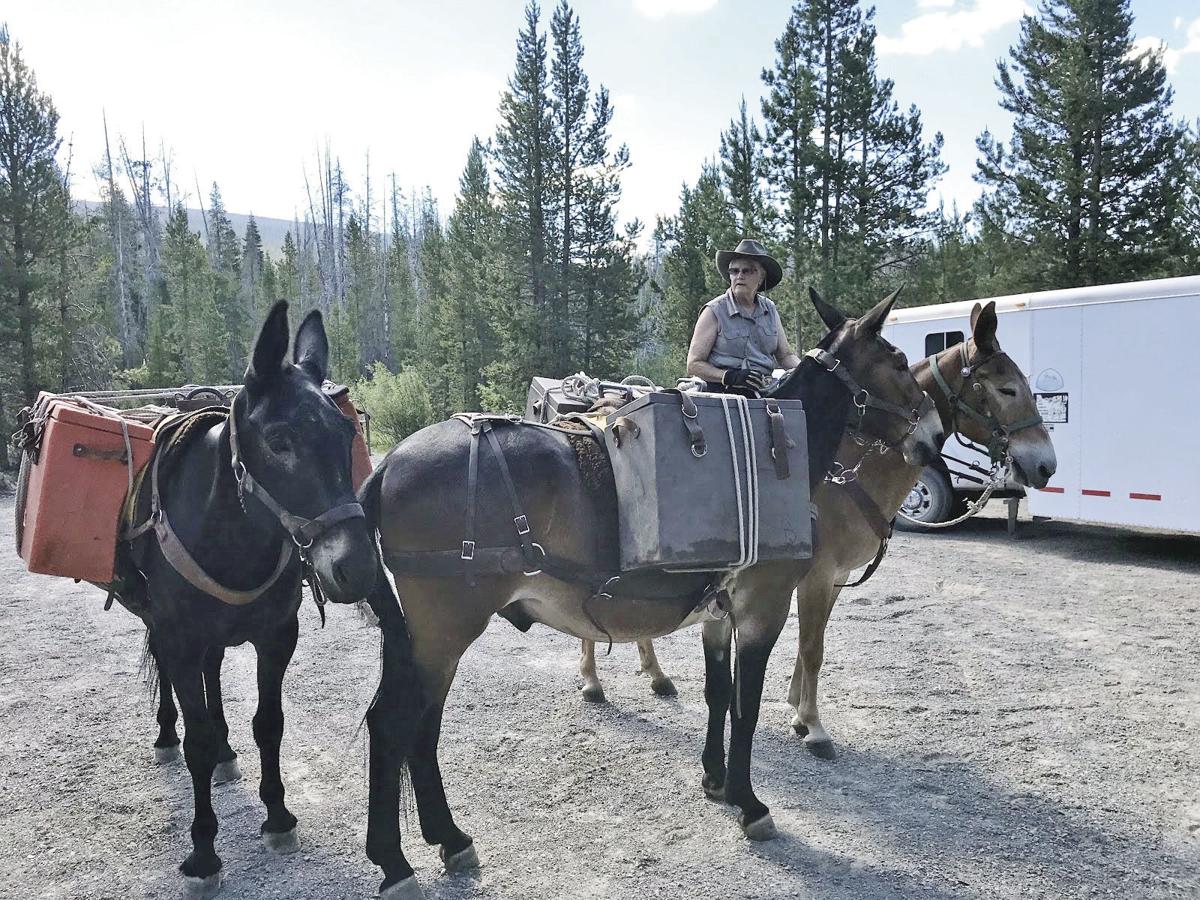 Betty Applebaker and her mules ready for the trail. There are 30 years of fish packing under Betty’s belt. 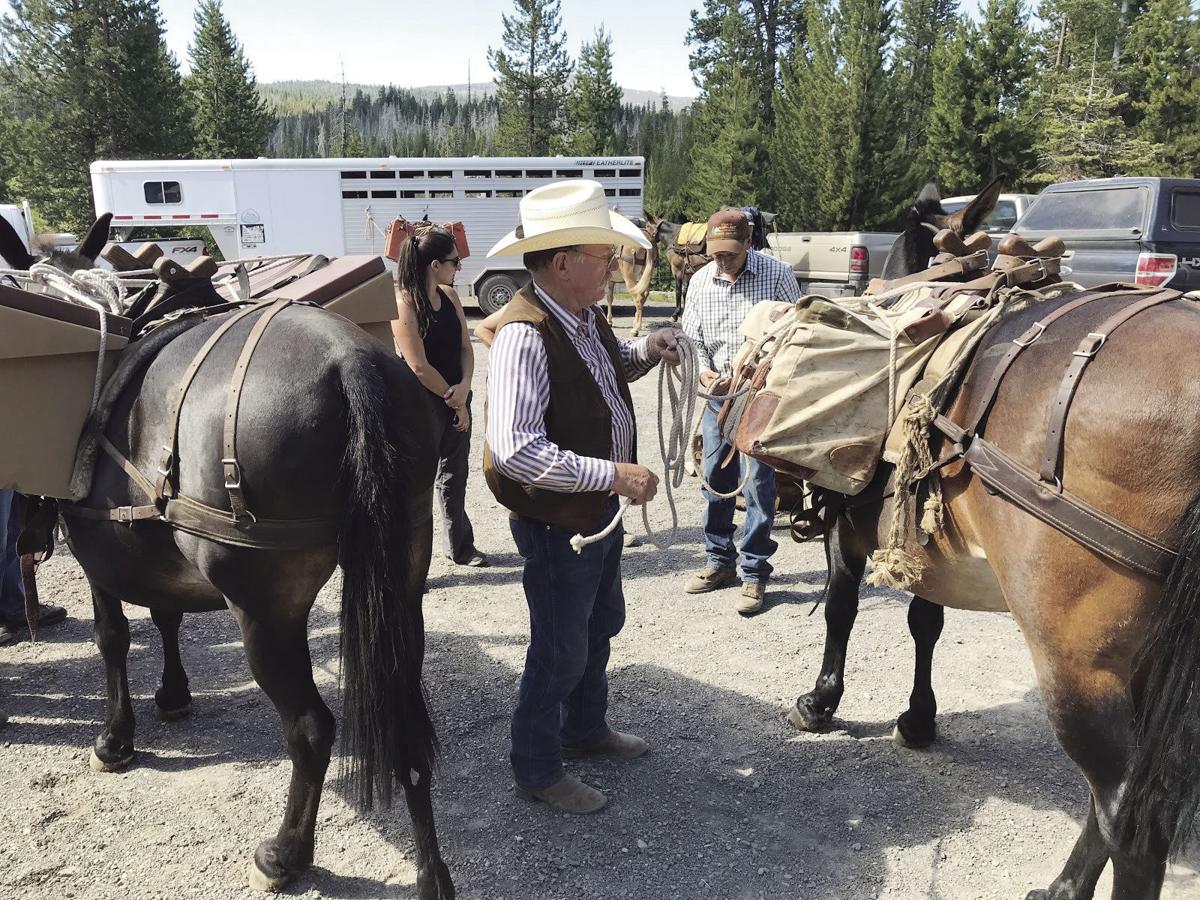 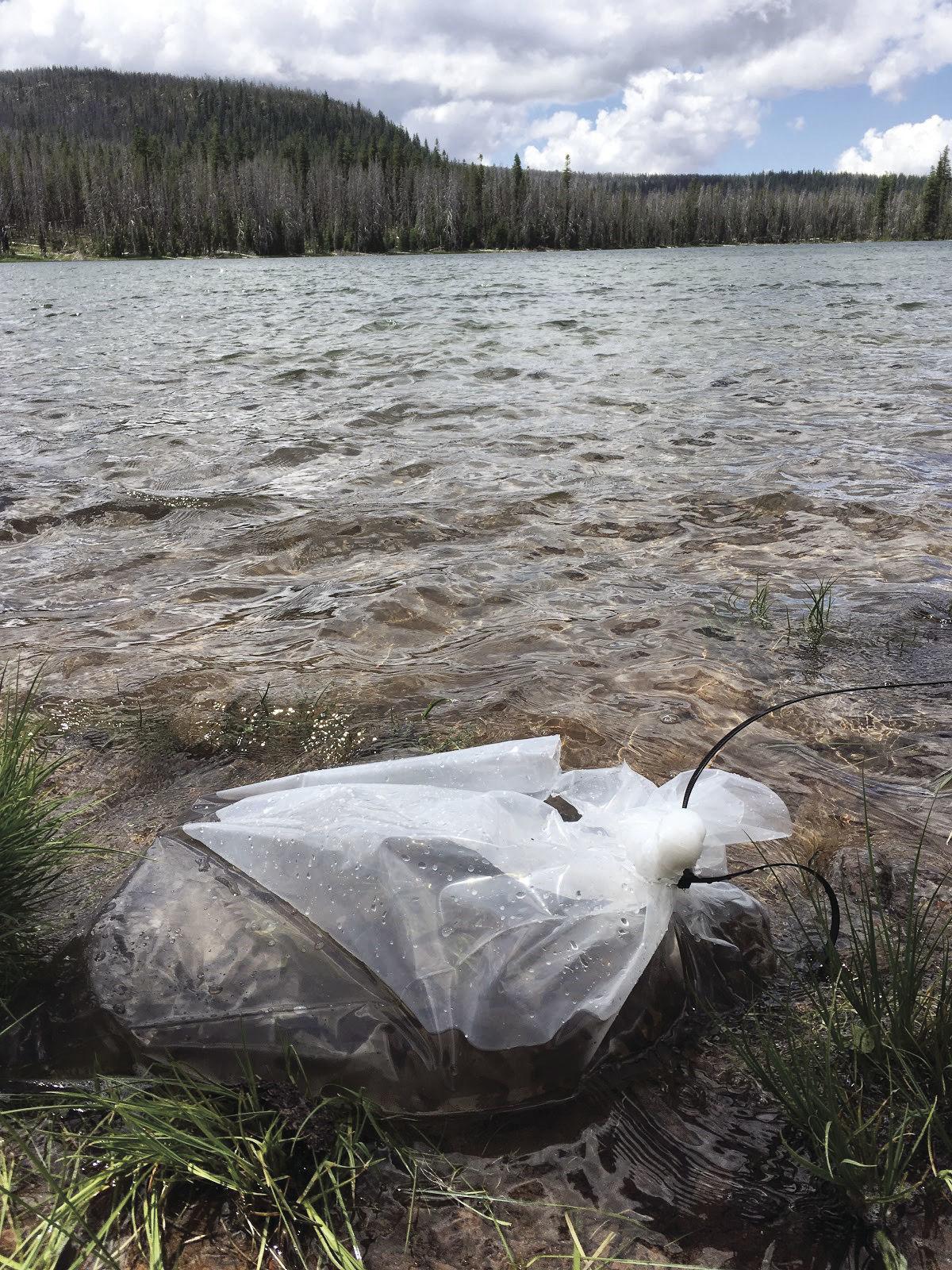 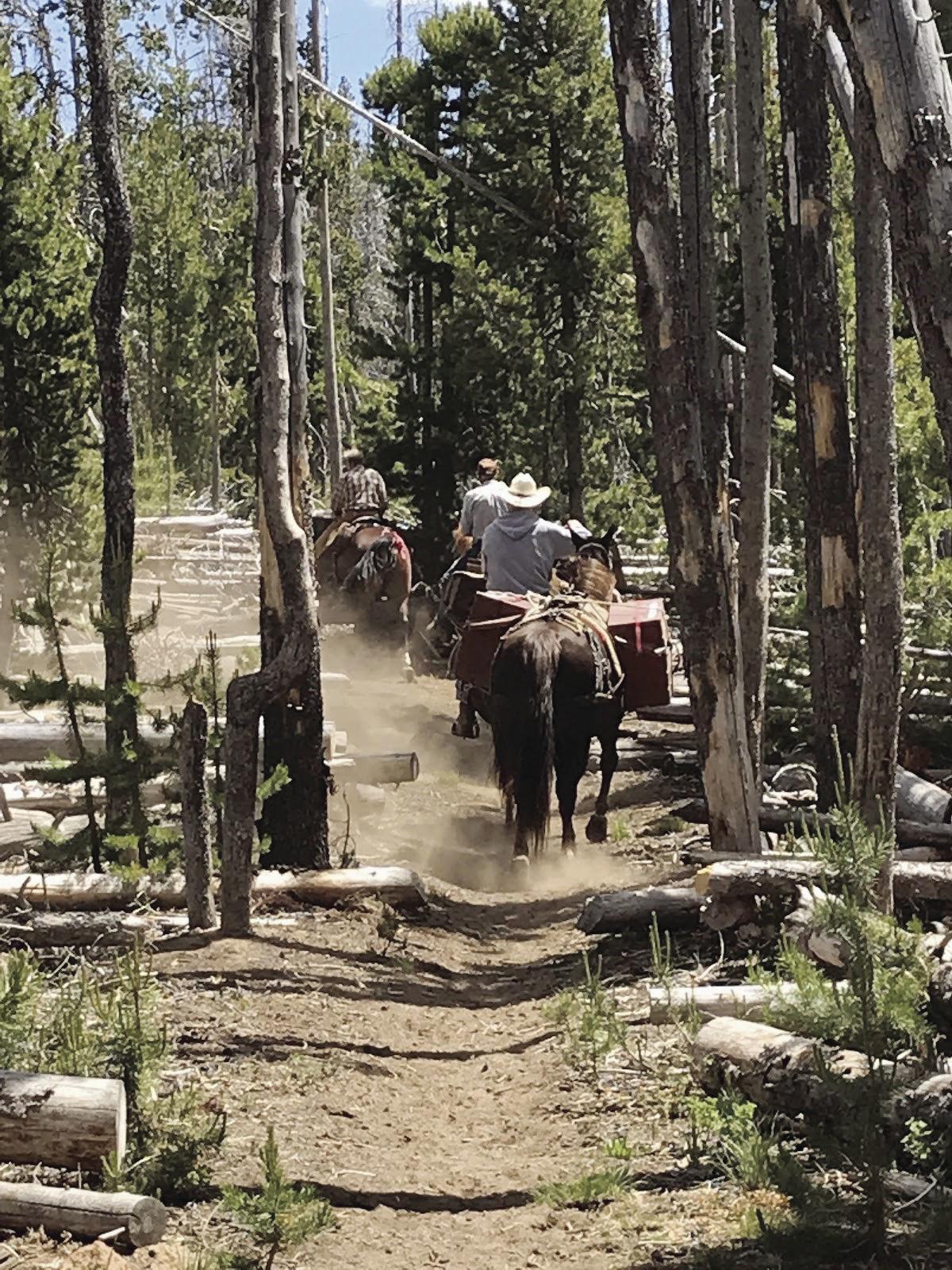 A pack string of mules and horses followed the trail to Blue Lake in the Gearhart Wilderness northeast of Bly. 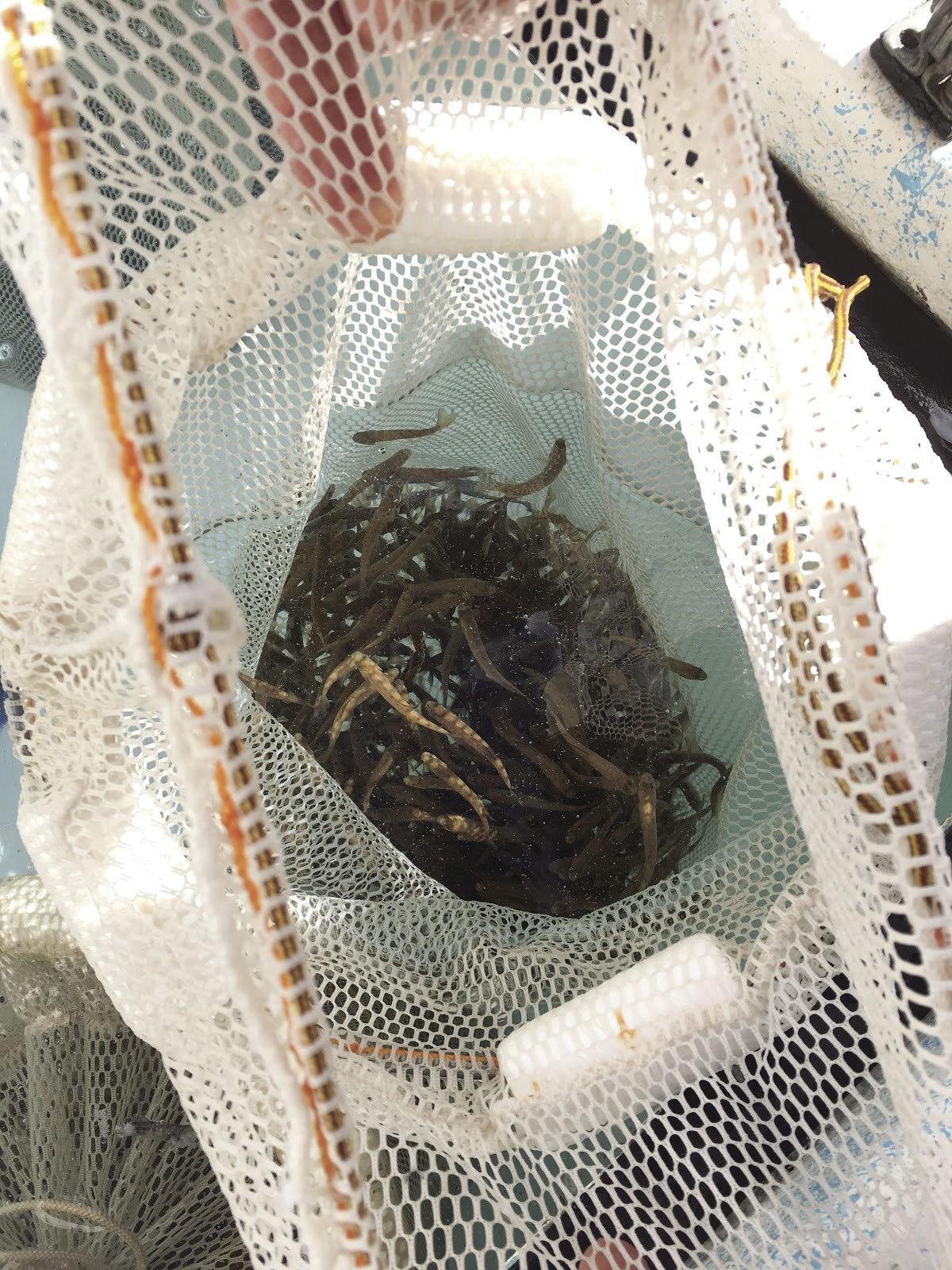 Fingerlings are ready for transfer to mule packs. 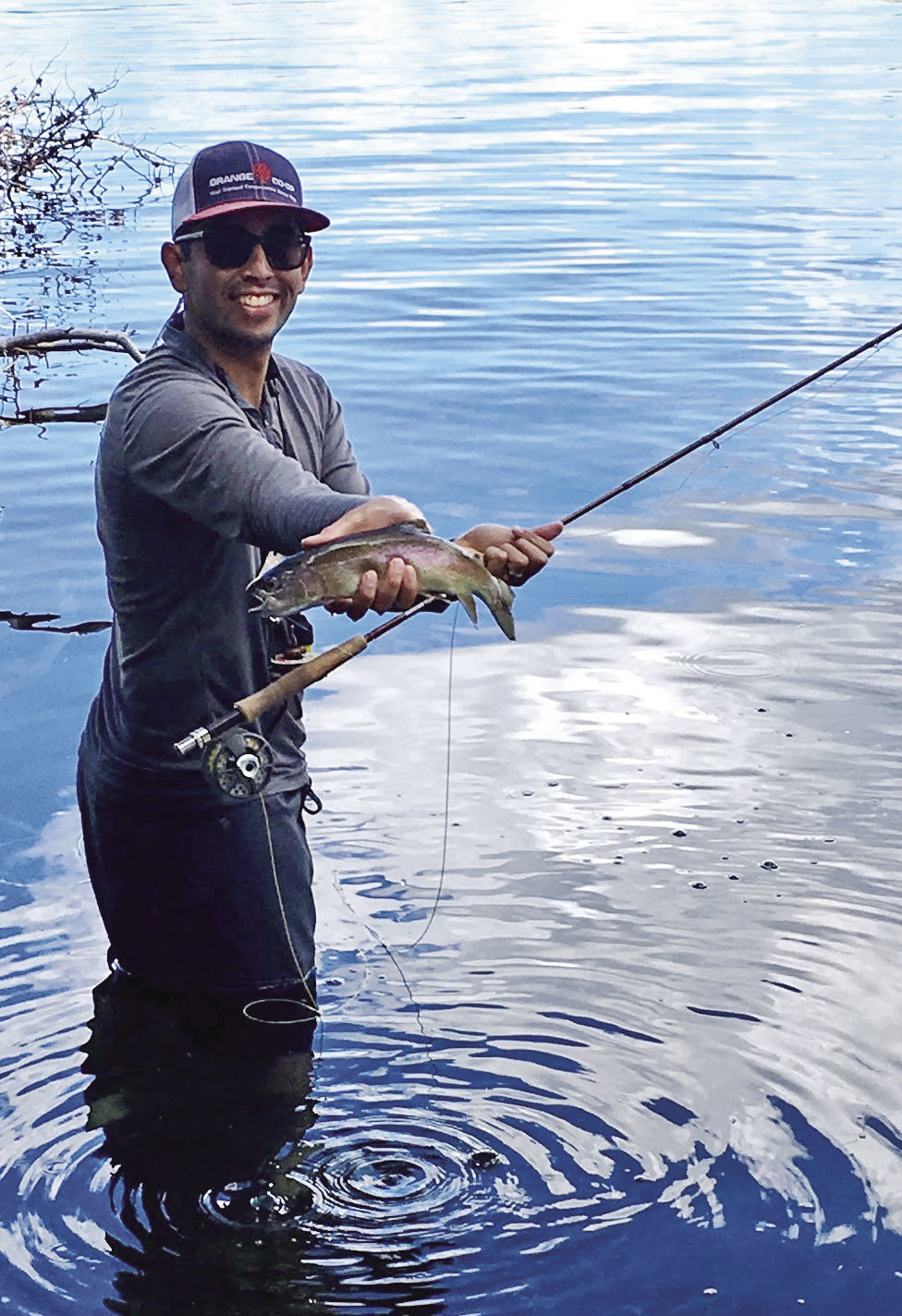 A first cast into Blue Lake yields a good return for Eduardo Contreras.

Subscribe Today! Please read: Readers of local content on the Herald and News website – heraldandnews.com – will require a subscription beginning today. For the first few months, non-subscribers will still be able to view 10 articles for free. If you are not already a subscriber, now is a great time to join for as little as $10/month!
1 of 6

Betty Applebaker and her mules ready for the trail. There are 30 years of fish packing under Betty’s belt.

A pack string of mules and horses followed the trail to Blue Lake in the Gearhart Wilderness northeast of Bly.

Fingerlings are ready for transfer to mule packs.

A first cast into Blue Lake yields a good return for Eduardo Contreras.

GEARHART WILDERNESS — One Saturday morning in late July, several trucks, horse trailers, two Oregon Department of Fish and Wildlife (ODFW) field trucks, and a handful of passenger vehicles convened at the Blue Lake trailhead that leads into the Gearhart Wilderness.

As new members of the High Desert Trail Riders, my wife and I followed the trailers up the dusty mountain roads, north of Bly, to partake and witness an annual tradition that provides recreational opportunities for anglers seeking an Oregon backcountry experience.

For the last three decades, volunteers with the trail riders chapter of Back Country Horsemen of America have assisted ODFW in packing in rainbow trout fingerlings to Blue Lake. Stocking trout in high country lakes, many which were originally devoid of fish, has been a long-standing practice for state wildlife management and continues annually in remote Oregon waters.

The rainbow trout that are stocked in Blue Lake are triploid. This deliberate mutation prevents reproduction and limits unintended impacts if they make it out of the lake.

However, this means that the fishery is reliant on an annual replenishing of fish. One year, when an ODFW helicopter could not make the flight to Blue Lake and drop the young fish, staff reached out to trail rider members to assist with the stocking. Since then, the packing of rainbow trout into Blue Lake on mules has been an activity that the group looks forward to each year.

Ben Ramirez, district fish biologist for the Klamath watershed, said he had heard about the packing of trout into Blue Lake long before he ever moved to the area.

A dad and his young son arrived just in time to watch the event, with loaded backpacks and fishing rods in tow to hike in and catch adult fish from previous years’ stockings.

The 3,000 Crane-bow fingerlings, with genetic origin from Crane Prairie Reservoir, were moved into plastic bags, which were filled with sufficient water, oxygenated with a tank and placed into hard-sided panniers or coolers in canvas bags with ice to maintain a temperature of 45 to 55 degrees.

We helped lift the loads on to the pack saddles and lashed them down with a box hitch. Trail rider members Betty Applebaker, Ron Stewart, Dick Strohkirch, Ken Gudgeon and Ron Mortinson (of the Sourdough BHA chapter) climbed aboard their mounts to take the cargo up to the lake. ODFW staff, Justin Miles, Ben Ramirez and an intern followed behind the pack train on the wooded 3-mile trail into Blue Lake.

Once at the lake, the biologists placed the bags of fish on the edge of the bank, to allow them to adjust to the water temperature. Miles closely monitored the bags until they reached a temperature adequately close to the lukewarm 62 degrees of Blue Lake.

With the bags now cut open, the fingerlings flowed into the lake, but the bulk of the fish stayed close to shore, pushed outward by the lake’s waves. We watched as the fingerlings slowly dispersed out of sight into their new home.

After a quick lunch, the stock and riders headed back down the trail, but the team of biologists and my wife and I stayed to see how fish from previous years’ stockings had fared.

As we walked along the edge of the lake in the direction of the wind, we came to a bay that was protected from the steady breeze. Soon, I was distracted by the slurping and splashing of fish cruising the edge of the still water, some only a few feet from the bank where I stood.

I quickly strung my fly rod and tied on a generic dry fly imitation. As soon as the fly was secured I crept toward the cruising fish that I could now see plainly in the lake’s clear water.

I cast to the closest fish and he moved without hesitation, taking the fly on this initial cast. The flashy 15-inch trout with red sides and well-defined dark spots pulled at my rod but came to hand after a thrilling fight.

I returned the fish to the lake and for the rest of the afternoon continued to watch trout leap out of the water for damsel flies that coasted the surface of the lake, and the imitation damsel fly that I had replaced on my line.

The warm lake water was too enticing and my wife, and our border collie could not resist a swim.

As we prepared for our hike out, we said hello to groups of horse packers and backpackers that had just arrived with fishing rods strapped to saddles and backpacks. I knew the trout of Blue Lake had inspired these wilderness campers, as it had just done me, to seek the tug of a hard fighting fish in the eastern Oregon mountains, made possible by the mules of the High Desert Trail Riders.