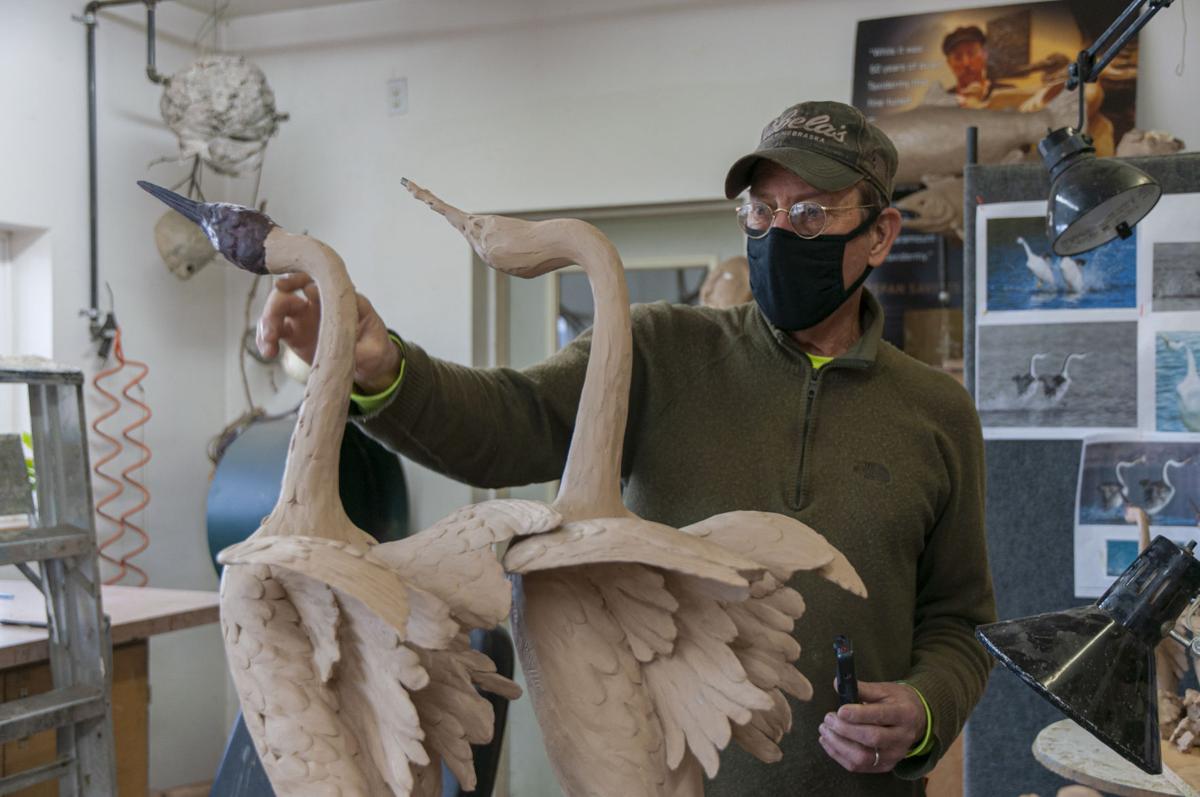 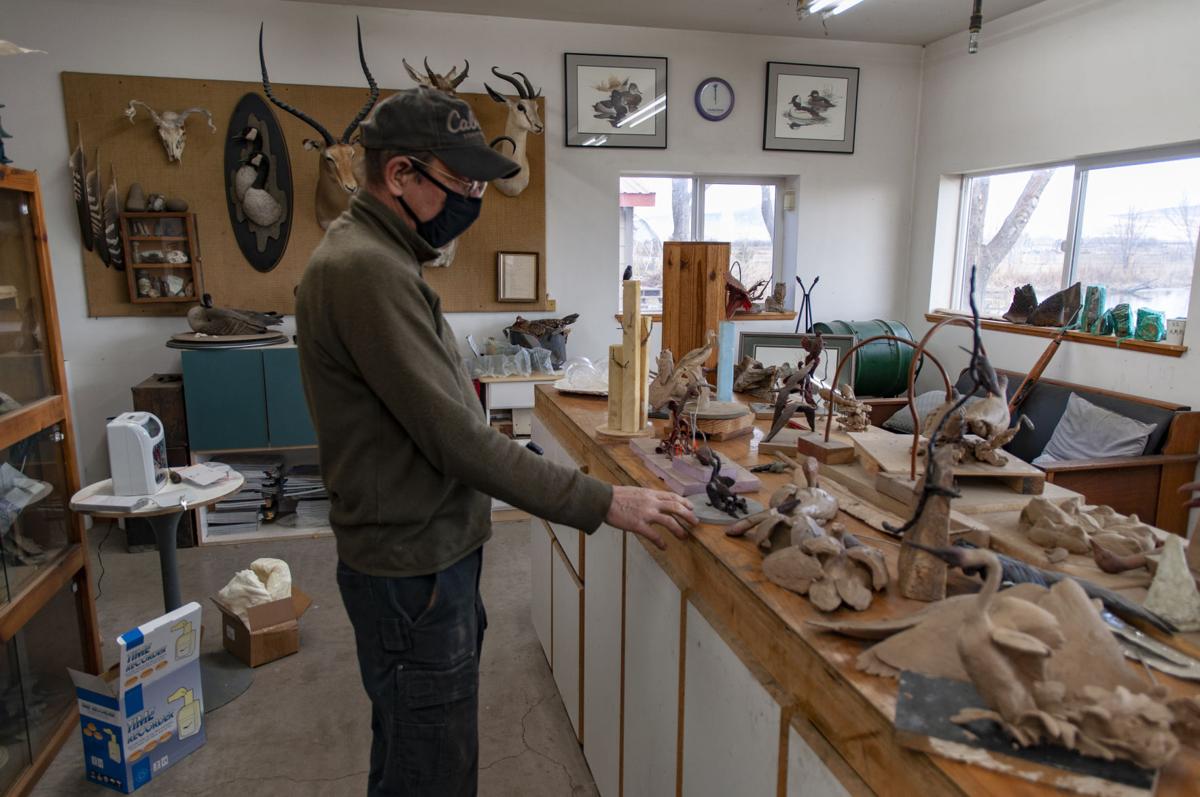 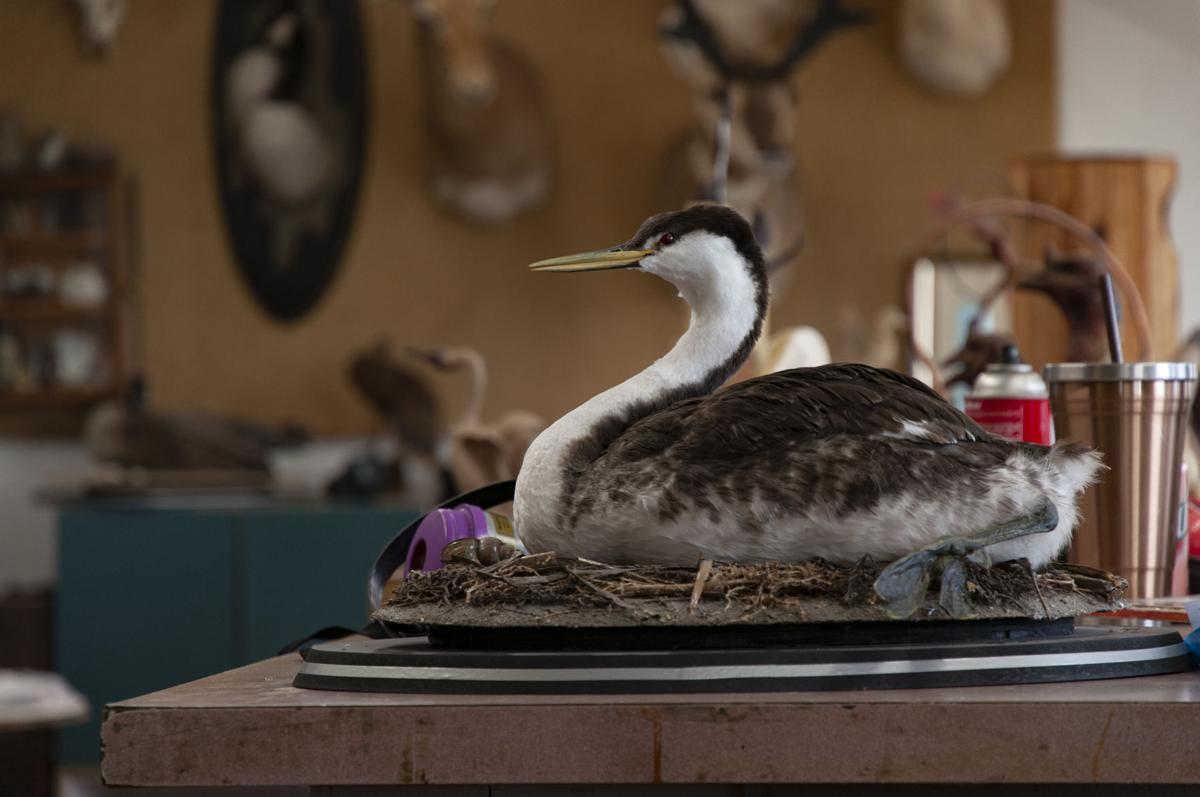 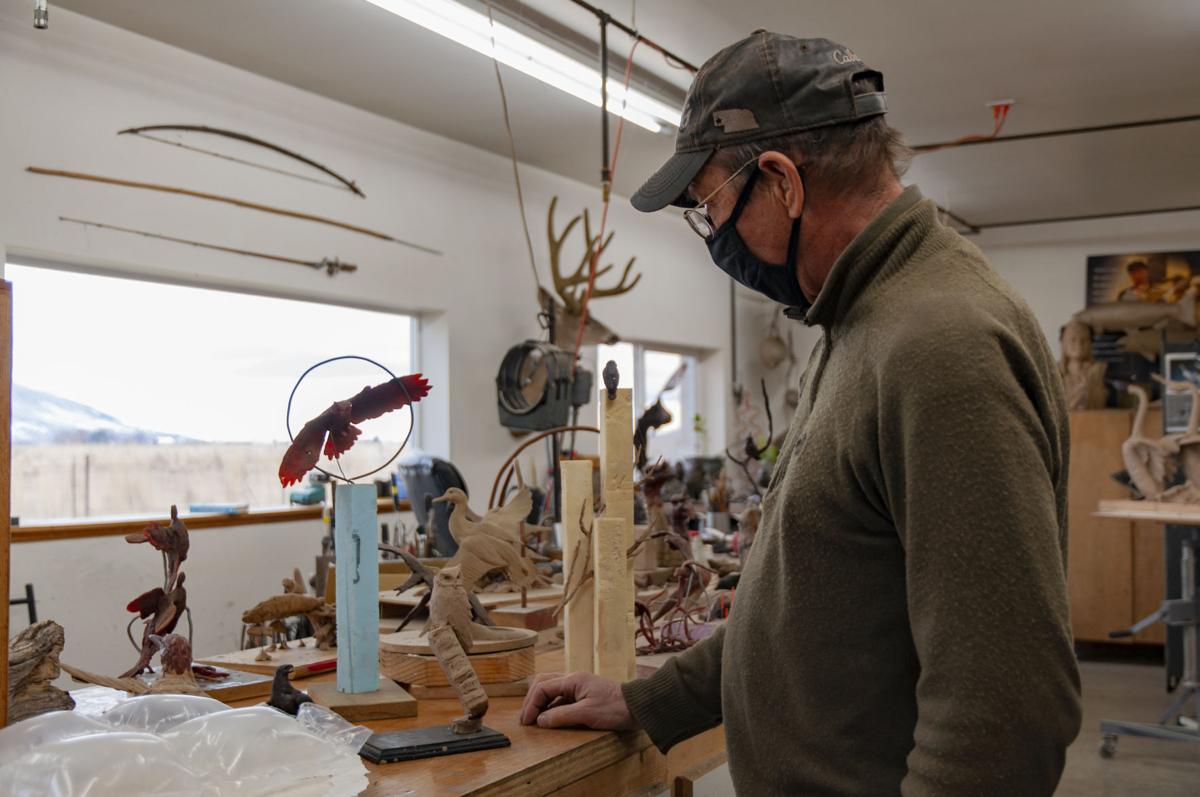 Stefan Savides remembers the first time he set eyes on the Klamath Basin. At around 10 years old, he was accompanying his brother on a trip through Oregon from their home in the Bay Area. Driving north from the California border toward Klamath Falls, he noticed the canals on either side of Highway 97 brimming with birds.

“I was glued to the window,” Savides said.

Several years after that, Savides took a hunting trip to Tulelake with his friends and fell in love with the high desert and its wildlife.

“The waterfowl in 1966 here was un-freakin-real,” he said. “The birds blackened the sky when they took off.”

It’s not surprising that Savides fixated on the Basin’s winged residents—to say he’s always had an affinity for birds would be an understatement.

“I came into this world with an insane fascination with birds, and I never strayed from that fascination,” Savides, 70, said as he sat in his studio surrounded by taxidermy ducks and bronze owls. Outside a large window behind him, hundreds of waterfowl bathed in his backyard pond under the gray winter sky.

Savides attributes his avian enthusiasm to nature more than nurture—he said he was wired to love birds. One of his first memories as a toddler is “feeding” pebbles to the chickens in his neighbor’s yard. His mother, catching onto his fascination, directed him away from Boy Scouts to start a junior Audubon Society in his neighborhood.

Hating to see a dead bird go to waste, Savides began learning the basics of avian taxidermy and was able to mount birds by age 12. Four years later, he was teaching the practice to adults, and at 18 he began spending hunting seasons at a taxidermy shop he had opened in Tulelake. For more than half a century he stuffed and groomed birds, eventually earning international acclaim. He got so good at taxidermy that he traveled around the world judging it and giving seminars on it.

Savides made a permanent move to the Basin in 1981, when he built a home outside of Dorris. He eventually settled in Klamath Falls, continuing to give dead birds new life in his taxidermy shop.

“The reason that I’m sitting here in the middle of the Klamath Basin is because of birds,” Savides said.

But the accomplished taxidermist soon felt it was time for a career shift. The reliance on organic material meant that taxidermy wasn’t a lasting art form—at least not without painstaking preservation efforts. Having dabbled in art his whole life, from woodcarving to painting, Savides settled on bronze sculpture. It was a medium forged in antiquity, guaranteed to last for 5,000 years.

“If you want to leave your mark on the world—boy, you don’t get much better than that,” he said.

Pivoting to a new art form just 15 years ago, Savides knew he wouldn’t have the same time to hone this craft as he had with taxidermy. So he fast-tracked, attacking bronze sculpture’s learning curve head-on. Knowing the ins and outs of bird anatomy from his experience as a taxidermist was a big help, and he soon became an award-winning wildlife sculptor.

“Already having created one successful career in art, I knew that the parameters were the same,” Savides said.

Savides’s sculptures, like their subjects, are graceful with a touch of whimsy. The bronze’s patina adds a layer of rugged timelessness, as if they’re real specimens plucked from the wild and frozen in place for eternity. With each piece, Savides hopes to depict birds as the public wouldn’t normally see them.

“What I always look to in my work is to give the viewer an intimate and up-close introduction to the private lives of these animals,” he said. “You’re creating the attitude of the bird. You’re creating flow and motion and repeating textures.”

Having made a name for himself as Klamath Falls’s resident bird man-turned-sculptor, Savides has contributed a number of works to private homes, businesses and public places around the city. He’s installed a pair of eagles on Lakeshore Drive, a life-size pelican in Veteran’s Park, a 30-foot-tall mobile in the atrium of Sky Lakes Medical Center and most recently a depiction of a Klamath tribal elder plucking a feather from an eagle in front of the Favell Museum.

The sculptor’s forthcoming work is one of his most ambitious yet. Set to unveil this summer at Putnam’s Point, it will depict two Western grebes engaged in their iconic courtship dance. The southern reach of Upper Klamath Lake is one of the best places in the world to view the birds “rushing” in the wild and has been a subject for multiple documentary film crews over the years.

The sculpture is a years-long partnership between several community organizations come to fruition and is part of a beautification effort by the City of Klamath Falls. The Wendt Family Foundation is working with the Klamath Basin Audubon Society to raise funds for the statue, and the city is sprucing up the park at Putnam’s Point to make way for it.

“It’s kind of a double whammy that’s all positive for Klamath,” said Bob Kingzett, executive director of the Wendt Family Foundation. Having worked with Savides on the Favell Museum sculpture, which the Wendt family financed, Kingzett proposed the idea of commissioning a new public art piece from the avian sculptor every year.

“When you have someone of this caliber,” Kingzett said, “why aren’t we trying to do a public piece of art every year to honor his work?”

Kingzett said public art will help residents and visitors alike appreciate the Klamath Basin's unique spot on the Pacific Flyway and its resulting wealth of avian species. He added that the statues will help beautify the city’s downtown area, attracting people to local businesses and boosting economic development. Savides agrees.

“The cities that have public art are usually the ones that are thriving,” Savides said. “They’re the cool cities that you want to go to. Public art just makes that statement.”

To realize the Putnam’s Point project, Kingzett partnered with Karl Wenner, a local retired surgeon and member of multiple conservation groups in the Klamath Basin, including KBAS, who has known Savides for years. Wenner and other KBAS members had looked into commissioning a grebe statue from the artist several years ago, but the timing was never right until Kingzett stepped in.

The Wendt Family Foundation will match up to $25,000 raised by KBAS, and the city has provided another $25,000. So far, Kingzett said the project is about 85% funded and is still seeking smaller donations from local residents.

Wenner said the project has been a bright spot in a year of so much negativity, from the pandemic causing KBAS to cancel its annual Winter Wings Festival to a botulism outbreak of historic proportions devastating the Klamath Basin National Wildlife Refuges.

“This was just this really positive experience that good things can happen and people can work together,” Wenner said. “It’s celebrating what makes Klamath Falls so special.”

In early January, the clay model of the grebes, running in tandem with waves splashing behind them, sat in Savides’ studio. It will be scaled up to about 5 feet in height through a process new to Savides, which will scan the model and 3D print it at roughly three times its size. After returning to the artist in separated panels, the enlarged model will be reassembled and covered with new clay. Savides will detail those panels and send each of them to a foundry, which will mold and cast them in wax, then in bronze. Once the metal panels return to Savides’s studio, he’ll weld them together and add the final patina.

Though anxious about the new process, Savides said he’s excited to see it through. He hopes to have the scaled down model completed and ready for scanning by the beginning of February.

The sculpture isn’t the only thing new to Putnam’s Point—after being presented with the plan to install the grebes, the city council saw it as the perfect opportunity to execute a long-awaited plan to improve the park. John Bellon, parks community relations manager and urban forester for the city, said he did a landscape drawing for Putnam’s Point back in the late 1990s, hoping to add landscaping, benches and interpretive panels to carve out better viewing spaces for the birds gathering at the southern end of Upper Klamath Lake. He saw it as an “oasis” for residents to interact with wildlife.

“Putnam’s Point is a fantastic asset, and we should capitalize on it,” Bellon said.

Bellon said the grebe sculpture was a good excuse to upgrade the space and fulfill the city’s park beautification goals. Crews have already begun pruning trees to allow for better views of the grebe dance floor.

“The whole place is going to get resurrected,” Savides said.

While the design hasn’t yet been finalized, KBAS plans to include several informational panels that will teach parkgoers about intriguing grebe behavior. KBAS President Darrel Samuels said he hopes the space can celebrate the birds that have become so synonymous with Klamath Falls.

“Along with pelicans and bald eagles, I can’t think of a more iconic bird for this area,” Samuels said.

Everyone involved with the grebe project said it’s been a pleasure to work on, especially knowing that it’s the start of many years’ worth of public art celebrating the Klamath Basin’s unique wildlife, which all visitors and residents will get to enjoy.

“Everything about this sculpture is something good,” Wenner said. “Unless you hate grebes.”

Or donate online by clicking here or visiting klamathaudubon.org.