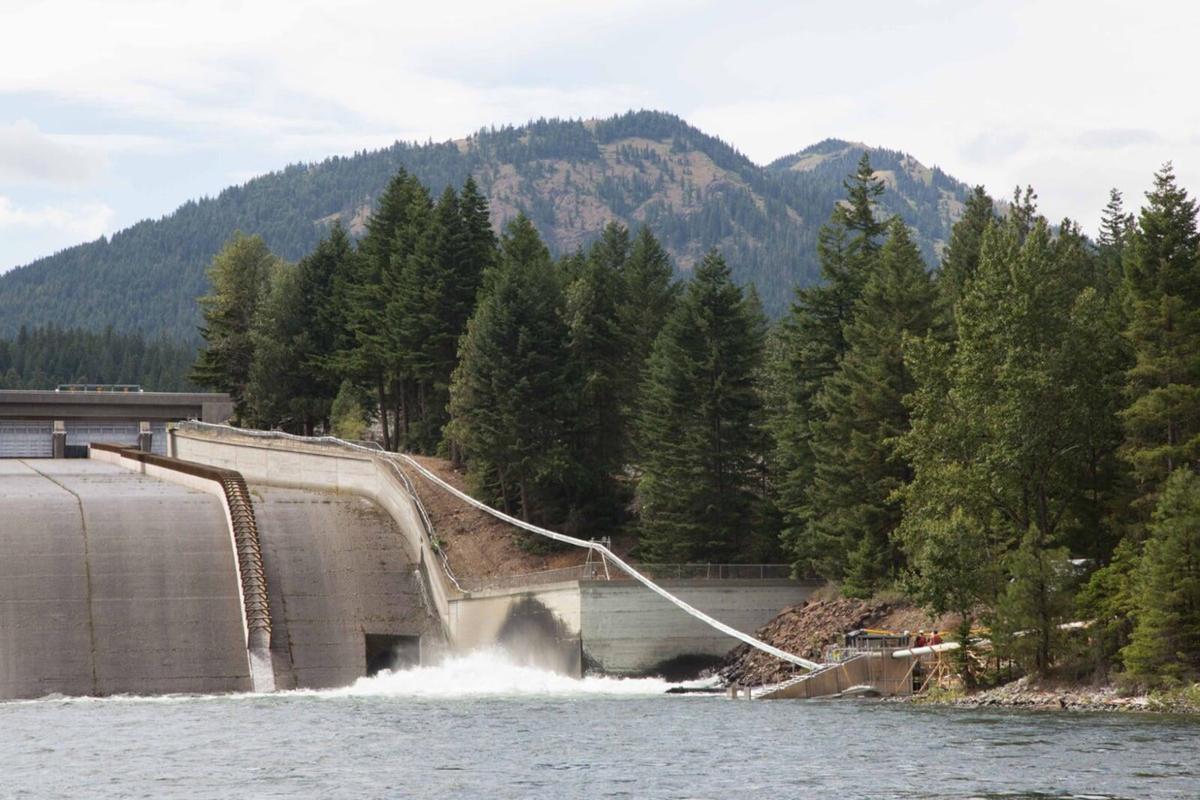 A fish transport tube — part of Whooshh Innovations fish passage technology — can be seen extending over a large dam. Fish travel through the soft, flexible tube before arriving safely on the other side of the dam. 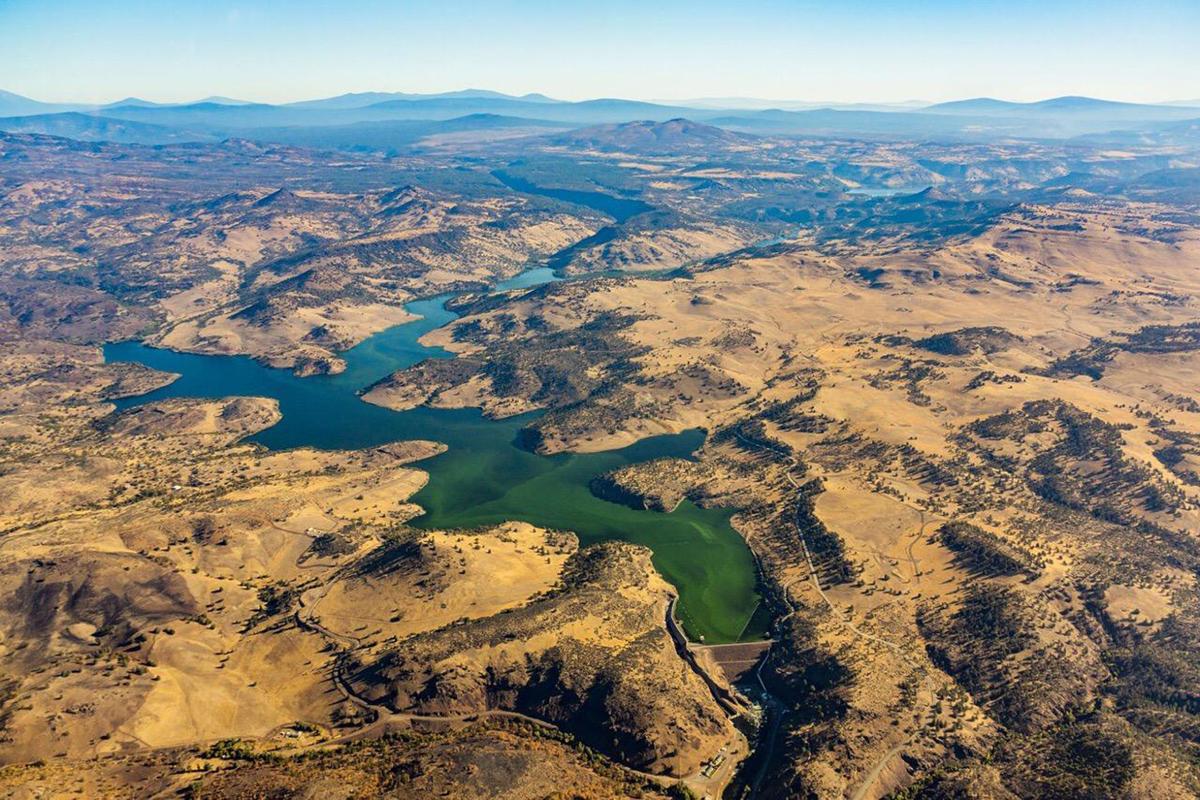 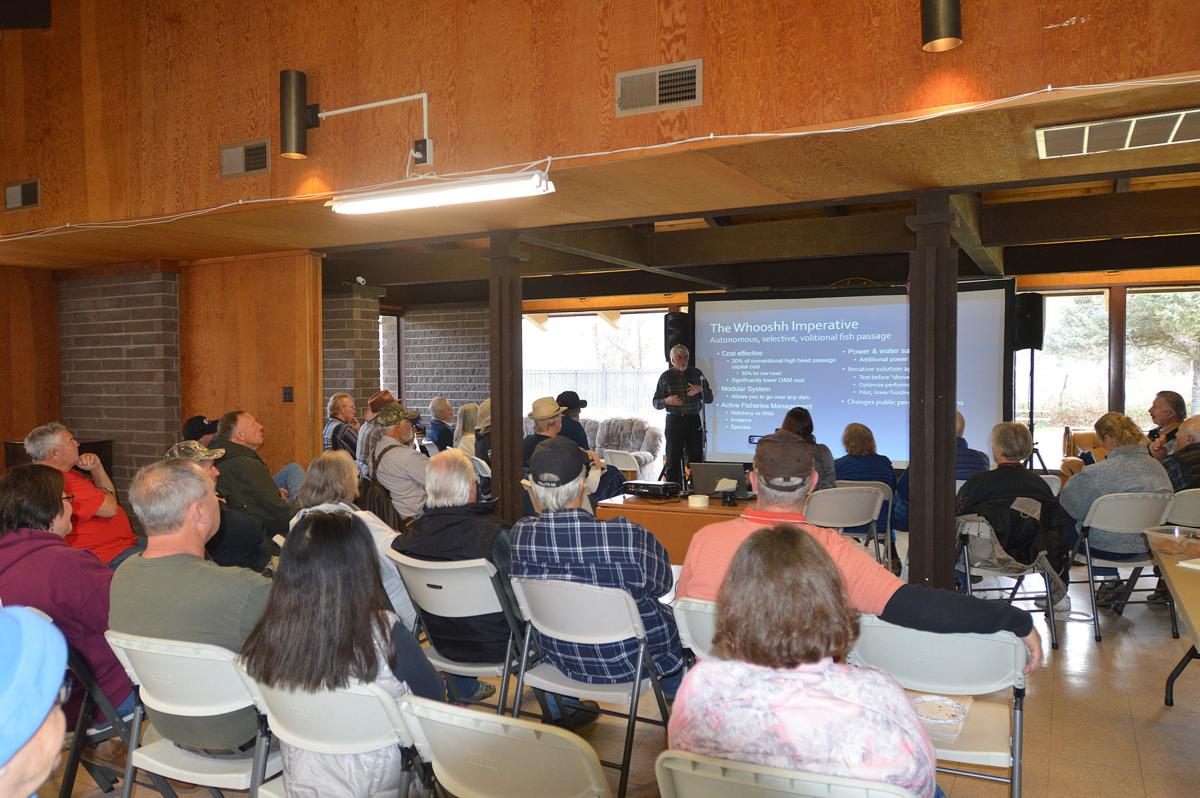 A fish transport tube — part of Whooshh Innovations fish passage technology — can be seen extending over a large dam. Fish travel through the soft, flexible tube before arriving safely on the other side of the dam.

Though the process leading to removal of the Klamath Dams continues to march forward, numerous citizens in Siskiyou County have continued fighting to keep the dams in place. Many of those dam advocates are members of the Siskiyou County Water Users Association, which in January hosted a presentation about an alternative fish passage technology the association believes could “make it possible” for the dams to remain.

But the Klamath River Renewal Corporation — the nonprofit organization responsible for decommissioning the dams — stated that a fish passage solution still fails to address other issues that led to the dam removal decision.

Steve Dearden, vice president of sales with Whooshh Innovations, a company based in Washington that invented the viral sensation “Salmon Cannon,” traveled to Hornbrook Jan. 30 to make a presentation about Whooshh’s selective fish passage system. The company has deployed the system at the Chief Joseph and Cle Elum dams in Washington and has reported success with both projects.

During the third day of the Cle Elum Dam pilot project, Dearden said, Whooshh’s selective fish passage system was shown to be “statistically equivalent” to the trap and haul method of fish transport.

Whooshh’s selective fish passage is a modular system that begins with a passage portal that directs fish to a steep pass and then into a false weir. The false weir assures the fish enter one after another while using minimal water. The fish are then sent through long transport tubes which are soft, flexible and slippery.

A computerized recognition system takes 18 high definition images of every fish from three different directions. The images are analyzed to collect data on the fish, including count, length, girth, species and fin clips to ensure autonomous sorting. The fish are sorted to determine which will move past the dam and which will be returned to where they started.

Dearden emphasized that the technology does not harm or kill any fish. It takes just seconds or minutes for a fish to be transported past a dam, versus the hours or days it takes for the fish to complete the task on its own. And Whooshh’s system costs just 10 to 30 percent of a traditional fish passage option, he reported.

Dearden confirmed during his presentation that only SCWUA had reached out to Whooshh regarding providing an alternative to removal of the Klamath dams. Multiple attendees voiced resentment toward the KRRC for not exploring whether employing Whooshh technology could mean keeping the dams in place.

But KRRC Community Liaison Dave Meurer said Monday it isn’t that simple. California’s legislature and governor have entered into the Klamath Hydroelectric Settlement Agreement with PacifiCorp — the company that owns the dams — to have the dams removed and the Klamath River returned “to its natural state,” Meurer said. The KHSA includes dam removal but does not include alternatives, he said.

In total, 23 parties have entered into the dam removal agreement, including the State of Oregon and numerous conservation, fishing and tribal entities, Meurer noted.

He added, “Just changing how fish get up the river, in an artificial way, doesn’t address the really severe water quality problems that are behind the dams.” He referred to the seasonal blooms of “toxic blue-green algae” which result from the sun heating the nutrient-rich water behind the dams.

The North Coast Regional Water Quality Control Board has posted public health advisory notices about the algae, stating that “some are capable of releasing toxins that are potentially harmful to human health.”

The California legislature has appropriated up to $250 million to carry out dam removal, which it believes will lead to a free-flowing Klamath River and improved water quality. The states of California and Oregon do not want artificial fish passage on the river, regardless of what form it takes, Meurer said.

The KRRC exists simply to implement the Klamath Hydroelectric Settlement Agreement. “We do not examine alternatives to the agreement,” Meurer stated.

More information about Whooshh Innovations and its technologies is available at www.whooshh.com.