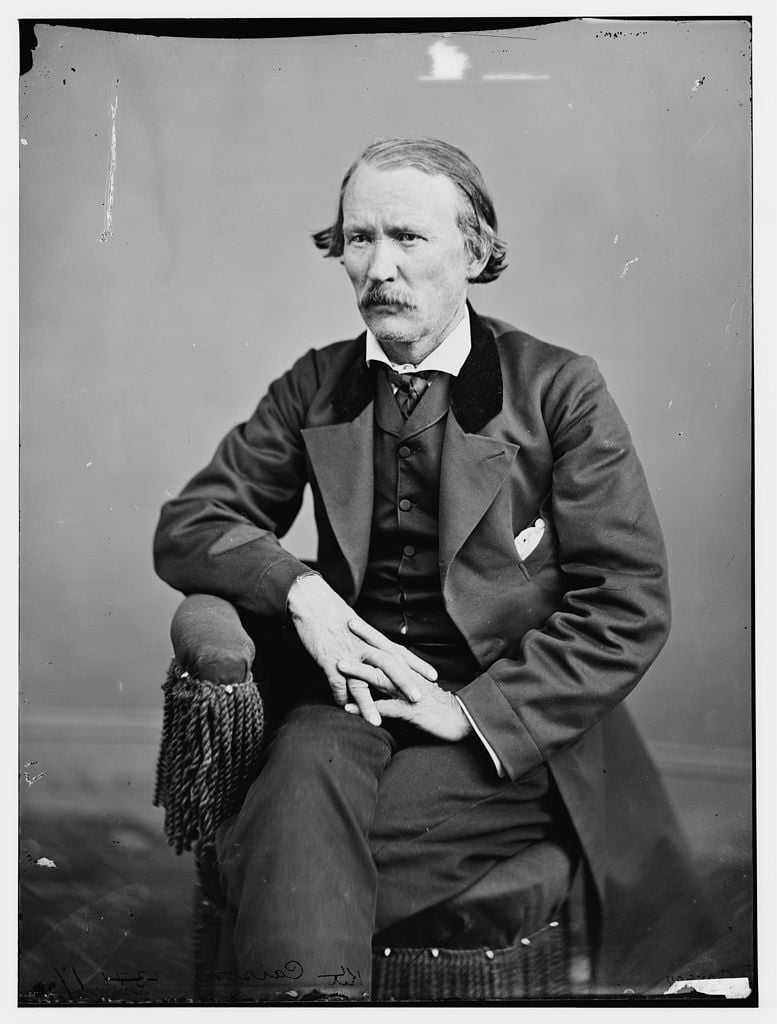 Christopher “Kit” Carson is seen in this glass negative portrait photo taken sometime between 1860 and 1875. 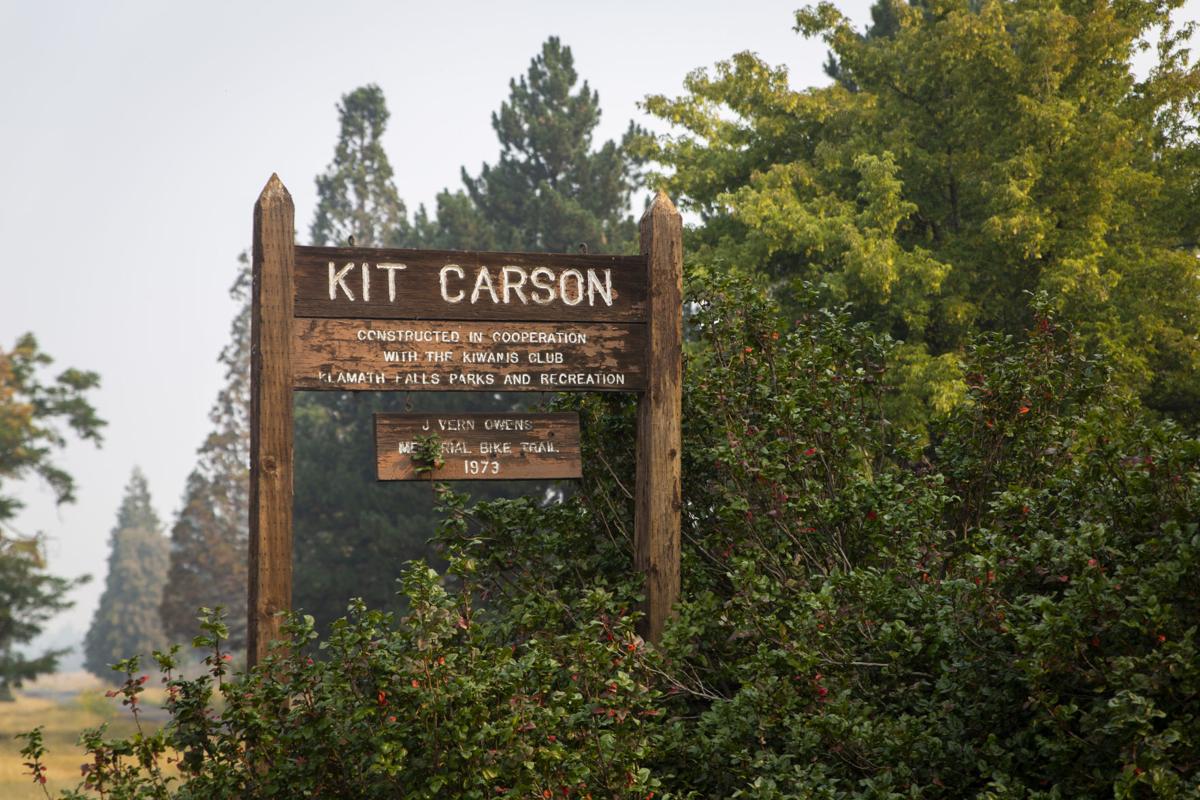 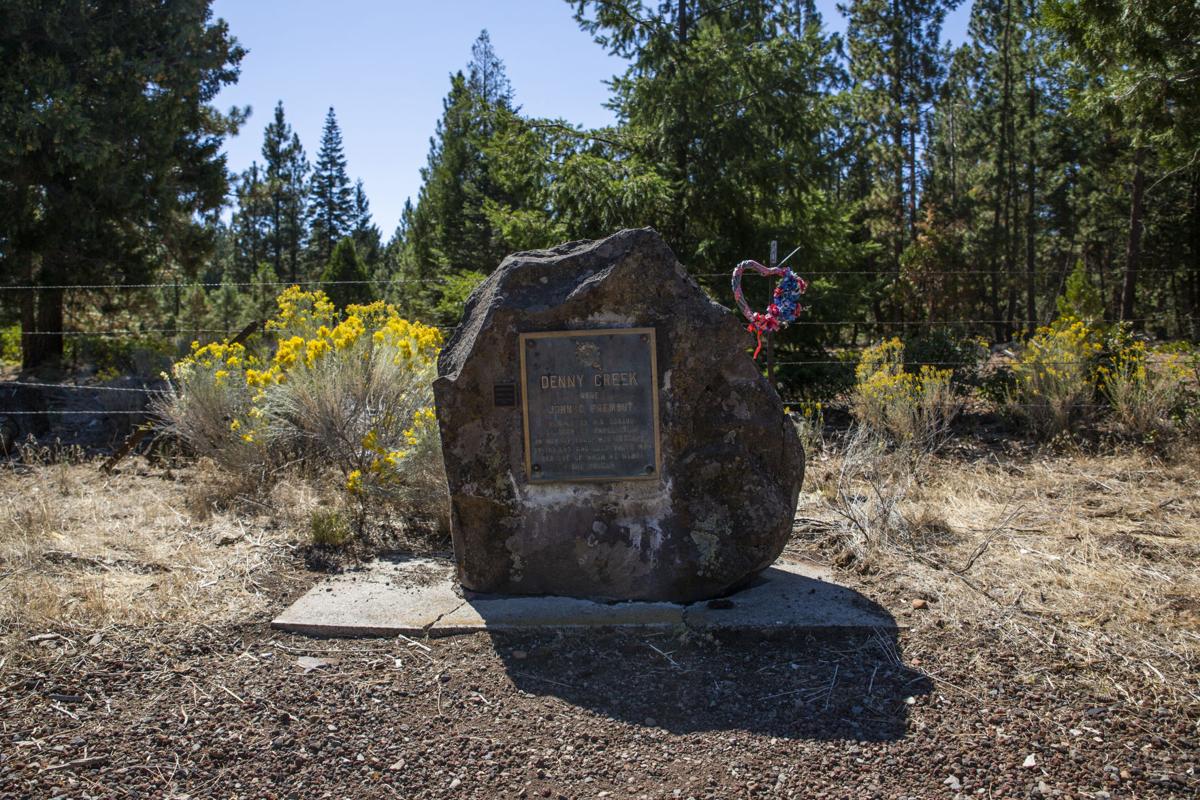 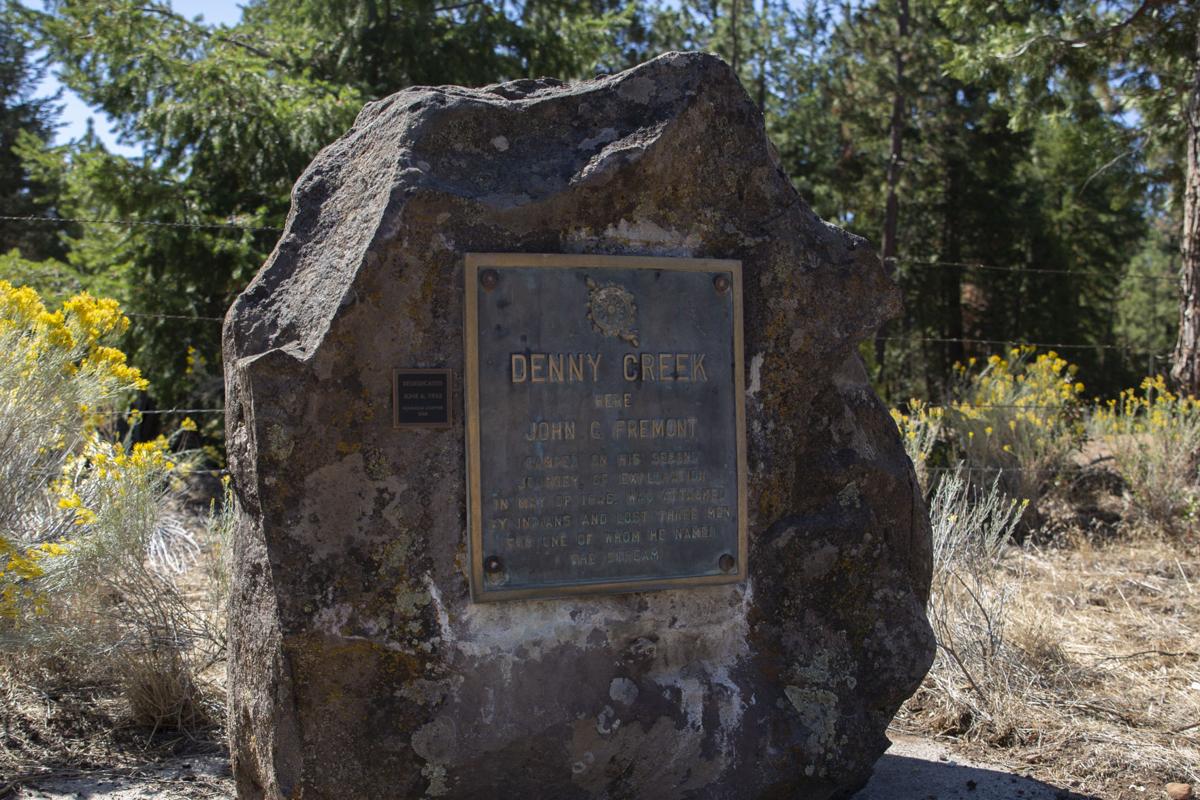 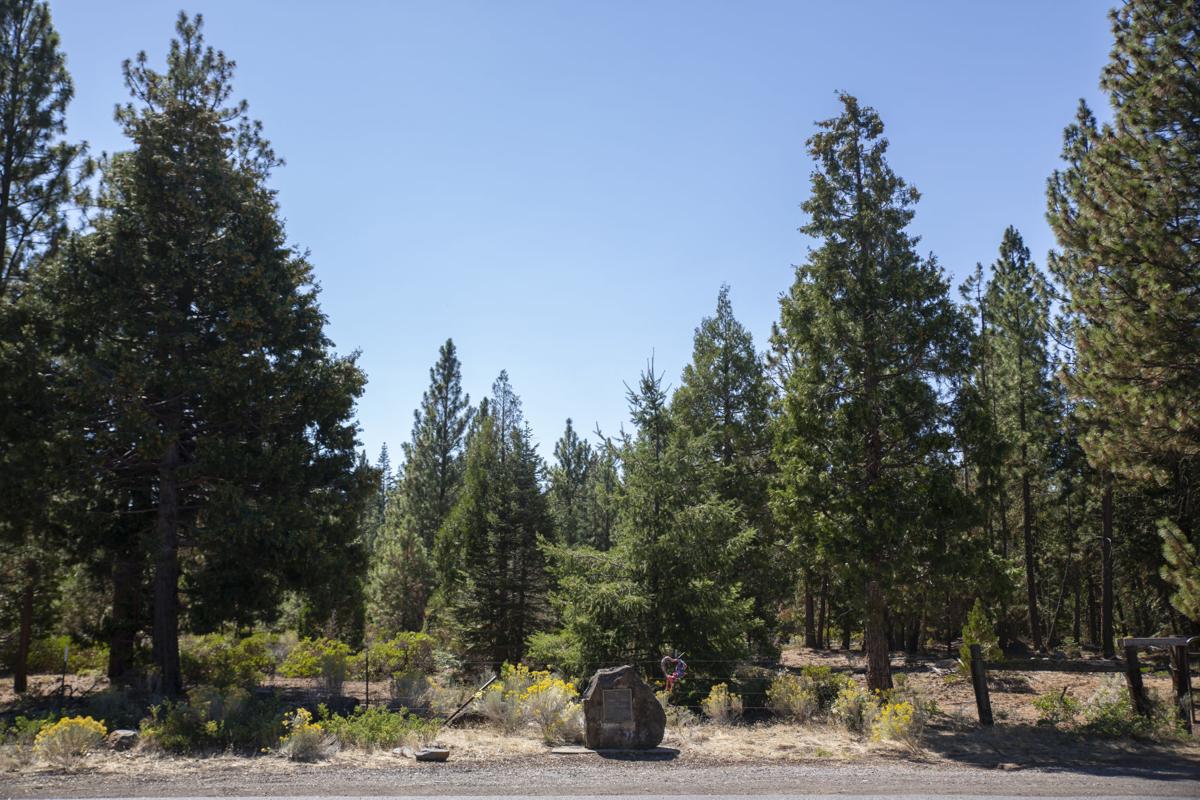 Denny Creek Memorial along 140 in Klamath Falls, on Sept. 14, 2021. In 1930, the memorial plaque was placed on the site where it is believed John Fremont's camp was attacked along the shores of Klamath Lake.

Christopher “Kit” Carson is seen in this glass negative portrait photo taken sometime between 1860 and 1875.

In August, the Klamath Falls Equity Task Force — formed to advise city council on the nature and scope of racism and inequity in the community — presented its final report and recommendations.

The city has since disbanded the task force that made the recommendations, but officials say they still plan to discuss whether or not to keep the name of Kit Carson Park, located off Crater Lake Parkway. It is one of the first landmarks people see on their way into Klamath Falls when traveling south on Highway 97.

Who was Kit Carson? Myth vs. reality

Kit Carson, the man for whom the park is named, became famous for guiding a U.S. Army officer named John Frémont on his expeditions west of the American border. Carson saw the westward expansion of the United States as an inevitable progression and wanted badly to be a part of it. He played an outsized role in that expansion, leading to both the conquest of the continent and the murder and genocide of Indigenous peoples.

Susan Johnson, a professor at the University of Nevada in Las Vegas who specializes in the history of the Intermountain West, is the author of “Writing Kit Carson: Fallen Heroes in a Changing West (2020).” Johnson argues the myth of Carson was born largely due to his connection with Frémont and Frémont’s wife — the American writer and political activist, Jessie Benton Frémont.

Benton Frémont, Johnson said, was a big fan of Carson’s. She wrote glowing stories about his exploits, which eventually caught on with the broader public. In the 1860s, dime novels were growing in popularity, and it soon became difficult to discern between the myth and the man.

”Jessie Benton Frémont just loved and idealized [Carson]... She really helped to bring him to the attention of the wider public,” Johnson said. “And then from there it just took off.”

Christopher “Kit” Carson was born in Kentucky in 1809 and raised in Missouri before moving to New Mexico. At the time, Indigenous people held a great deal of power and presence in each place, Johnson said. While his family was not wealthy, they did own enslaved Black people, and after marrying Maria Josefa Jaramillo in New Mexico, Carson owned three Navajo servants who were taken as children — which was common in the Mexican frontier lands at the time. This diverse world in which Carson lived influenced him a great deal.

”The guy was illiterate, he couldn’t even write in English, but he was fluent in Spanish and more than one Indigenous language,” Johnson said. “He was quite fluent in this very multiracial, multicultural world.”

The truth about Carson is “complex,” she said.

By the 1840s Carson was guiding government expeditions into the frontiers outside the borders of the United States. In the spring of 1846, he guided Frémont into the Klamath Basin. On his way to the Basin, and then again along the shores of Klamath Lake, the two men and their retinue killed countless Indigenous people.

After his career guiding Western expeditions, Carson served as a military officer fighting for the Union in the Civil War. He also served as an Indian agent for the federal government, and is infamous for leading a military campaign in the early 1860s against the Navajo, eventually leading to the tribe’s dispossession and banishment from its ancestral lands.

He also helped lay the groundwork for the Oregon Trail, and statues of him appear in multiple states. Carson City, Nev., is named after him — as is Fort Carson in Colorado, Carson Pass in California and Carson National Forest in New Mexico.

”In the end I think he was both a witting and unwitting agent of U.S. empire in the West,” Johnson said.

Carson died in 1868 having played a major role in America’s westward expansion, but his perceived heroism, and the mystique it forged, managed to obscure and overshadow the truth of his darker actions.

It was the spring of 1846 and the Mexican-American War had just begun.

John Frémont had embarked on his third Western expedition — his second venture into the Klamath Basin — and Kit Carson was once again his guide. Before descending into the Basin, Frémont and company stopped in the upper Sacramento River Valley in northern California, which at the time was tenuously controlled by Mexico.

While there, Carson and Frémont led a brutal massacre of the Wintu tribe, based on a rumor the Wintu were planning to attack American settlements in the area.

“It’s clear to me they (the Wintu) weren’t preparing for war,” said Jeffrey Ostler, a professor at the University of Oregon who specializes in the history of the American West, particularly American Indian history. “It was based on the flimsiest of rumors. It was ridiculous.”

Ostler said news of the Frémont massacre in California likely traveled north, reaching the ears of Klamath, Modoc and Yahooskin chiefs in the Oregon Territory.

”If that many people are suddenly killed, word is going to get out,” Ostler said. “Those were pretty closely networked groups of people.”

When Frémont, Carson and roughly 57 men stopped to make camp along the shores of Upper Klamath Lake, Frémont wrote in his memoirs that he was awoken by Carson asking one of their companions “what the matter was over there.”

“It was the sound of the axe being driven into Basil’s (one of their companions) head that had awakened Carson,” Frémont wrote.

It was soon clear the camp was being ambushed. The attackers were believed to be Klamath, and Frémont himself referred to them as “Tlamaths” in his writings. However, it is unlikely Frémont knew the attackers, and the historical record is unclear.

Todd Kepple, the director of the Klamath County Museum, said who attacked Frémont’s camp 175 years ago remains a mystery.

But there is no mystery about what happened after the attack: Carson led an assault and leveled a Klamath fishing village called Dokdokwas along the lake, killing at least 14 people. Some scholars believe the number was higher, and that it included women and children.

In the end, regardless of who actually attacked Frémont’s camp, Carson attacked a village that most likely had nothing to do with the ambush.

Don Gentry, chair of the Klamath Tribes, recalled being told of a single Modoc who snuck into Frémont’s camp and killed one of their companions, leading to the attack on the Klamath fishing village in retribution.

“The way I heard the story first, it was explained to me verbally,” Gentry said. “I thought it was an individual Modoc and in retaliation, they raided the Klamath village.”

Ostler said people like Frémont and Carson wouldn’t have bothered to figure out who exactly attacked them, an indication of how they viewed Indigenous people at the time.

“This perspective that an Indian is an Indian instead of an individual is just symbolic of what has happened here and in the nation,” Gentry said.

The massacre at Dokdokwas in 1846 left a scar on the Klamath Tribes. And the fact that one of the first things one sees on the way into Klamath Falls is Kit Carson Park — a place named after a man who massacred a Klamath village — only brings the Basin’s past traumas of colonialism and genocide to the surface.

How the park got its name, and how it could change it

In 1930, 84 years after the raid on Frémont’s camp and the subsequent massacre at Dokdokwas, the Daughters of the American Revolution donated a plaque along Highway 140 just west of town.

The plaque reads, “Here John C. Frémont camped on his second journey of exploration in May of 1846, was attacked by Indians and lost three men for one of whom he named the stream.”

The plaque is known as the Denny Creek Marker, in reference to the creek named after one of Fremont’s companions who was killed in the ambush. There is no monument commemorating the massacre of the Klamath at Dokdokwas.

In 1948 a four-lane parkway was built in town to reduce traffic, and the editor of the Herald and News suggested naming it after Kit Carson. The highway was called Kit Carson Parkway, and Kit Carson Park was named after the road that ran alongside.

The Oregon Department of Transportation renamed Kit Carson Parkway to Crater Lake Parkway in the early 2000s after a local committee submitted a proposal to change the name. But Kit Carson Park remained.

Now, decades later, the equity task force has asked the city to change the name of the park, so as not to honor a man who killed countless Indigenous people during his expeditions into what is today Klamath County.

“From my perspective, it is hard to honor somebody who perpetrated such a terrible act,” Gentry said. “Namely, honoring this individual by naming a park after them is not appropriate. It just reminds us of our tragic history. It is just a symbol of how we’ve been mistreated and marginalized over time.”

Carol Westfall, the mayor of Klamath Falls, said she wants to get the community involved in deciding if, and how, to rename a place like Kit Carson Park. She said focusing on why it should be done is imperative.

“It’s very important for the city that we have buy-in, and I think once you explain it to people, you can get a lot of people on board,” Westfall said. “Even before we started, one of the reasons we started the task force is that we saw (Kit Carson Park) needed to change. Part of our plan is to rename some of these things we now know weren’t so great for our community.”

Professor Susan Johnson said since the 1970s there have been calls to change the name of parks and monuments named for Kit Carson after people began to realize the truth about the man behind the myth.

“A lot of those naming of places for Carson took place in the late 19th century and the earlier 20th century, and that was an era that saw a rising tide of white supremacy,” Johnson said. “I don’t think anything needs to be named after Kit Carson. But I do think that the conversations about it are always clouded by this confusion of the historical person — Kit Carson — and the dime novel hero.”

Cornerback Rasul Douglas, running back A.J. Dillon and quarterback Aaron Rodgers speak to the media via Zoom after the Green Bay Packers defeated the Los Angeles Rams 36-28 on Sunday, Nov. 28, 2021, at Lambeau Field in Green Bay.

Watch now: 5 standout performances in the Packers' victory over the Rams

Watch now: 5 standout performances in the Packers' victory over the Rams

Will your holiday spending habits change this year?