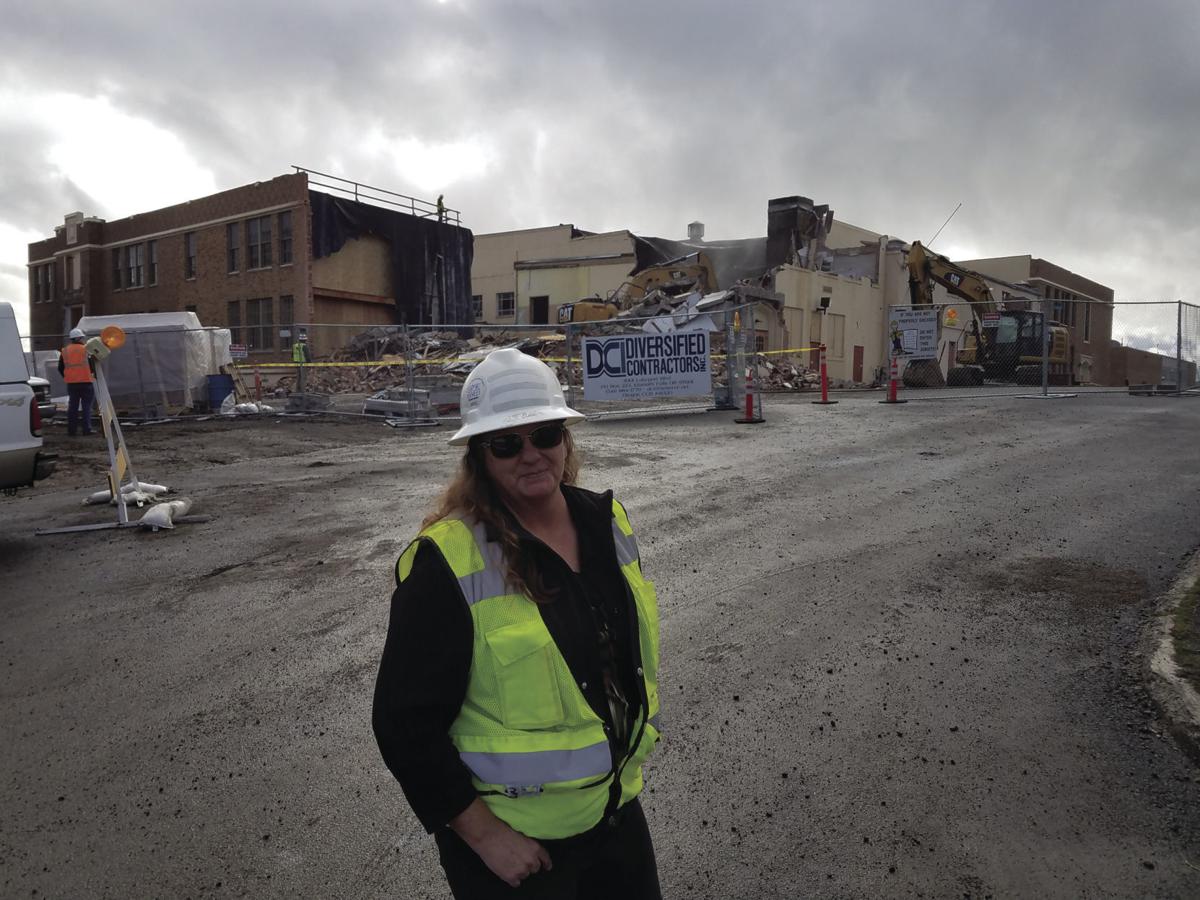 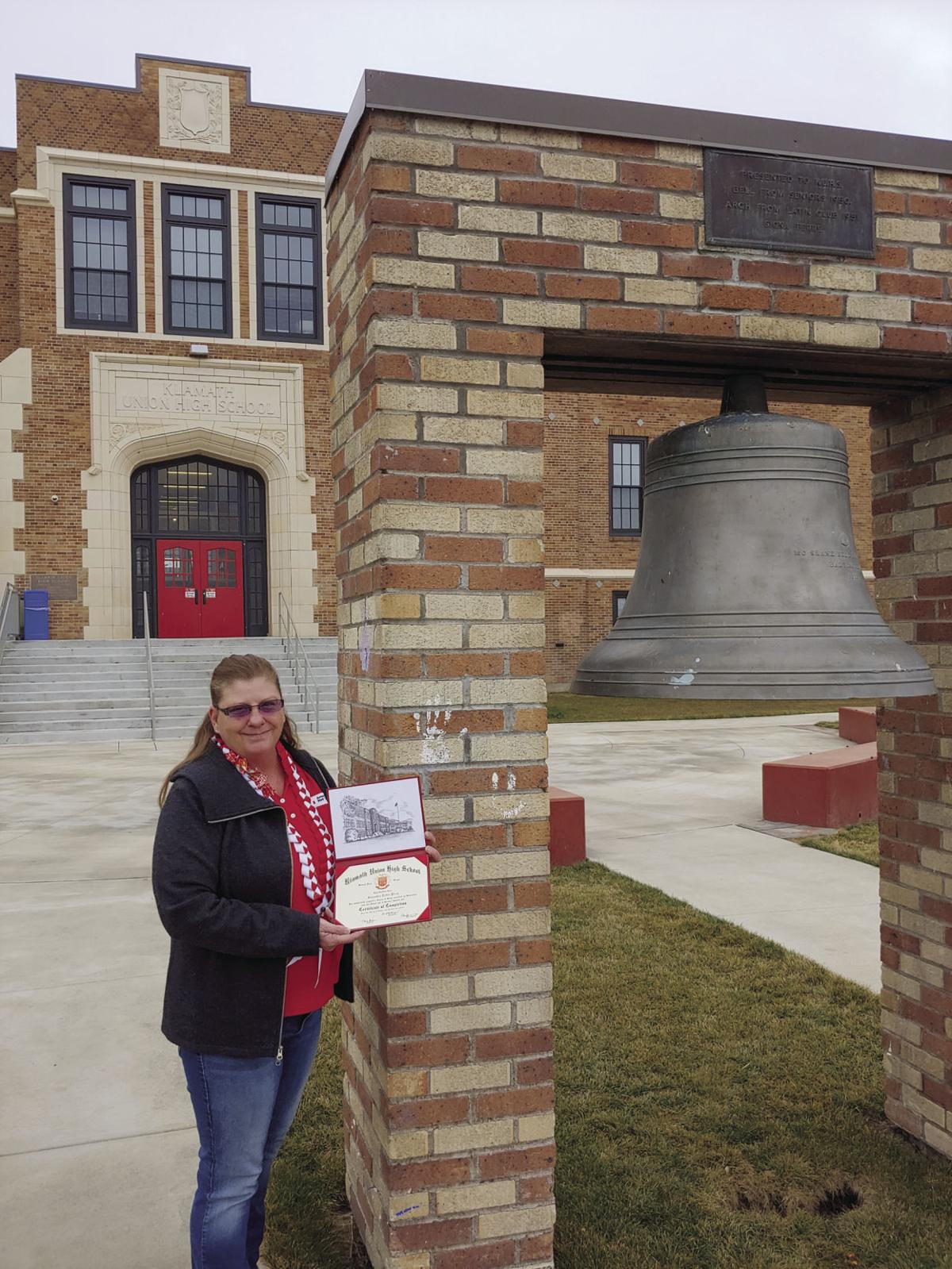 Samanthea Totten-Perry poses at the new Klamath Union High School. She holds a KU “Certificate of Completion” presented by Klamath Falls City Schools Superintendent Paul Hillyer at the school’s grand reopening ceremony and wears a lei made for the occasion by event organizer Gayle Yamasaki.

Samanthea Totten-Perry poses at the new Klamath Union High School. She holds a KU “Certificate of Completion” presented by Klamath Falls City Schools Superintendent Paul Hillyer at the school’s grand reopening ceremony and wears a lei made for the occasion by event organizer Gayle Yamasaki.

Samanthea Totten-Perry has lived and (quite literally) breathed the renovations to Klamath Union High School since May 2015, first as the project’s part-time budget manager and then as its full-time project manager. This month, as she wrapped up loose ends from her Monclaire Street office across from KU’s new entrance, Totten-Perry reflected on the accomplishment of the entire team.

“It was larger scale than anything ever done in Klamath County as far as building construction and renovations go, and definitely the most difficult job I’ve ever had,” said Totten-Perry. The project involved reducing the school’s footprint nearly 57,000 square feet and completely renovating 150,000 square feet of academic, arts and activity spaces.

“Many contractors, not associated with the project told me it just wouldn’t get done. Completing it has been my crowning achievement.”

Totten-Perry was born in Klamath Falls, where her father worked in the heavy-civil construction field and later established Totten Construction. She attended Mills Elementary and Lucille O’Neal Elementary, then moved frequently across the northwest as her father took various contracts.

After graduating from Meridian High School near Boise, Idaho, Totten-Perry worked with the Army National Guard as a heavy equipment operator and truck driver while she attended Boise State University — the first in her family line to obtain a college degree. She graduated in 1996 with a bachelor of science in construction management and a minor in business management, then continued construction work with the 158th Engineering Detachment to the 248th Combat Engineers of the Idaho Army National Guard.

It was in the 158th that she met her husband Earl Perry, now a code enforcement officer for Klamath County’s Building Division. “I can’t get away with anything!” joked Totten-Perry.

Totten-Perry has been back in Klamath Falls since 1996. She ran her family business while her father LeeRoy Totten fought a long illness, then did city inspections and construction consulting while earning a law degree at Concord Law School of Purdue University Global.

“By the time you go to court, you’ve already lost,” said Totten-Perry of her decision to pursue construction and contract law. “I knew that the ability to create good contract agreements and manage them is critical to good construction projects.”

While contract agreements weren’t a problem at KU, the project presented other big challenges.

National shortages of labor, subcontractors and supplies after the Great Recession drove up construction costs exponentially — about 30%. The project had to be redesigned and rebid for cost savings.

The project grew in January 2018 when the school board voted to expand the scope of work on the arts building, including adding air conditioning and more extensive renovations than previously planned.

And, of course, there were the myriad surprises typical of old buildings. Anyone who has renovated an old bathroom has faced rotten subflooring, off-plumb walls or nonstandard faucets. In an 88-year-old building without a full set of accurate blueprints, those surprises were multiplied 10,000-fold.

Nearly every day, contractors uncovered unforeseen challenges, such as unreinforced 30-foot walls that needed rebuilding, a 100-foot hallway sloping 13 inches that needed leveling, 3 inches of sand in a ceiling that needed removing, and old sidewalks buried exactly where new footings were supposed to go.

While troubleshooting these problems with Diversified Contractors, ZCS Engineering & Architecture and the entire renovation team, Totten-Perry found creative ways to recoup some time and money without compromising quality or safety.

For example, she self-contracted demolition and hazardous materials abatement work rather than relying on the higher-cost general contractor would need to charge to subcontract it. Her contractors sorted and recycled tons of metal from the mountains of otherwise dump-bound material. And she salvaged old bricks from demolished walls, reusing them for repairs where old vents or heavy equipment access points had left large openings

In the end, the per-square-foot project cost was close to $303. “This is a remarkable feat compared to other statewide and nationwide projects,” said Totten-Perry.

“We accomplished more than was originally planned, including an arts wing that is now on par with all the other spaces,” she said. “While it took longer than everyone hoped, it also brought a lot of money into the community through at least 29 local companies.”

To KU students interested in a career in construction, Totten-Perry has encouraging words:

“As we saw with this project, there is a real shortage of skilled tradespeople locally and nationally,” she said. “Students who apprentice for a trade like plumbing, electrical work, heavy equipment operation, and other construction trades can make $80,000 a year or more.”

Rather than taking a much-needed vacation, Totten-Perry is planning to begin a position as project manager with Klamath’s Rocky Mountain Construction. She also looks forward to continuing many hours of volunteer work with the Klamath County Planning Commission, Klamath County’s Community Emergency Response Team, the American Red Cross, the American Legion Klamath Falls Post 8, and Forty and Eight, the Legion’s honor society.

'As we saw with this project, there is a real shortage of skilled tradespeople locally and nationally. Students who apprentice for a trade like plumbing, electrical work, heavy equipment operation, and other construction trades can make $80,000 a year or more.'