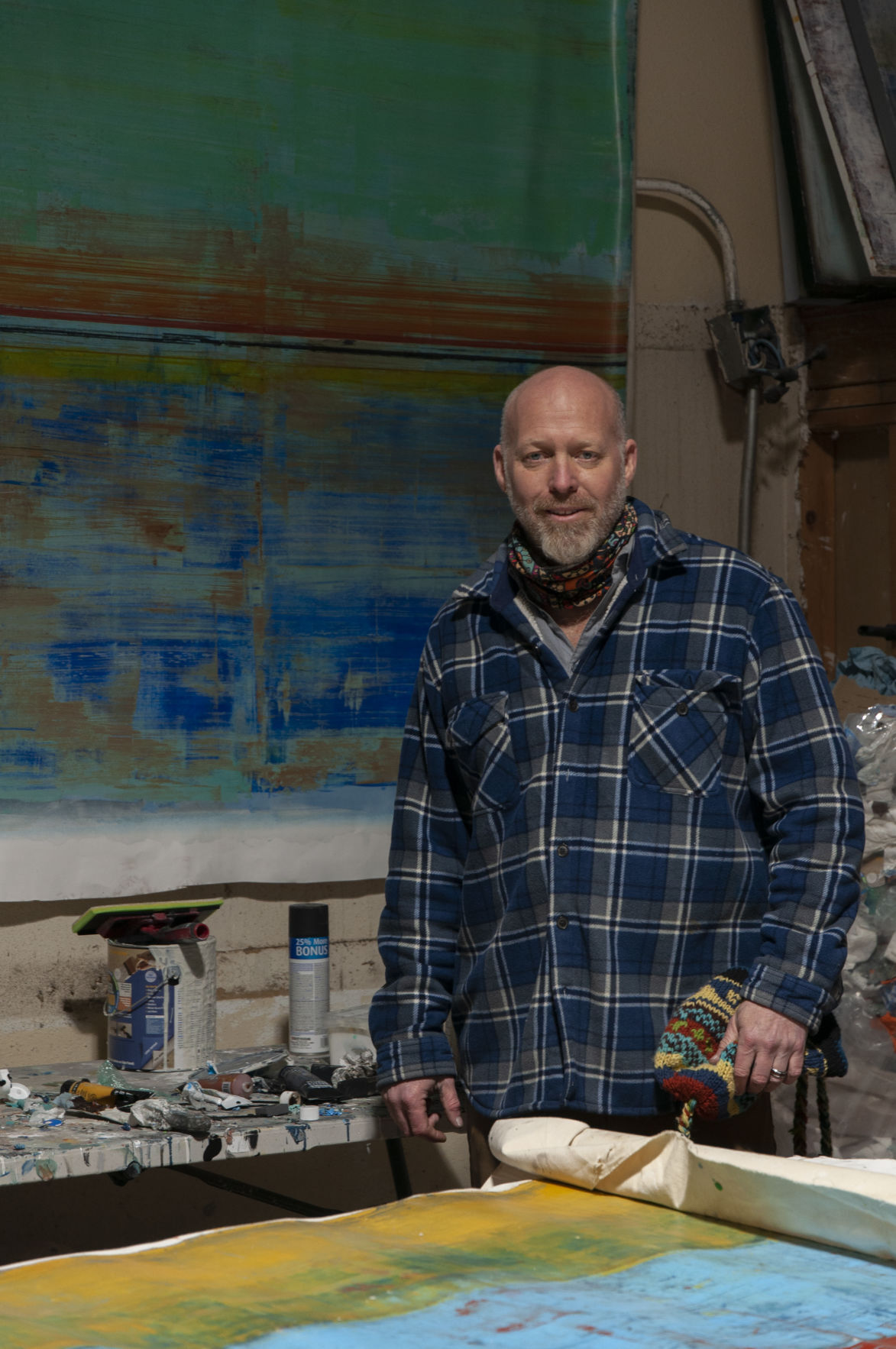 Rob Tillberg made the move from Florida to Klamath Falls and his art moved with it. The abstract, expressionist painter has been moved by the calm colors of the Klamath Basin, less hectic than the work he was doing back in Florida. 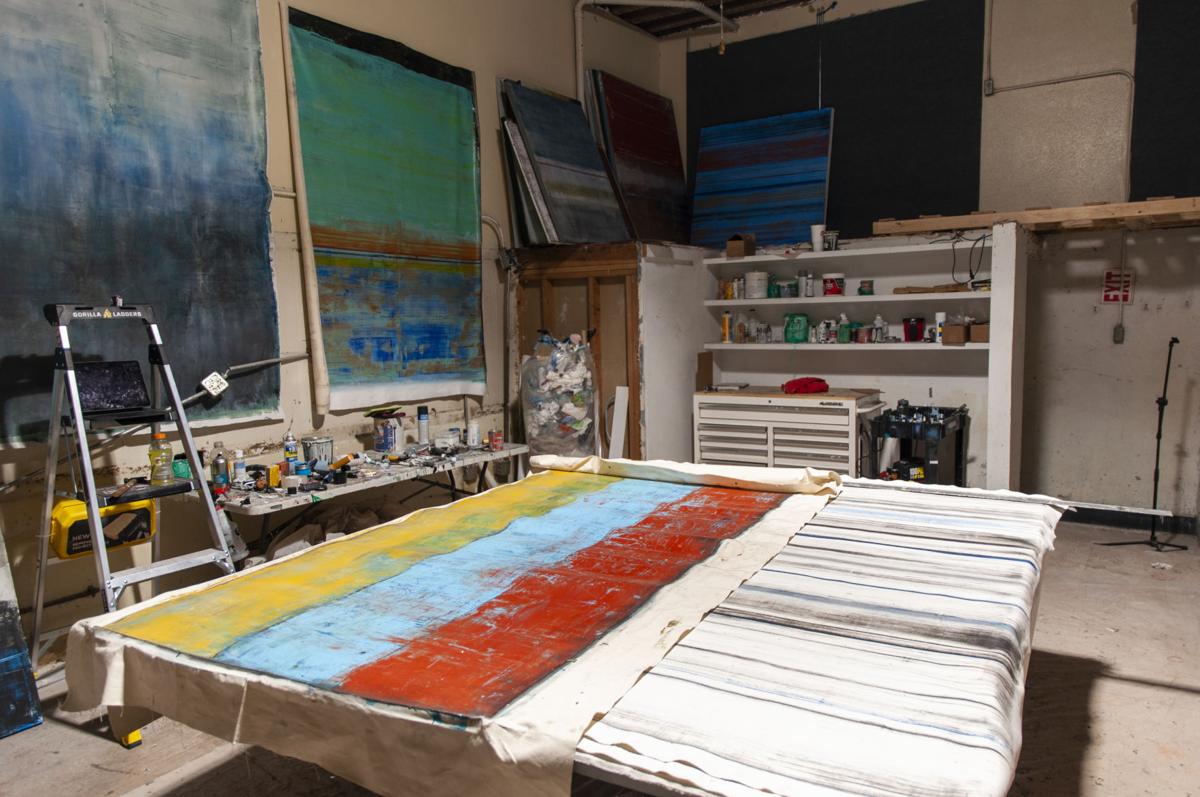 Rob Tillberg is setting up a studio and gallery space in Klamath Falls. Moving from the opposite corner of the country has changed his work dramatically. 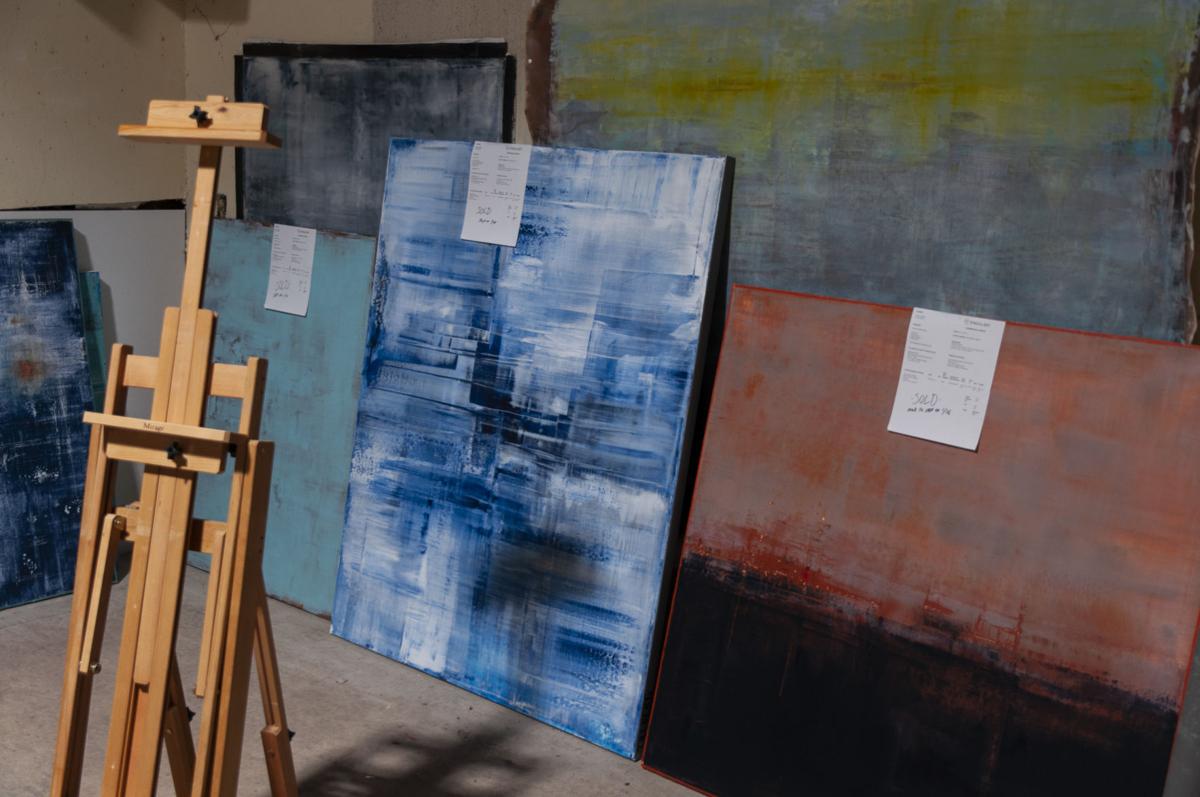 Tillberg’s abstract art sets him apart from much of the painting being done in the Basin. 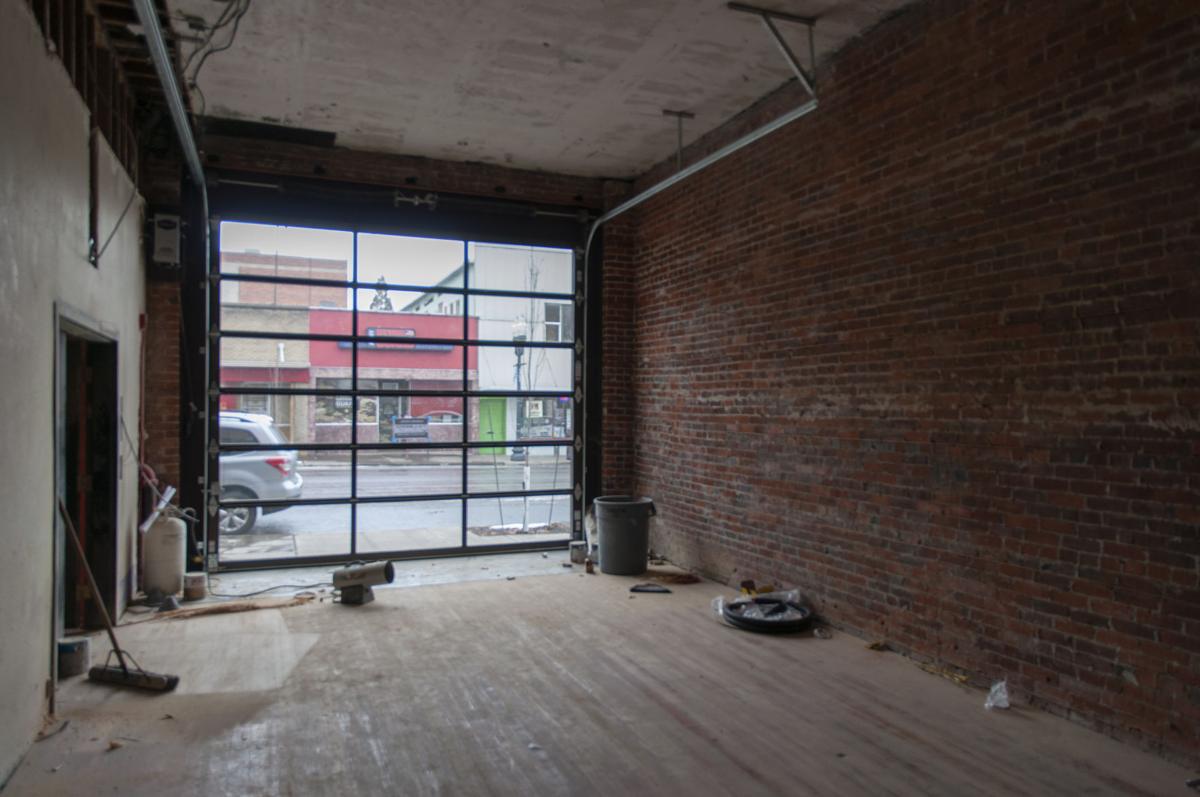 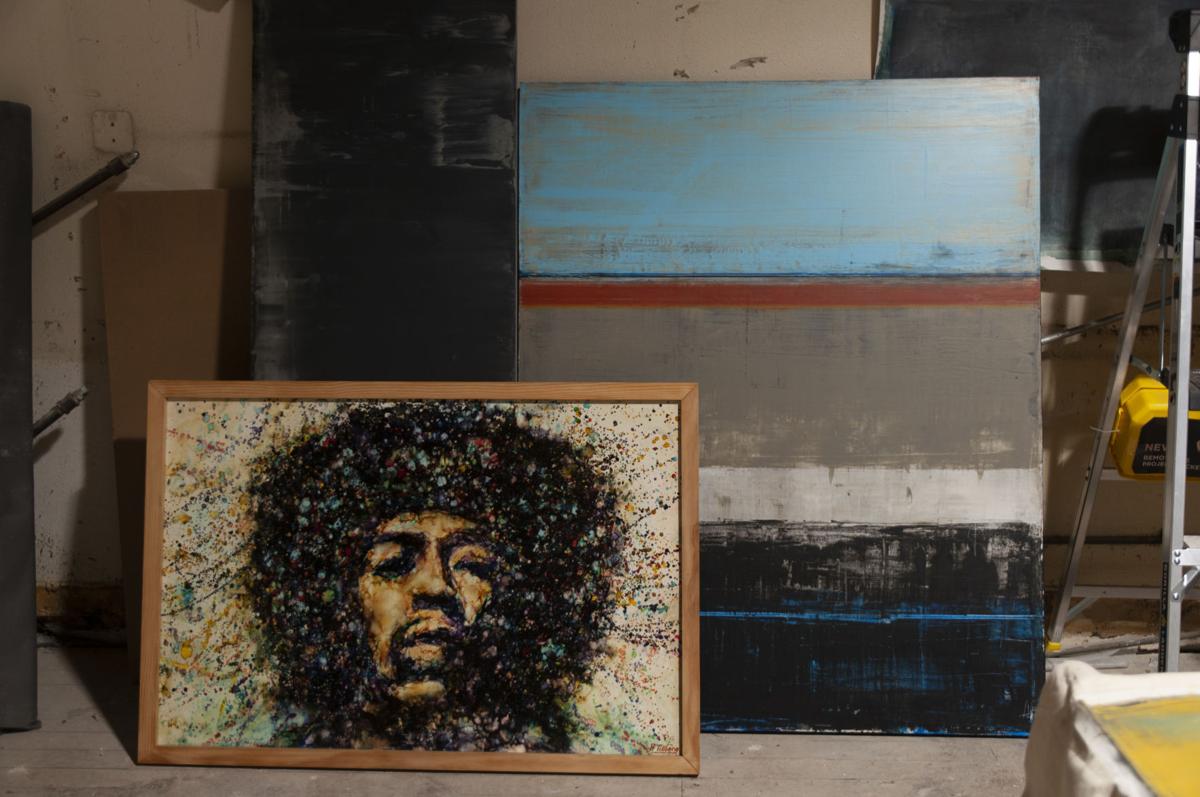 Tillberg also takes on portraits of famous people, often ones who fit his style and who have personalities that lend themselves to abstract expression.

Rob Tillberg made the move from Florida to Klamath Falls and his art moved with it. The abstract, expressionist painter has been moved by the calm colors of the Klamath Basin, less hectic than the work he was doing back in Florida.

Rob Tillberg is setting up a studio and gallery space in Klamath Falls. Moving from the opposite corner of the country has changed his work dramatically.

Tillberg’s abstract art sets him apart from much of the painting being done in the Basin.

Tillberg also takes on portraits of famous people, often ones who fit his style and who have personalities that lend themselves to abstract expression.

As Rob Tillberg’s environment has changed, so has his art. From drawing life-sized versions of “Star Wars” characters on pieces of paper taped together as a kid to the large, minimalist, abstract paintings of his present day, Tillberg has an eclectic body of work.

“I’ve always been creating something,” he said. “Usually, it’s painting.”

Through studying art in college in Virginia and living in St. Petersburg, Florida for nearly 20 years, Tillberg produced mainly photorealistic paintings of people, animals and landscapes. But life along the Gulf of Mexico got too hectic, so he and his wife followed a brother-in-law to Klamath Falls in 2019.

Tillberg’s art immediately shifted to the abstract. Having already begun to experiment with adding features like dots and splatters to his pieces roughly six years ago, a more minimalist, less realistic concept took over. Colors muted, curves straightened and canvases largened. Tillberg said that was indicative of his move to Klamath Falls—his life had been chaotic in Florida, and things calmed once he moved out West.

“This kind of stuff just came out when I got here,” he said.

Now, Tillberg’s pieces are large, abstract rectangles (some more than six feet wide) featuring moody natural pigments and anchored by straight lines. He calls it “industrial with a vintage vibe.” Abstract art’s originality and freedom attracts him—instead of trying to replicate something in the real world through his paintings, he gets to put something completely new on the canvas.

“This is from totally within,” he said. “It’s all spontaneous.”

That’s not to say the art is completely disconnected from reality—in many cases, Tillberg finds himself inspired by structures, landscapes and colors he’s seen around Klamath Falls. He also makes his own paint medium—a hybrid of oil and acrylic—and often uses natural pigments to dye it. He’s even used dry, powdered algae from Upper Klamath Lake to make a mellow green. He rarely uses a brush, instead opting for a painter’s knife to apply paint to canvas in straight lines and swipes.

Sometimes Tillberg does get the urge to do a landscape, in which case he simply adds a charcoal farmhouse or other structure to make an abstract painting a little less abstract.

Buyers have been receptive to the newer, more neutral style—Tillberg sold more than 200 pieces last year.

"I think people are loving that because the real world is crazy,” he said. “They want to come home and have something mellow.”

Tillberg said having an established online presence helped him sell more art during the pandemic, when in-person shows and galleries were limited. He’s in the top 5% of viewed artists on Singulart, an online art marketplace. But he missed having a physical space to display his work and interact with people, so he’s opening a gallery at 1014 Main St. in the next few months.

“I walked by this place during the first two weeks I got here,” he said. “I just fell in love.”

The space is in the old Pelican Hotel, which had been vacant for several years after nearly a century of hosting shops, restaurants and living spaces. The building’s owner is in the process of restoring it, and a restaurant will occupy the 1012 Main St. space adjacent to Tillberg’s gallery. He hopes, post-pandemic, that restaurant-goers waiting for a table will wander into the gallery to check out his art.

“I want it to be welcoming,” Tillberg said, adding that he's envisioning it as more of an open studio than a stuffy exhibition room. Having sold the overwhelming majority of his paintings online since his move to Klamath Falls, he hopes he can develop those kinds of relationships with local residents, too.

Tillberg walked around the long, narrow space, clad with exposed brick and flooded with light from a garage-style door at the storefront. Like his paintings, the future gallery has an industrial-yet-accessible aesthetic. Despite its abstraction, it still evokes a sense of calm.

“It’s going to be nice when they’re done,” he said.