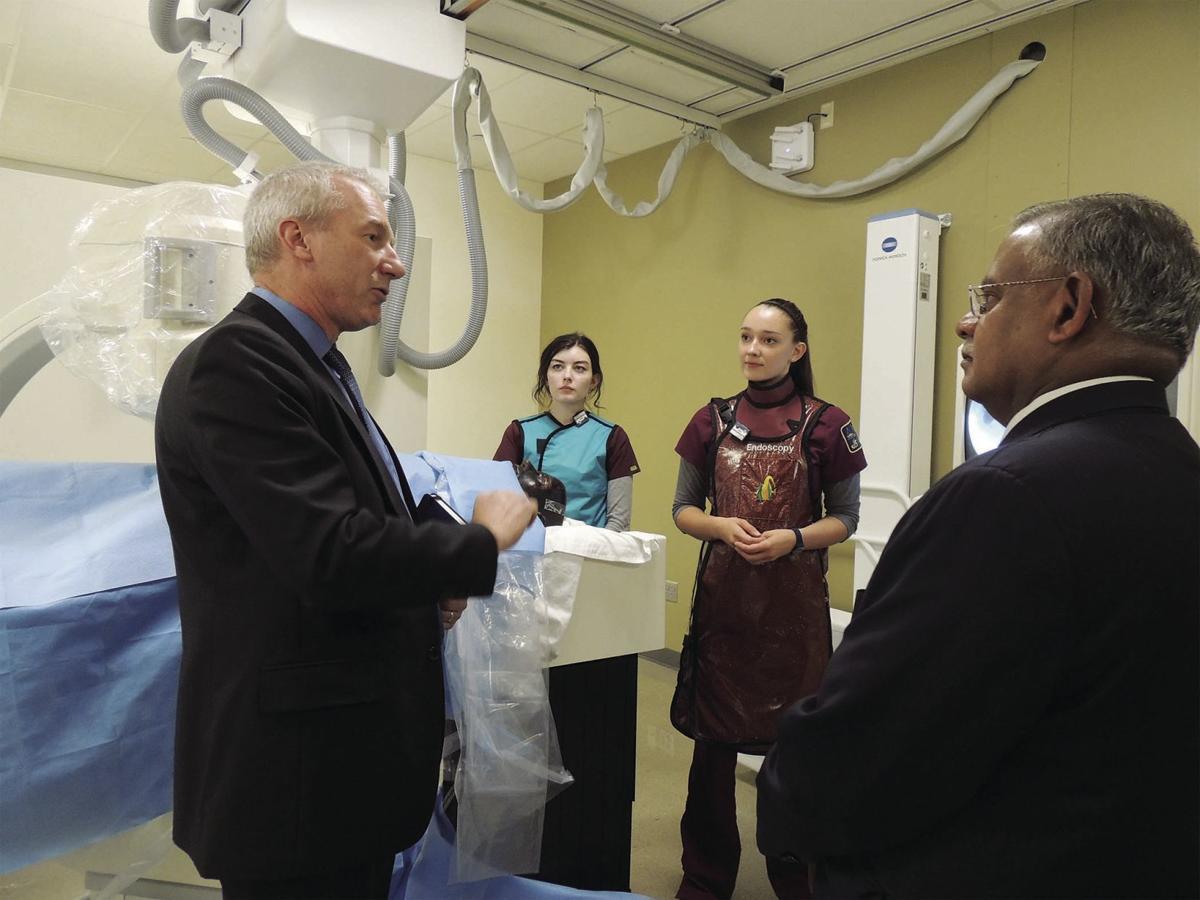 Students talk with the President and CEO of Konica Minolta, David Widmann, (left) and the President of the Oregon Insitute of Technology, Dr. Nagi Naganathan, (right) after showing them the equipment installed in the new radiologic science lab at Oregon Tech Thursday afternoon. 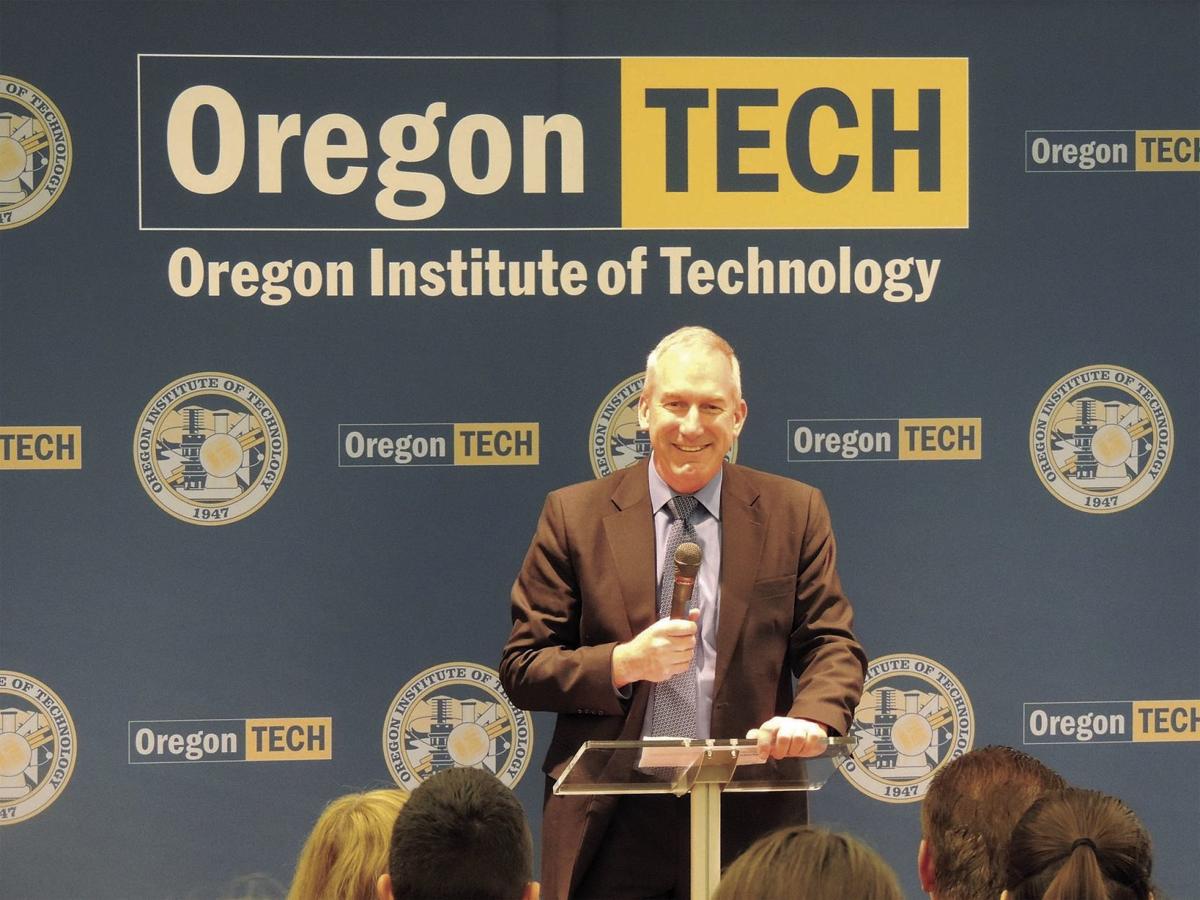 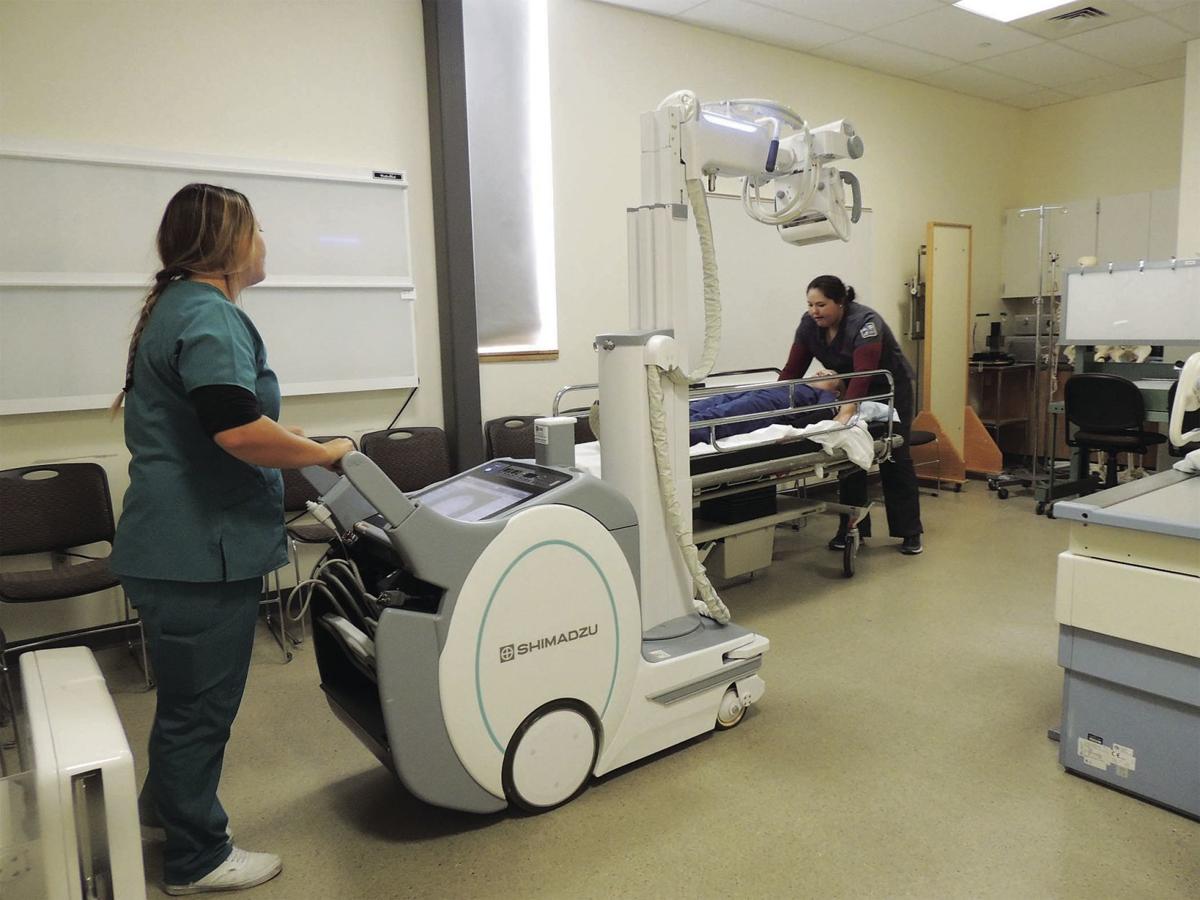 Students show off a new portable x-ray machine for those at the ribbon cutting ceremony on the new radiologic science lab at Oregon tech Thursday afternoon. The portable machine can be used to take bedside images or scan those in a wheelchair. 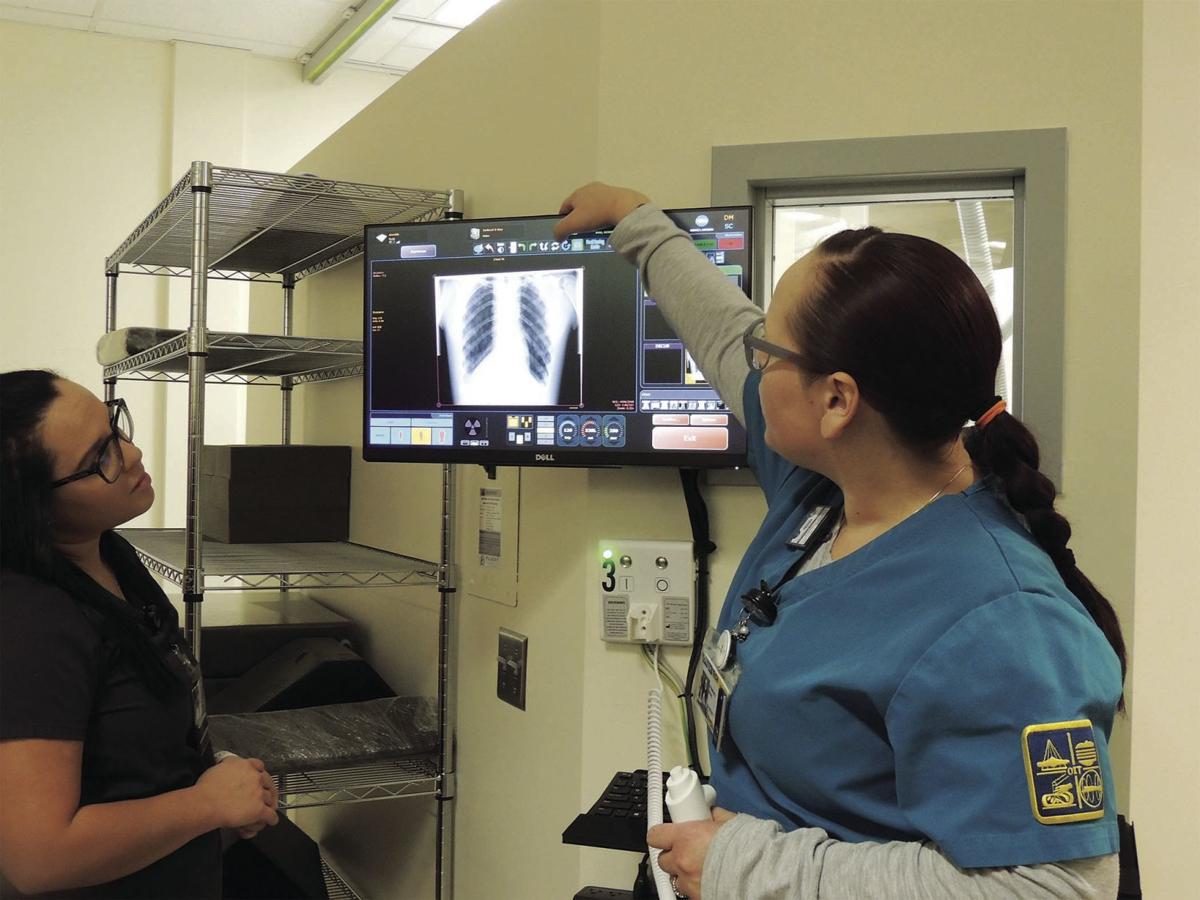 A student shows new ways to manipulate an image on systems in the new radiologic science lab at Oregon Tech Thursday afternoon. 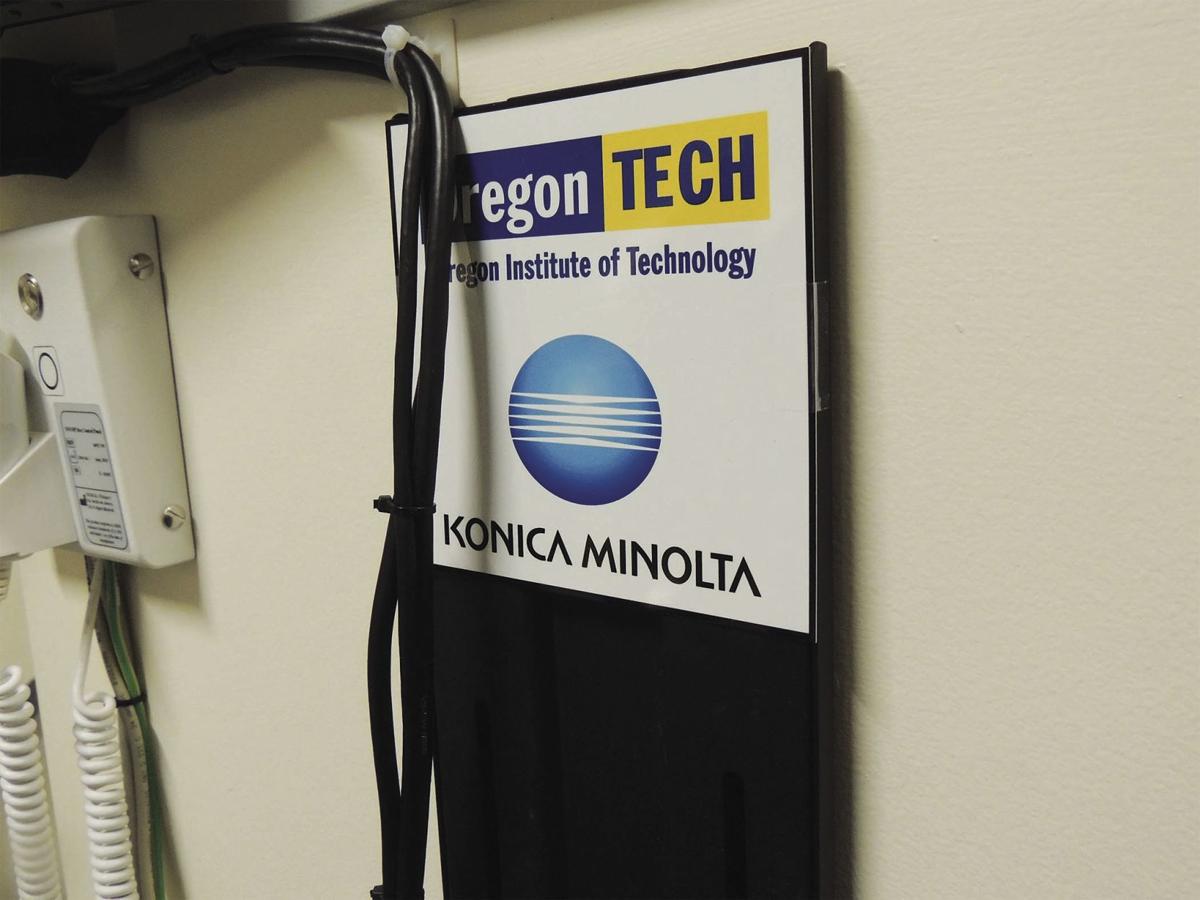 A placard featuruing the logos of Oregon Tech and Konica Minolta below a monitor to view images on in the new radiologic science lab at Oregon Tech unveiled Thursday afternoon.

Students talk with the President and CEO of Konica Minolta, David Widmann, (left) and the President of the Oregon Insitute of Technology, Dr. Nagi Naganathan, (right) after showing them the equipment installed in the new radiologic science lab at Oregon Tech Thursday afternoon.

Students show off a new portable x-ray machine for those at the ribbon cutting ceremony on the new radiologic science lab at Oregon tech Thursday afternoon. The portable machine can be used to take bedside images or scan those in a wheelchair.

A student shows new ways to manipulate an image on systems in the new radiologic science lab at Oregon Tech Thursday afternoon.

A placard featuruing the logos of Oregon Tech and Konica Minolta below a monitor to view images on in the new radiologic science lab at Oregon Tech unveiled Thursday afternoon.

The project featured a $1.85 million price tag, but university president Dr. Nagi Naganathan said the lab provides opportunities beyond just getting the newest equipment for students to get their hands on, although that is important, too.

“This is more than getting the right equipment in front of our students, which, in my opinion, is a required but not a sufficient scenario,” he said. “We want them to be a part of the innovation cycles in the careers they are going to be practicing.”

He emphasized Oregon Tech’s place in research and innovation, not just producing graduates who pass the minimum expectations of the workforce.

“Our students, by working with the state-of-the-art equipment, such as the ones from Konica Minolta, are able to think beyond in terms of the innovation streams,” Dr. Naganthan said. “What more can you do with those observations? How best you can improve the human condition by getting it advanced in many ways? It is not simply taking a measurement, writing it down and giving it to someone.”

Konica Minolta President and CEO David Widmann said the program they’re developing with Oregon Tech is unlike anything they’ve done before.

“Oregon Tech provides a very unique opportunity where you’ve got one of the best universities in the country for delivering rad technologists, stenographers, and the future leaders of radiology,” said Widmann. “And by partnering with Oregon Tech, we see the opportunity to bring cutting edge technology in front of students whom we can work with to develop, really, the future path of care in X-ray and in imaging.”

Radiologic Science Program Director Don McDonnell knows the importance of his students working with the most up-to-date technology that they will be expected to use once they graduate.

“This is an exact copy of what is being used out in the field. It will make them more versatile,” he said. “We’re already very marketable, but this is going to sweeten the deal for us. We can simulate real life, a real day in radiology now.”

Allowing students to learn on the tools they’ll use on the job after graduation was also something Dr. Naganathan focused on.

“Oregon Tech, given our mission of focusing on project–based learning, would like these students to work with equipment that is state-of-the-art and very close to what they are going to experience in practice,” he said. “Hence, this facility will be one of the unique ones you are going to find in an educationally-focused environment. Such equipment may be residing in research settings, but we are very pleased to be able to have our undergraduate students learn by using state of the art equipment, while they are earning their undergraduate degrees.”

McDonnell said he’s felt the excitement from the students who’ve gotten their hands on the equipment already, especially from the juniors who are used to practicing on the older stuff.

“Our juniors are just absolutely tickled pink because they had the old equipment — that equipment was 12 years old — the life expectancy of these machines is about five to seven years, so when they came in and saw this shiny new lab they were just, they were beside themselves,” he said.

“We have been able to do this in a very quick order so that students will have that opportunity to work on the best of equipment as we start the new year.”

Dr. Naganathan also sees opportunities to work with healthcare providers in the community to provide trainings on equipment that Oregon Tech now has. He also said he’s talked with those at Konica Minolta about being a training ground for their staff who do things such as sales and might not be as versed in the technology.

“We are hoping to interest practitioners, hospitals, physicians and other key stakeholder groups to come to Klamath Falls and enjoy both Klamath Falls as well as this wonderful facility we have so that they know what kind of preparation our students are experiencing as they become career ready professionals,” he said. “And I guess it is as much an economic development activity for Klamath Falls, in a way, as we are creating these unique enterprises within the university.”

McDonnell said Konica Minolta will also use Oregon Tech as a beta site for software upgrades and the like, “so this will be a long-term relationship.”

Dr. Naganathan also foresees a relationship with Konica Minolta that continues to grant students opportunities outside of the classroom.

Widmann agreed that Konica Minolta shares a goal of continuing to give students opportunities with the business.

“What we would like to do is bring OT students into our environments as we develop precision medicine platforms,” Widmann said.

Oregon Tech is the only Radiologic Science program in the state of Oregon and one of the few in the county, Dr. Naganthan said.

“We, as Oregon Tech, truly want to affirm our position as the industry’s university. That means we have to be connected, just not in providing the talent, but also being part of the innovation ecosystems of the industry.”

Core Medical is involved in installation, calibration and maintenance of equipment, according to Dr. Naganathan.

Widmann sees the value of the relationship between the university and the imaging company felt throughout the community.

McDonnell said he’s seen the program grow at Oregon Tech from cohorts of 48 students to a sophomore cohort of 55 this year.

“The reason we’re increasing the numbers is not only because we have the new equipment, but it’s also because there’s a real need for techs out in the field,” McDonnell said.