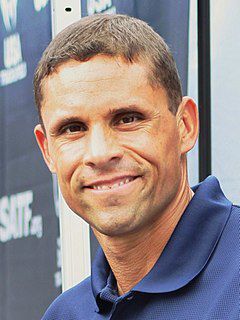 Ashton Eaton is interviewed in 2015 at the World Athletics Championships in Beijing.

Ashton Eaton is interviewed in 2015 at the World Athletics Championships in Beijing.

Oregon Tech President Nagi Naganathan announced this week that the university is preparing to launch a campaign to build a new track and has tagged two Olympic Gold medalists to help promote the launch.

The “Bringing Home the Gold” campaign will kick off March 10.

Dan O’Brien, who grew up in Klamath Falls and is a graduate of Henley High School, has agreed to be a promoter for the project to construct the track, according to Naganathan. The 1996 gold medalist for the Atlanta Olympic games currently lives in Arizona.

Ashton Eaton, a graduate of University of Oregon, has also shown interest in promoting the project. Eaton, a Bend native, is a two-time gold medalist. He competed at the London and Rio Olympic games.

“(Eaton) has become a good friend and he has agreed to support our project,” Naganathan said. “They even offered to run on the track for a promotion video.”