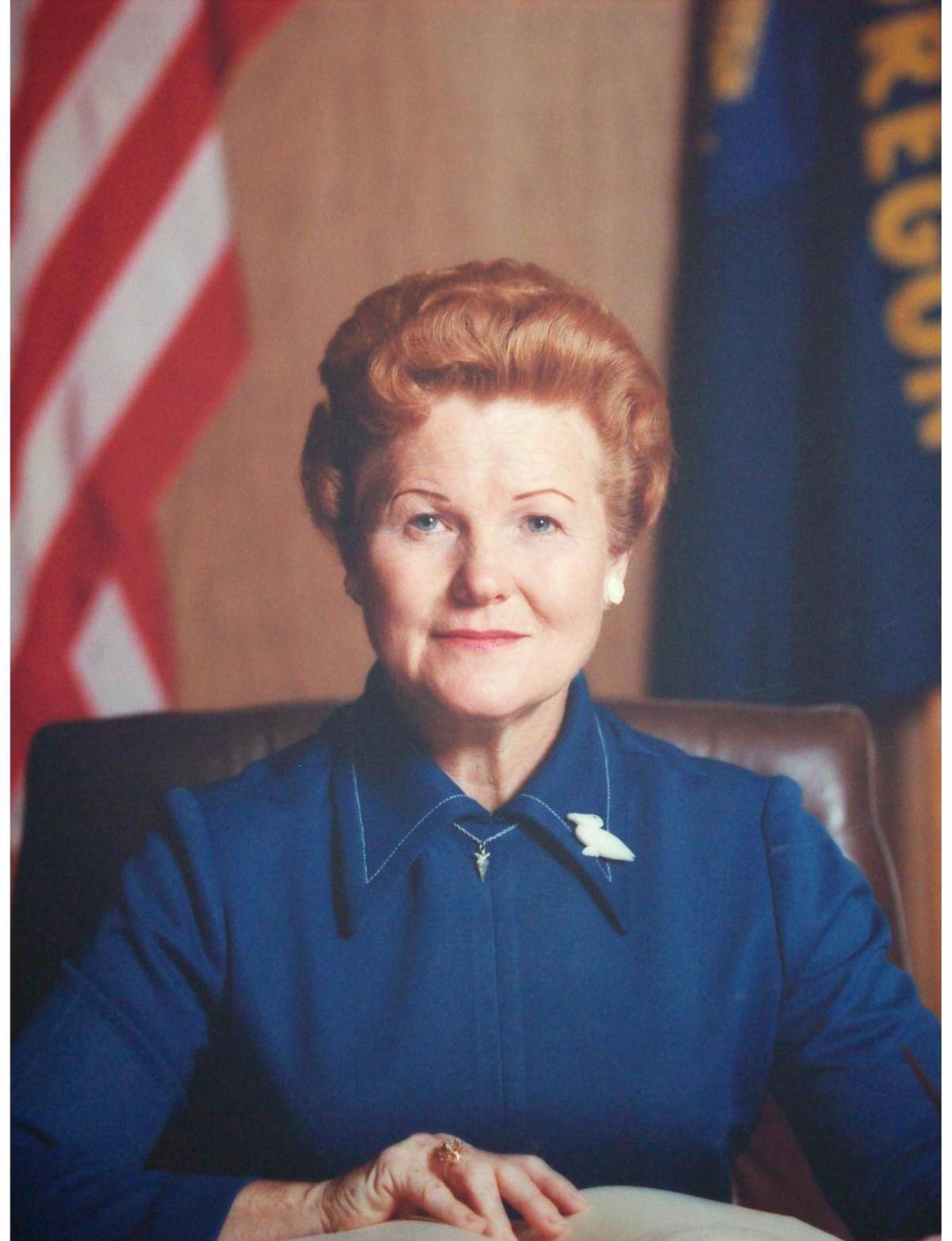 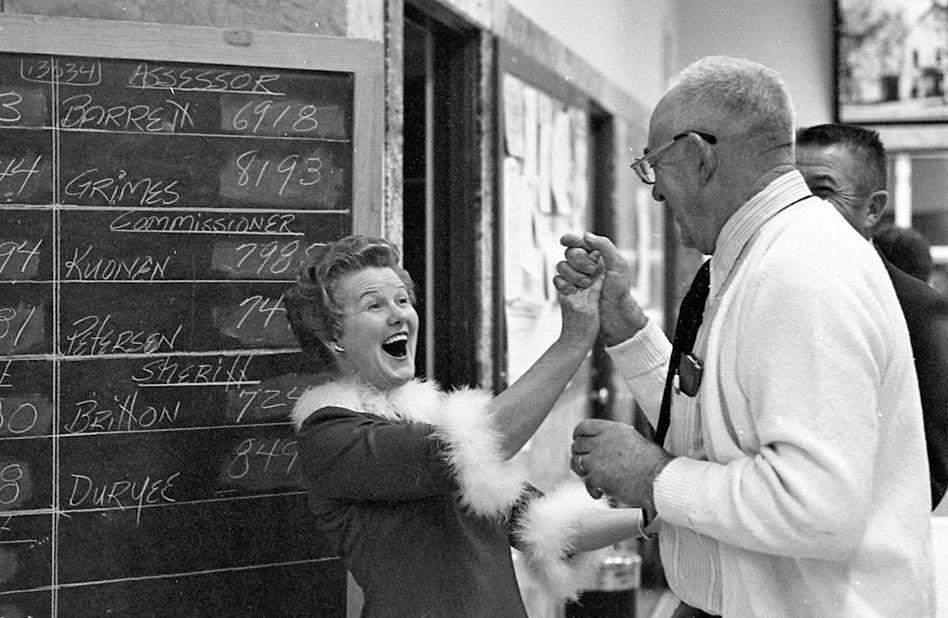 Nell Kuonen celebrates her election as a county commissioner in 1976. 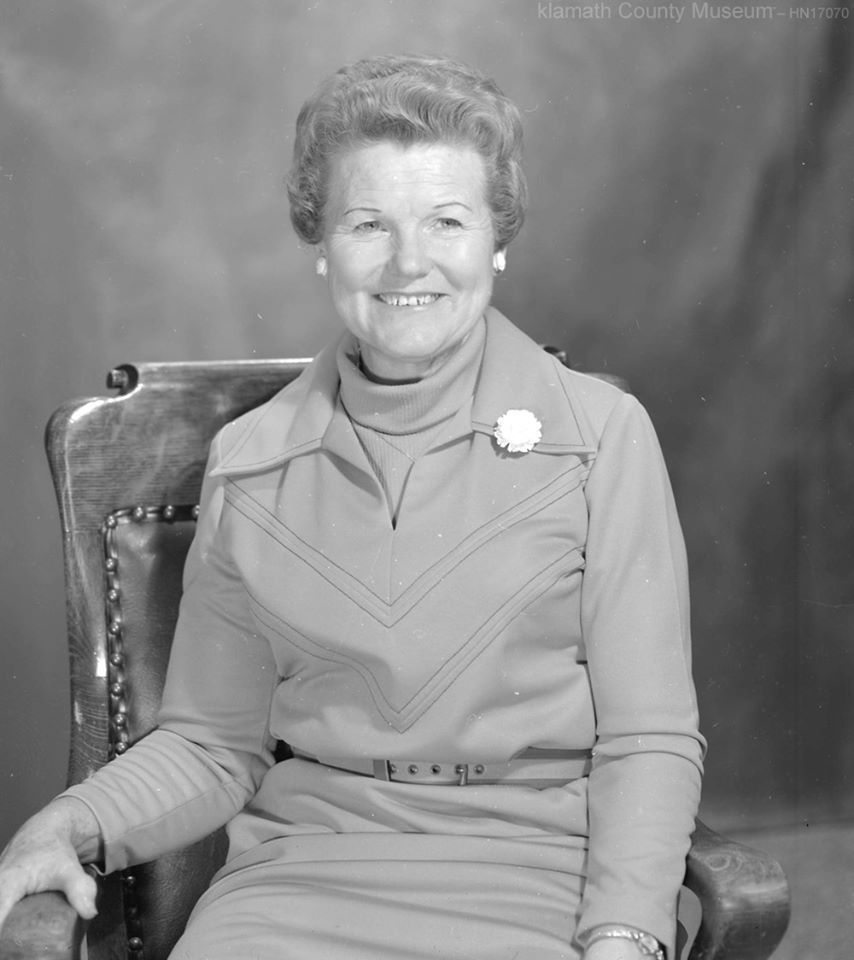 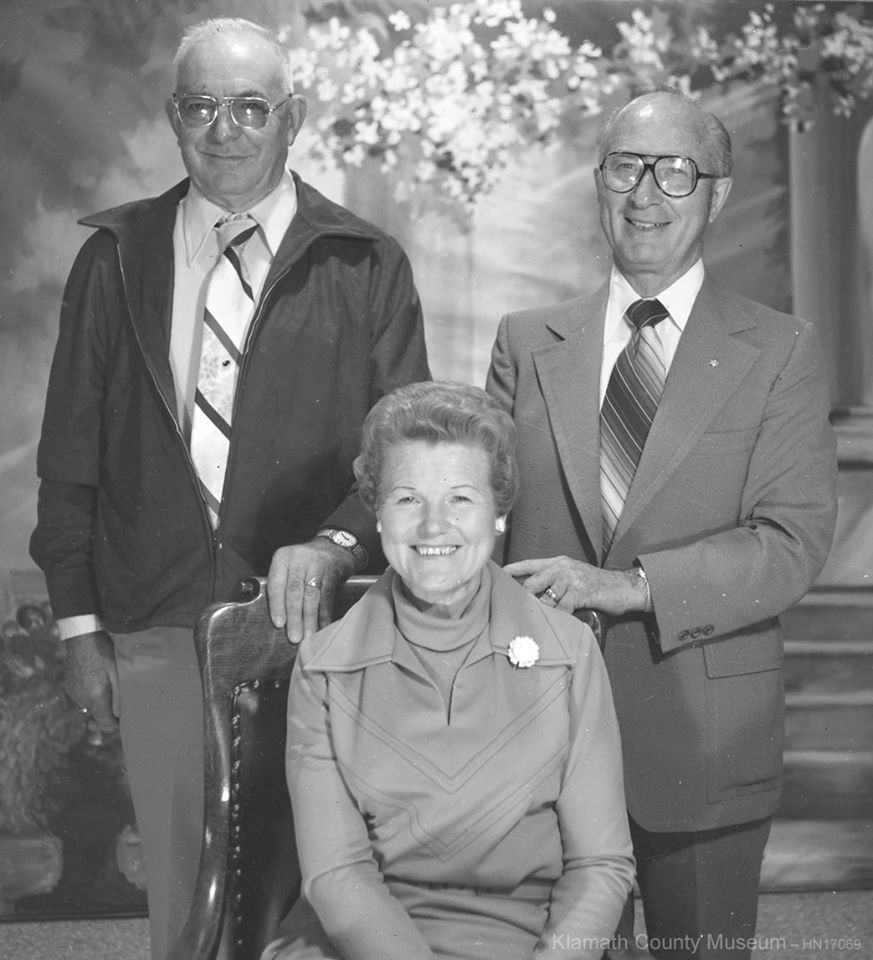 From left to right: Commissioners Lloyd Gift, Nell Kuonen and Floyd Wynne in 1978. 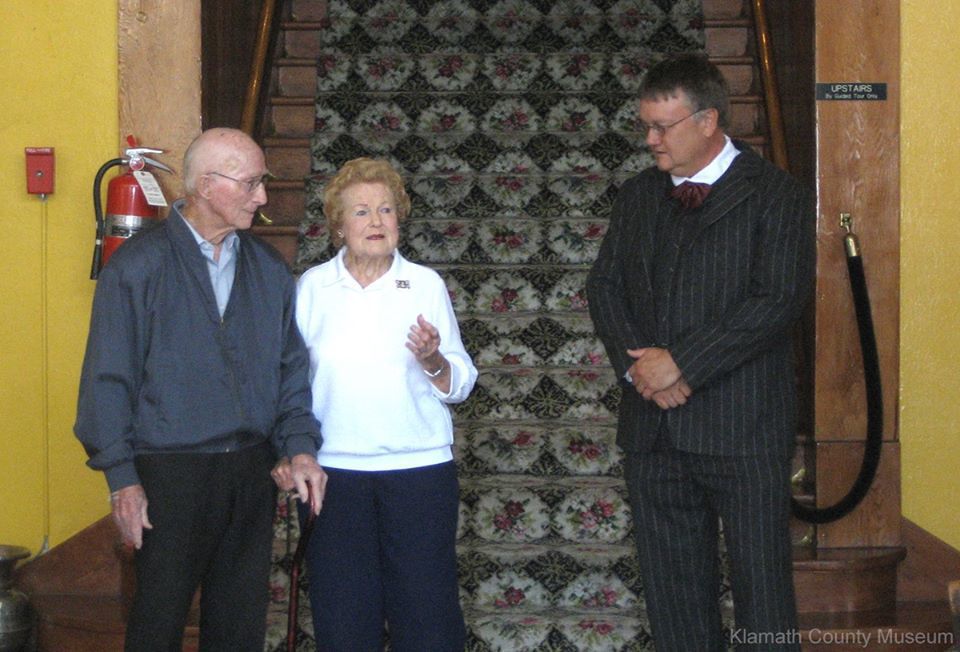 Former County Commissioners Floyd Wynne and Nell Kuonen returned to the Baldwin in 2008 to celebrate the 30th anniversary of the opening of the Baldwin Hotel Museum with Museum Director Todd Kepple (right).

Nell Kuonen celebrates her election as a county commissioner in 1976.

From left to right: Commissioners Lloyd Gift, Nell Kuonen and Floyd Wynne in 1978.

Former County Commissioners Floyd Wynne and Nell Kuonen returned to the Baldwin in 2008 to celebrate the 30th anniversary of the opening of the Baldwin Hotel Museum with Museum Director Todd Kepple (right).

The late Nell Kuonen was a trail blazer who was ahead of her time when she settled in Klamath Falls in 1970. She was the first woman in several of the positions she held throughout her 91 years and immersed herself in the growth and politics of Klamath County, appealing to both sides of the political aisle in a way that ensured the region she called home remembers her with fondness and for the legacy she left behind.

Born near Lubbock, Texas, Nell moved around throughout California before making it over the border to Klamath.

Nell and her husband Frank Kuonen moved to the area after visiting their friend Vernon “Duke” LaComb here multiple times. LaComb asked Frank to be his business partner on the development of the Tingley Lake Estates, a mobile home park, and the couple finally made the move to the Basin that would remain their home.

Although the Kuonens sold the property in 2014 due to their old age, they continued living there, and that is ultimately where Nell died on March 26, according to her daughter, Rita Olson.

“It was their joy to make this 40 acres that had been basically swamps and tules, there wasn’t much here when they came, and they developed it into a beautiful park-like setting. Dad landed almost all of the trees that are here, and he put in all of the plumbing and the infrastructure, and Mom was a good helper as well. She would get down in the ditches and help him put in pipes, and I mean she was as much of a worker as my dad in terms of helping to make this venture a success,” their daughter said.

It was the family’s business that lead to Nell’s involvement with the Klamath County Chamber of Commerce where she served on the Executive Board.

“She was always an advocate of Klamath County, and I’ve heard many people say that she is synonymous with Klamath County in terms of her love for the area,” her daughter said. “She was just so totally taken by the area and the people.”

In a biography about Nell’s life that Olson is writing based on her interviews with her mother, she said Nell would welcome every new business to the community with donuts and coffee.

It wasn’t long before her growing resume in Klamath propelled her into the political arena in the county. She was contacted by incumbent commissioner Bryant Williams who told her that he wasn’t seeking re-election and that he thought she should run. Olson said her mother was shocked at first and wasn’t initially on board. Ultimately, though, Olson said her father supported the move, which Olson was surprised by.

She said they weren’t a very political family and her father never had much interest in politics. However, he encouraged his wife, and Nell became the first woman elected to the Klamath County Board of Commissioners in 1976.

“Many of the jobs that she held back in the '50s and '60s — she was the first woman to hold those positions, and at the time, you know, she never really thought much about it,” Olson said. “She was a working mom and that was a bit unusual during the '50s and '60s. But, I, you know, being raised that way, you don’t really consider that as unusual.”

Olson said her mother often had support from Democrats and Republicans alike and had a bi-partisan way about her, while also being a “staunch” Republican. Nell was reelected in 1980 as a Klamath County Commissioner and later appointed by then-governor John Kitzhaber to fill a vacancy on the board in 1996.

A legacy of her time as a commissioner was the county acquiring the Baldwin Hotel. The owners of the hotel in the 1970s, Vera and Mort Jones, were planning to sell the property as they could no longer operate it, according to Olson. A Portland company was attempting to buy the building to demolish it and salvage the brick. Kuonen, however, along with her fellow commissioners, stepped in to preserve the building and the antiques housed there. The commissioners unanimously agreed to buy the hotel for $70,000 in 1977 and turn it into the museum it is today.

According to Nell’s biography, “After we bought it, the three of us went to the Baldwin and toured all the way through it. Vera had never opened any suitcase that had been left at the hotel. We found that most of the suitcases included two things: a clock and a dictionary. There were so many old things in that building, even a Cadillac desk. We didn’t even know that Cadillac made desks and we have one of the few remaining ones.”

As Nell was an advocate for the museums in Klamath County, she worked with many of the museum directors over the years, including current director Todd Kepple.

“She had a gift of making everyone she talked to feel special and appreciated,” Kepple said. “If everyone else feels the same way I do about her then she touched hundreds of lives in the community.”

He said Nell often served as a mentor to people in leadership positions after her retirement. “She personified what a community leader should be like,” Kepple said, recalling how he felt everyone running for office sought Nell’s endorsement.

One candidate who sought advice and encouragement from Nell was Commissioner Kelley Minty Morris. Olson said Morris met with her mother when she was running for office to seek her wisdom gained after years as a figure of importance in the county.

“As a woman in Klamath County government, I’ve always respected and attempted to emulate the sensible, measured leadership of former Commissioner Nell Kuonen,” Morris said in an email to the H&N. “Her dedication to truly listening to the people inspired me every day. I thank her for creating a path for women in leadership.”

Kepple echoed how Nell’s leadership was unique in that she was not overly partisan and was able to talk with people from a variety of political perspectives.

Another priority of Nell’s was education. Olson said her mom set up scholarships at both Oregon Institute of Technology and Klamath Community College.

“Education has always been mom and dad’s focus not only for their kids and grandkids, but their great grandkids as well,” Olson said.

Nell also earned the respect of people beyond Klamath County, including former President Ronald Reagan, whom she met when she worked on his campaign for governor of California. Nell and Frank attended Reagan’s presidential inauguration in Washington D.C., according to Nell’s biography. Reagan later appointed her to the Klamath River Basin Compact Federal Commission, a post to which President George Bush reappointed her under his administration.

Olson said her mom had a way of listening to people who didn’t share her views, political or otherwise, and finding a solution that both parties could live with. She described her mother as “open-minded” and recalled a time that, despite Nell holding positions in various Republican groups throughout her life, she supported a Democratic candidate for office because she felt he was the right person for the job at the time.

“It seemed like even though she was a staunch Republican, Democrats would enjoy being with her, even though they didn’t agree politically,” Olson said. “They still felt like she was fair, she would listen.”

Outside of Nell’s illustrious career and extensive philanthropy, Olson recalled her mother as a woman who always had a smile on her face.

“Till the day she died, she just had a very positive attitude about things. She would say she had good days and better days. And I mean she did, even though she had a lot of pain in various parts of her body, she rarely would dwell on that. She always tried to find that silver lining.”

When Olson herself moved to Klamath, she said everyone she met sang her mother’s praises.

“She had a huge heart, and she loved whatever she was doing, she was totally devoted to it, whether it be the people of Klamath County, her family or friends, she just loved and really cared for everybody.”

“She was a great lady and one to be admired,” Olson said. “And she had a great, full life.”