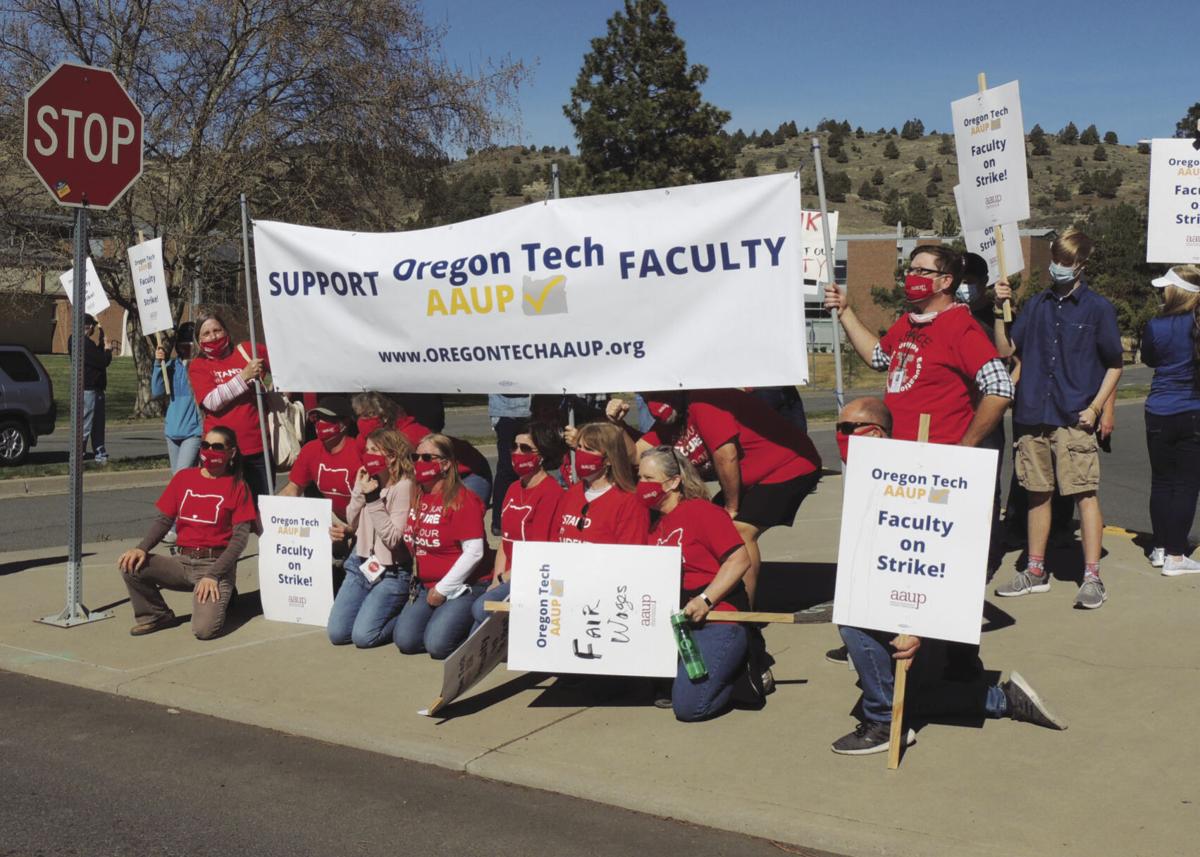 The Oregon Educators Association K-12 teachers union joined the faculty picket line in solidarity at the Oregon Institute of Technology on Tuesday for the second day of the strike. 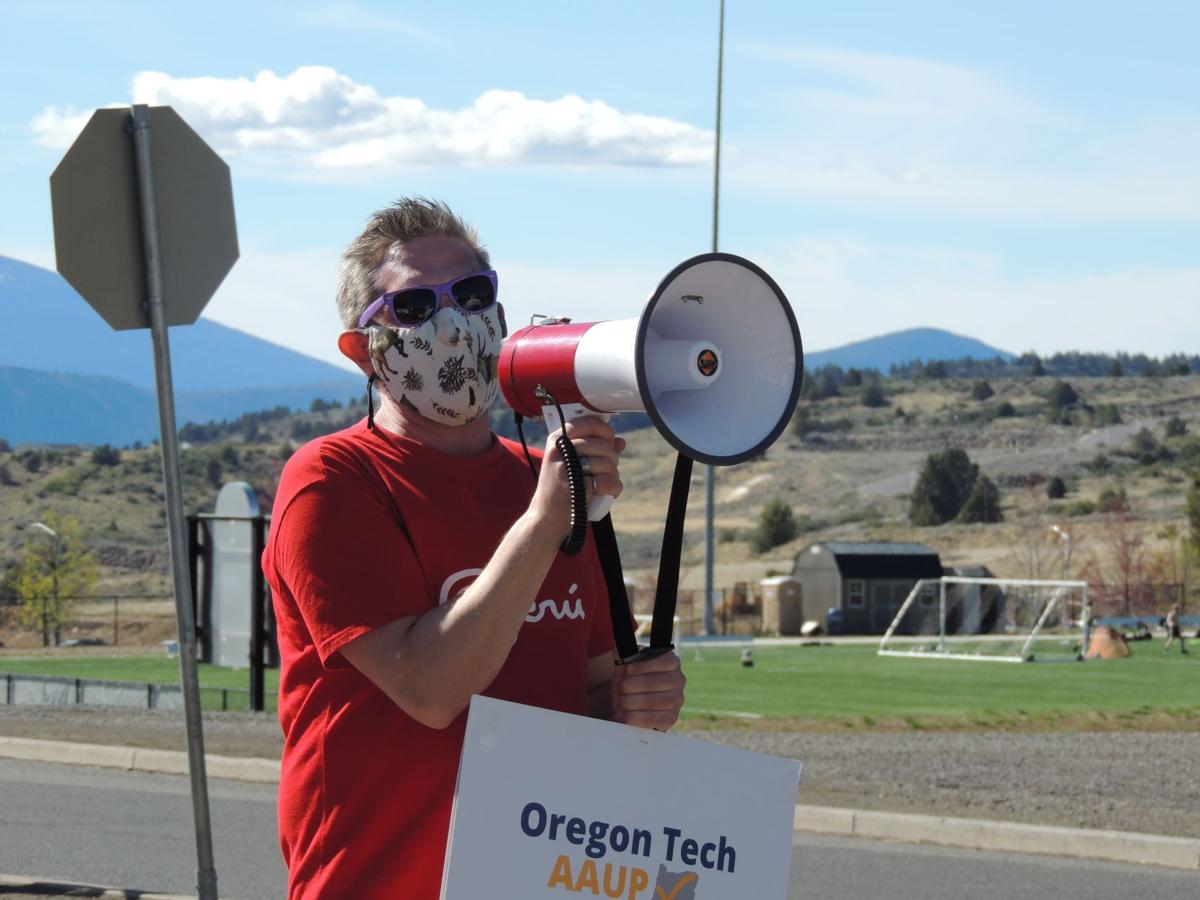 Oregon Tech faculty union president Sean St. Clair organizes a march in front of the campus on Tuesday as the strike stretched into its second day. 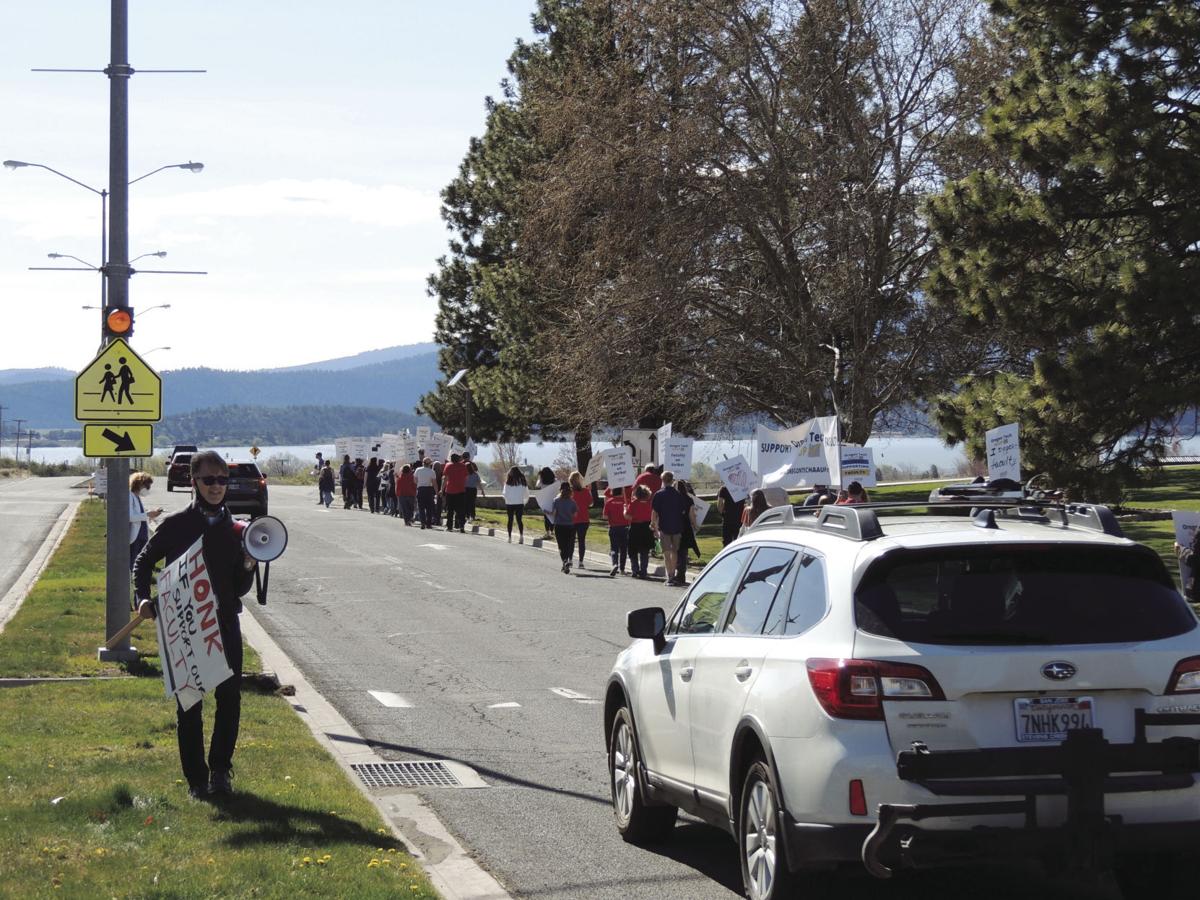 The strike picket line at the Oregon Institute of Technology marches in front of campus on Tuesday as the faculty strike stretched into its second day. 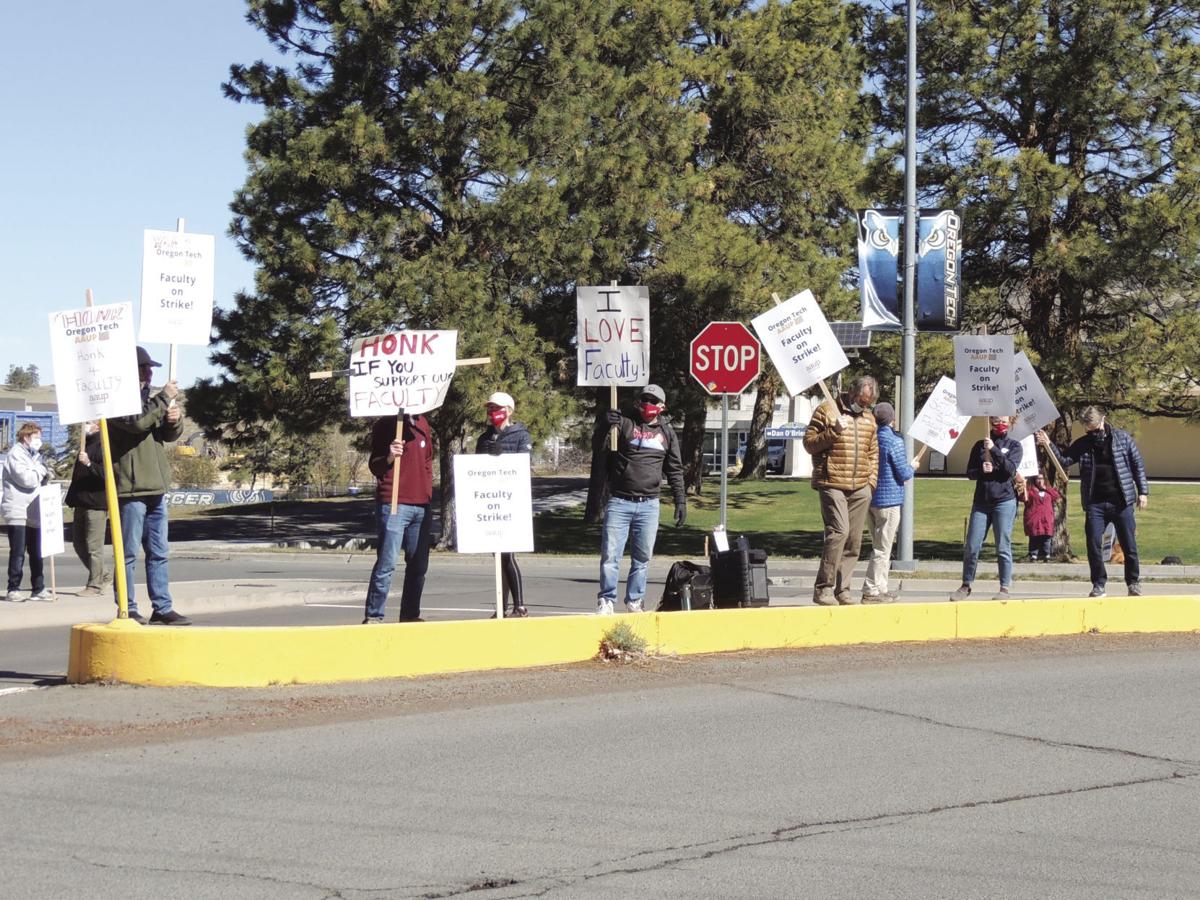 Day two of the faculty strike at the Oregon Institute of Technology began at 8 a.m. on Tuesday.

The Oregon Educators Association K-12 teachers union joined the faculty picket line in solidarity at the Oregon Institute of Technology on Tuesday for the second day of the strike.

Oregon Tech faculty union president Sean St. Clair organizes a march in front of the campus on Tuesday as the strike stretched into its second day.

The strike picket line at the Oregon Institute of Technology marches in front of campus on Tuesday as the faculty strike stretched into its second day.

Day two of the faculty strike at the Oregon Institute of Technology began at 8 a.m. on Tuesday.

The historic faculty strike at the Oregon Institute of Technology concluded its second day Tuesday, while students struggled to know if their classes would take place and who would teach them.

Oregon Tech administrators told students that there was a plan in place, which would mean minimal disruptions to classes if faculty chose to strike. But students said Monday and Tuesday that they arrived to empty in-person and online classes without instructors on both days.

Vice President of Institutional Advancement Ken Fincher said they are working “around the clock” to get classes covered, but administrators had no way of knowing how many and which faculty members would participate in the strike until it began.

“We anticipated that the first day or two would be bumpy, because faculty are not required to tell us that they are not going to be in the classroom or online,” Fincher said. “So we have a plan and have been implementing our plan and solutions ... but we have had instances where there wasn’t an interim professor in the class.”

Fincher apologized on Tuesday to students who showed up on time, only to find an empty classroom.

“We don’t think this strike is achieving anything other than doing a disservice to our students,” Fincher said. “But to those students, we apologize.”

Some students have joined the picket line and said they do not blame faculty for the disruption to their educations.

First year civil engineering student Connor Roark said only one of his four professors this term has continued to teach despite the strike. He said he did receive a message from an adjunct who is covering one of his classes.

Roark said he’s had two lectures this week with his professor who is not striking — but that the professor said they had to cover for additional classes, too.

“They’re not doing this to hurt us,” Roark said. “They’re striking and using their last bargaining tactic with the administration.”

Roark joined the picket line between classes to support the union.

As faculty bump into their students on the picket line and talk to colleagues who aren’t striking, they hear about how things are going in the lecture halls and labratories.

“I’ve heard from a lot of people saying these classes aren’t being taught, no one’s showing up for this class — these kinds of things — the dental hygiene clinic couldn’t run today either, and it just certainly seems like the senior administration really didn’t think about how all these things get done. Faculty make these things get done,” said union spokesperson Kari Lundgren. “Students shouldn’t be caught in an impossible situation.”

Another bargaining session is scheduled to begin at 1 p.m. on Wednesday.

Both the administration and the union have to prepare for a strike that could last a few more days or a few more weeks.

“I had people asking me this morning about, ‘When can we go back?’ ‘When will this be over?’” Lundren said. “No one actually wants to leave their classes, leave their students. People want to be back as soon as possible, but not at the expense of their future viability — their future as instructors.”

Shiloh Castelli, a medical laboratory science student at the Portland-Metro campus, is angry at administration for letting the situation deteriorate.

Castelli’s lectures on Monday and Tuesday were canceled because the instructors assigned to them didn’t show up. Castelli was also told that their program’s labs — which Castelli normally attends Wednesday, Thursday and Friday — would not be held because of the hands-on nature of labs and the specific experience required to lead them.

Castelli has spearheaded a student effort to support faculty and share information. Castelli said that if there is a silver lining to this, it’s an increased desire from students to have more information about where their money is going and how their college is managed.

On Tuesday, the Oregon Educators Association, the local K-12 teachers union, joined the strike in solidarity with the faculty. The picket line marched along campus chanting things like “I’d rather be teaching” and “Whose university? Our university.”

Lundgren said Tuesday that she was “pleased and impressed” by the turnout on the picket line. She noted that the Oregon Tech faculty was the last faculty at a public university in Oregon to unionize and the first to strike.

The strike at OIT is the first faculty strike in Oregon higher education history. OIT’s faculty unionized in 2018.