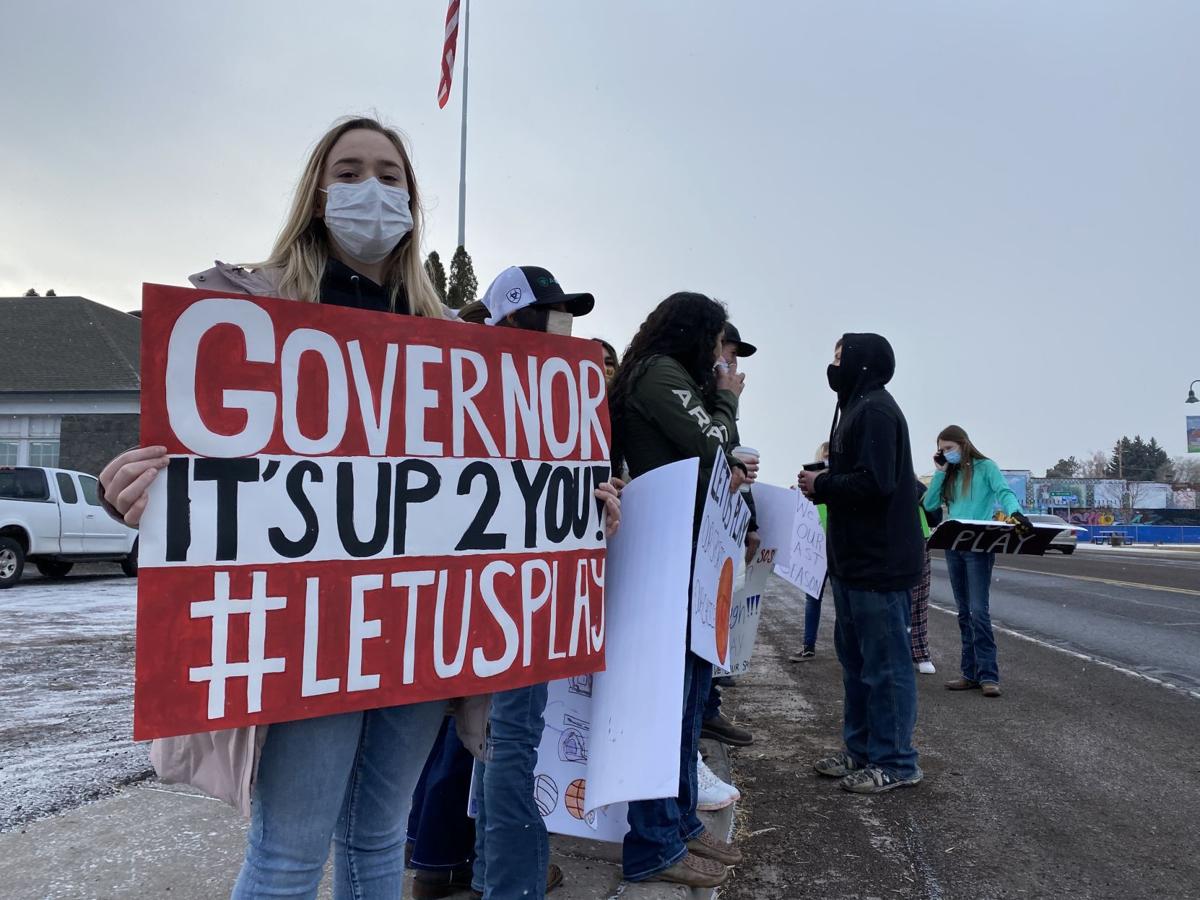 At left, Brytnea Cilione, 17, a senior at Butte Valley High School, led a group of mostly juniors and seniors in a walkout of classes Friday morning in Dorris. The group of student-athletes are urging California Gov. Gavin Newsom to allow high school sports to restart during the pandemic. 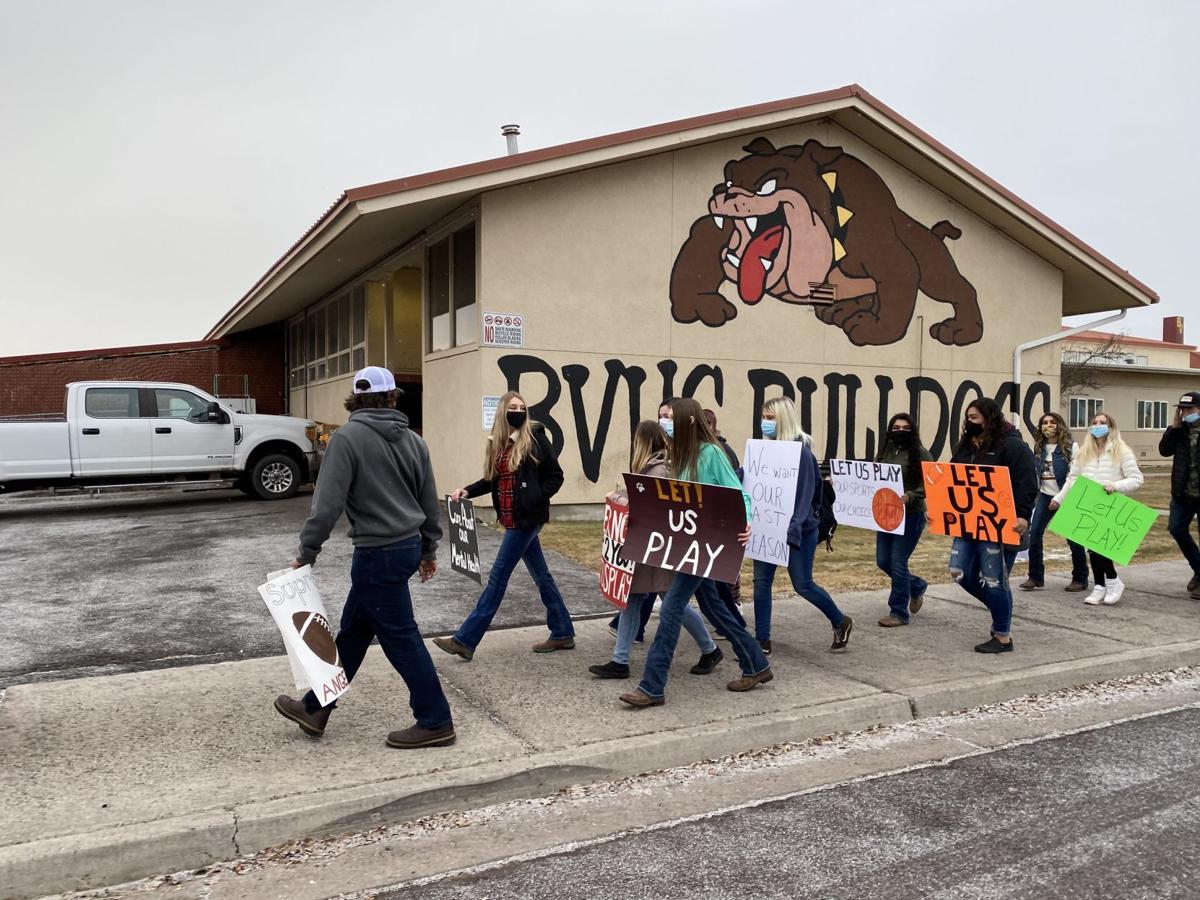 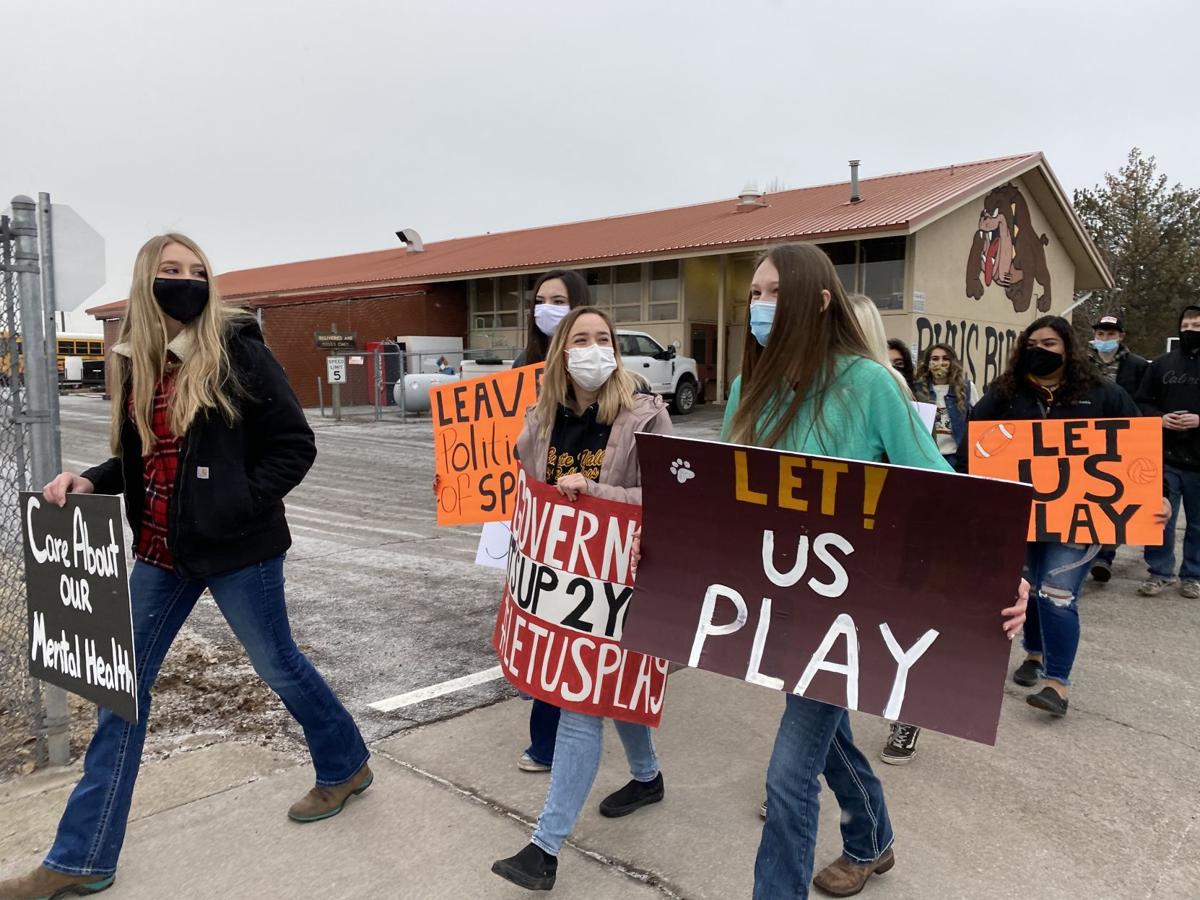 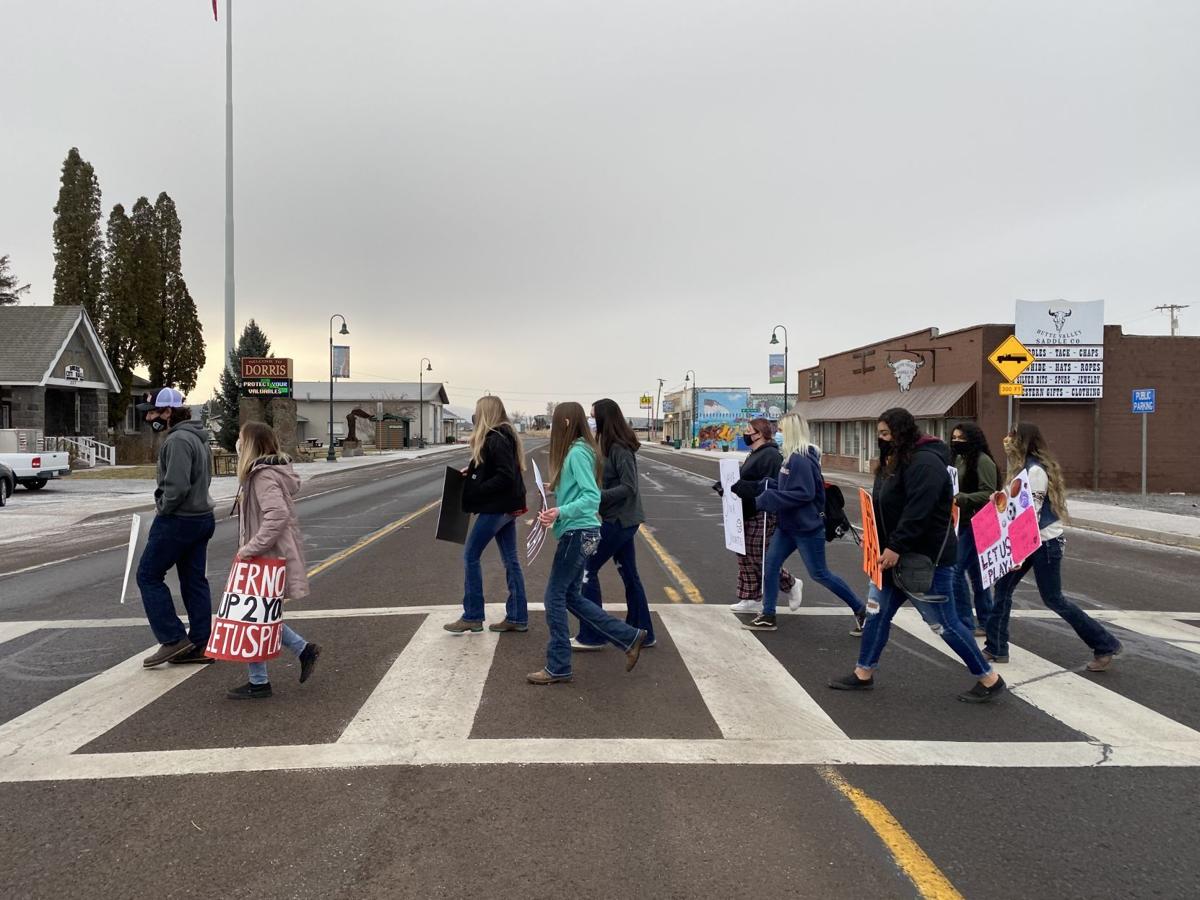 At left, Brytnea Cilione, 17, a senior at Butte Valley High School, led a group of mostly juniors and seniors in a walkout of classes Friday morning in Dorris. The group of student-athletes are urging California Gov. Gavin Newsom to allow high school sports to restart during the pandemic.

Their Dad, Joey Cilione, dyed his beard Butte Valley maroon and gold and Brytnea watched her sister celebrate with her teammates. Brytnea knew then that she wanted to have senior night just like that. Without a senior night to look forward to or even a basketball season this year, she jumped into action to protest the lack of sports opportunities this year for students at Butte Valley High School.

Brytnea was one of a dozen or so students at Butte Valley High walked out of class at 8:05 a.m. on Friday, asking California Gov. Gavin Newsom to reinstate sports for teens.

“What I’m truly fighting for is for the rest of the school, for all those other kids that I know are very passionate about this sport, to be able to play,” she said.

“I know a lot of kids who aren’t coming to school because there’s no reason. There’s no extra-curriculars, there’s no sports, it’s not like it has ever been, and a lot of kids are missing out on that.”

The group planned to brave the cold all morning to bring awareness to the fate of sports this year, which is looking pretty grim thanks to COVID-19 levels throughout California. California's high school sports ban is currently scheduled to end Monday, Jan. 25, but as COVID-19 cases spike in the state, there are calls to keep the ban in place. However, walkouts in Dorris and other California high school's in the past week, are asking the governor to let the games begin.

Gathering outside the school, and walking to City Hall in Dorris, the group carried signs and shared concerns about losing their last basketball season. Passersby honked their horns in support and supportive parents and family friends brought cookies and cheered the students on.

Many of the student-athletes say they don’t plan to play sports at the college level so their senior year is especially important as their last season.

Some were looking forward to the little things, such as senior night and decorating lockers. Others said the lack of sports is affecting not only morale but mental health.

“There was nothing I was looking forward to more than my senior night and ever since my sister had hers, I was like, that’s what I want,” Britnea said on Friday.

And it’s not just basketball and senior night that may be missing, but most sports were canceled this year, due to high levels of COVID-19 in Siskiyou County. Sports are scheduled to start up for Klamath Falls City Schools and Klamath County Schools in February, pending changes from OSAA.

The only sport that Butte Valley could host this school year is track and field, and that isn’t guaranteed, Britnea said. So with inspiration from one of her teachers, who showed Britnea stories written about “Let them Play” rallies by student-athletes around the state, she took the idea for rally to her teammates.

“I knew that there was a lot of kids who wanted to have open gym and at least do something,” Britnea said.

Many of Cilione’s teammates will be missing out especially on basketball, widely the favorite sport among many of her peers. It’s also beloved by the community, located just near the Siskiyou-Klamath County border.

“The community comes together for our basketball games,” Cilione said, especially the Bulldog Classic, a large, annual tournament, brings schools from all over to Dorris.

“Me as a senior … I know that even though I want it, I probably won’t get my season,” Cilione said.

The 5-feet-tall-and-a-half point guard stands tall when it comes to standing up for those around her.

Brytnea and others hope that that can be changed for other students, even if they will miss out.

She knows of students who aren’t attending school because they aren’t able to play sports.

Brytnea said there are still some good things at the school, such as just being able to be there in person, as well as participating in FFA.

"There’s no fighting for that, either.”

“This is a way for them to have a teaching moment to learn to have their voices heard in the proper way,” Allen said from the steps of the school. “I support them 100%.

Allen started at Butte Valley as a football coach so sports are near and dear to his heart.

“We don’t want athletics to be the main reason why they’re here but unfortunately that is the reason some kids come here, and they get an education while they’re at it,” he added.

“If I thought there was an elevated risk right here in Dorris, I may be looking at this differently, because those people out there are my kids, my staff.”

A “Let them play” rally is being planned in Yreka next Friday.

“We’ve been thinking about going to that one as well,” Brytnea said.