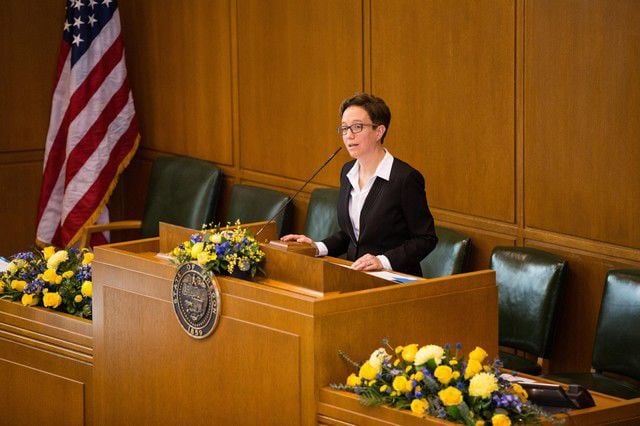 FILE - House Speaker Tina Kotek, D-Portland, announced last week recently that she is ready to drop her gavel and run for governor next year. 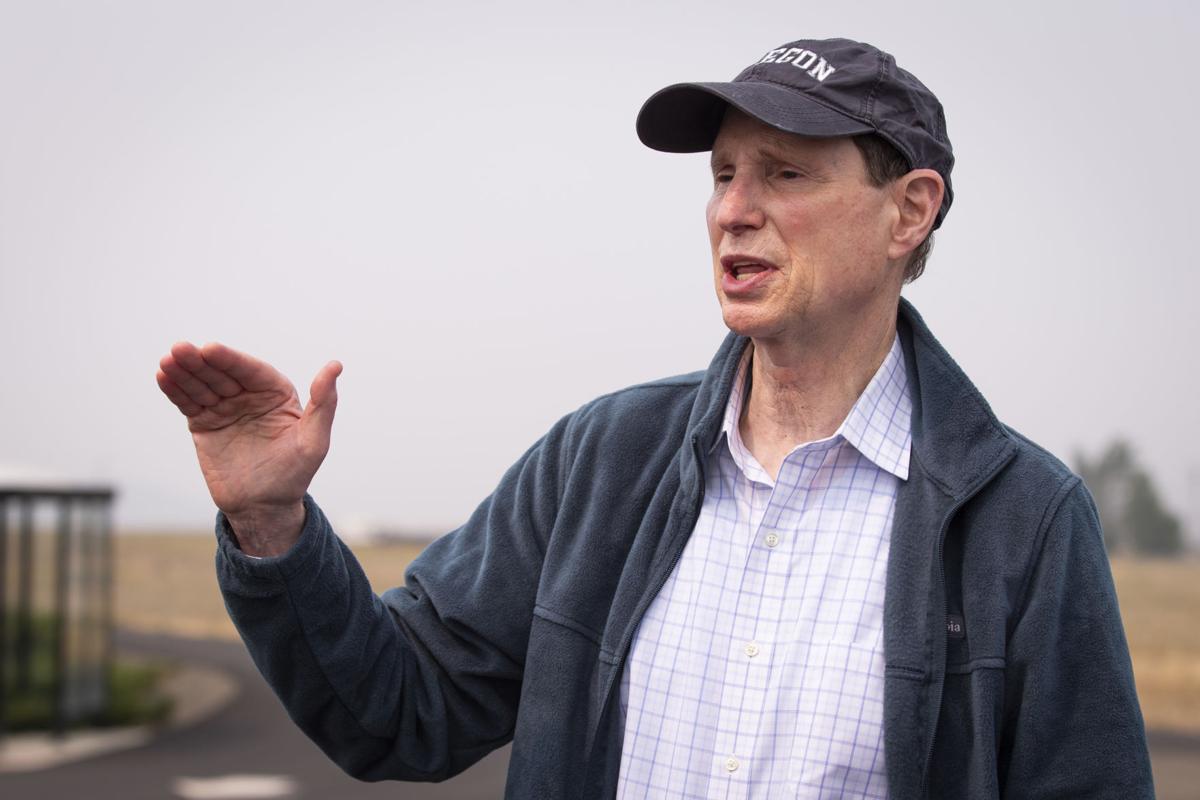 U.S. Sen. Ron Wyden speaks to media in Beatty on Aug. 19, after touring the area damaged by the Bootleg Fire. Wyden, D-Oregon, is running for another term and already has $6.3 million in the bank for the race.

Oregon State Rep. Christine Drazan, R-Canby, listens to testimony during the Joint Committee on Ways and Means Subcommittee on Education at the Capitol in Salem in 2019.

Tired of seeing surveys on articles? If you are a subscriber, simply log in or Subscribe now!
1 of 3

FILE - House Speaker Tina Kotek, D-Portland, announced last week recently that she is ready to drop her gavel and run for governor next year.

U.S. Sen. Ron Wyden speaks to media in Beatty on Aug. 19, after touring the area damaged by the Bootleg Fire. Wyden, D-Oregon, is running for another term and already has $6.3 million in the bank for the race.

Oregon State Rep. Christine Drazan, R-Canby, listens to testimony during the Joint Committee on Ways and Means Subcommittee on Education at the Capitol in Salem in 2019.

Ready or not, Oregon, the 2022 election season is here.

Labor Day weekend of odd-numbered years is the traditional kickoff of serious campaign activity aimed at the ballot voters will mark in 14 months.

If anything, 2021 is off to a running start. The busy summer needs a primer to catch up on what’s happened and what’s coming up that will have an impact on the ballot voters will see for the general election on Nov. 8, 2022.

• A wide-open governor’s race that for the first time in 20 years won’t feature an incumbent or former governor on the ballot. Gov. Kate Brown is barred from seeking a third consecutive term.

• A new open congressional seat — Oregon’s first in 40 years. With all five current U.S. House members from Oregon seeking re-election, the new district is a chance to join a club that rarely has vacancies.

• U.S. Sen. Ron Wyden, D-Oregon, is marking 40 years since he first came to Washington as a 31-year-old U.S. House member from Portland. He’s running for another term and already has $6.3 million in the bank for the race.

• New political topography in Oregon created by a legally required redrawing of lines for 96 House, Senate, and congressional seats might not be finalized until as late as January 2022.

• A slew of proposed initiatives, constitutional amendments, referendums and referrals working their way through the long process of qualifying for the November 2022 ballot.

Brown’s departure and redistricting have unleashed pent up ambition among politicians whose rise has been blocked by incumbents holding on to the top offices.

House Speaker Tina Kotek, D-Portland, announced last week recently that she is ready to drop her gavel and run for governor next year. Kotek has brought on veteran campaign advisor Thomas Wheatley, who performed the same role for Brown in her 2018 campaign.

Kotek is the state’s longest-serving House Speaker, having been chosen by colleagues in votes every two years since 2013.

Candidates cannot run simultaneously for two offices on the ballot. That’s a trouble spot for Kotek and an advantage for possible primary opponents like Treasurer Tobias Read and Attorney General Ellen Rosenblum.

If either of them run and lose, they go back to their old job. But a Kotek loss would leave her out of Oregon politics for the first time since she was first elected to the House in 2006.

No votes will have been cast by March 8, 2022, the final day to declare candidacy for office. Kotek will have to make a judgment call on how she is doing in the run-up to the primary more than two months later on May 20, 2022.

The deadline for her decision would come the latest day the Legislature can adjourn its 35-day session that begins in February.

Kotek’s departure from the House would set off a scramble for her job.

Rep. Janelle Bynum, D-Clackamas, mounted an unsuccessful coup in the caucus at the beginning of the last session in a bid to replace Kotek.

Bynum would likely try again — unless she decides to run for congress.

Bureau of Labor & Industries Commissioner Val Hoyle has denied rumors she is mulling a run for governor, saying she will run for re-election in 2022.

Rebound or relapse for Republicans

Republicans are fighting to remain viable as a statewide political force.

A Republican hasn’t been elected governor since Vic Atiyeh won a second term in 1982. Wyden and Oregon’s other senator, Jeff Merkley, are both Democrats, as are four of the five U.S. House members.

U.S. Rep. Cliff Bentz, R-Ontario, is in his first term in Congress and isn’t likely to run for governor.

Former U.S. Rep. Greg Walden, R-Hood River, who retired from Congress after two decades, is also out. Walden has consistently declined invitations from party leaders to help the GOP field a strong candidate for governor or senator.

Former U.S. Sen. Gordon Smith, R-Oregon, prefers the role of mentor and supporter of a select number of candidates to getting back into the political ring himself.

Along with a longshot bid for governor and a possible win in the reconfigured congressional map, GOP leaders hope legislative redistricting for the next decade that will go into effect with the 2022 election will open new opportunities to shift the balance of power in Salem.

Short of the long-term hope of returning to the majority, Drazan and others want to win enough seats so Democrats don’t have the 3/5ths margin in each chamber that allows them to pass taxes and other financial legislation without any Republican votes.

Though it seems like candidates have been running since the 2020 election ended 10 months ago, in reality, no one can officially run for state office until this Thursday, the first day the Secretary of State accepts candidate filings.

While no one is officially a candidate until later this week, the chance to start raising money started long ago.

Fundraising has started for nearly 100 candidates for offices ranging from city council to district attorney, legislator to the governor, and congress.

The Federal Elections Commission is already monitoring more than 21 campaign funds for the U.S. Senate and U.S. House seats in Oregon.

Another 75 political action committees for candidates have been created with the Oregon Secretary of State for local and state races.

U.S. heading toward a big vote next year

Nationwide, the November 2022 election will decide 35 U.S. Senate seats and all 435 U.S. House seats. Democrats hold a narrow majority in the House and a 50-50 tie in the Senate that can be broken by Vice-President Kamala Harris in some situations.

But historically, the party that won the presidency loses a significant number of seats in the first midterm election. Adding in the uncertainty of nationwide redistricting of congressional districts and Republicans are the odds-on favorites to capture both chambers on Capitol Hill.

Oregon’s labor commissioner job is among 229 other state executive offices up for election across 43 states in 2022, according to Ballotpedia, an election index website.

The money spigot has already started gushing. The Federal Elections Commission said candidates for the 435 U.S. House seats have already reported $348.7 million in contributions for the 2022 races. It’s a tight battle for campaign cash, with Democrats trailing Republicans by just under $2 million.

On the Senate side, $304.4 million has been raised by all candidates with Democrats holding a $27 million advantage as of the end of June.

If all of this seems premature, for candidates and political pros, it’s not.

There are 38 prospective ballot measures that have been submitted to the Oregon Secretary of State to attempt to qualify for the 2022 general election next November.

Voters could vote on allowing liquor to be sold in markets, criminal justice reform, penalties for lawmakers who refuse to attend legislative sessions, and the creation of a commission to handle redistricting, beginning with the 2032 election.

And there are likely more in the pipeline for future elections.

Initiative 1, would ask voters to amend the state constitution to require more bills passed by the legislature and signed by the governor to wait longer to become law.

The initiative was submitted in March 2019 — just four months after the 2018 general election. It was approved to begin circulating petitions in July 2020.

Whether or not supporters can gather 149,360 signatures in time to make the 2022 ballot won’t be known until later next year.

Then there were the words of Donald Trump during the ex-president’s appearance on a conservative radio show last week.

A hint of what “some more” might be — Iowa is the site of the first presidential caucuses for 2024.