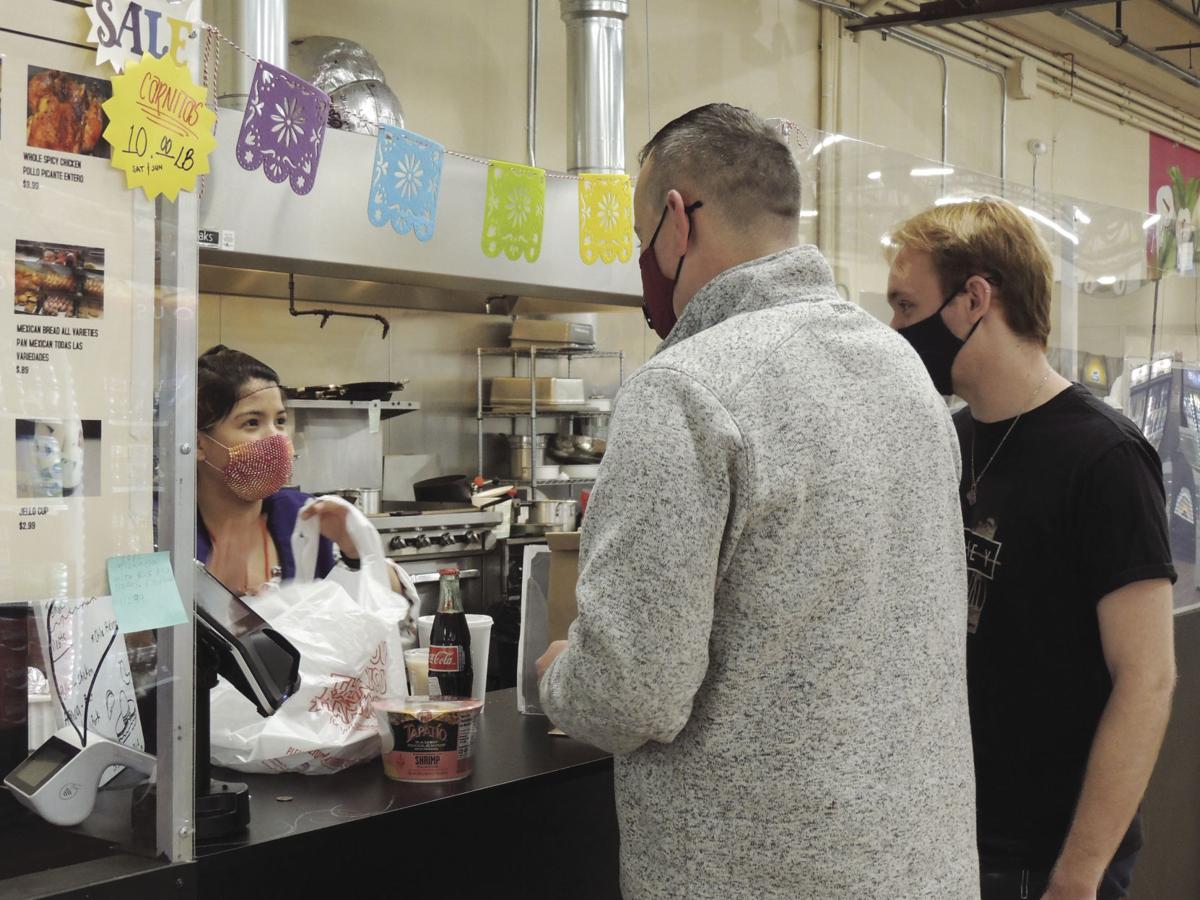 An employee at Casa Mexico on Washburn Way serves customers at their take-out counter on Friday. 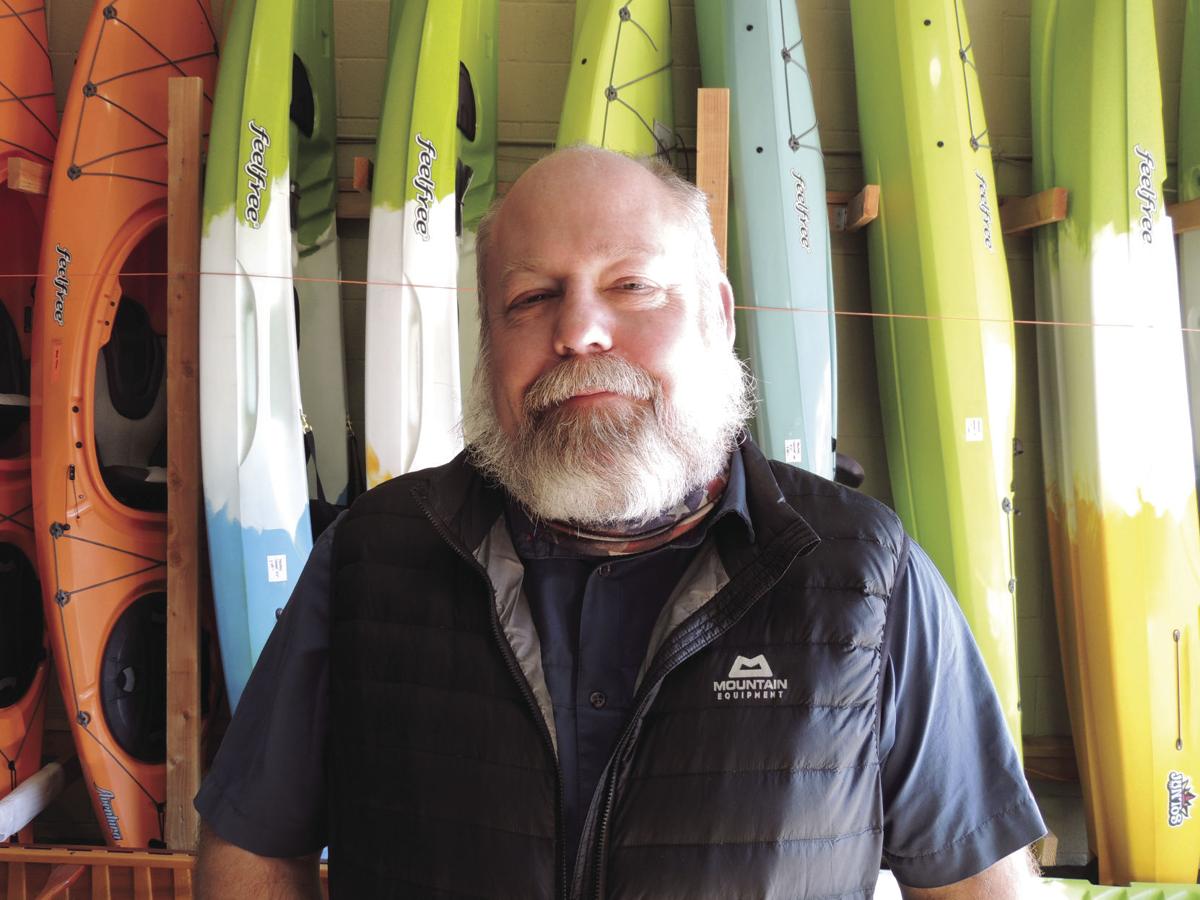 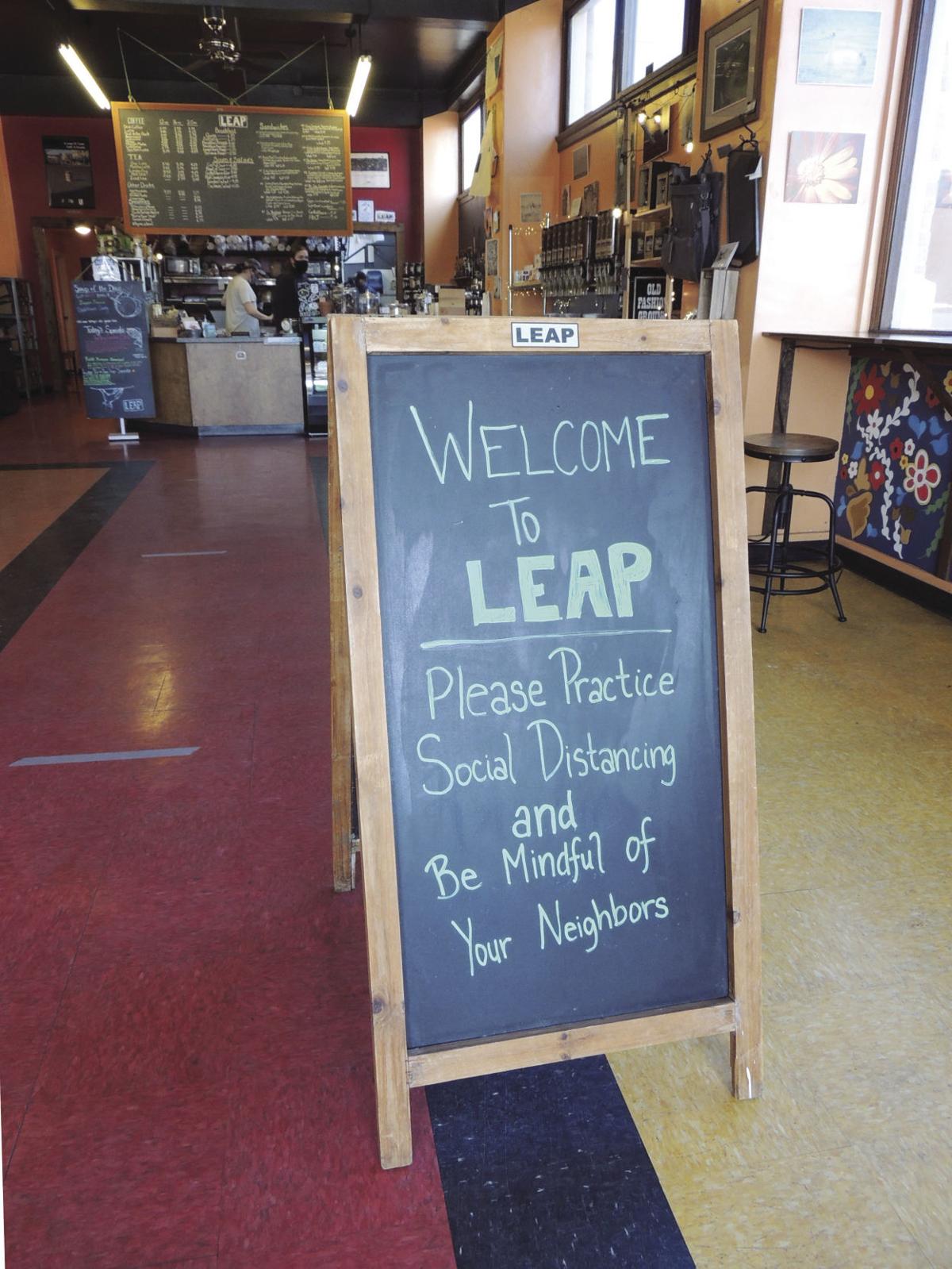 An easel at Leap of Taste in downtown Klamath Falls reminds people to social distance while waiting in line for sandwiches, coffee and other food and drink items. 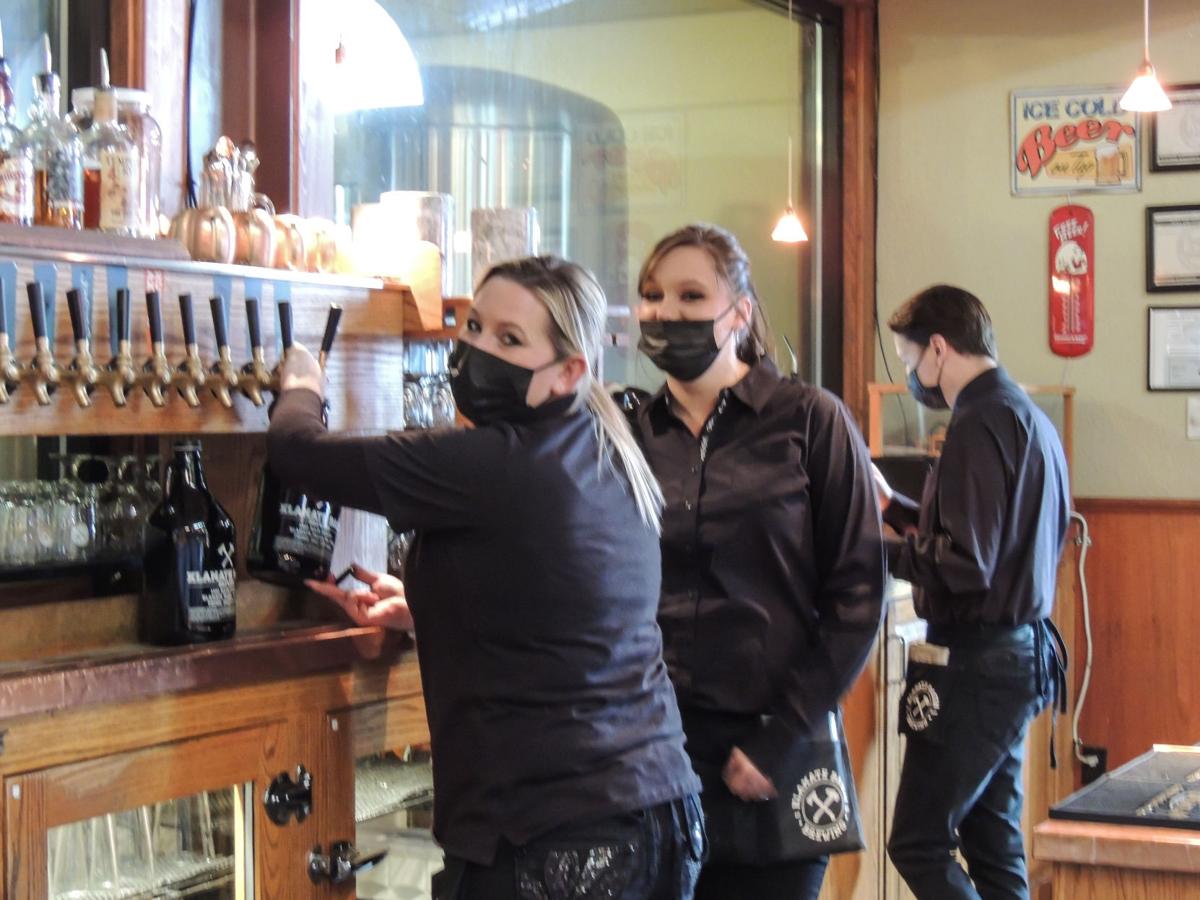 Christenna Coon fills a growler at Klamath Basin Brewing on the first day of reopened indoor dining in Klamath County. 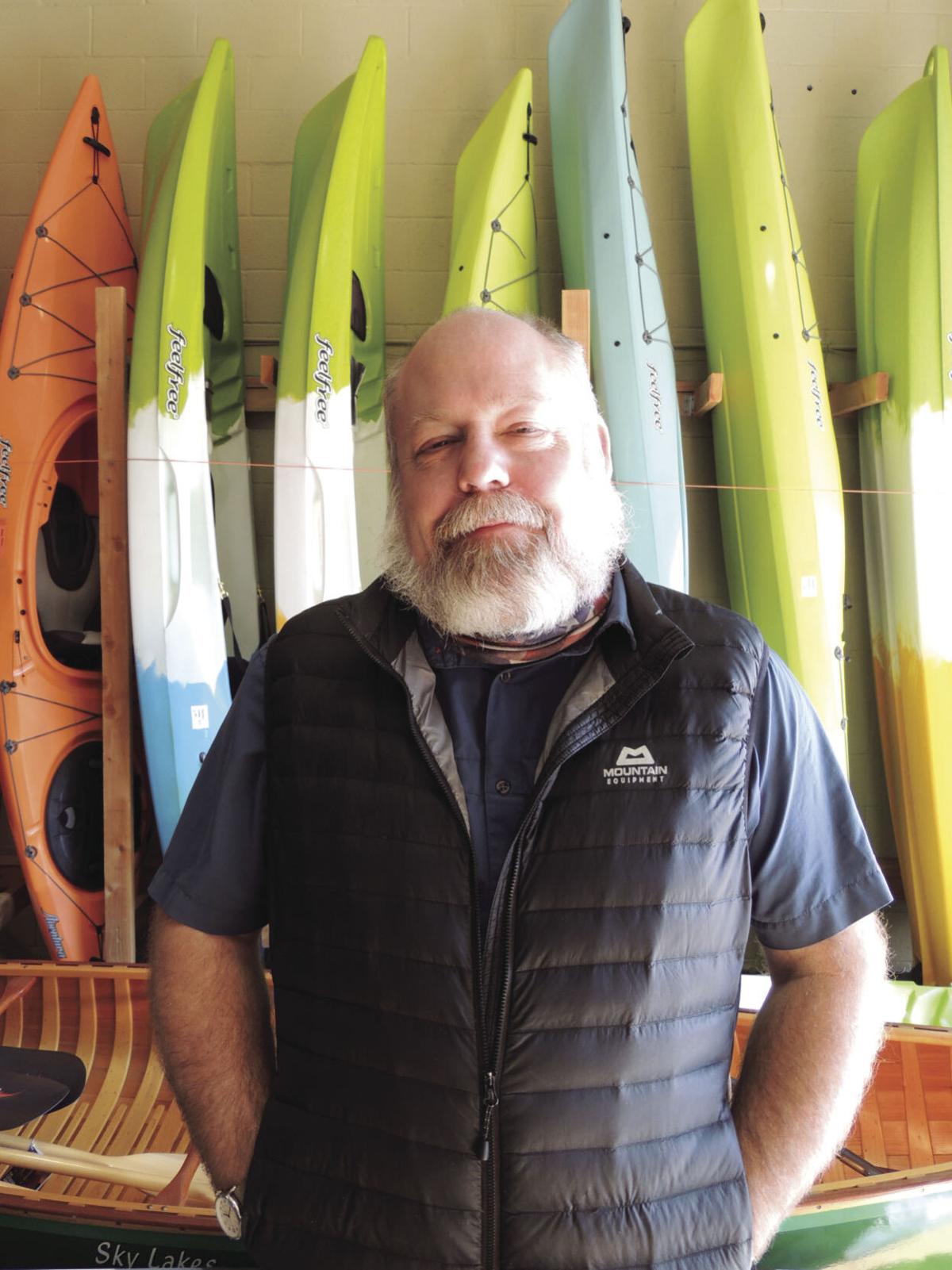 An employee at Casa Mexico on Washburn Way serves customers at their take-out counter on Friday.

An easel at Leap of Taste in downtown Klamath Falls reminds people to social distance while waiting in line for sandwiches, coffee and other food and drink items.

Christenna Coon fills a growler at Klamath Basin Brewing on the first day of reopened indoor dining in Klamath County.

Creativity was the name of the game for businesses over the past year, as they fought to survive what was billed as a temporary economic recession that would help save lives from a deadly virus.

But now, more than a year since COVID-related closures were enacted, some business owners fear that that the economic impact will be anything but temporary.

In March 2020, with fewer than 100 cases of COVID-19 in the state, Oregon’s economy came to a grinding halt. Unemployment skyrocketed into the double digits and restrictions meant to curb the ballooning spread of the virus rendered some business models obsolete — from downtown Portland to the wide expanses of the Klamath Basin.

With Governor Kate Brown’s “Stay Home, Save Lives” executive order, restaurants could not offer dine-in meals, entertainment venues were closed completely, and retail operations had to limit the number of customers in their store. All of this was attached to the idea that the closures were necessary for a couple of weeks, which then bled into a couple months. Emergency orders and “lockdowns” across the country that were initially written to last 60 days have since been extended for more than a year.

Despite the unpredictability, most Klamath County business have survived the pandemic. But business owners and area officials know we’re not out of the woods yet.

Klamath County Chamber of Commerce Director Heather Tramp said that although this past year was challenging, she’s concerned for many local businesses in 2021. Many will have to begin paying back the lifesaving emergency loans granted in 2020.

“I’m actually more worried about this year than last year as all of the loans come due, as the ramifications of rent moratoriums and not paying bills comes through,” she said “As this goes on, it gets harder and harder. People have exhausted their savings. A lot of our small businesses, their personal assets are intertwined with their business assets, and so as it goes on, it has been harder to make various payments that they’ve had. And that puts their lives — the stuff in their lives — at risk.”

According to Klamath IDEA, an entrepreneurship nonprofit, Klamath County businesses received more than $89 million in CARES funding in 2020. Some of that funding includes grants that do not have to be repaid. But there are still plenty of loans, like the federal Economic Injury Disaster Loan, for businesses that were losing revenue during the pandemic, and the Paycheck Protection Program, which incentivized businesses to keep people employed. Lake County businesses received nearly $13 million of COVID-relief funding.

Mike Angeli, owner of The Ledge, saw highs and lows of 2020 at his independent outdoors store in downtown Klamath Falls.

While he experienced a rush on his products like kayaks and hiking supplies, supply chain backlogs caused him to go weeks or more without being able to restock the shelves.

“You saw hiking, camping and outdoor sports blew up,” he said. “I’ve been doing this for 36 years, and it’s the most (interest) I’ve ever seen, tenfold, in 36 years ... its become overwhelming with the amount of stuff that people wanted instantaneously.”

Once he saw the cleaning regimen he’d have to implement at his rock climbing gym next door, he decided to focus his time and dollars on the store. The gym was already struggling before COVID-19 hit, and he did not have to lay anyone off.

Businesses got creative in the past year to make ends meet, in spite of restrictions that limited sectors of businesses. From curbside service to delivery to an overhaul of the business model, Angeli wasn’t the only one to shake up his operations to stay afloat.

Due to the unpredictability of shipments, he changed the way he buys his inventory. He expects to have to do this for the next few years as the pandemic continues to rise and fall across the world.

“I got ahead of that as best as possible, as much as I could afford, and warehoused and stockpiled as much of that — to meet customer demand,” he said. “But the demand still exceeded what I had. And I was ahead of a lot of people in my industry because I planned.”

If there were industries that saw a boost in business during the pandemic, Tramp estimated it was home improvement stores, outdoor outfitters and gardening stores.

While the slow reopening process is underway, increased capacities at many retail businesses has been well received. However, Tramp said a limited reopening taking effect with just a few days notice created staffing problems for some Klamath County businesses. She noted that school schedules and daycare availability impact staffing and bottom lines as well.

Klamath County’s unemployment rate is still struggling to rebound after the sharp spike in spring 2020. According to the state employment department, the county has recovered about 50% of the 2,730 jobs lost last spring, which means about half of them have yet to be refilled. The industries hit the hardest over the last year were leisure and hospitality, education, health services and manufacturing. In Klamath County, leisure and hospitality reported losing 660 jobs over the last year and 220 jobs were lost in public education.

Some industries have already rebounded, however. In December 2020, the Klamath County construction industry was up 160 jobs compared to year prior.

Neighboring Lake County’s unemployment rate is nearly even with last January’s rate of 4.5%. South Central Oregon Regional Economist Damon Runberg noted in his employment report that “Lake County remains one of the least impacted communities from COVID-19 related layoffs with employment levels down only 2.2% from last January.”

The statewide unemployment rate is 6.1% for February 2021 and the state has recovered 46% of the jobs lost when the COVID-19 recession hit in April 2020, according to the Oregon Employment Department.

Still, he said last spring’s dire predictions that one in four businesses would close during the pandemic did not come to pass, especially in Klamath County.

Although a handful of downtown businesses shuttered over the last year, others popped up in their place, filling storefronts that have been empty for years. Rutledge pointed to the way the pandemic fostered a sense of entrepreneurial spirit and pushed business owners and laborers to find ways to make ends meet.

He said that so far, Klamath County is on pace to create even more businesses in 2021. He partly attributed that to a difference in attitude in 2021, compared to tough times that came before.

“This feels more temporary (to many) than the economic turmoil of 2008,” he said.

Area officials said that a majority of businesses closed permanently during the pandemic had been struggling since before the virus arrived, and that COVID accelerated closures that were likely already on the way.

Tramp was impressed with the way the community stepped up when COVID-19-related restrictions first impeded businesses. She noticed a big emphasis on shopping and eating local — and that had immediate impacts. She knows, however, that a year later that energy can wear off.

Klamoya Casino closed its doors for months at a time as COVID-19 cases increased in the area. General Manager Joseph Quiroli noted that even when the casino was open, it saw far less traffic through the casino. He attributed most of that to family budgets being much tighter this year and a decrease in international visitors to the area for nearby sights like Crater Lake National Park.

“If you have some of those basic needs that aren’t being met, then you’re not likely to go out and do things,” Quiroli said. “Folks are worried about their next paycheck, they’re worried about paying the rent. Their discretionary dollars are not really available.”

At the Crater Lake Junction Travel Center, general manager Michael Thompson said business was a wash over the past year. Tourism in the area was down, including to Crater Lake. However, trucking traffic through the area was up, he said.

The Travel Center remained open most of the past year, except for a couple of 24-hour closures after confirmed positive tests from employees. Thompson said at the request of the federal government, they remained as operational as often as possible to serve freight traffic and keep their shelves stocked.

Thompson noted the challenge over the past year as many customers refused to wear masks or threatened employees who were just doing their jobs and trying to follow the rules.

Another unfortunate circumstance that boosted business at the travel center was the Two Four Two Fire, which sparked about 10 miles north of the travel center. The casino and hotel served as the Red Cross emergency site, which increased businesses but also stressed their operations.

Tramp noted, looking toward the summer of 2021, that although the emergency business loans have been a lifeline for many to keep the lights on, there’s still a lot to figure out on the state and federal levels in terms of how relief is allocated and received.

While Tramp said she hears every day about how people are tired of the lifestyle changes caused by the virus, she urges people to remain kind to servers, cashiers and other employees who are doing their jobs and trying to make a living.

Angeli said that the pandemic has reminded him of the importance of connecting with those around him, especially his customers.