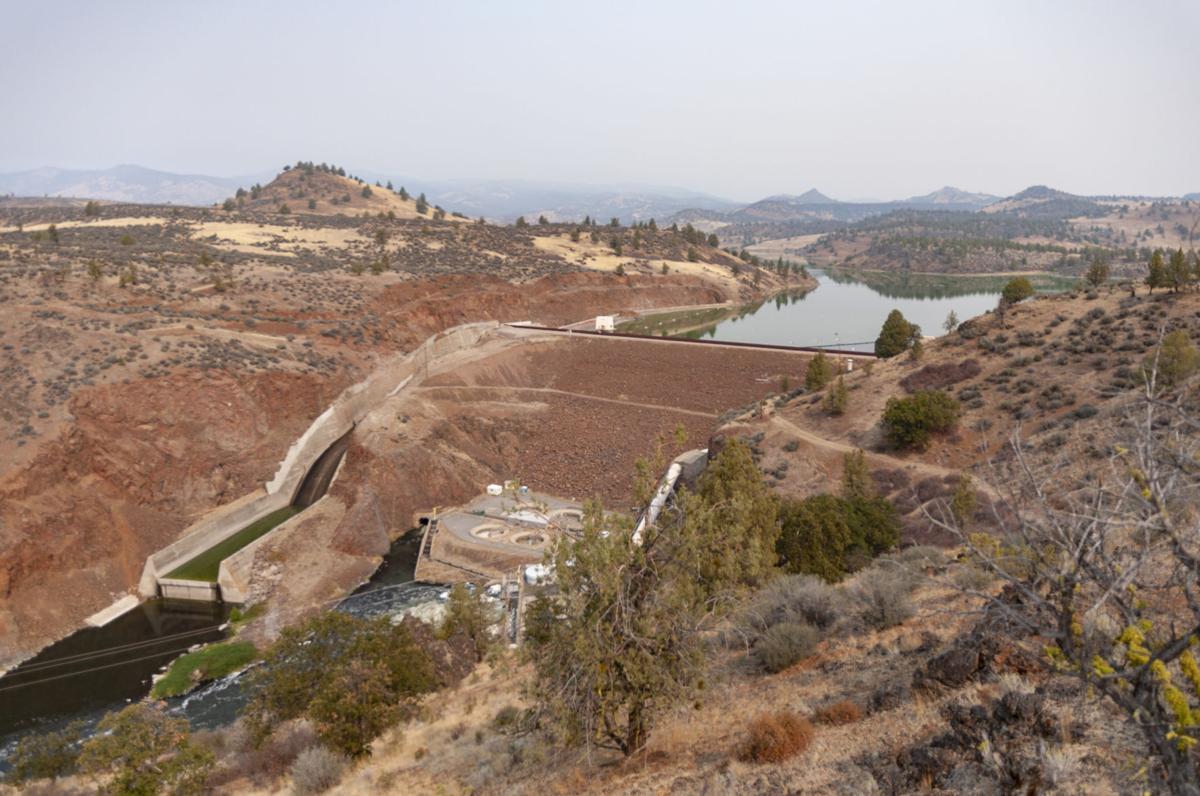 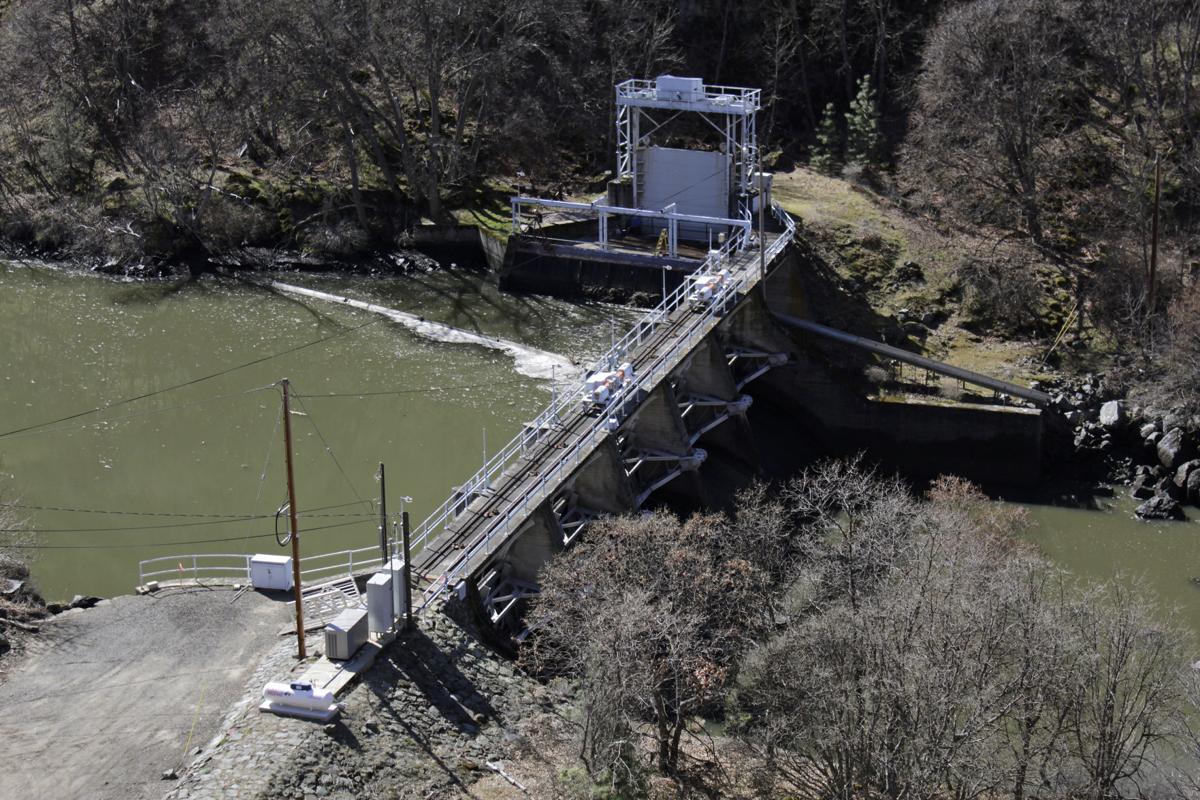 ABOVE: In this March 3 file photo, a dam on the Lower Klamath River known as Copco 2 is seen near Hornbrook, Calif. BELOW: Iron Gate Dam on the Klamath River. It and three other dams obstruct the river’s natural flow and form reservoirs that concentrate toxic algae, drastically reducing salmon populations. 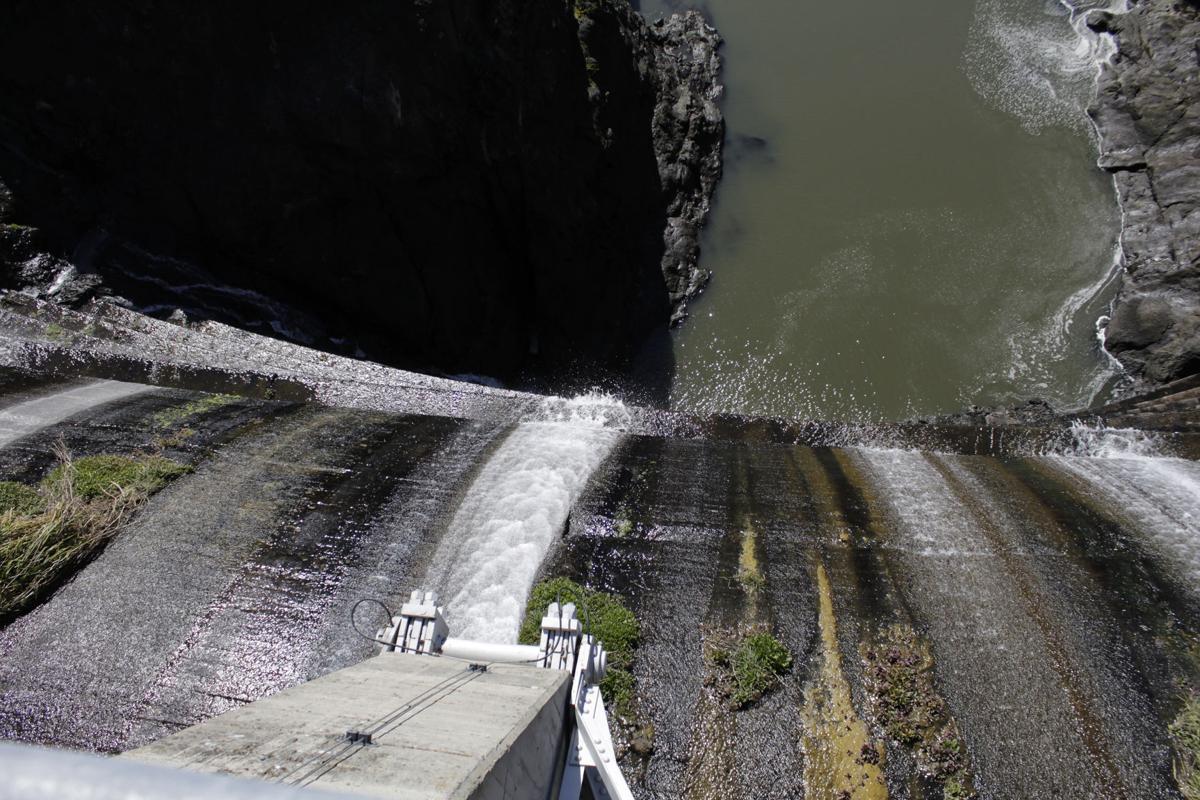 In this March 3, 2020 file photo, excess water spills over the top of a dam on the Lower Klamath River known as Copco 1 near Hornbrook, Calif. 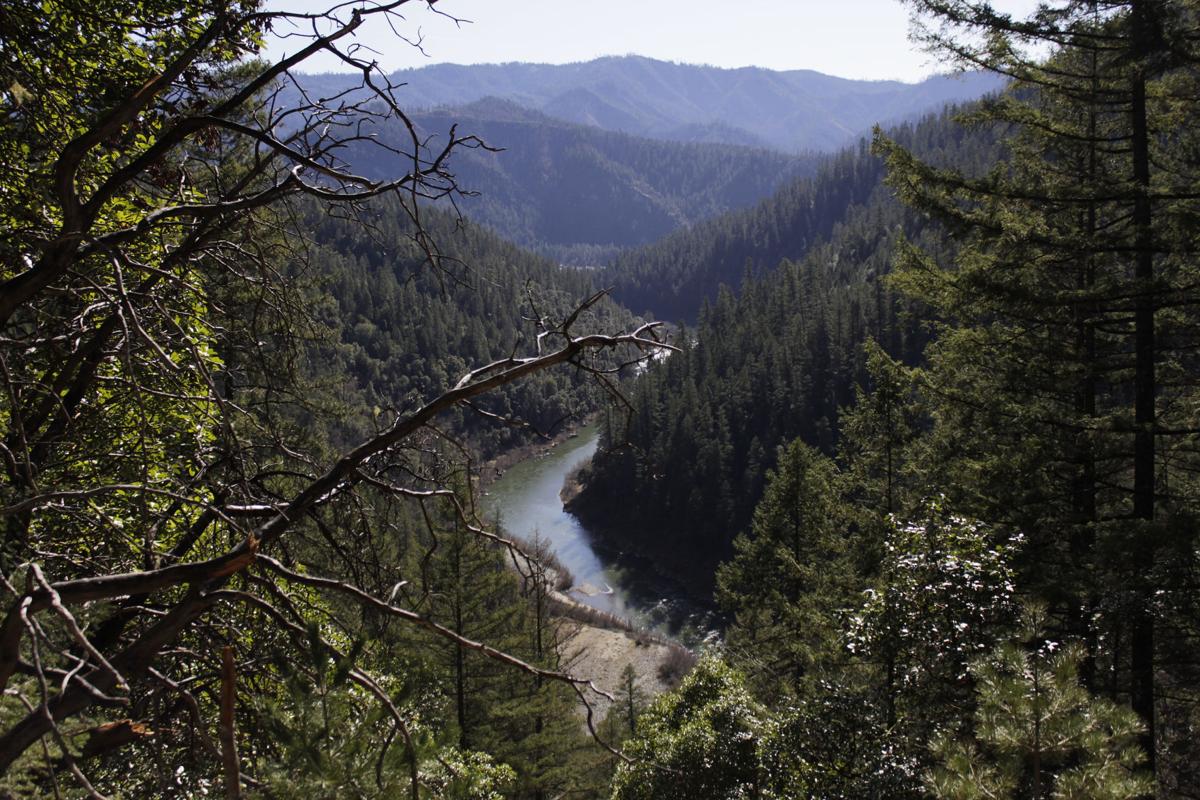 In this March 3 file photo, the Klamath River is seen flowing across northern California from atop Cade Mountain in the Klamath National Forest.

After four months of negotiations and uncertainty, the largest dam removal effort in U.S. history is again moving forward.

Signatories to the Klamath Hydroelectric Settlement Agreement announced Tuesday that they have devised a way forward following a regulatory curveball thrown at the project this summer. The virtual gathering was an affirmation of all parties’ commitments to see the agreement through.

“Reaching this important milestone would not be possible without the many tribal people who have dedicated their lives to restoring the river,” said Joseph James, chairman of the Yurok Tribe.

In this March 3 file photo, the Klamath River is seen flowing across northern California from atop Cade Mountain in the Klamath National Forest.

The Yurok Tribe, the Karuk Tribe, PacifiCorp, the Klamath River Renewal Corporation and the states of California and Oregon have signed a Memorandum of Agreement outlining the next steps they’ll take to fulfill the KHSA — namely providing extra contingency funds for the project and changing who will be on the dam licenses. Signatories will file new applications to transfer and surrender the dam licenses in the coming months, and the actual removal and restoration efforts is expected to begin in 2023.

Currently, PacifiCorp owns four dams on the Klamath River that cut off hundreds of miles of salmon spawning habitat and contribute to high fish disease rates and toxic algae blooms in what used to be the third most important salmon-bearing watershed in the Pacific Northwest. Downriver tribes and fishing communities have been fighting for decades to remove the dams and restore salmon runs.

The KHSA would transfer the license to operate the dams from PacifiCorp to a dam removal entity, the Klamath River Renewal Corporation, which would carry out the removal of the dams and restore the river along the stretch that includes them. PacifiCorp would raise $200 million through a surcharge on its ratepayers in Oregon and California to help pay for the removal, and California would provide an additional $250 million in water project bonds. PacifiCorp representatives said the full license transfer was key to ensuring the utility would not accrue any more costs associated with the removal beyond the $200 million.

In July, the Federal Energy Regulatory Commission reviewed the company’s application to transfer the license to KRRC and determined that a partial license transfer was necessary, arguing that PacifiCorp had experience with dam removal and needed to remain partially liable for the project. The utility said that went against one of the core tenets of the KHSA (keeping PacifiCorp off the hook for unforeseen additional costs associated with the removal) and brought signatories back to the negotiation table to determine a path forward.

During the months of uncertainty that followed the FERC decision, tribes sent letters and staged actions to persuade Warren Buffett, Chairman of PacifiCorp parent company Berkshire Hathaway, to uphold the agreement. It seems to have worked.

“I recognize the importance of Klamath dam removal and river restoration for tribal people in the Klamath Basin,” Buffett said. “We appreciate and respect our tribal partners for their collaboration in forging an agreement that delivers an exceptional outcome for the river, as well as future generations. Working together from this historic moment, we can complete the project and remove these dams.”

In the coming weeks, PacifiCorp will file a new application with FERC to transfer the dam license to California, Oregon and KRRC. Signatories believe that replacing PacifiCorp with the states (California has added itself to energy project licenses before) will satisfy FERC’s requirement that another entity remain on the license with KRRC.

“Adding the states as co-licensees provides assurances that the project will have sufficient financial backing while honoring settlement terms that stipulate PacifiCorp would not be a co-licensee for removal,” according to a news release from the signatories.

NEPA analysis up next

PacifiCorp and KRRC will file an amended license surrender application today, explaining that the transfer application is coming in the next few weeks. The hope is that FERC will issue a draft surrender order, which will outline how National Environmental Policy Act standards will apply to the project. KRRC will spend most of 2021 navigating through that NEPA analysis and the public comment periods associated with it. The release said KRRC expects to begin the actual project in 2022, removing the dams by 2023 and continuing with years of river restoration afterwards.

“This is not a backup plan,” said Brian J. Johnson, California Director for Trout Unlimited. “This is a better version of the plan.”

KRRC has ensured that the $450 million will cover any unexpected costs associated with the removal. But in the event that costs exceed that, the two states and PacifiCorp have each pledged an additional $15 million to the project’s funds. Any costs beyond that will be split evenly by Oregon, California and PacifiCorp. The extra cash nearly doubles contingency funds already built into the $450 million.

It’s unclear where exactly the additional money will come from, though it’s likely that the same California water bond that contributed $250 million to the project will also cover that state’s portion. PacifiCorp may add another customer surcharge to raise their share, which public utility commissions in both states have indicated is more cost-effective for ratepayers than a much more expensive retrofit of the dams, which the company would have to pursue if the KHSA falls through.

Politicians in Klamath County brought up concerns with how Oregon will pay for its share, arguing that Governor Brown has no authority to spend state money on the project.

“This is another saga in the latest batch of Governor Kate Brown’s unconstitutional power grabs,” said State Senator Dennis Linthicum. “Brown continually brokers high-stakes, dark-of-night deals without public or legislative input. Oregon’s taxpayers will be on the hook for millions if this imprudent cronyism is allowed to stand.”

Oregon’s Senators Jeff Merkley and Ron Wyden said they were glad to see the states step up to support the agreement.

“Oregon and California have made the best of a bad situation forced upon the two states when FERC upset the Klamath Hydroelectric Settlement Agreement dam removal process with an unexpected and unwelcome ruling last summer,” the senators said.

Tribes praised the new agreement, emphasizing that dam removal will help restore the river they’ve lived with since time immemorial.

“We are more confident than ever that future generations of Karuk will enjoy the benefits of a healthy Klamath River just as their ancestors did dating back to the beginning of time,” said Karuk Tribal Chair Buster Attebery. “This moment is a testament to years of devotion and hard work by the community of activists representing all Tribes on the river who have never tired of demanding justice for their communities.”

The Klamath Tribes, who are not KHSA signatories, support dam removal because it will allow salmon to reach Upper Klamath Lake and its tributaries, which they naturally traveled to for spawning before the dams were built.

“Salmon and steelhead once provided sustenance for our people and were an integral part of our culture and lifeways which helped us survive through the ages, but for over a century the dams have prevented them from reaching our homelands,” said Klamath Tribal Chairman Don Gentry.

Regulatory filings will begin immediately and the technical plan for the removal is virtually complete; now it’s only a matter of when FERC approves the new license transfer scheme. Even if they run into more hurdles, KHSA signatories have clearly emphasized that, when it comes to Klamath dam removal, they’re all in.

“At its heart, dam removal is about healing and restoration for the river, for the salmon, and for our people,” said James, the Yurok Tribe’s chairman. “Although we are excited to be moving forward again, we want to emphasize that the Yurok Tribe will never rest until the dams are out and the river is healed.”