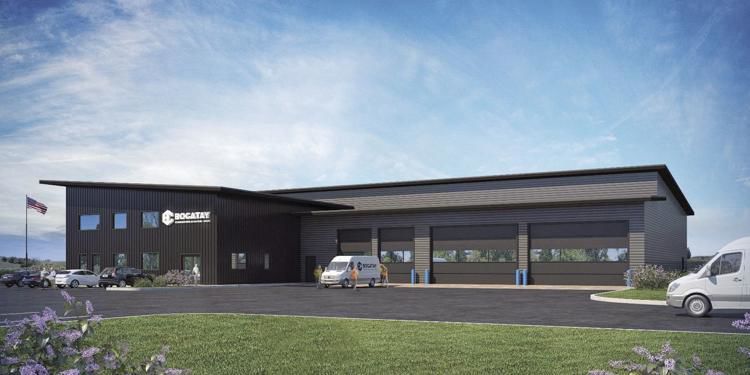 Bogatay Construction will use land in the Tech Hills development near Oregon Institute of Technology to develop new operations divisions.

A rendering of what the Fairfield Inn at Timbermill Shores will look like when completed.

Bogatay Construction will use land in the Tech Hills development near Oregon Institute of Technology to develop new operations divisions.

A rendering of what the Fairfield Inn at Timbermill Shores will look like when completed.

Walls are going up and roofs are going down on two construction projects currently underway in Klamath Falls.

The Fairfield Inn is still slated to open in mid-June 2020, catching up after inclement weather led to some delays.

The hotel will be a 92-room Fairfield Inn & Suites by Marriott at TimberMill Shores, located off Klamath Avenue, near Veterans Memorial Park, in downtown Klamath Falls.

The construction crew is laying down the roof on the project now, and plumbing and electric installation will begin next.

The Inn is recruiting for a general manager position, and that person will work on-site with the construction team. In total, the Inn will employ 22 to 25 people, according to past H&N reporting.

Bogatay construction is also on schedule for its new operations division headquarters on Venture Way in Tech Hills near Dan O’Brien Way, which is expected to open in May.

All the structural steel is in place and work has begun on siding and roofing.

Gordmans, the clothing store that will replace Bealls at the Klamath Falls Town Center, is expected to open on March 17, according to a press release.

The store is hiring a variety of full-time, part-time and temporary positions, including sales associate, stockroom associate and more.

Gordman’s is another store under Stage, the same umbrella company as Bealls. The store is at 1851 Avalon St.