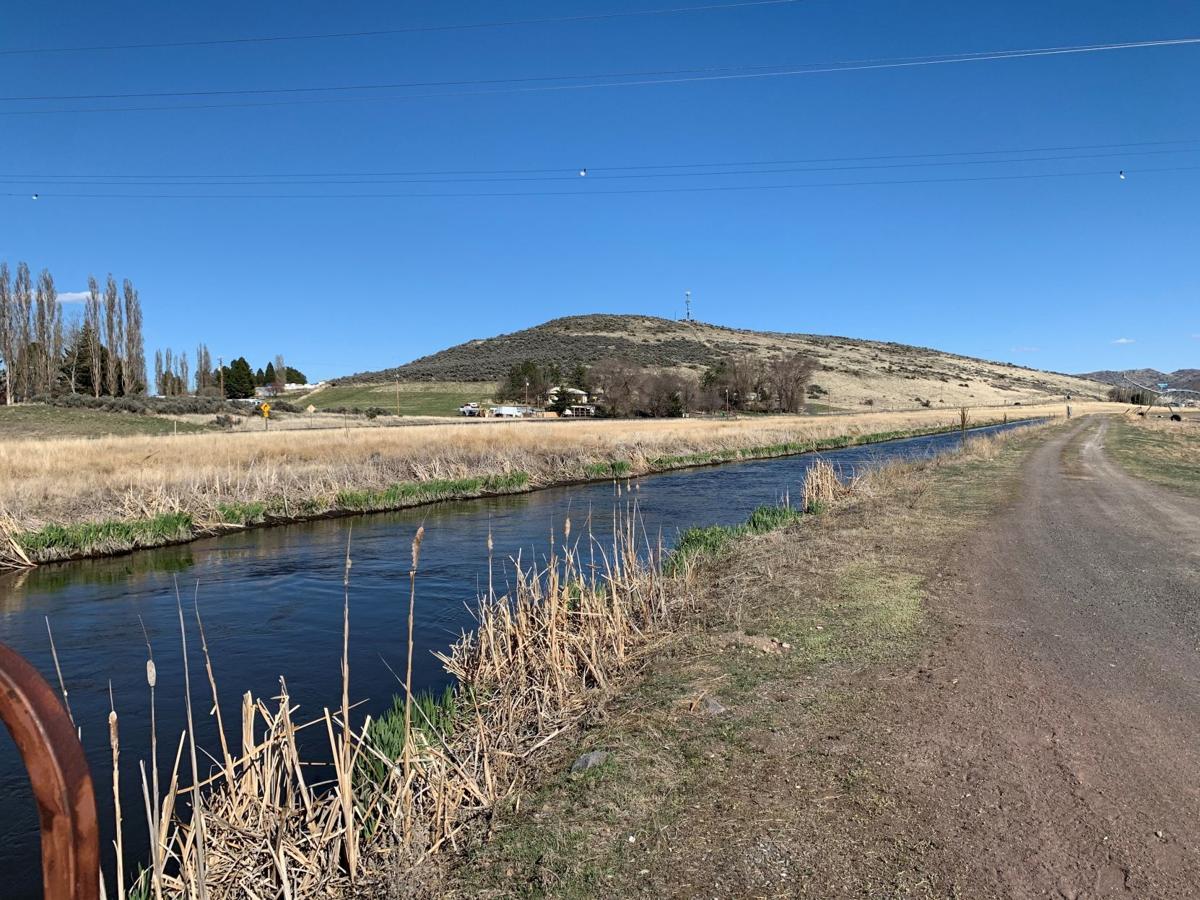 The North Canal is filled with water April 16 after the Klamath Drainage District opened its headgates the day prior, against orders of the Bureau of Reclamation. 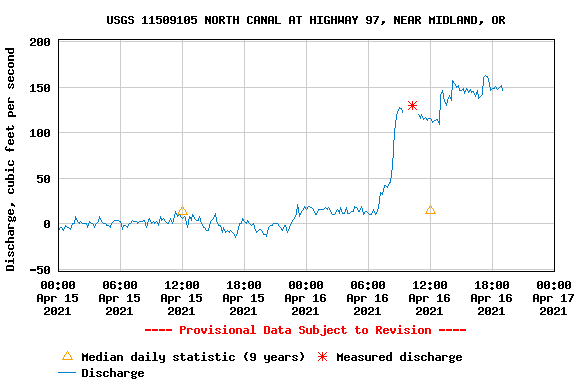 The USGS streamflow gauge for the North Canal at Highway 97, April 15-16. 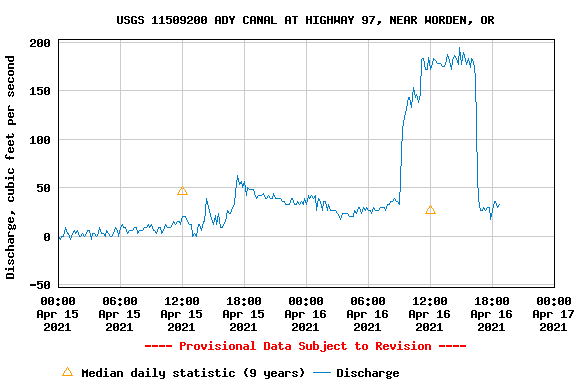 The USGS streamflow gauge for the Ady Canal at Highway 97, April 15-16.

The Klamath Drainage District began deliveries of water Thursday night after its board voted to operate under a state permit, the legality of which is in question.

According to a news release from KDD, the district acquired the permit from the Oregon Water Resources Department in 1977 for the use of live flow from the Klamath River for irrigation.

The supplemental water right has historically been treated as independent from “Project” water, according to the district.

As of 7 p.m. Friday, 32.4 cubic feet per second of water was running through the Ady Canal and 145 CFS through the North Canal.

On Wednesday, the Bureau of Reclamation informed Klamath Project irrigators that Project water would not be available until May 15.

In contrast, OWRD recently determined that water is available at KDD’s headgates for diversion, according to the release.

“We recognize the drought situation, but we could not wait another day,” said Jason Flowers, KDD’s president. “The biological opinion limited our ability to adequately raise the soil moisture profile in the offseason, so we are already running behind. After learning there is no Project water available, we now know the source of water we have to use.”

In addition to the lack of preseason water, the release said the dry and windy spring has begun eroding the soils on the district and producing dust storms.

“We’ve been waiting for precipitation and it just hasn’t come,” said Scott White, general manager of KDD. “The dust has been unbearable out here.”

The release said the decision to exercise the District’s permit was not taken lightly by the board, and the board stressed to management that every drop be used as effectively and responsibly as possible.

White said he intends to work closely with the Bureau, other districts and all other stakeholders as much as possible to help with the management of this water year.

“We want to be as transparent as possible and understand that knowing what we do helps in making key management decisions,” White said.

Bottcher cited an email from KDD Counsel Reagan Desmond earlier this week, which argued that the district has the authority to make irrigation deliveries not through the Klamath Project but through its 1977 state permit.

“No authority is cited for this position other than a general reference to Oregon water law and Reclamation law,” Bottcher wrote. “Reclamation’s position is that there is no water currently available for diversion from the Klamath River under the District’s 1977 state permit.”

Bottcher wrote that Reclamation’s contract with KDD binds the district to comply with the Bureau’s operating procedures, and that water taken from the Klamath River inconsistent with those procedures is not covered by the Incidental Take Statement pursuant to the Endangered Species Act. It will also count against the total 33,000 acre-feet allocated to the Project.

“KDD’s diversion of water into the Ady and North Canals is contrary to the ESA and may subject KDD to legal action if it does not immediately cease diversions,” Bottcher wrote. “The fact that KDD is claiming to use a junior 1977 water right under state law does not overcome Reclamation’s legal authority and obligations under federal law.”

The letter said Reclamation values its relationship with KDD and hopes to work with the district to identify a solution, but that it will take action if KDD does not cease water deliveries.

“If KDD does not cease all diversions at the Ady and North canals as soon operationally feasible, in due course (1) Reclamation staff will access Reclamation-owned property to close the gates to the Ady Canal, (2) water users within the KDD boundary may not be eligible for Drought Relief Act funds, and (3) the United States may take other legal action against KDD and its members.”