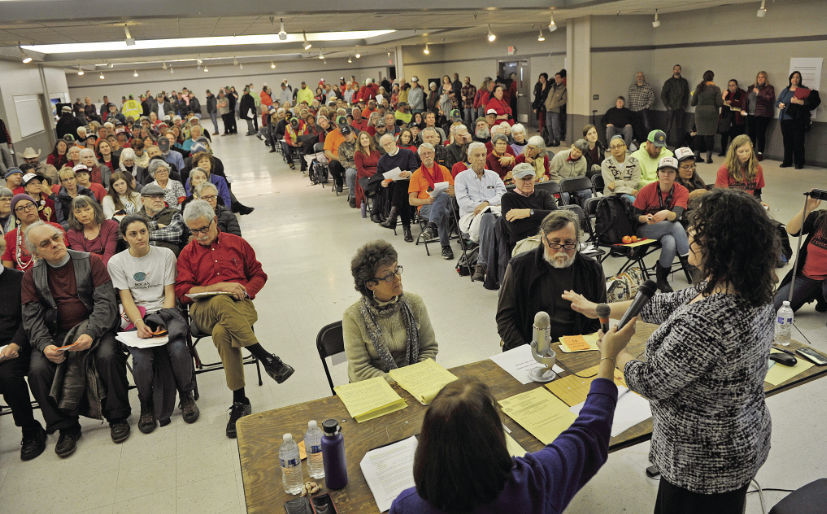 A public hearing concerning the Jordan Cove Pipeline was held at the Jackson County Expo earlier this year that drew hundreds. 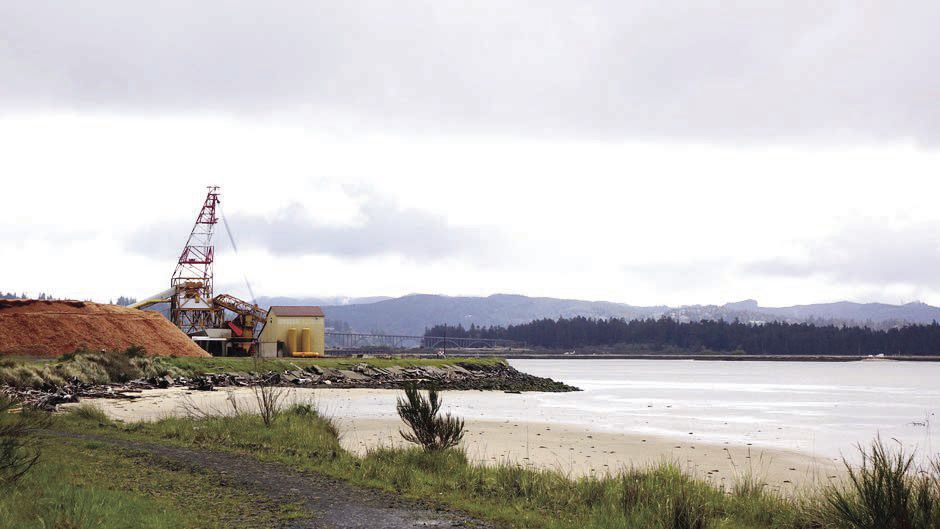 View of Coos Bay from spot where Jordan Cove LNG terminal ship will be excavated, if approved by regulators. 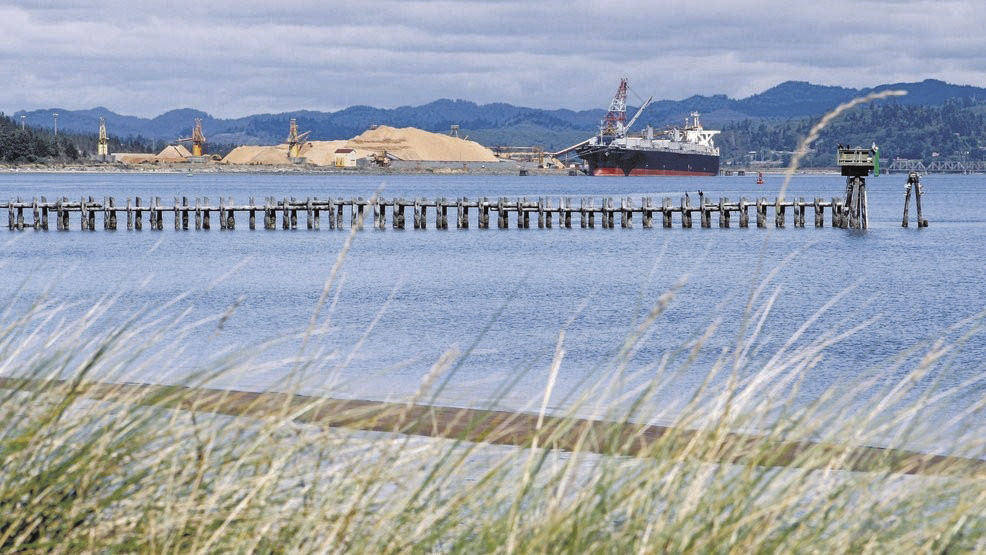 A ship loads wood chips from Roseburg Forestry in Coos Bay near the proposed site of the Jordan Cove liquid natural gas terminal. 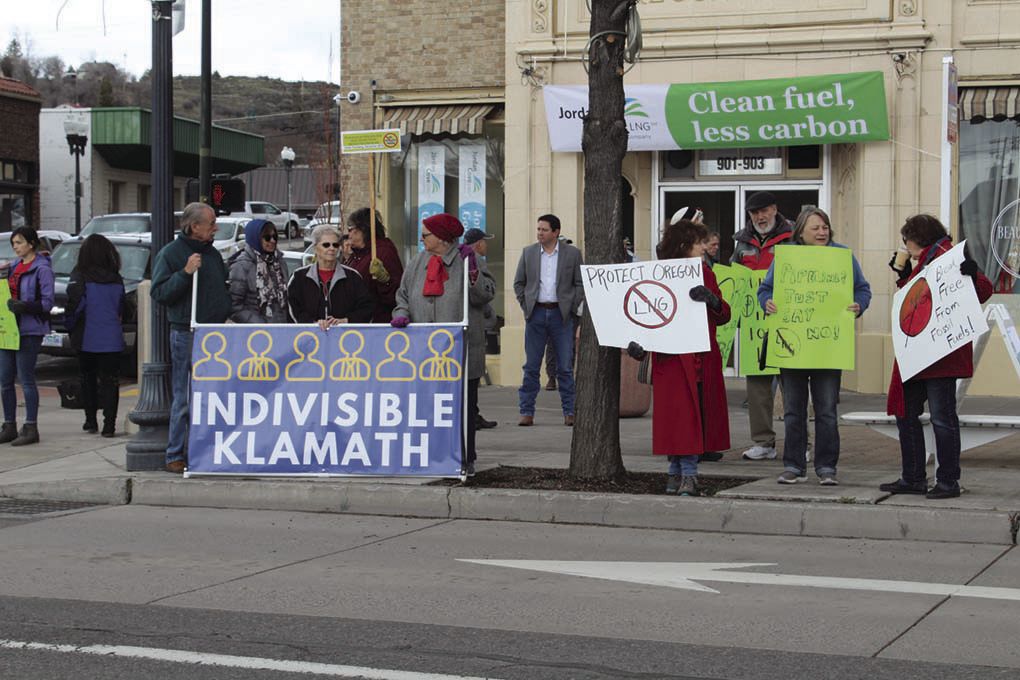 About 35 people turned out on a blustery Thursday afternoon to rally in front of the Jordan Cove offices in downtown Klamath Falls last winter.

A public hearing concerning the Jordan Cove Pipeline was held at the Jackson County Expo earlier this year that drew hundreds.

View of Coos Bay from spot where Jordan Cove LNG terminal ship will be excavated, if approved by regulators.

A ship loads wood chips from Roseburg Forestry in Coos Bay near the proposed site of the Jordan Cove liquid natural gas terminal.

About 35 people turned out on a blustery Thursday afternoon to rally in front of the Jordan Cove offices in downtown Klamath Falls last winter.

As the Federal Energy Regulatory Commission prepares to hold public hearings on the Jordan Cove Project, the company released an economic analysis of the pipeline that is to run across four Southern Oregon counties, including Klamath County, which could see $5.3 million in new tax revenue annually.

The analysis was conducted by ECONorthwest of Portland. (See related story).

“What is the same and true across all four counties is that Jordan Cove will become the highest taxpayer in all four project counties: Jackson, Douglas, Klamath and Coos,” according to a press release from the company.

Jordan Cove, and its parent firm, Pembina of Calgary, Canada, is proposing to build a 230-mile, 32-inch natural gas pipeline from a new compressor station in Malin to Coos Bay where the gas will be converted to liquid natural gas and shipped overseas.

It is a $6.5 billion project, with labor income pegged at $2.3 billion and annual expected employment across the project at 7,000 workers.

One of four public hearings on the draft Environmental Impact Statement before FERC will be June 27 from 1 p.m. to 8 p.m. in the Klamath County Fairgrounds event center.

The analysis focuses on jobs, payroll, tax revenue, economic multipliers and more, on a county-by-county basis. There is also a section on the tribal economic impacts.

Klamath County has the highest unemployment of the four counties at 6.9%, the report said.

“An example of how pipelines stimulate economic growth was seen with the Ruby Pipeline, a section of which was built in 2011, and added $3.1 million in revenue for Lake County and $1.5 million for Klamath County.

“Lake County used some of the property taxes from the pipeline to finish construction of the Lakeview Library — a project long stalled because of a lack of funding,” the report noted.

Meanwhile, 35 environmental groups that are in opposition to the pipeline released a separate report on the project.

“The report was sent to a number of investors in the project in an attempt to convince the investors that the project is no longer worth their time or money. The report was titled ‘Jordan Cove Risky Business’,” according to a press release from the conservation groups.

The report was sent to top bankers of Pembina Pipeline Corp. including RBC, Bank of Nova Scotia, CIBC, TD and JPMorgan Chase, in addition to potential investors of the project.

Most of that report highlights local opposition to the project, and the immense amount of regulatory work that the company is working through with state, federal and local governments.

“After over 14 years, and three different attempts at this proposal, Jordan Cove LNG is still at square one for permission to construct this project in Southern Oregon,” said Hannah Sohl of Southern Oregon-based community organization Rogue Climate.

“Our communities will do all it takes to ensure our climate, safety, lands, and waterways are protected and that Jordan Cove LNG never gets the green light to build.”

In response Jordan Cove said that they believe the market for liquefied natural gas is still a viable investment opportunity.

“If these people were in the market, and understood the market then they would be doing something else,” Jordan Cove spokesperson Paul Vogel said.

“Pembina is in the business and they are in the market, and all you have to do is look at the Paris climate agreement policy goals to replace coal with natural gas to understand that the market is there.”

Regarding tribal economic impacts, the report stated: “Four tribes operate casinos, RV parks, hotels and restaurants in the four counties where the Jordan Cove Energy Project will build a pipeline and terminal.

The tribes are the Cow Creek Band of Umpqua Tribe of Indians, the Coquille Indian Tribe, the Klamath Tribes, and the Confederated Tribes of the Coos, Lower Umpqua and Siuslaw Indians.

“The analysis finds that tribal business revenues will increase $17,221,590 a year during the construction phase of the project if construction workers and managers only occupy 50 percent of the hotel rooms and RV sites that would otherwise be vacant.

“After expenses, there would be $6.2 million that tribal governments could use for tribal programs for their members. These benefits will accrue to tribes and tribal members in each of the four-plus years that construction occurs,” according to the analysis

"ECONorthwest’s existence is attributable to our objectivity," director Robert Whelan said in an email to the H&N.

"That’s why people come to us. My first day working for ECO (23 years ago) I was told by my boss at that time — Dr. Randy Pozdena — never to allow a client to tell you what to conclude or use suspicious information from them because, once your reputation is damaged, you’ll never get it back in Oregon.

"And there have been times when my work concluded things the client did not like or would not use. Usually though, if the client’s idea is likely to go in that direction, I will tell them so before they spend any money on us."

"On my own I went ahead and checked other LNG projects in the U.S. and found that the numbers Pembina gave us were in the ballpark," Whelan said.

Nearly all the other data comes from public sources and is cited. Sources used include the US Census, IRS, county assessor offices, and US Bureau of Economic Analysis.

"Pembina never told us to delete or change anything. And we wouldn’t have done so if they did," Whelan said.