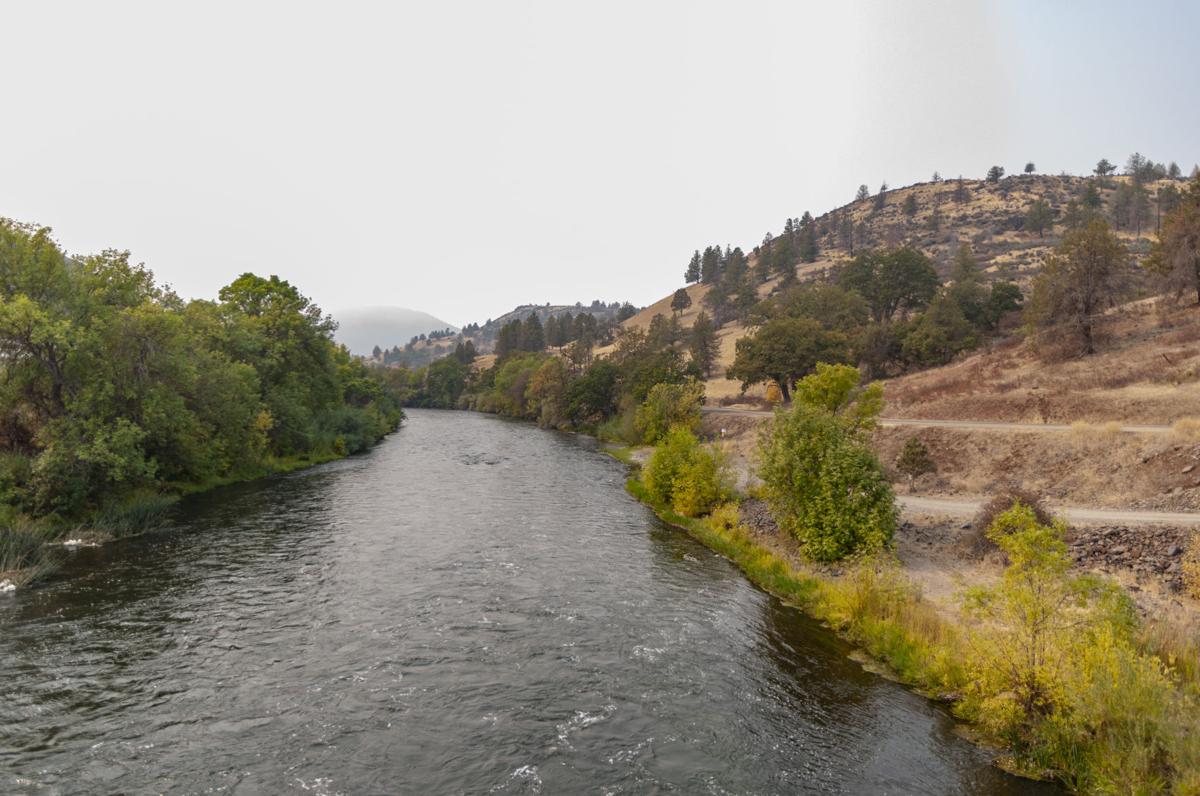 The Klamath River below Iron Gate Dam. This stretch of the river has developed an armored riverbed, which allows tiny annelid worms to gather in large colonies and worsen outbreaks of C. shasta, a salmon gut parasite. 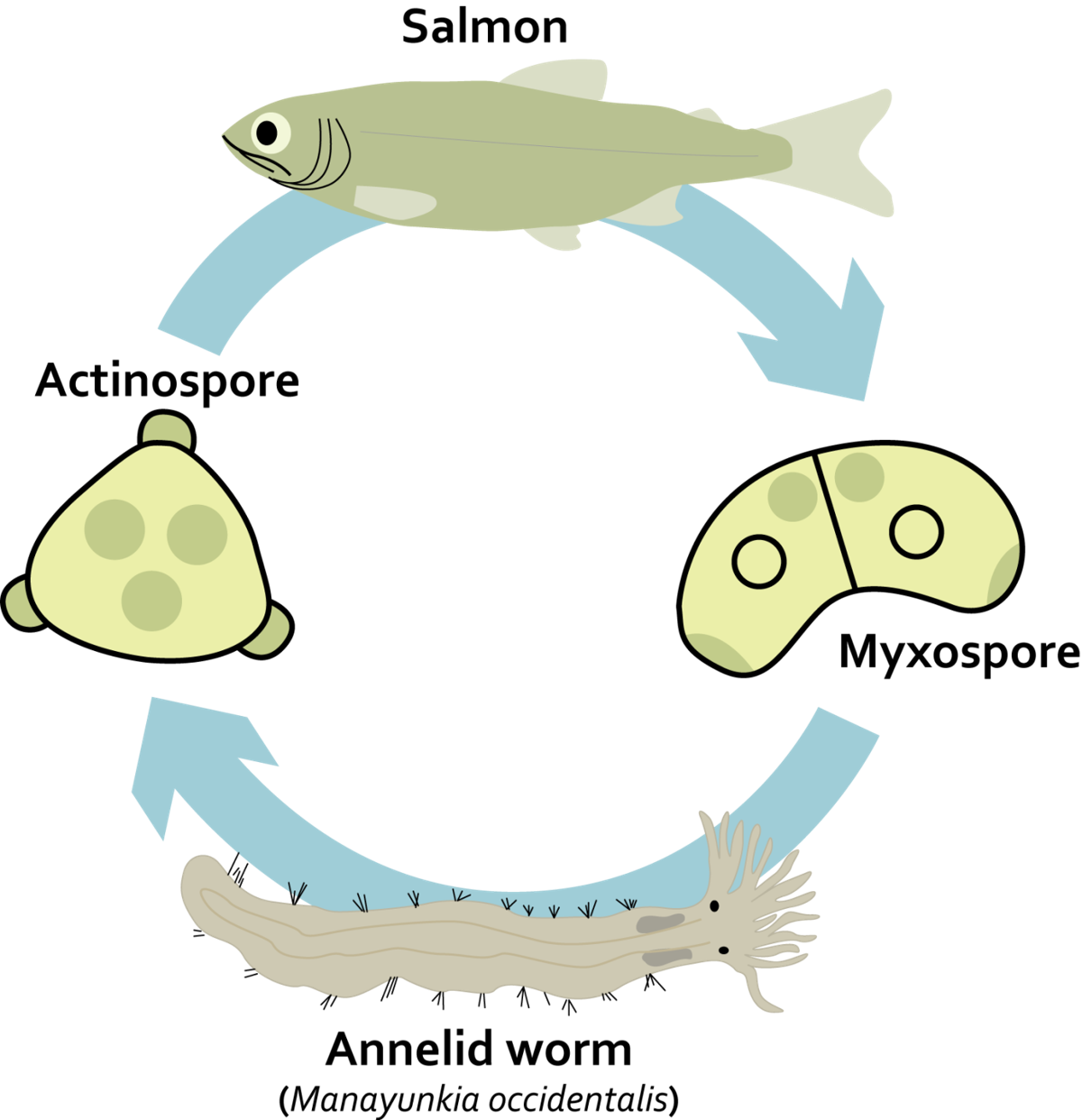 The life cycle of C. shasta. The parasite splits its time between invertebrate (worm) and vertebrate (fish) hosts, both of which are necessary to continue the cycle. 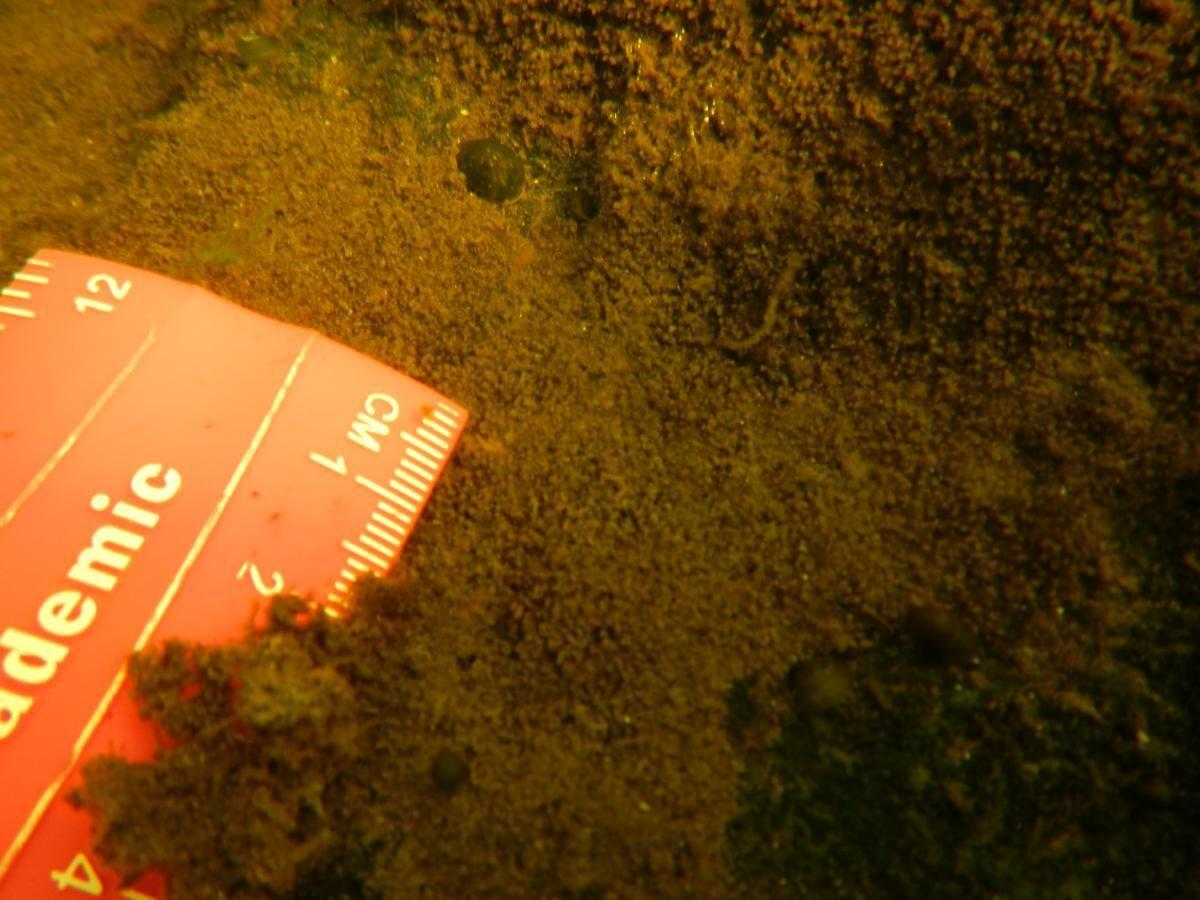 A "shag carpet" of worms, as salmon disease expert Jerri Bartholomew calls it, covers the Klamath riverbed. As part of research on salmon disease, scientists take samples of the worms at different times of the year to analyze them for disease prevalence and population density.

Editor’s note: In July, the Bureau of Reclamation pledged $1.2 million to fund new scientific initiatives that will inform the agency’s management of the Klamath Project. This is the second in a series of articles explaining the past, present and future of that scientific research.

The Klamath Basin used to be the third most important salmon-bearing watershed in the Pacific Northwest. Now, only a fraction of those runs remain.

The multiple reasons for their decline are complex and interconnected, but they all have to do with how water moves through the system.

One major contributor to Chinook and coho salmon’s plight is a tiny parasite called Ceratonova shasta. It’s a natural feature of most river systems in the region, but it forms particularly nasty outbreaks in the Klamath.

C. shasta‘s spread depends on an annelid worm called Manayunkia occidentalis, which lives on the riverbed and filter feeds nutrients out of the water. Almost transparent and smaller than an eyelash, the tiny worm thrives in rivers with relatively stable flows, unmoving riverbeds and high levels of organic nutrients. The Klamath has all three.

It starts with the parasite’s myxospore phase, during which it floats low along the Klamath’s riverbed. A filter-feeding worm ingests the spore, which uses its new invertebrate host to grow and develop. Once it matures into the actinospore phase within the worm, C. shasta returns to the water and comes into contact with a fish.

The fish absorbs the spore through its gills, and the parasite travels through its bloodstream to its digestive tract. At that point, the parasite wreaks havoc on the fish’s intestines. Having developed once again into a myxospore, the parasite then exits the fish and returns to the water, ripe for uptake by the worms once again.

A single C. shasta spore isn’t a death sentence, but during periods of high spore concentrations in the water, a fish dealing with an onslaught of the parasite can die within two to three weeks. And because salmon spend their lives traveling to and from the sea, a fish carcass can release a myxospore further downriver once it succumbs to the disease.

Jerri Bartholomew, director of the John L. Freyer Aquatic Animal Health Laboratory at Oregon State University, has been studying C. shasta and its interactions with river ecosystems since she was a graduate student in 1981.

“I’ve seen a lot of progress in what we know and how we can monitor it,” she said.

Research on the parasite’s role in the Klamath Basin began in the early 1980s in the Williamson and Lower Sprague Rivers, where researchers detected high populations of worms on the riverbed and high densities of parasite spores in the water. But the disease only seemed to impact non-native rainbow trout, which had been transplanted from another system and, unlike the native trout, hadn’t developed a resistance to C. shasta.

Throughout the 1980s and 1990s, scientists continued to map hotspots of C. shasta along the Klamath until they had painted a decent picture of the river’s problem areas.

“We knew it was there, and we knew where there were some problems, but it wasn’t until around 2002 or 2003 that we got funding to really go in and do more fine-tuned studies looking at the parasite distribution throughout the whole river,” Bartholomew said.

The data in those studies (and ones done today) include the number of parasite spores per liter of water, water quality and temperature measurements. Scientists also collect dead fish and perform sentinel studies (similar to the sucker mesocosms in Upper Klamath Lake) to analyze the disease’s severity and prevalence. And, especially during the past 10 years, researchers have been doing population counts and disease analysis on worms at specific sites throughout the river.

Most of those samples are taken in the field by biologists from the Karuk and Yurok Tribes on the middle and lower reaches of the river. They send samples to labs like Bartholomew’s or the U.S. Fish and Wildlife Service Lab in Arcata, Calif.

By 2010, researchers found that there are four separate genotypes of C. shasta, each of which had evolved to infect a particular fish species, and genetic sequencing revealed that these genotypes tend to concentrate in specific stretches of the river.

Since then, more studies have been done on M. occidentalis‘s role in the parasite life cycle, where the worms live in the river and what sustains their populations. Much of the research has focused on juvenile salmon migrating downriver to the ocean, who are more susceptible to the disease and, due to the river’s conditions, usually find themselves in the wrong place at the wrong time.

Susan Fricke, Water Quality Program manager for the Karuk Tribe, said the combination of a large hatchery and the Klamath River dams create a “perfect storm for fish disease.”

Data have shown that the density of C. shasta spores is highest between April and August, when temperatures are highest. Warmer water allows actinospores to float around for longer before being taken up by juveniles — and kill the fish more quickly.

A hatchery just below Iron Gate Dam, required in the terms of PacifiCorp’s original license to operate the dams, releases its juveniles around May and June. That’s later than when river-spawned juveniles typically begin their migrations to the sea, but it’s done intentionally to avoid competition with the naturally spawned salmon. However, it also lengthens the period of time during which fish are swimming through the infectious zone miles below Iron Gate at the peak of disease prevalence.

“All those spores now find fish when maybe they wouldn’t have,” said Mike Belchik, senior fisheries biologist for the Yurok Tribe. “The cycle is able to complete much more vigorously than it would’ve otherwise been able to.”

Thanks to the dam, the stretch of the Klamath below Iron Gate has experienced a constant, stable flow of water for decades. That’s allowed large rocks and gravel to cement themselves on the riverbed. Normally, sediment carried from upstream would act like sandpaper, grinding those rocks into finer particles and forcing the riverbed to frequently turn over.

But because most of the river’s sediment gets trapped behind the dam, nothing’s been able to pare down the bed below it, forming what researchers call an “armored bed.” That’s prime habitat for the worms, who anchor themselves to the immobile gravel and spend their days catching the wealth of concentrated nutrients flowing from the slow-moving eutrophic reservoirs upstream.

“The floor of the river is covered in them in certain parts of the Upper Klamath,” Belchik said. Bartholomew compared the worm colonies in some places to a shag carpet.

Because Iron Gate Dam blocks any further fish passage upstream, including access to fast-moving, cold-water tributaries free of the worms and parasite, hatchery juveniles must pass through a gauntlet of spore-releasing worms. In years that saw few changes in river flow, the worms have been given the time to set up shop on the stable bed. And because the salmon help further the parasite’s life cycle, that in turn results in more spores being released into the water. A paper published earlier this year found an “associative relationship” between infection rates in hatchery fish and C. shasta‘s prevalence the following fall and spring.

Even naturally spawning salmon can’t go past Iron Gate, so their offspring must also endure the miles of “infectious storm,” as Fricke calls it, to migrate out to sea. In years of high disease prevalence, many of those juveniles die before they even reach the Klamath’s estuary, releasing the parasite back into the river to eventually be picked up by worms there. Adult salmon, who don’t necessarily die from the disease before they spawn, still carry those spores back to Iron Gate to start the parasite’s life cycle once again.

Reclamation’s recently announced scientific investments include a salmon disease data portal for the Klamath River. Nicholas Som, statistician at the U.S. Fish and Wildlife Service’s Arcata office, said the cloud-based portal will help centralize data from various tribal, governmental and academic organizations. There are quite a few separate entities studying the Klamath, so having a one-stop shop for data could foster more collaboration between them.

“This will dramatically improve the ability of managers and researchers to access consistent, high quality and current data for all of their monitoring, analysis and reporting needs,” Som said, adding that the portal’s web interface will be developed by an independent contractor.

Belchik welcomed the new portal, calling it “a reorganization of what’s already out there in a way that’s more useful.”

Fricke likened it to the Klamath Basin Monitoring Program, which brings together data from tribes and government agencies mainly concerning harmful algal blooms in the Klamath watershed.

For Bartholomew, it’ll be helpful for scientists from different agencies to have to talk to each other and evaluate metadata in order to use the portal. She recalled instances when other researchers misinterpreted her data in their own studies or models.

“It requires people to have conversations with each other about how [the data] is used,” she said. Such conversations have already been happening informally between some river researchers, but she said it will be helpful to formalize that collaboration through the portal. After all, it’ll take a village to rein in C. shasta.