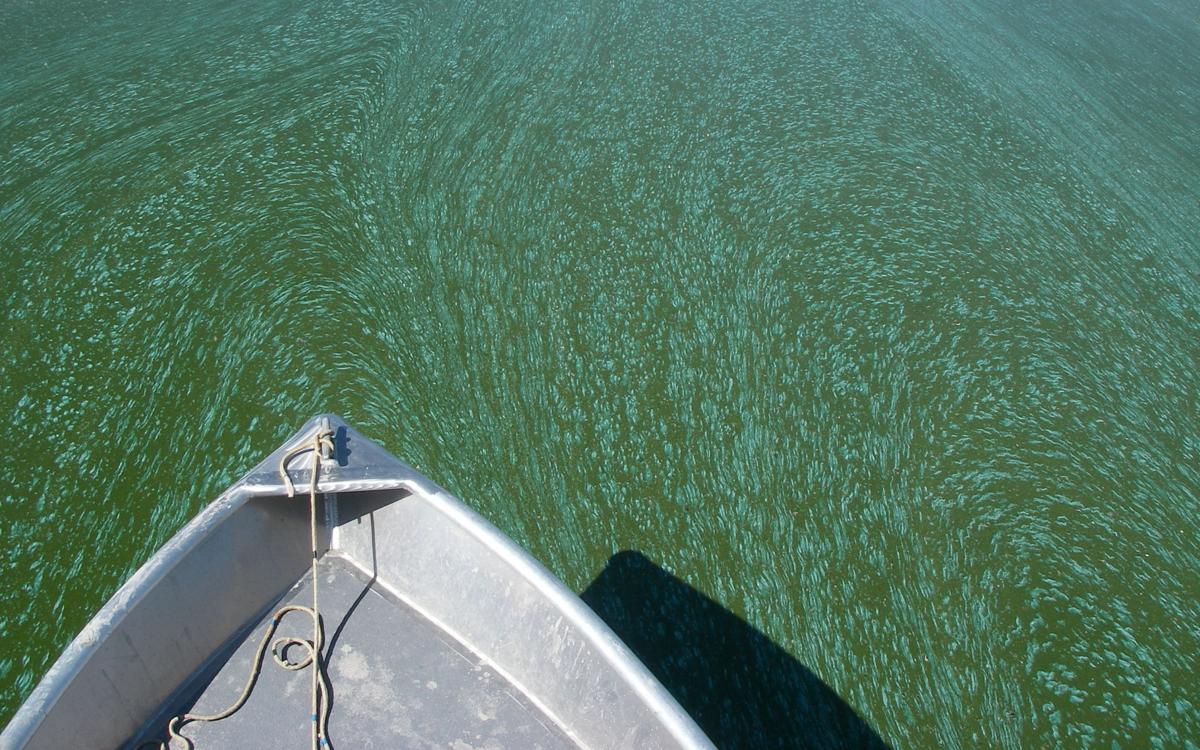 A field sampling boat moves through an algal bloom in Upper Klamath Lake. 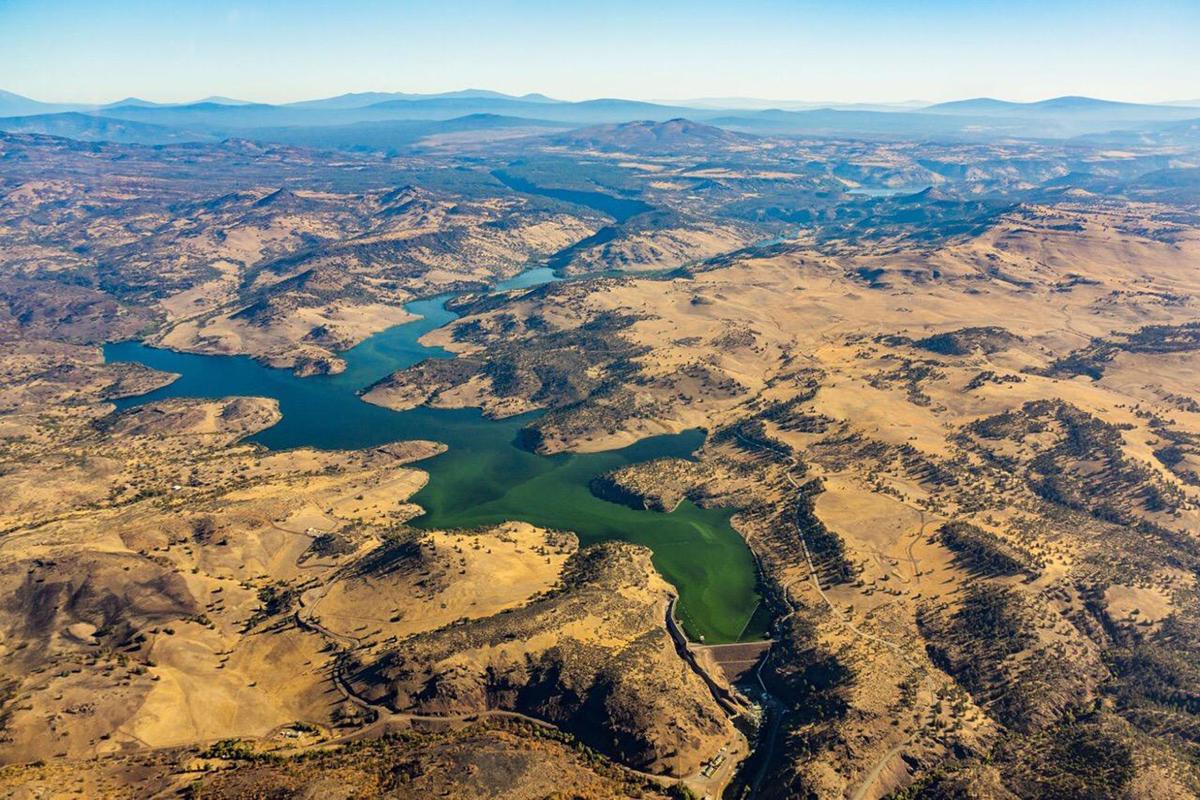 A field sampling boat moves through an algal bloom in Upper Klamath Lake.

It happens every summer: Wispy, seafoam-green formations appear on the surface of Upper Klamath Lake. From space, the iridescent blooms look like emerald food coloring mixing into the shallow brown water.

The view from the ground is less ethereal: Foamy green scum washes up along the shore. And though the water resembles pea soup, it smells worse. This is an algae bloom, and it’s a crucial driver of water quality — or lack thereof — in the Klamath Basin.

Rebecca Hillwig, natural resources specialist at the Oregon Health Authority, said the bacteria “mimic” algae: They photosynthesize to create food, release oxygen into the atmosphere and depend on phosphorus and nitrogen for nutrients.

Just like plants, bacteria need a variety of conditions to grow and thrive: warm temperatures, calm water, abundant sunlight and the right ratio of phosphorus to nitrogen. In the summer, Upper Klamath lake has all four, making it a perfect environment for aquatic microorganisms.

Two cyanobacteria species — Aphanizomenon flos-aquae and Microcystis aeruginosa — are most commonly found in the Upper Basin, from Upper Klamath Lake through Lake Ewauna and in the slow-moving Klamath River upstream from Keno Dam. Naturally occurring in low numbers throughout the year, they work in tandem to push the basin into aquatic “bloom” when the weather heats up.

In May and June, the water warms and sunlight becomes plentiful. Thin, grass-like Aphanizomenon takes advantage of the phosphorus found in the lake, which are derived from the basin’s phosphorus-rich volcanic rocks and soils.

As it multiplies, the bloom grows larger. Because Aphanizomenon is a nitrogen fixer, it’s able to filter exactly the amount of nitrogen it needs out of the air to sustain itself. Once its populations begin to crash later in the summer, pinhead-sized colonies of Microcystis take the reins. Because their predecessor has already enriched the water with nitrogen, they can make use of the available nutrients.

All that growth is unsustainable, and when lake conditions change toward the end of the summer, the bacteria populations collapse. That, Hillwig said, is when you have to worry about the toxins.

Cyanobacteria produce chemicals whose amino acids negatively interact with proteins in other living organisms. Microcystis, responsible for the majority of the toxins in Upper Klamath Lake, produces a liver toxin and a neurotoxin. The blooms secrete trace amounts of toxins at their peak periods, but once they die, they release all the harmful chemicals in their cells back into the lake. Ingesting water containing high concentrations of those toxins can cause negative health effects for humans, pets and wildlife.

That doesn’t mean a human will start dissolving if they swim through a bloom, but Hillwig said they could experience skin and eye irritation — and, if they swallow the water, more serious gastrointestinal or neurological symptoms like abdominal pain, headaches, numbness and slurred speech. The Oregon Department of Health recommends that people, especially those with preexisting health conditions, take precautions near water bodies that have recreational use advisories. Those advisors are issued when toxin levels surpass specific concentrations.

Hillwig said that while Upper Klamath Lake has been experiencing both moderate and heavy areas of blooming this summer, official sampling of toxin levels didn’t happen as early as normal due to budget issues. Last week, the Department of Environmental Quality took samples at Moore Park and Lake Ewauna, which came back with “very low” toxin levels, she said. Odell Lake, northwest of Chemult, is currently under an advisory after satellite footage showed blooms at the water’s surface.

While humans and their pets should avoid waterways impacted by algae blooms, fish that live there don’t often have a choice. Thus, algae blooms have been a significant concern in the U.S. Fish and Wildlife Service’s Biological Opinions on endangered suckers in Upper Klamath Lake.

Hillwig said that Lost River and shortnose suckers, which live in Upper Klamath Lake and its tributaries, are considerably better at filtering out the toxins than humans. Their bigger issue with the blooms is how they impact water quality in the lake.

The 2019 Biological Opinion stated that “the massive annual bloom and subsequent crash dynamics [of algae] are the primary driver of most water quality dynamics in Upper Klamath Lake.”

The first effect is on dissolved oxygen available in the lake. Though tiny aquatic plants like algae and cyanobacteria are some of the oldest organisms on the planet and contribute a great deal of oxygen to our atmosphere, large blooms restrict the ability of other aquatic plants to photosynthesize below the surface. At night, when the algae switch to consuming oxygen, they leave very little for other lake residents. Low oxygen availability can be toxic to fish.

Fish and Wildlife also said blooms can cause “large daily swings” in water acidity as they switch between oxygen production and consumption, which can stress fish.

Dissolved oxygen levels in the water tend to get especially low around August, when the bacteria die and decomposers in lake sediment begin to require oxygen. In some years, such as 1996, oxygen levels dropped so significantly it led to large fish kills.

Juvenile fish are hit particularly hard by this suite of environmental stressors, which is part of why sucker populations have not improved over the past couple decades. Not enough are surviving to adulthood to be able to reproduce. The BioOp hypothesized that water quality is either “directly responsible” for high mortality in juvenile suckers, or one of multiple factors that leaves them more vulnerable to disease and predators.

The extent to which Upper Klamath Lake’s water level impacts the health of the suckers has become a hot topic surrounding the BioOps. Irrigators have called for renewed studies, and the Bureau of Reclamation announced this week that a more robust lake level study would be included among five new scientific initiatives in the basin. Water temperature and water level are related: The shallower the water, the easier it is for the sun to warm it and the more likely a bloom will form.

But Hillwig said controlling the overall lake level may not be a silver bullet for reducing blooms — especially since their occurrence in Upper Klamath Lake is natural.

“Keeping more water in the lake isn’t going to eliminate the blooms,” she said. “It might reduce them or keep them from maintaining themselves, but in general it’s not going to get rid of the formation of a bloom.”

However, scientists do know that Aphanizomenon didn’t naturally occur in Upper Klamath Lake before the 20th Century, and studies suggest that climate change will exacerbate future cyanobacteria blooms.

Still, specific actions lake managers can take to limit bloom growth remain unclear, especially since suckers face a litany of other problems in the basin. One thing is certain — for humans, at least: When it comes to Upper Klamath Lake, don’t drink the water.