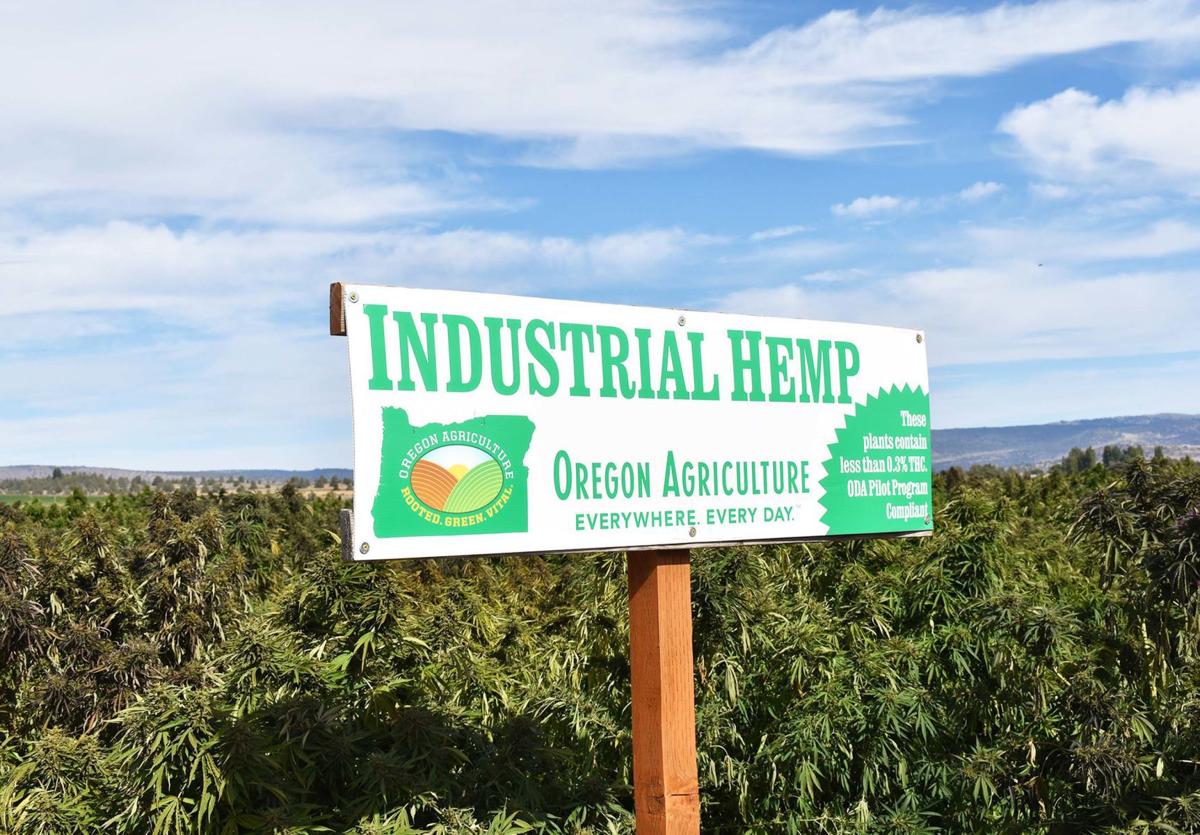 MBS, an industrial hemp farm, was one of the many stops on the Klamath Water Users Association’s 12th Annual Fall Harvest Tour Wednesday. 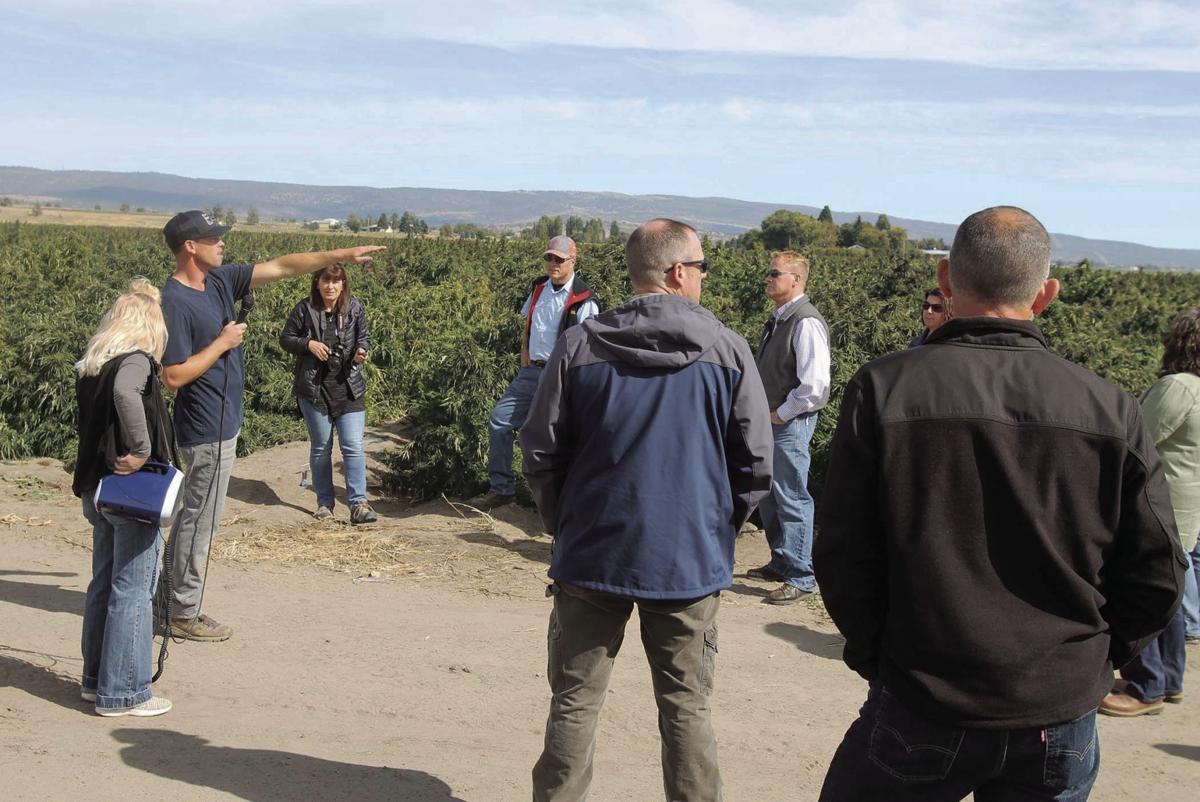 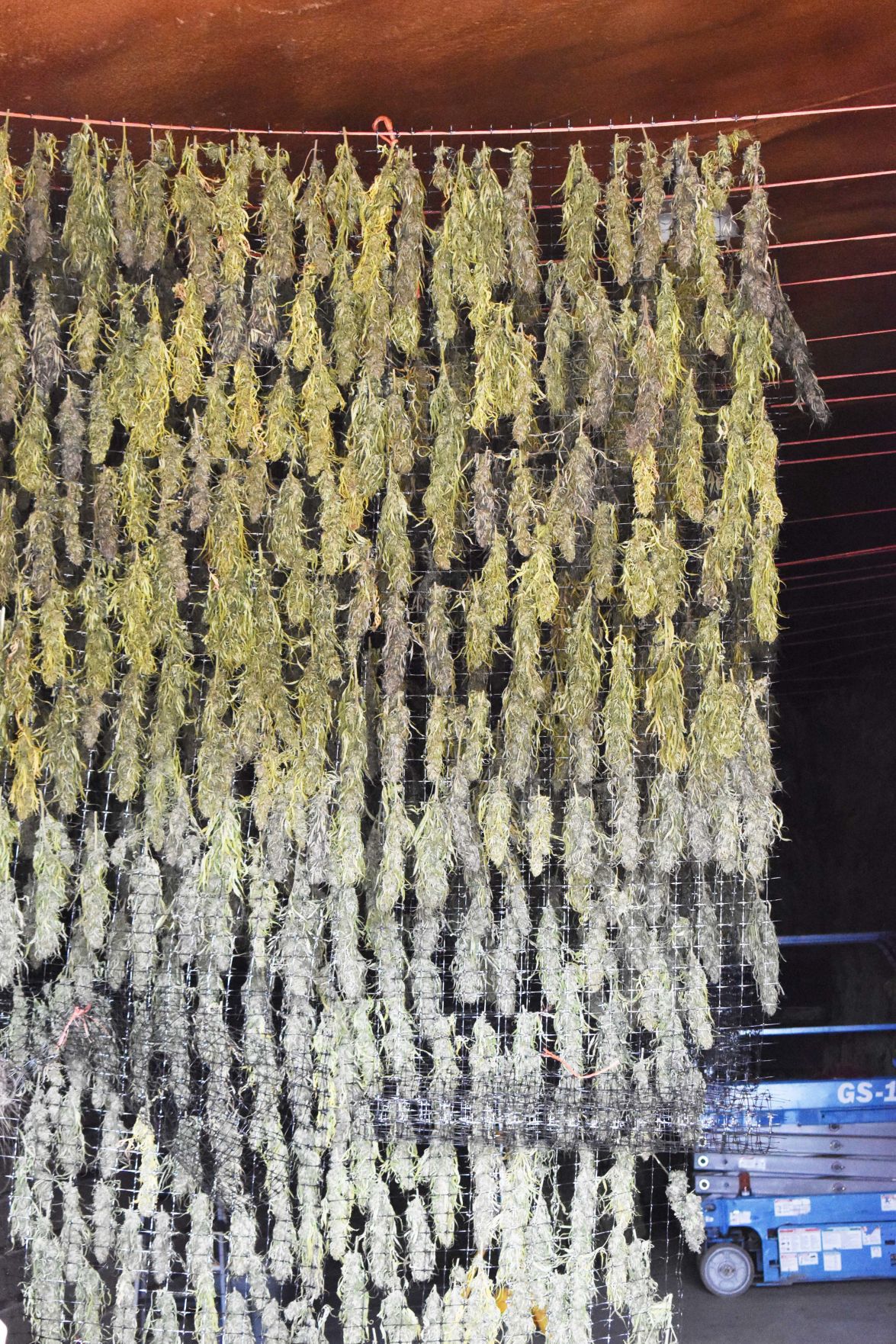 Hemp flowers are lined up on wires to dry before being processed for their oils at MBS Farms in Malin. 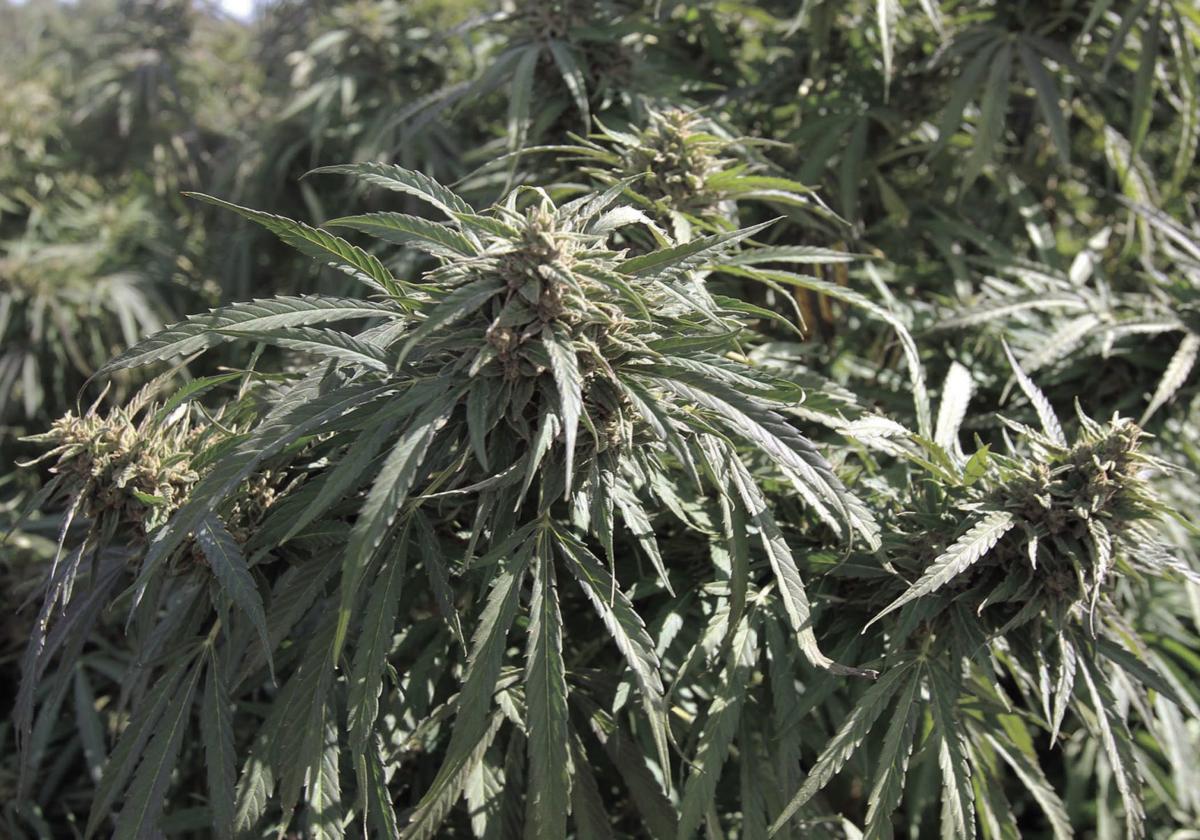 MBS Farms is in its first year growing industrial hemp in Malin. The owners led attendees of the 12th Annual Fall Harvest Tour through the farm to see operations on Wednesday. 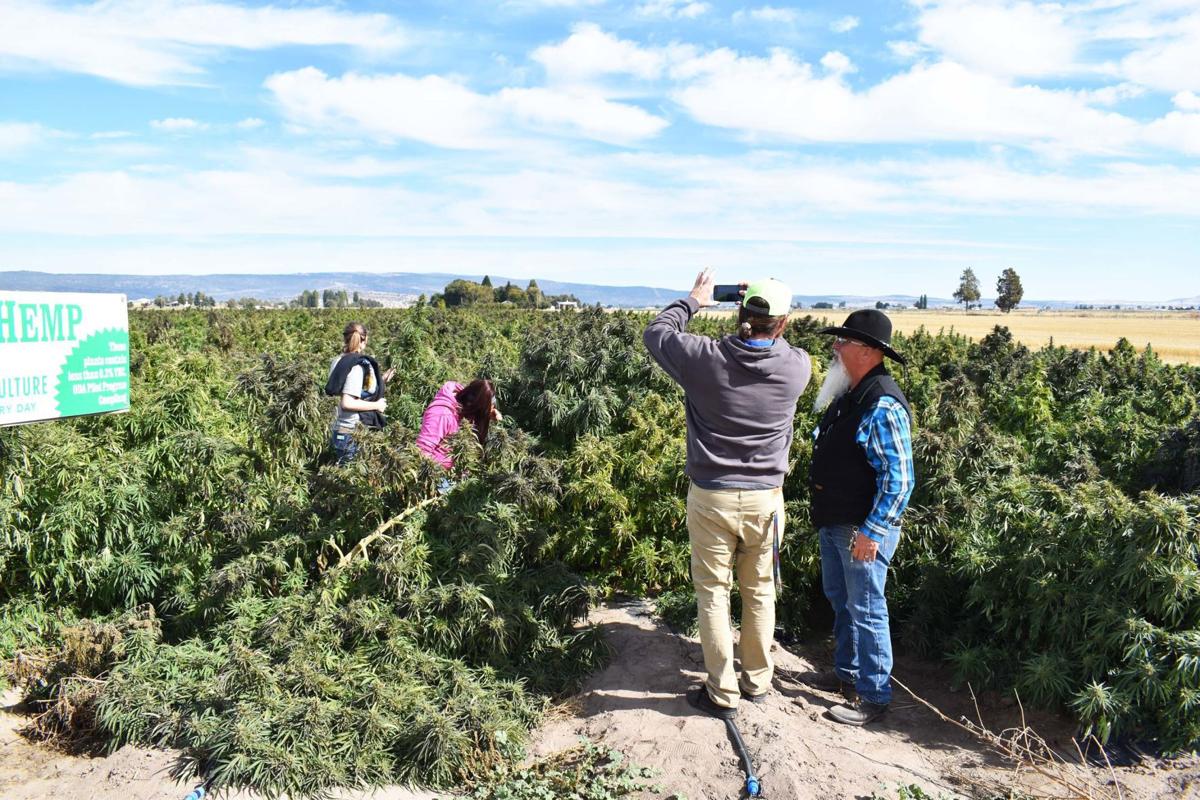 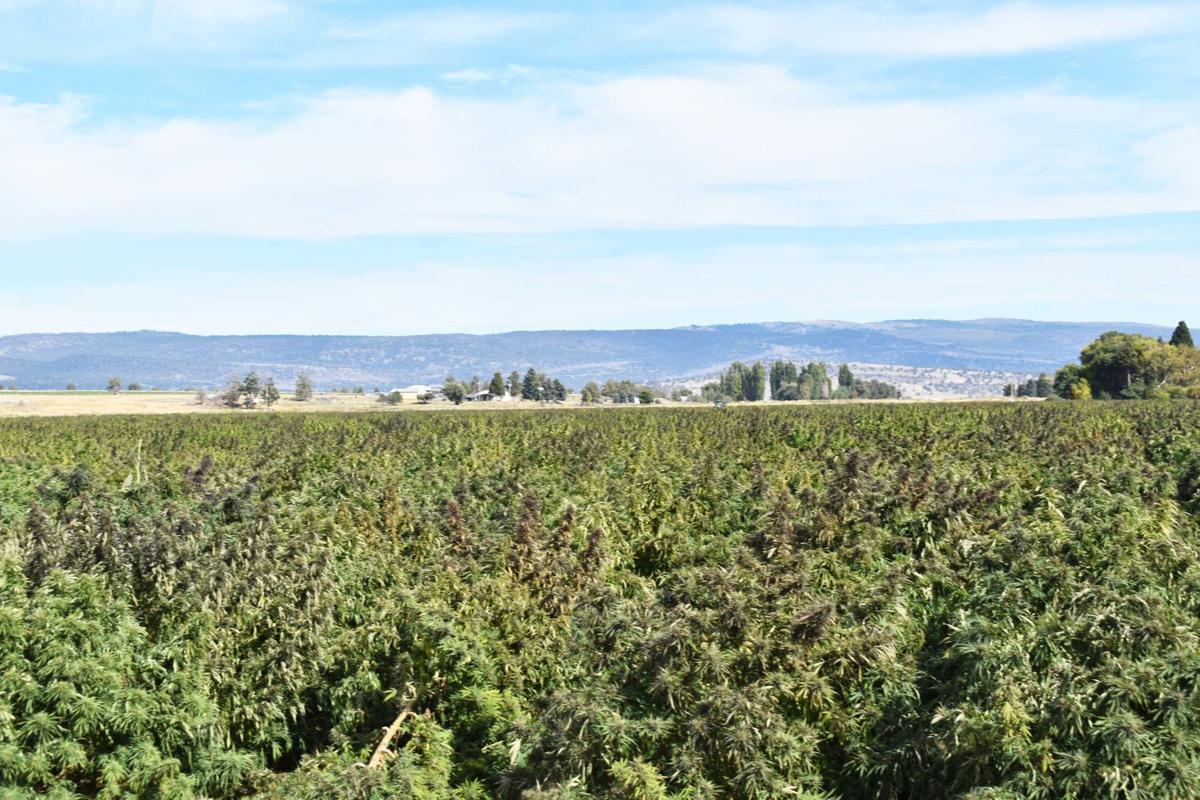 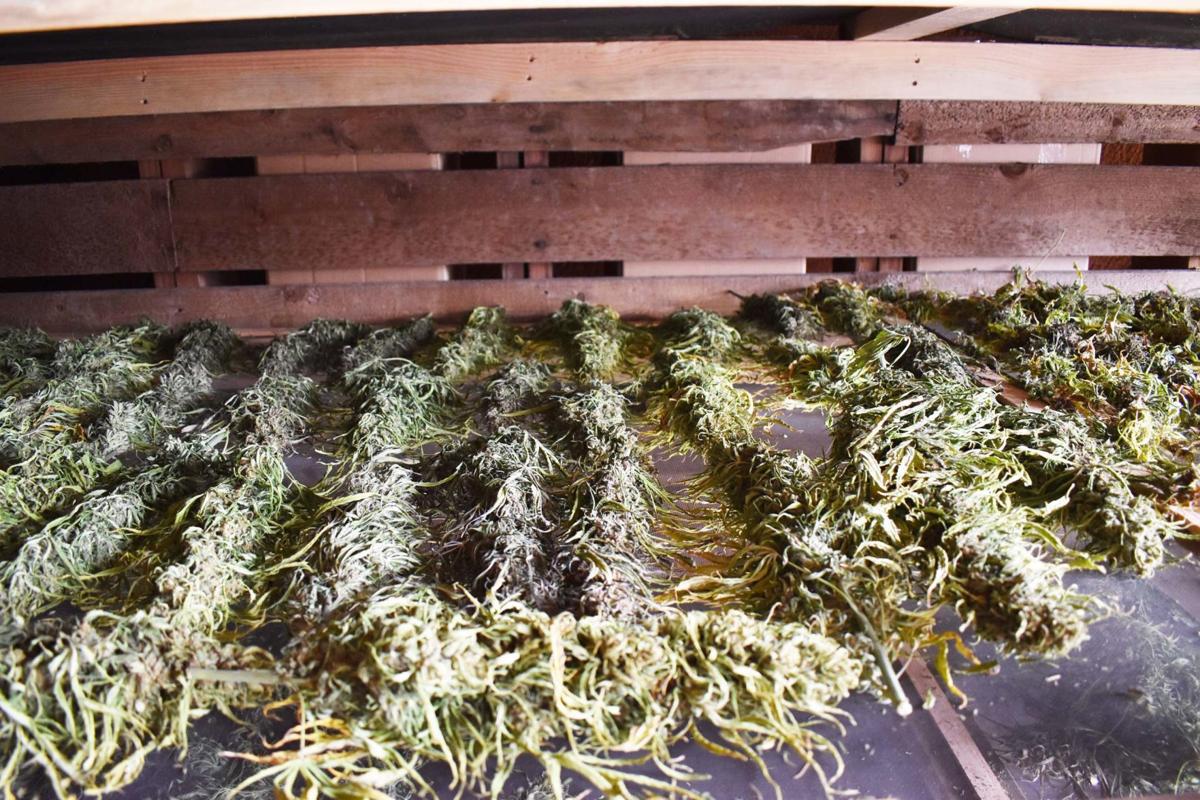 Rows of hemp flowers dry on shelves at MBS Farms near Malin.

Subscribe Today! Please read: Readers of local content on the Herald and News website – heraldandnews.com – will require a subscription beginning today. For the first few months, non-subscribers will still be able to view 10 articles for free. If you are not already a subscriber, now is a great time to join for as little as $10/month!
1 of 7

MBS, an industrial hemp farm, was one of the many stops on the Klamath Water Users Association’s 12th Annual Fall Harvest Tour Wednesday.

Hemp flowers are lined up on wires to dry before being processed for their oils at MBS Farms in Malin.

MBS Farms is in its first year growing industrial hemp in Malin. The owners led attendees of the 12th Annual Fall Harvest Tour through the farm to see operations on Wednesday.

Rows of hemp flowers dry on shelves at MBS Farms near Malin.

MALIN – It’s green, it’s growing in spades, and it’s got a unique smell that may be slightly familiar to some.

Industrial hemp is here in Klamath County and it is what’s for harvest this fall for Marc Staunton, and many others in Southern Oregon.

Nearly 60 participants toured the Klamath Basin in the Klamath Water Users Association’s 12th Annual Fall Harvest Tour Wednesday, which, in addition to the hemp operation at MBS Farms, included stops at: Anderson-Rose Dam in Merrill, hay and alflalfa operations at J.W. Kerns, Potato processing at Baley Trotman Farms, and the Midland area to taste and see what Skyline Brewing has to offer.

Each year, the association hosts the tour as an opportunity to learn about the history of the region and see what’s growing in south central and northern California, as well as what’s new this year in the world of agriculture.

And this year, that new crop is industrial hemp.

Staunton on Wednesday welcomed tour participants to the new venture – a 48-acre industrial hemp farm, where he’s harvesting hemp flowers for CBD oil as a part of MBS Farms. The farm is owned by the families of Dane Marshall, Jake Baley, and Staunton.

Industrial hemp was legalized in November 2018 through the U.S. Farm Bill, and the families were quick to keep up with the trend.

“This is a very young and budding – no pun intended – industry that is moving in the direction of modern agriculture and industrial agriculture,” Staunton said.

“The state of Oregon and Klamath County were prepared and allowed industrial hemp in their counties. Right across the border in Modoc and Siskiyou counties, it’s not yet legal to be growing industrial hemp there.

Dane and Lela Marshall are first and third-generation farmers, respectively, and part of the farm as well. Dane Marshall led tours of the field and drying areas on Wednesday. He talked up the benefits of cannabidiol (CBD) oil for relieving anxiety and other ailments, noting the financial impact as well.

“Right now, it’s a money crop,” Dane Marshall said. “We’ve seen an opportunity to jump in on it.”

For Staunton, it’s another chance to try a new crop, something his family has been doing for years.

“My grandpa – he and his brother’s philosophy was to always be trying new techniques to farming or new crops in general,” Staunton added. “That’s how we started onions, that’s how we started growing chip potatoes, is kind of just trying to find things that fit.

“I don’t view this as being a whole lot different than my tries at carrots or corn or sunflowers or lettuce,” he added.

Staunton was quick to remind attendees of the tour what could and couldn’t be done with the crop.

“Industrial hemp is not your Bob Marley party,” Staunton said.

“You can’t get high from smelling it,” Staunton added, noting the low levels of tetrahydrocannabinol (THC).

“There’s part of the stigma of the crop whether it’s legitimate or not,” he added.

Some ask Staunton if he’ll make any money on it this year or the next, wondering if it’s a “one-hit wonder” crop.

Others ask him about the impact of the smell on neighbors or the fact that it looks like a marijuana plant.

Tricia Hill, with Gold Dust Farms in Malin was a participant on the tour and reminded the group that farming operations are protected by the Oregon Freedom to Farm Act, including when an agricultural odor is involved.

“I know no farmers in this valley that are wanting to blatantly try to be disrespectful to their neighbors,” Staunton said. “Other than smell and Pollen, there is probably very little risk to this crop versus other crops.”

More likely, according to Staunton, there are chances to expand operations and uses for the product.

“It’s a huge increase in acres but nobody really knows the development of the market,” Staunton said.

Staunton led participants through the drying area for harvested hemp flowers, as well, which hold the highest content of oil. Hemp flowers clipped in the field are hung and dried in a dry place for about three to 30 days.

“The most unoriginal use would be smoking it, and there is a fair amount of people who use CBD flower for medicinal purposes, whether it be for certain pain and ailment,” Staunton said.

“There’s also a lot of other potential uses with flower,” he added.

“It could also be used to blend different products ... this product takes a lot more work to get to, and so it is worth a lot more as a finished product.”

There’s about 3,000 registered acres of industrial hemp in Klamath County versus about 13,000 acres in Jackson County, but Staunton said he wants to be “cream of the crop” despite the number of acreage.

The way Staunton sees it, Napa Valley has cornered the wine industry, and he sees potential for the Basin to do similar things with the oil harvested from hemp, and eventually hemp for textile use.

“We might be able to produce something that is unique,” Staunton said. “Wouldn’t it be nice to be the Napa Valley of something?”