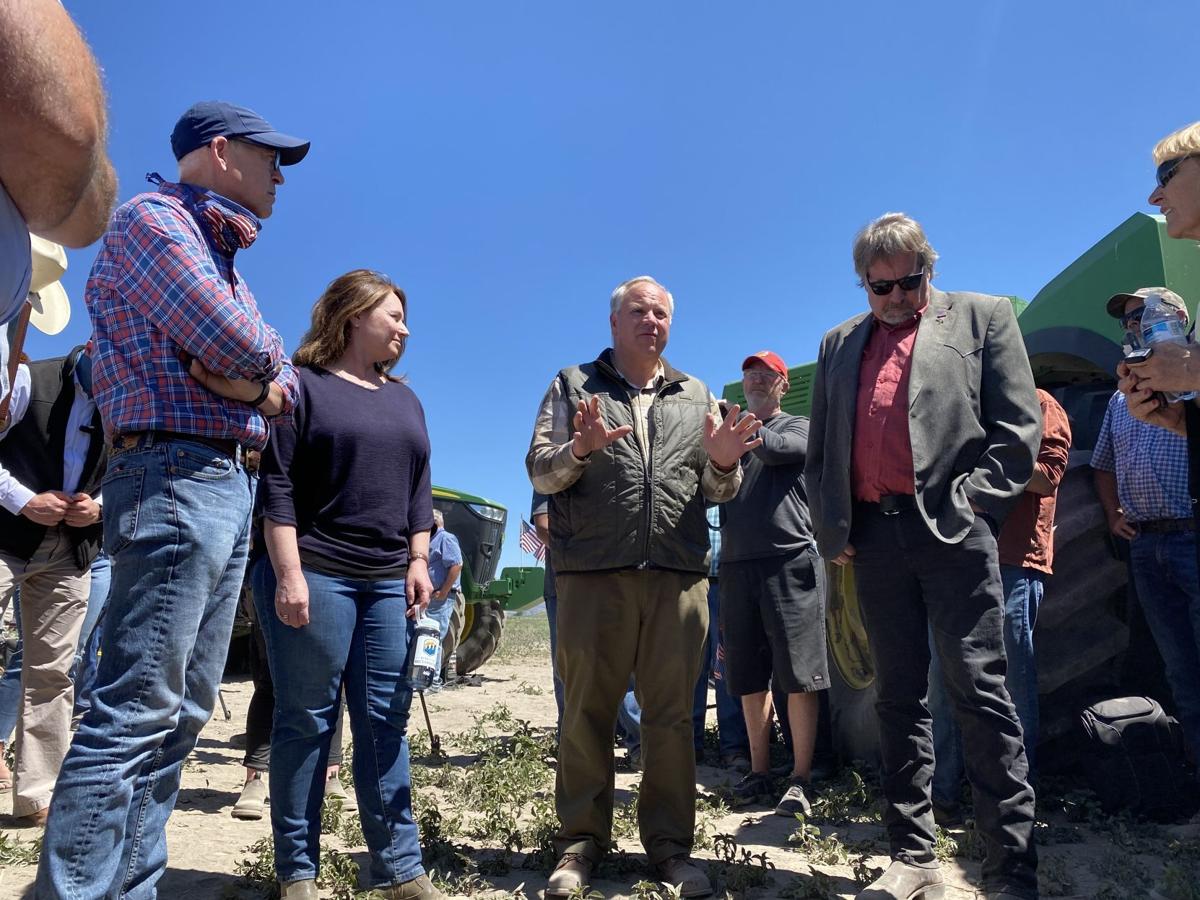 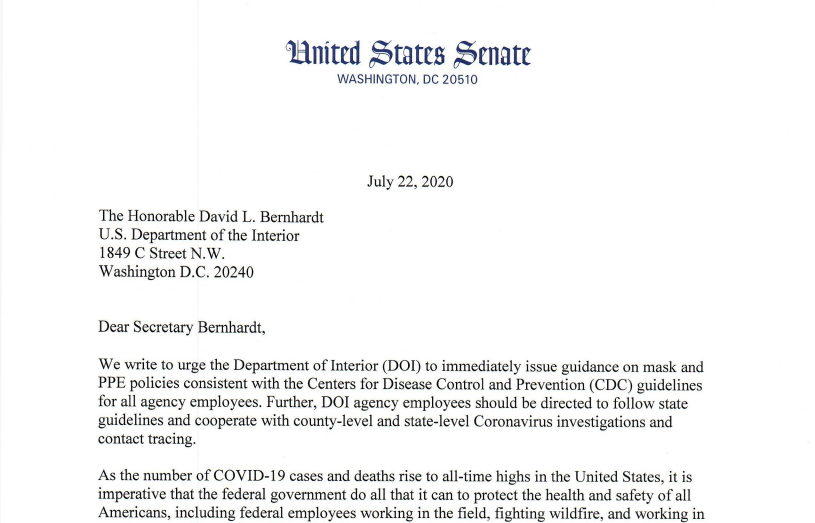 U.S. Senators Ron Wyden (D-Ore.), Jeff Merkley (D-Ore.) and Elizabeth Warren (D-Mass.) sent this letter to Interior Secretary David Bernhardt expressing their disappointment with his refusal to wear a mask during a meeting with area tribes earlier this month.

U.S. Senators Ron Wyden (D-Ore.), Jeff Merkley (D-Ore.) and Elizabeth Warren (D-Mass.) sent this letter to Interior Secretary David Bernhardt expressing their disappointment with his refusal to wear a mask during a meeting with area tribes earlier this month.

Three U.S. senators sent a letter to Interior Secretary David Bernhardt on Wednesday demanding he “immediately issue guidance on mask and PPE policies” for Interior Department employees. The letter comes after the Klamath Tribes voiced concern with Bernhardt’s decision not to wear a mask at a meeting with tribal stakeholders during his visit to the Klamath Basin earlier this month.

In the letter, Senators Ron Wyden (D-Ore.), Jeff Merkley (D-Ore.) and Elizabeth Warren (D-Mass.) stressed that the Centers for Disease Control’s guidelines regarding personal protective equipment and face coverings “apply to all people, including those working for federal agencies.”

Secretary Bernhardt and Bureau of Reclamation Commissioner Brenda Burman held a meeting with four tribes along the Klamath River watershed on July 9 during a historic joint visit to the basin. Representatives Greg Walden (R-Ore.) and Doug LaMalfa (R-Calif.) were also in attendance.

In a news release the following day, the Klamath Tribes said they were critical of the meeting, during which Secretary Bernhardt announced that he would not be wearing a mask. The Commissioner and Rep. LaMalfa also did not wear face coverings. Oregon Gov. Kate Brown expanded the mask mandate on July 1, requiring all Oregonians to wear face coverings while indoors.

The officials’ decisions not to follow CDC and state guidelines “has unnecessarily added to the disproportionate risk of infection faced by our impoverished tribal community,” the tribes’ release said.

The senators’ letter echoed that statement, pointing out that Black, Latinx and Indigenous communities have been impacted by COVID-19 at a higher rate than majority-white ones. It also mentioned that rural areas and tribal in Oregon are experiencing a rise in cases. The Klamath Tribal government has taken serious precautions to enforce social distancing and face covering mandates and has only recently reported the tribe’s first cases, but there is still concern that those outside the community could worsen the spread.

When someone talks, breathes, coughs or sneezes, they send small liquid droplets flying out of their mouth and nose and into the air. If they’re infected with COVID-19, those respiratory droplets can spread the disease to people in their immediate path. A face mask significantly reduces the amount of droplets they send into the air and how far they fly, making it a helpful tool (along with social distancing and handwashing) in fighting the coronavirus. While the CDC did not initially recommend the public wear face masks at the start of the pandemic, in part to prevent a shortage of medical masks for healthcare workers, they reversed their decision in early April. As cases rise across the U.S., scientists are urging people to wear masks if they enter public spaces where they’ll be within 6 feet of others.

The senators’ letter also mentioned “on-the-ground reports” of Bureau of Land Management employees, who are under the Interior Department’s jurisdiction, not cooperating with contact tracers in Oregon working to track the spread of COVID-19. A spokesperson for Senator Wyden said local public health officials alerted the office to BLM employees’ non-compliance but declined to specify where those incidents occurred.

“We are concerned this blatant disregard for the public health is happening across the agency in other states,” the senators wrote. “This type of cavalier and callous indifference for human safety is unacceptable, especially from those in positions of leadership.”

The Interior Department has released guidelines for reopening that recommend face coverings in certain areas of their main building in Washington D.C., but it has not made an announcement about whether all department employees across the country should wear masks.

In their letter, the senators asked Secretary Bernhardt to respond by July 29 with a detailed plan for requiring department employees to follow CDC, state and local guidelines to mitigate the spread of COVID-19.