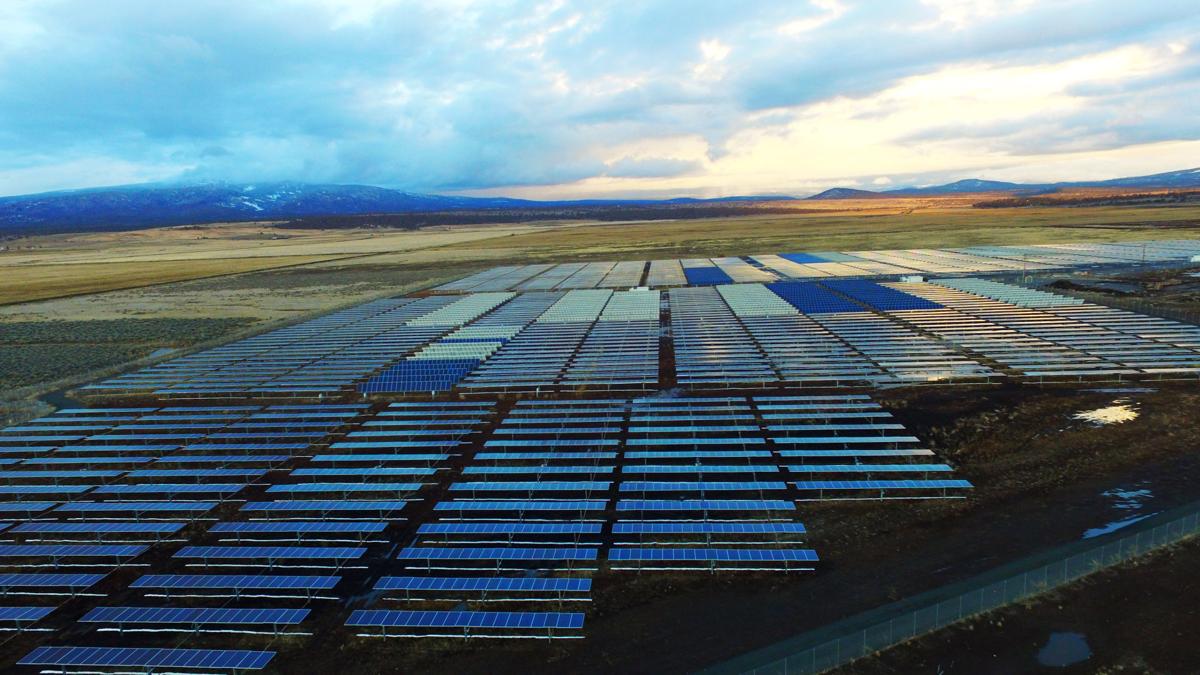 A solar array in Bly covering 40 acres on the former site of a Weyerhaeuser industrial site was built in 2016, and for a time was the largest solar array in the state of Oregon. New proposed solar sites in Lake County will cover thousands of acres. 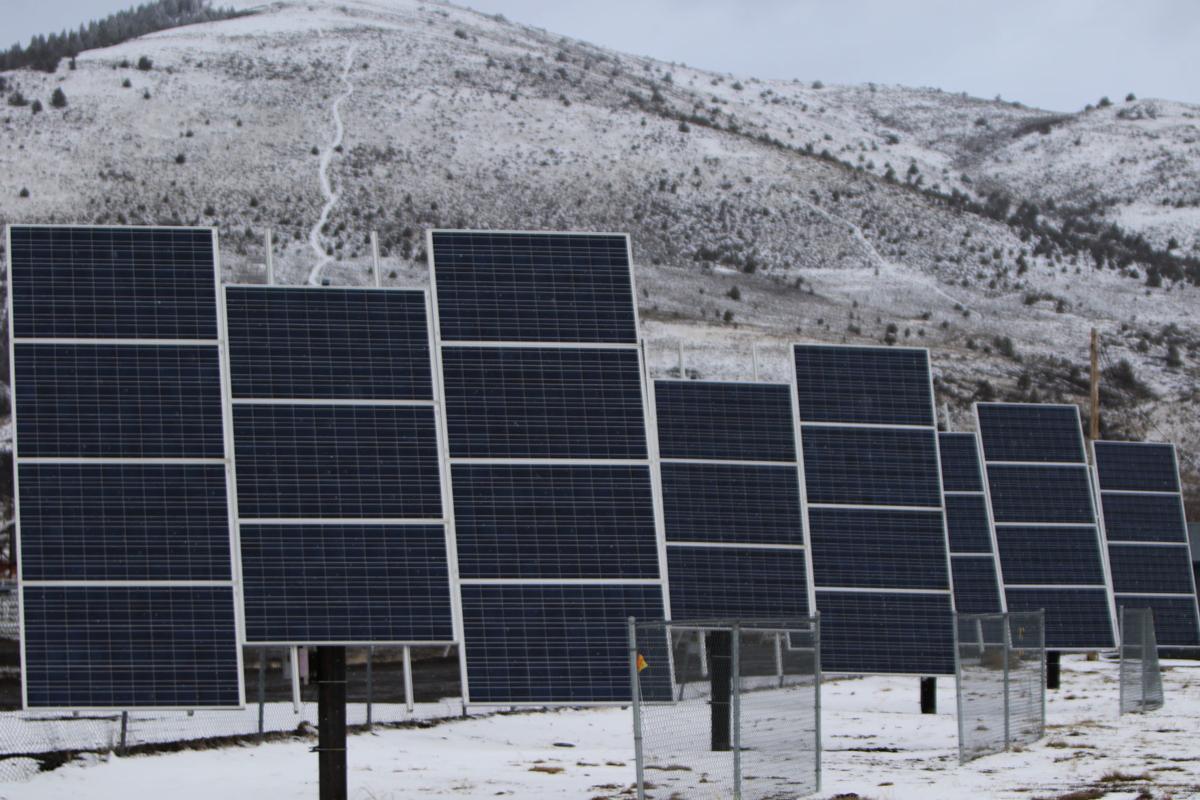 Solar panels align on the grounds of the Lake County Fairgrounds in Lakeview. Multiple solar projects being proposed would make Lake County unrivaled in the state of Oregon for solar renewable energy production, but the plans have critics. 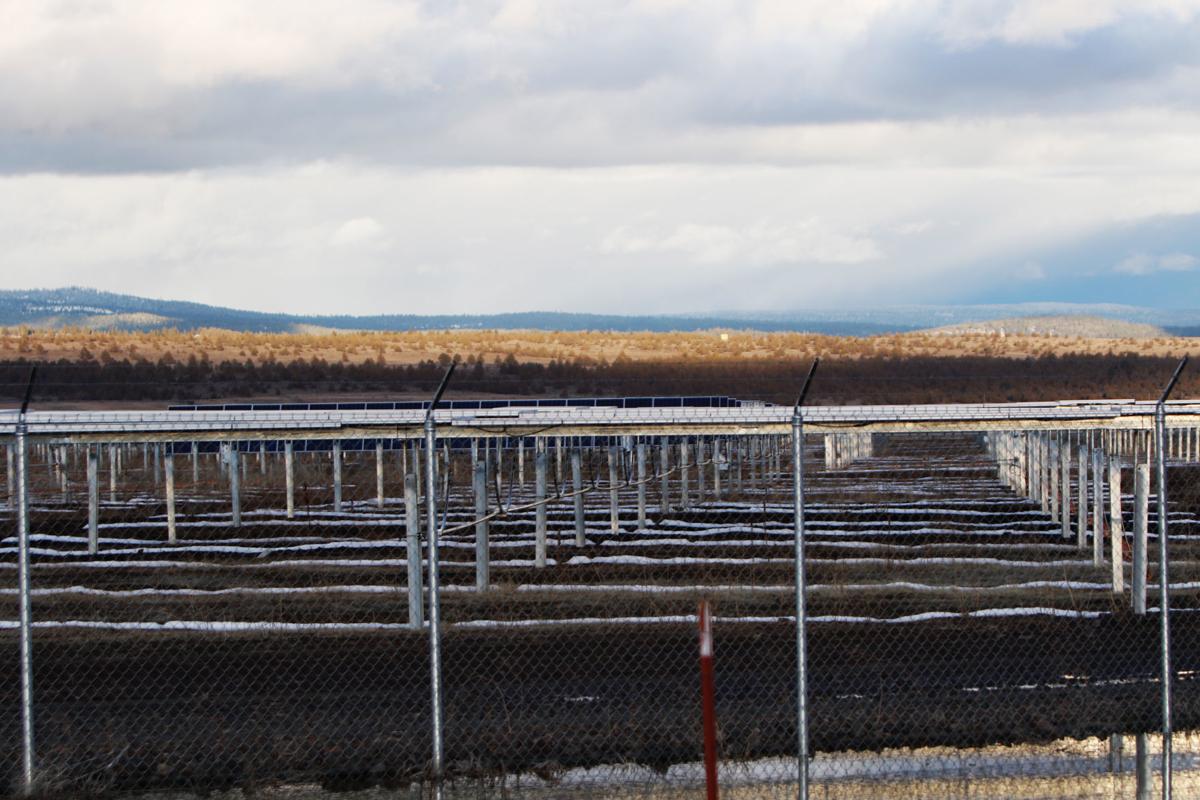 One of many small solar project sites in Lake County that have sprung up in the past few years. As new solar projects are being proposed, the solar sites are drawing concern from residents critical of misuse of agriculture lands, fencing off migratory areas for large animals, and dropping property values due to adjacent solar arrays.

A solar array in Bly covering 40 acres on the former site of a Weyerhaeuser industrial site was built in 2016, and for a time was the largest solar array in the state of Oregon. New proposed solar sites in Lake County will cover thousands of acres.

Solar panels align on the grounds of the Lake County Fairgrounds in Lakeview. Multiple solar projects being proposed would make Lake County unrivaled in the state of Oregon for solar renewable energy production, but the plans have critics.

One of many small solar project sites in Lake County that have sprung up in the past few years. As new solar projects are being proposed, the solar sites are drawing concern from residents critical of misuse of agriculture lands, fencing off migratory areas for large animals, and dropping property values due to adjacent solar arrays.

Now, a new industry has its eyes firmly set on altering the landscape.

Oregon’s third largest county is where cows drastically out-number humans, kids learn to ride a horse before they can walk, and multi-generational family ranches and farms dominate the local economy. However, solar panel arrays are growing, and more are in the proposed stages, marking a sea-change in regional economic interest.

Two new massive projects under consideration will make it the state’s leader in solar renewable energy. One project to be located northwest of Christmas Valley by Obsidian Renewables will cover 7,000 acres, while the Blue Marmot Solar Energy Facility near Lakeview will span 5,000 acres.

The largest solar site in Oregon covers 320 acres near Prineville. Prior to it, a former Weyerhaeuser site in Bly was the largest covering approximately 40 acres — built by Obsidian Renewables in 2016.

Renewable energy projects are not new to the area. Lakeview for the past decade has developed geothermal wells providing heating to the local prison, hospital and school district. Smaller solar panel projects have emerged pock-marking farm fields, adjacent country roads and the fairgrounds.

The largest operational solar site in Lake County is Black Cap, a 70-acre array overlooking Lakeview that will soon be outdone by a 137-acre project.

The rush to build has sparked interest in new industries targeting the area to take advantage of cheap renewable energy, including a new commercial marijuana corporation and the Red Rock Biofuels facility — a $330 million project to convert forest bi-products into jet fuel. Potentially, 130 high-paying full-time jobs are coming. But not all are happy with the proposed projects.

Projects not without critics

The Obsidian Renewables project is in an area renowned for growing some of the world’s best alfalfa hay. A 60-acre site is already in operation in the region and at least seven more are in development.

The site has drawn criticism from the Oregon Mule Deer Foundation (MDF), which lobbied the Oregon Department of Energy (ODOE) concerning loss of wildlife habitat. The proposed site, between Christmas Valley and Fort Rock, is considered key wildlife habitat for migratory animals that might be cut off from vital food sources due to the facility’s eight-foot barbed wire fencing.

“Based on preliminary review of the Oregon Department of Fish and Wildlife (ODFW) big game range maps, the facility is outside of the winter range for mule deer and pronghorn, but entirely within the area mapped as elk winter range,” stated Obsidian Renewables’ application.

“Applicant will be working with ODFW and ODOE to develop a mitigation plan for impact to elk winter range caused by installing a fence around the site boundary.”

“It is our understanding this project would remove 7,000 acres from available habitat in the area for wildlife,” stated a letter submitted by Ken Hand, MDF regional director. “This would cause loss of food sources, cover and travel corridors for all wildlife, and as result we expect to see a decline in the local mule deer population.”

While migratory species impact is the primary source of objection to the Obsidian Renewables site, the Blue Marmot location just north of Lakeview has drawn several criticisms. The 5,170-acre site, unlike Obsidian Renewables’ 7,000-contingent acres, is a compilation of five land parcels, three of which are zoned as high-value agriculture lands.

“Lake County has some of the strongest solar resources in the state, and within Lake County, the Lakeview area has the best opportunities to connect to the electric grid and make use of transmission capacity that connects energy supply with energy demand,” said Blair Matocha, spokesperson for EDP Renewables.

“The Blue Marmot project is expected to have a generating capacity of up to 60 megawatts (MW) with the total acreage of solar arrays still to be determined based on project layout and design. Oregon’s demand for solar energy is expected to grow and additional transmission capacity could be made available in the future through upgrades to the transmission system.”

The project is intended to connect with Pacificorp’s current transmission line network, which constrains the project to 60 MW, according to Matocha. It is expected to begin operations by 2020.

While construction projects on this scale generate short-term booms, as was experienced in Lakeview when the Ruby Natural Gas Pipeline was constructed, the long-term job prospects are minimal. EDP Renewables anticipates as many as 200 workers during construction, but once operational it would create only up to four full-time jobs.

The project is expected to generate around $350,000 in annual revenue for the county under a PILOT program, but detractors don’t see the economic benefit outweighing loss of agricultural lands and environmental impact.

“Part of the interest is precedent, as Lake County has more solar facilities than anywhere else (in the state),” said Amanda O’Bryan, proprietor of Shamrock Ranch. “The county openly welcomed the Ruby Pipeline, they welcomed geothermal. They are looking at precedent that the county is really for it, because in some places solar is fought hard.”

O’Bryan, who created a Lake County Solar Facebook group to coordinate opposition, noted her complaints go beyond a “not in my backyard” mentality, even though it would literally be the view from her porch.

O’Bryan believes the site violates state law regarding exclusive farm use zones by utilizing high-value agriculture zoned lands, and piece-mealing the acreage across multiple parcels as one large project rather than five separate sites an attempt to seek state approval rather than county — which she believes would be denied locally.

She also cited property value loss from being adjacent to solar arrays, protected migratory waterfowl that utilize the area, winter grazing lands for wildlife, and water irrigation rights that would be lost and could dramatically affect land use after the solar project is eventually removed.

“The county is looking at it as income, it’s quick and easy money short-term, but long-term they are changing the rules on how income is paid out for the tax base and it will be insignificant to the county budget,” said O’Bryan.

“The ODOE director confirmed to me that Blue Marmot is a precedent-setting project for solar on Ag lands, if approved it could affect solar projects around the country.”

“Blue Marmot has consulted with and is working with the state agencies charged with protecting environmental resources to design the project in a way that seeks to avoid, minimize and mitigate impacts to these resources,” said Matocha. “The Blue Marmot project looks forward to continuing to explore ways to mitigate impacts to agricultural opportunities and productivities in the area.”

A site certification application was submitted in January, and a public Notice of Intent (NOI) in February. As of April 16 it was requested to temporarily suspend review of the NOI pending submission of an amended NOI at a later date. Issuance of the Project Order by ODOE is also temporarily suspended.

In February U.S. Sens. Jeff Merkley and Ron Wyden announced $40 million in loans would be distributed through the Rural Energy for America Program (REAP), most going towards facilities in Lakeview, Dairy, Malin and Merrill. Additional REAP solar loans in Oregon are slated for Redmond, Boring and Canby.

“Where do property rights stand when they come at the expense of state law and the land, wildlife, and violate the property rights of neighbors?” asked O’Bryan. “These sites diminish personal property rights and lower property values of every adjacent property.”