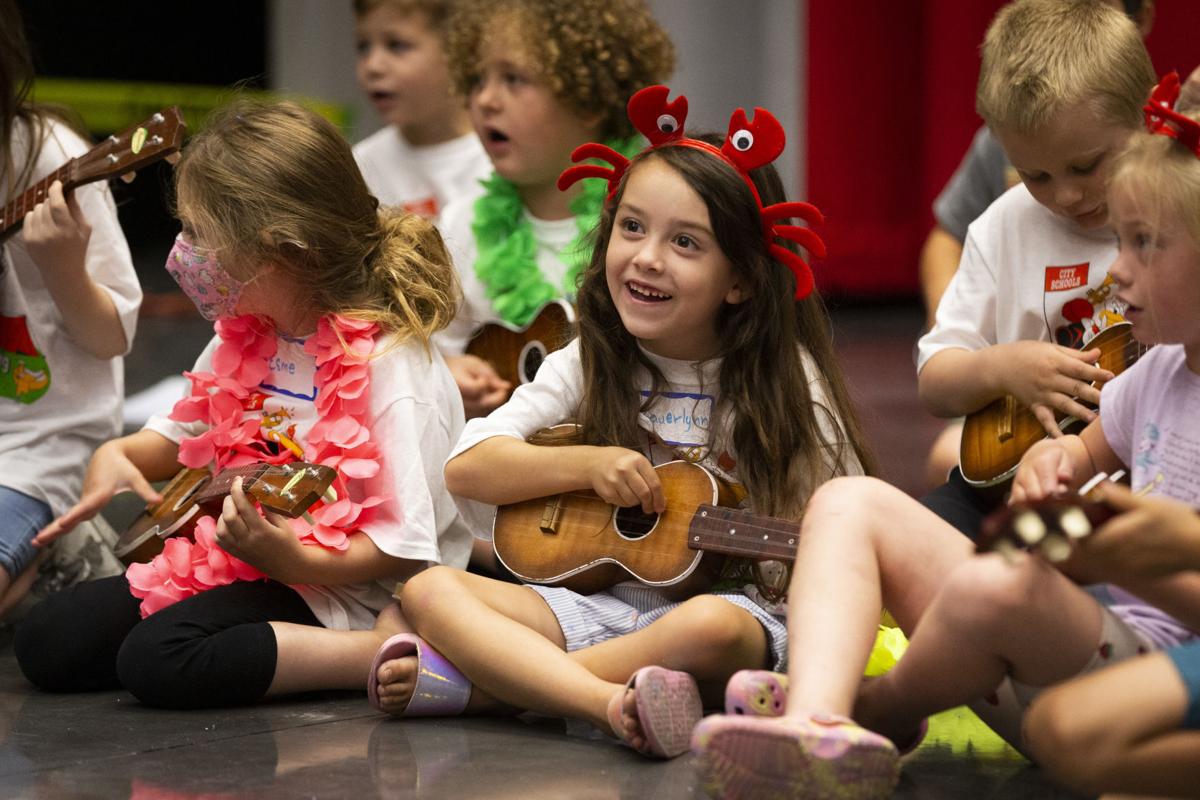 Bauerlynn Sears plays her ukulele in the final concert on Saturday, concluding her experience in the Ukulele in the Park enrichment program, an Adventures in Learning summer camp. The program was moved inside to Klamath Union High School because of the smoke covering Klamath Falls. 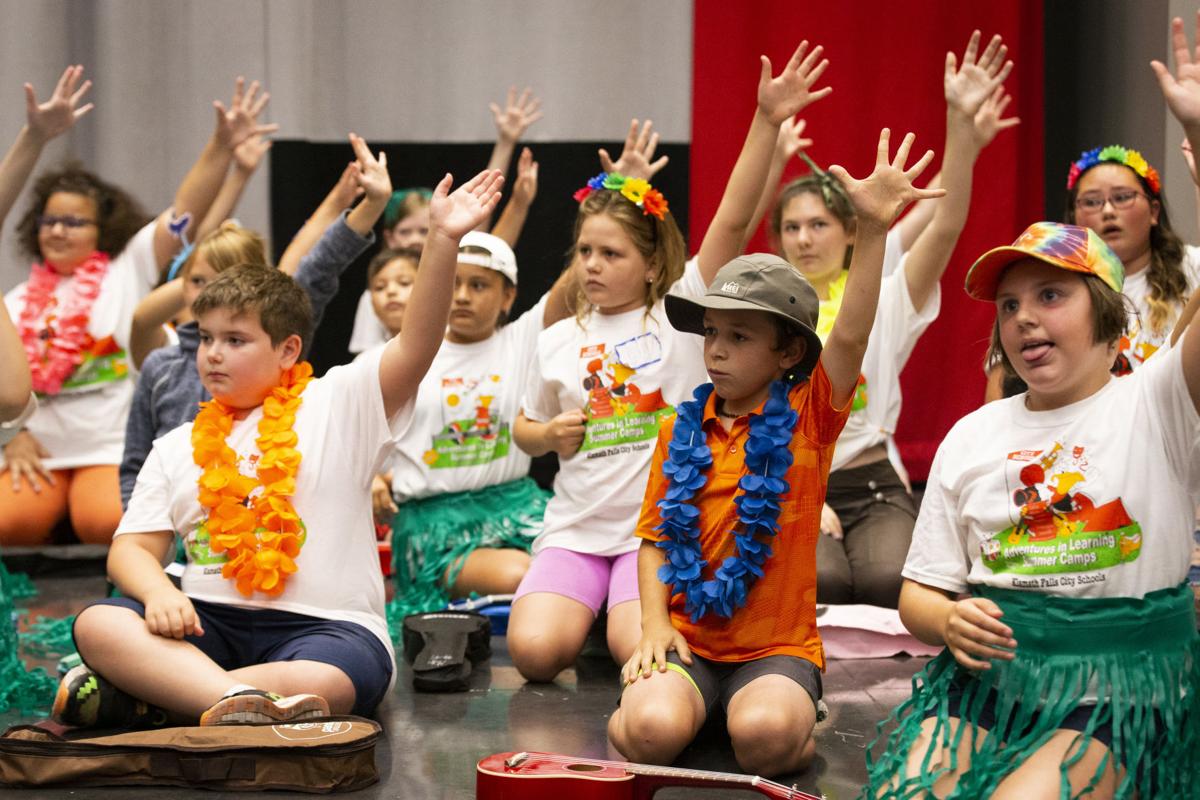 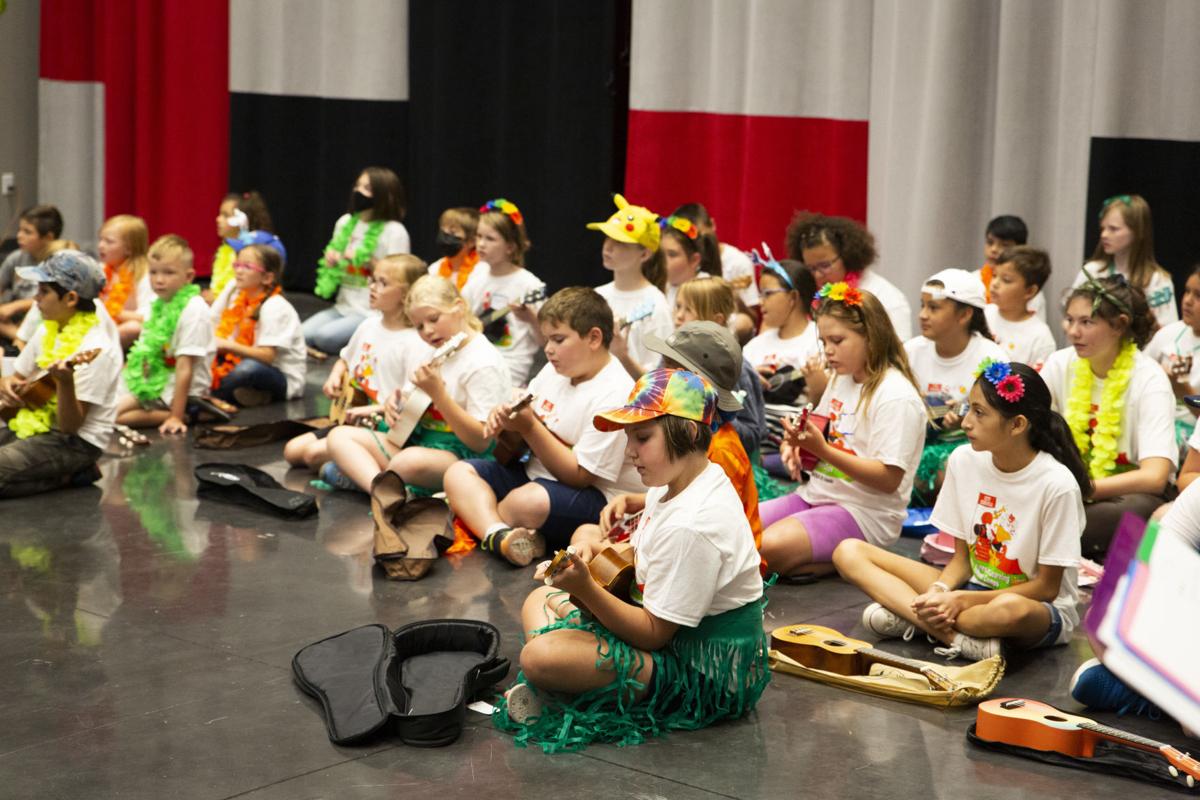 Students play their ukuleles in their final concert on Saturday.

Bauerlynn Sears plays her ukulele in the final concert on Saturday, concluding her experience in the Ukulele in the Park enrichment program, an Adventures in Learning summer camp. The program was moved inside to Klamath Union High School because of the smoke covering Klamath Falls.

Students play their ukuleles in their final concert on Saturday.

But it didn’t change the reason they were getting together.

“We’re really trying to bring the community of musicianship back together,” said Kayla McPherson, the elementary music coordinator for Klamath Falls City Schools. “Kids have been so isolated, and the one gift that music always gives, even during a normal year, is a sense of community.”

So when a legion of lei and grass skirt-wearing students picked up their ukuleles last Saturday inside a Klamath Union High School auditorium — as opposed to the originally planned outdoor, downtown park — that “sense of community” was more than clear. Smiling parents filled the auditorium, snapping photos while their kids waved, danced and plucked their ukuleles.

The strumming students were in the Ukelele in the Park enrichment program, just one of the many Adventures in Learning summer camps being offered by Klamath Falls City Schools this year.

The classes began in mid-June and will continue until Aug. 20. Some classes are still available at http://www.kfalls.k12.or.us.

The district leveraged extra federal and state funds to offer students 45 free camps — many of which teaching skills not taught in a traditional classroom, said Gayle Yamasaki, the summer school co-coordinator. The goal is to enroll at least a thousand unique students, Yamasaki said.

Some courses offer enrichment and credit recovery in the typical subjects like math and English, while others teach cheerleading, soccer, bike repair, backpacking and film.

The middle and high school students in Dan Stearns’ digital media course got a mini boot camp in video editing as they worked to film and recreate an Indiana Jones trailer. In another Klamath Union room, some students worked behind the camera while others donned props and mimicked stalking artifacts in an ancient temple before a large green screen.

“I really want to go and be a film major,” said Jenae Rhine, a rising ninth grader at KU. “So this would be a lot of good experience for me to learn editing and acting and being in front of actual cameras.”

Adelyn Morehouse, another rising ninth grader, said she enjoyed just being around other students, adding that enrolling in summer classes that she liked, enabled her to find other students “that are kind of like you.”

The majority of the camps were proposed and planned by district staff, Yamasaki said. Community organizations were also given ample opportunity to get involved.

McPherson’s ukulele camp wouldn’t have been possible without wide support from a variety of community partners. The camp’s genesis began in the pandemic, as the stringed ukuleles were deemed a safe option compared to other more high-risk activities like singing or dancing.

“Students would not be allowed to share any instrument,” McPherson said. “So I only had about 24 ukuleles, which normally is a healthy class set, but in this circumstance, it still didn’t allow me to teach it.”

McPherson took her class on a virtual field trip to A Music Store on Main Street. While there, she and Yamasaki drew together a plan with store owners Brian Signal and George Tyson, to allow donors to buy discounted ukuleles for the district.

“It became a huge fundraiser,” McPherson said. “They sold ukuleles to any donors at a discounted price. And now I have 75 ukuleles.”

During the school year, those ukuleles enabled McPherson to teach roving ukulele units. During the summer, they came in handy for the dozens of campers who picked up the instruments.

Everyone who attended the class also got a $10 gift card to A Music Store on Main Street. Integral Youth Services provided a free lunch for campers and their siblings and the city was ready to help host the camp at Klamath Commons Park before smoke drove campers indoors.