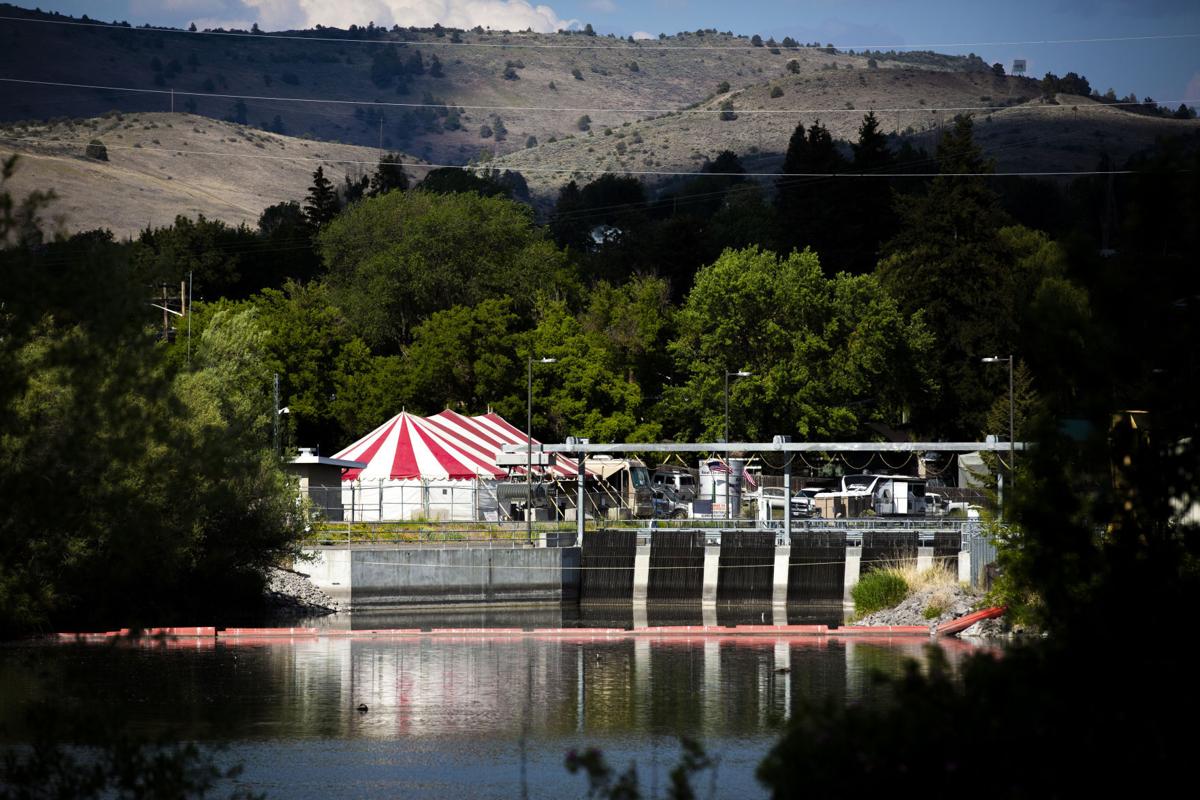 The Water crisis info center tent sits next to the A Canal headgates on Wednesday, June 2 in Klamath Falls. 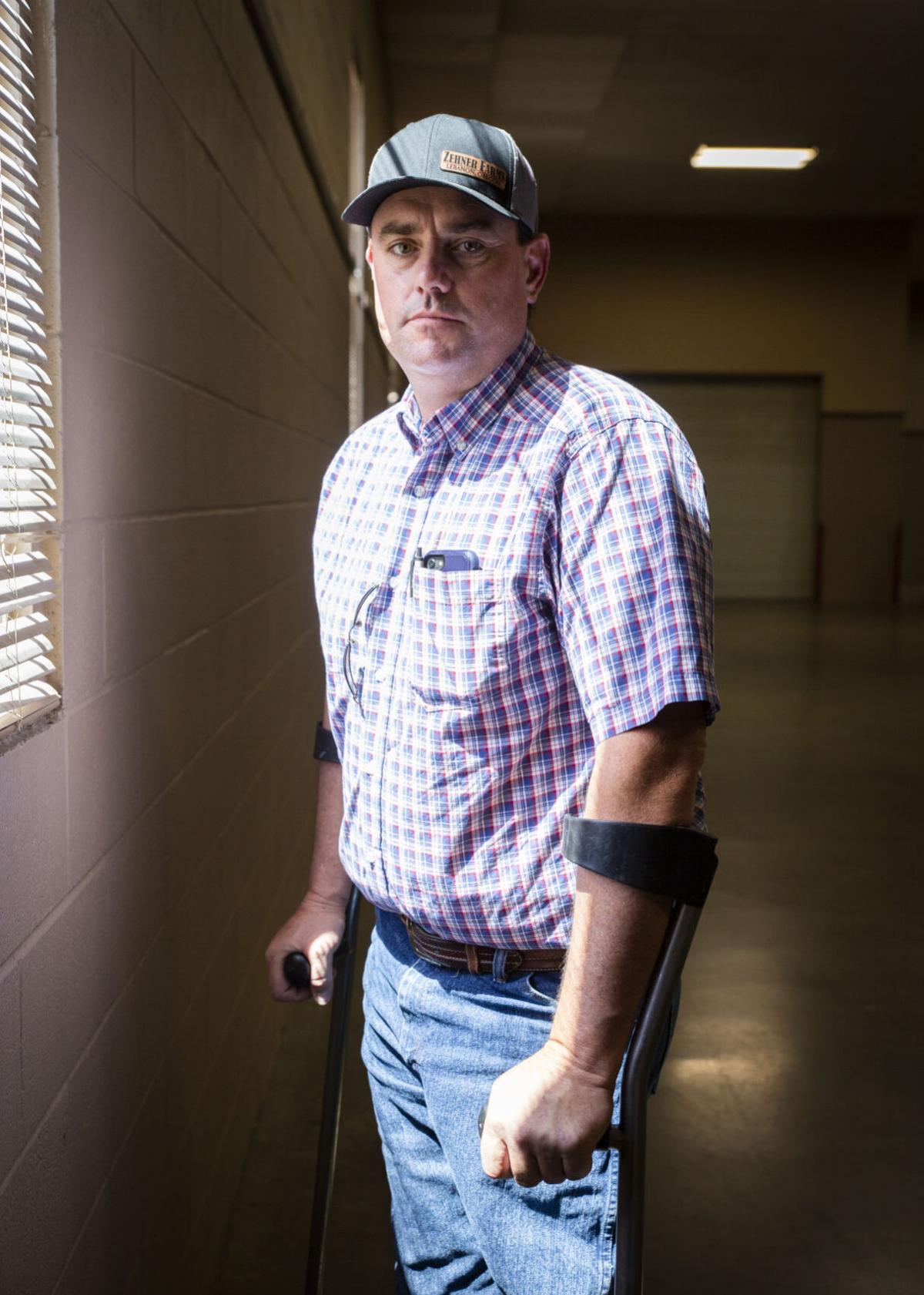 A group affiliated with People’s Rights Oregon’s has made clear their intentions to forcibly open the headgates of the Klamath Project.

But many irrigators say the protesters don’t represent a majority of people who actually use the water that is being fought over.

The People’s Rights Group has set up a red-and-white striped tent directly adjacent to the federal property containing the headgates, on land purchased for $30,000 by irrigators Grant Knoll and Dan Nielsen. The “water crisis info center” has hosted People’s Rights meetings and speakers, including the organization’s Oregon state assistant BJ Soper.

Soper made his appearance last Thursday night to a crowd of roughly 100 people, encouraging them to take back property he said the federal government unconstitutionally took from them. Notably absent were the farmers in the Project whose rights to water he was discussing.

“You see how many farmers are here? I could count them all on one hand,” Nielsen said.

Nielsen owns 43 acres in the Klamath Project, while Knoll owns 100 (about 650 of his other acreage is outside the Project, mostly along the eastern shore of Upper Klamath Lake).

When asked why the gathering didn’t seem to have support from more irrigators, Soper said people have been conditioned not to object to the actions of the federal government.

Scott Seus, who owns Seus Family Farms in Tulelake, isn’t so sure about that.

“I think it says a lot that nobody showed up,” he said. “I think that people are cautious to grab hold of that.”

Though most irrigators agree that the Bureau of Reclamation isn’t managing water properly in the Klamath Basin, they disagree on what to do about it.

Some feel the science behind lake level and river flow requirements needs to be reassessed, some think courts should clear up who’s entitled to the water in Upper Klamath Lake, and many support a basin-wide settlement that would divide water after negotiations between tribes, irrigators and environmental advocates.

Klamath Water Users Association President Ben DuVal, who farms in Tulelake, said while he appreciates the enthusiasm and attention being brought to the basin’s water crisis and supports peaceful protests, the majority of irrigators in the Klamath Project don’t support the actions those at the headgates said they will take.

“I implore my fellow citizens to remain peaceful. There’s nothing to gain through violence or property destruction, and it would reflect poorly on our community,” DuVal said.

DuVal said there are legal issues that still need to be resolved concerning who has a right to the stored water in Upper Klamath Lake.

Irrigators argue that the Bureau of Reclamation has used stored water in previous years to satisfy Endangered Species Act requirements in the lake and river, and that they don’t have the authority to do so. Currently, federal law is mostly on the tribes’ side, while court cases in Oregon have favored irrigators. But the dueling legal opinions have yet to be consolidated by a judge.

“We have a right to that water, but there’s also other needs for that water that have federal laws (behind them),” DuVal said. “Right now (others are) kind of holding all the cards.”

Beyond the complicated legal atmosphere, DuVal said illegal behavior jeopardizes the ability for communities on the ground to come together and forge a lasting settlement.

“We’re trying to get somewhere here and they’re interfering. It’s frustrating,” he said. “I enjoy sitting down and having a meal with some of the tribal members. I respect their communities and really feel that working with them is important — it’s got to happen.”

Knoll said he feels differently. He didn’t support the Klamath Basin Restoration Agreement, the basin-wide settlement that stakeholders worked on for more than a decade but failed in Congress in 2016. He said he wouldn’t support future settlement efforts, either. He believes a court should clarify the legal issue surrounding stored water, and that water should be delivered to the Project until a final decision is made.

Seus agreed with DuVal that an ugly situation between the headgate demonstrators and the federal government would reflect poorly on the Klamath Basin.

“We don’t want that headline for our community,” Seus said. “The repercussions for all that are ours for years to come. It’s the proverbial turd in a punchbowl.”

Seus said he feels for the people in that tent who are locals, and he understands why they’re up there. It has been a tough 20 years for irrigators in the Klamath Basin. But he drew a line at those who came from outside the basin to participate in the demonstrations.

“I believe it’s bringing people in that are there on principles and not because they have a stake in the game,” he said. “It wouldn’t matter if it was here or Malheur — it’s their private property rights battle.”

Seus also said opening the canal probably wouldn’t improve conditions in the Project’s fields, beyond reducing groundwater consumption. Most farmers have planned to go without surface water this summer.

“We have checked the boxes and made sure that we’re able to prove that we’re gonna have enough of a reliable source of water, or that we’re willing to take a certain amount of risk to produce that crop — or we wouldn’t have put it in the ground,” Seus said.

Seus said a settlement is necessary because searching for an answer from the courts hasn’t worked. But its viewpoints like those in the tent that pose a barrier to a wider compromise.

“My side is to try to make my farm, the community and the refuges survive, and sometimes that means you’ve got to sit down across the table from people that you don’t agree with and find common ground,” he said. “I hope that cooler heads prevail on this and that we can all be adults.”

Klamath County Commissioner Donnie Boyd said the situation highlights a divide in the agricultural community that wasn’t there in 2001, when the Bucket Brigade protested against the second-worst irrigation curtailment in the Project’s history and enjoyed broad support among farmers and ranchers.

Knoll agreed, adding that some water users are apprehensive of bringing in outside interests like the Bundys.

“The farming community is highly fractured. Basically, you say the name Ammon Bundy or any of that stuff, the fear goes out. People don’t show up,” he said.

DuVal expressed concern about the potential for outside instigators like Bundy.

“He doesn’t live here, he doesn’t farm here, he’s not looking at dry fields every day. It’s those of us who are affected whose message needs to be heard,” he said.

Tricia Hill, a farmer with Gold Dust & Walker Farms, which spans more than 13,000 acres across the Upper Basin (including more than 7,000 in around 8 irrigation districts within the Project), said she’s glad some people in the community have time to spread awareness and peacefully protest. But she’s concerned that illegal action would go against the values of Klamath agriculture.

“It’s the rest of it that makes me worried. The folks that I know and farm with, that’s not where they’re at. They respect public property and they don’t believe that we should resort to violence,” Hill said.

Hill chalked it up to grief people are feeling this year, which they may express in different ways. But she said having violent action be the face of the agricultural community in the Klamath Basin would reinforce negative stereotypes about farmers and rural communities that she doesn’t feel represent the majority of Project irrigators.

“We’re smart, active, knowledgeable people who want to find a solution,” she said. “It seems like the idea of violence is pretty counter to that.”

Back at the tent, Soper said he thinks farmers are at the end of their rope and don’t have a solution to the water problem. Hill disagreed, adding that she doesn’t think opening the headgates will actually produce a meaningful supply of surface water for farmers.

“All of the people that I know that are in this community are some of the most independent, tough-minded, outspoken, hard-working folks that I can imagine,” she said. “We’re a pretty proactive bunch of folks that look at things long-term, and I don’t see how breaking open the canal is a long-term fix to anything.”