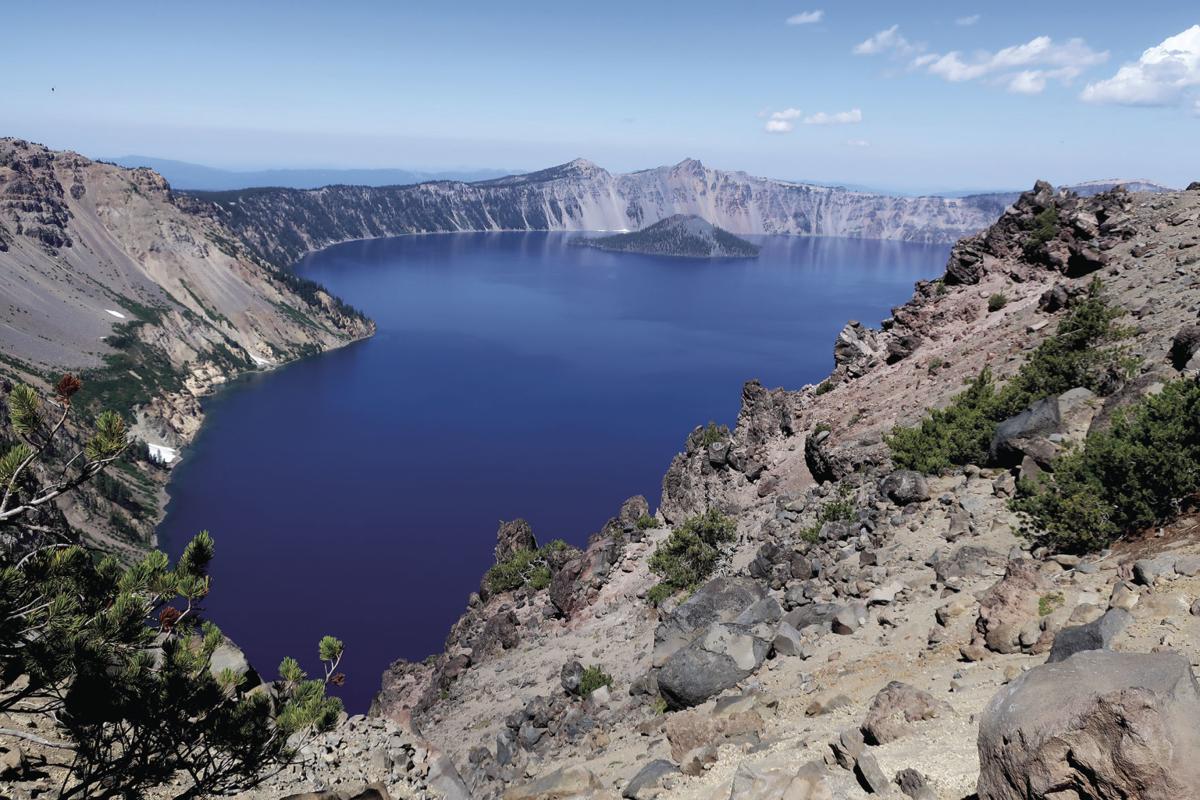 Crater Lake seemingly takes on an odd shape from a Dutton Ridge vantage. 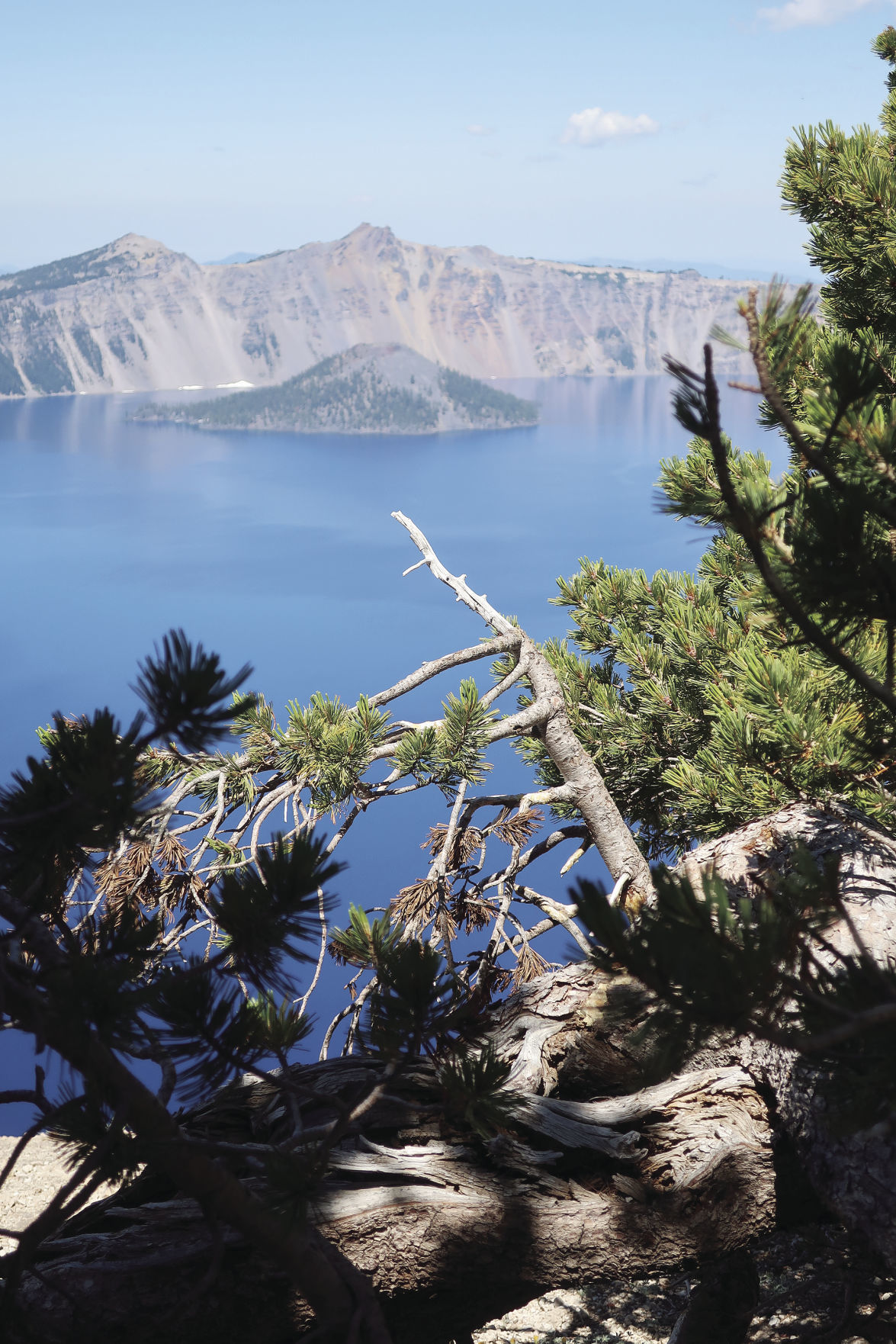 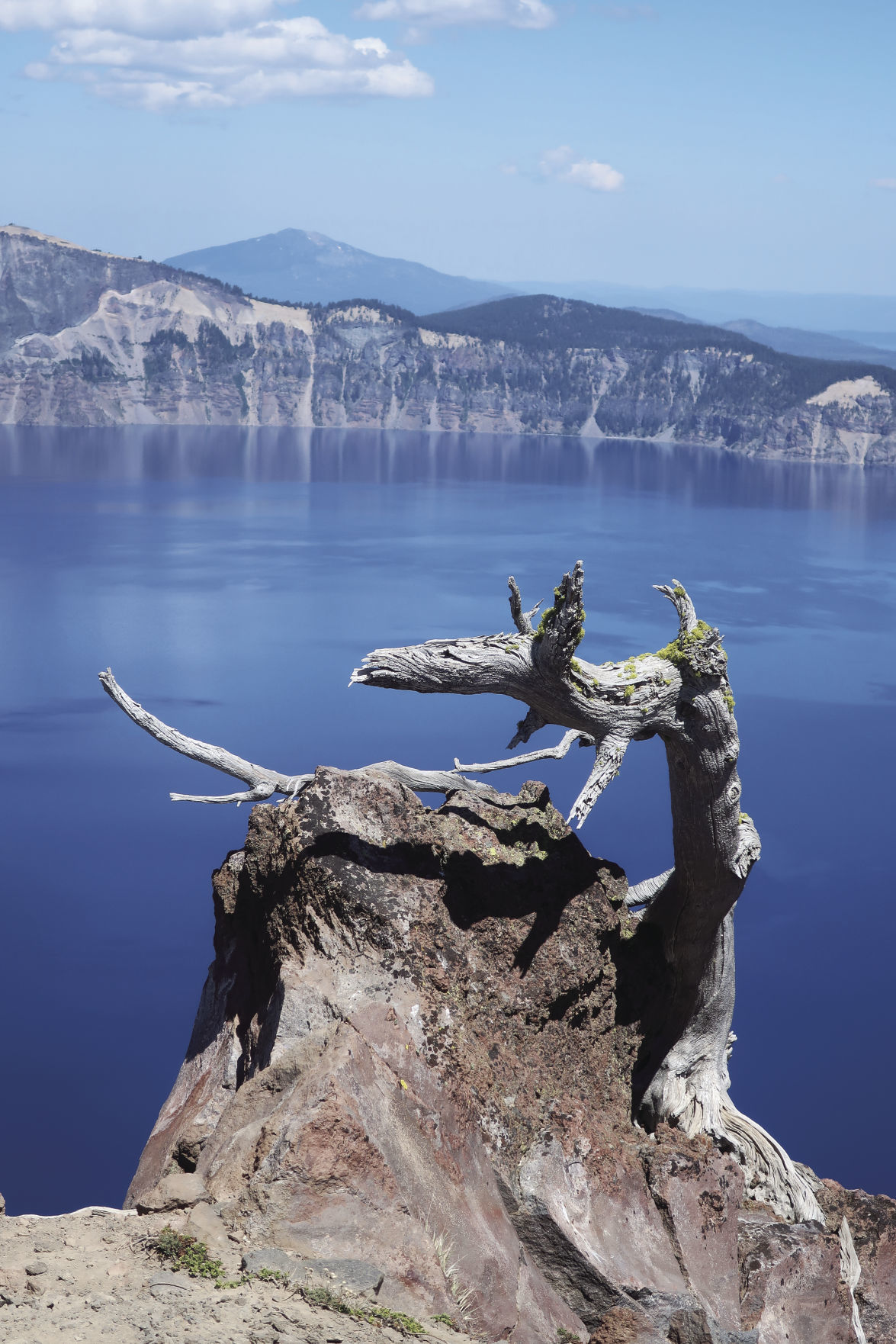 Remnants of a whitebark pine in the shape of a mythic stick figure seems to guard Crater Lake from its perch on Dutton Ridge. 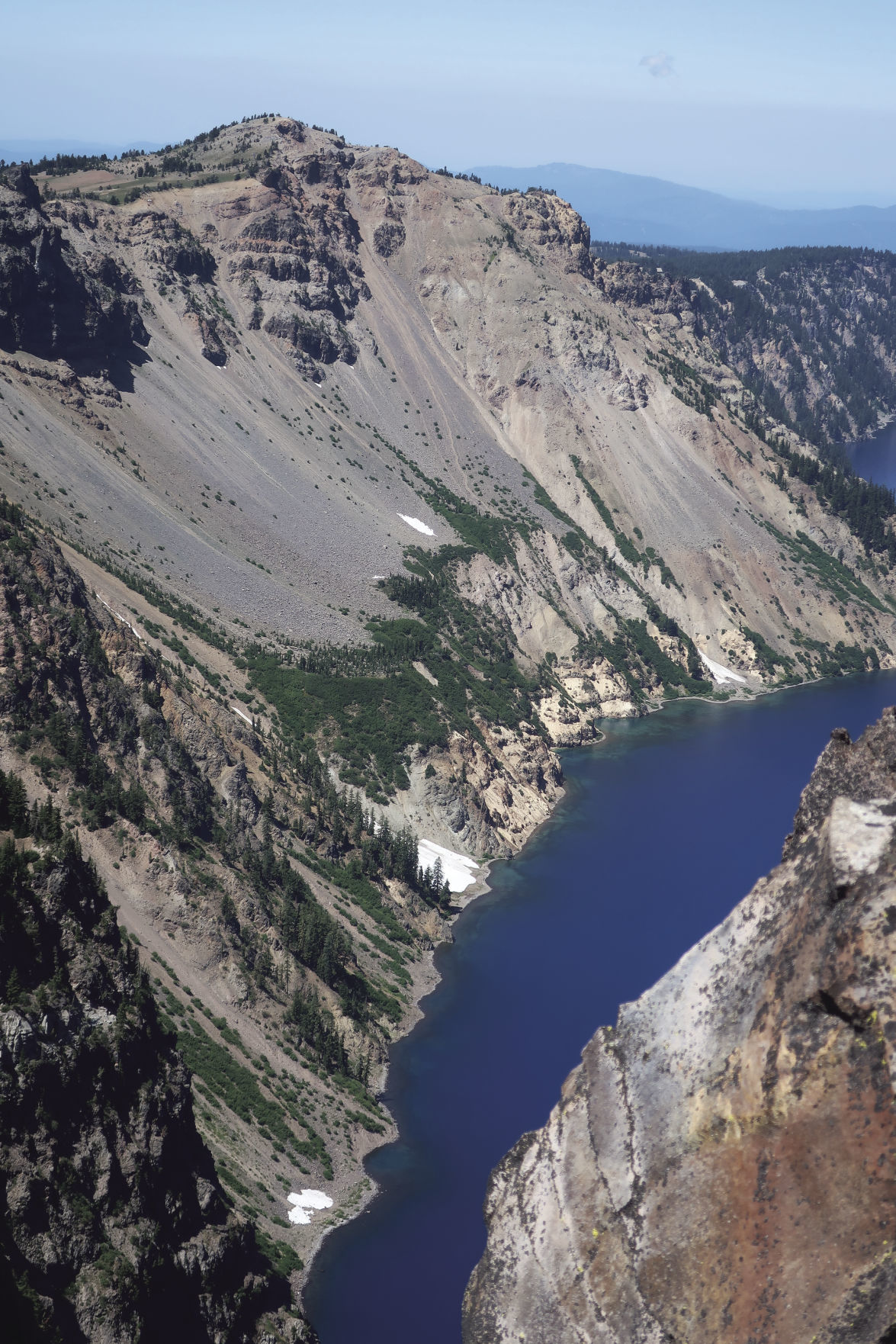 Crater Lake appears like a river from spots along Dutton Ridge. 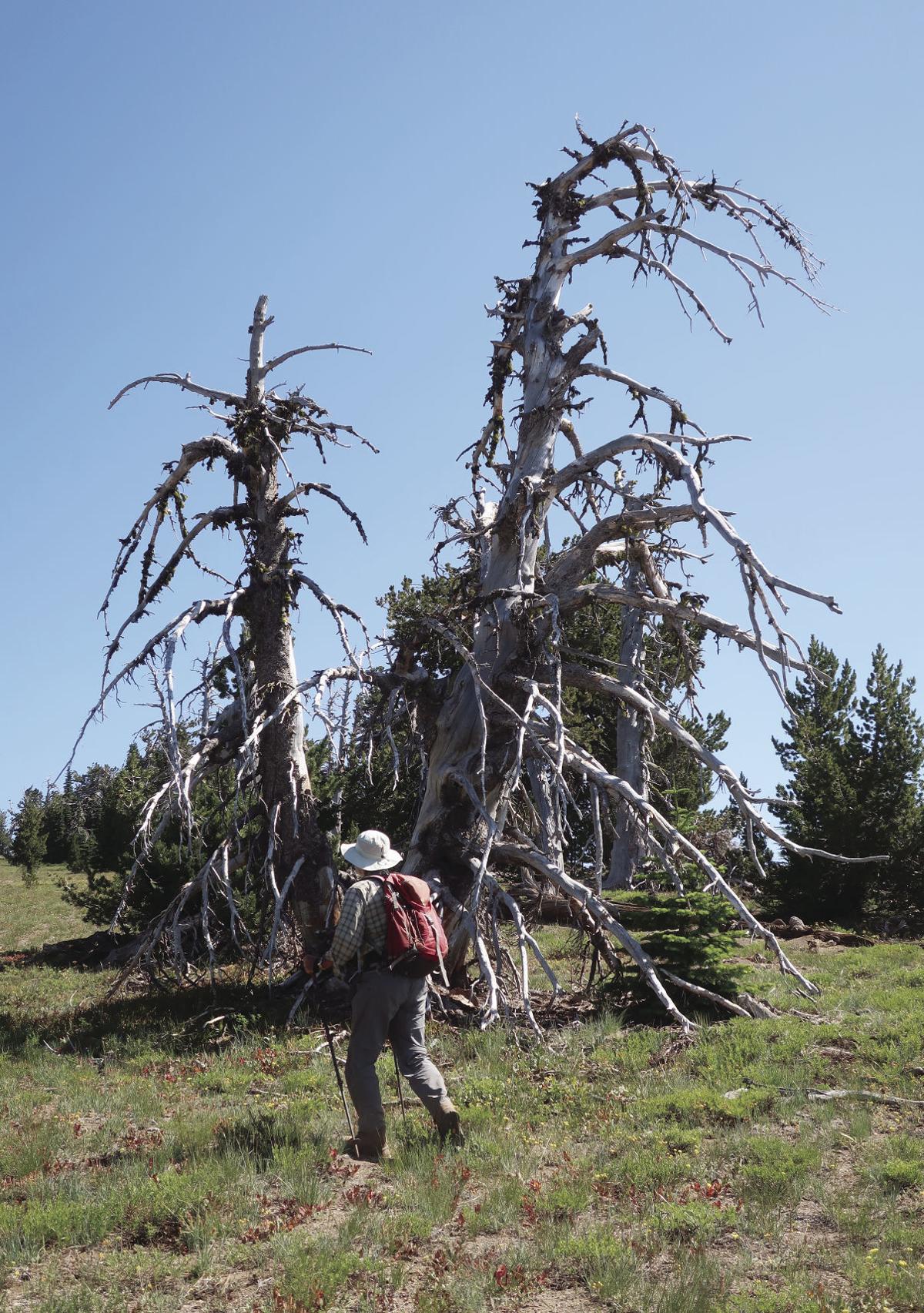 Crater Lake seemingly takes on an odd shape from a Dutton Ridge vantage.

Remnants of a whitebark pine in the shape of a mythic stick figure seems to guard Crater Lake from its perch on Dutton Ridge.

Crater Lake appears like a river from spots along Dutton Ridge.

CRATER LAKE NATIONAL PARK — Crater Lake is a place I’ve visited hundreds of times from a variety of vantages, some along and inside the rim and its caldera walls, some from Wizard Island, and others from tour and research boats while cruising the lake.

But the views along Dutton Ridge and Dutton Cliff were different and unexpected — like seeing an old friend for the first time. It’s a different perspective, one that’s both ominously dangerous and tempestuously beautiful.

We had parked at a wide pullout off East Rim Drive about 1-1/2 miles southeast of the Sun Notch Trailhead. From there it had been an easy but persistently uphill hike to Dutton Peak. No trails lead to Dutton Ridge and Peak, although we saw tracks in the soggy, sponge-like sandy terrain. Sometimes, my hiking partner Bill Van Moorhem and I wished we’d brought snowshoes.

Our cross country route aimed mostly due north, passing occasional stands of healthy whitebark pine and, sometimes, groups of others that were dead and wickedly twisted. In some areas, the often open, sandy landscape was colored with faint red paintbrush (possibly Cobwebby) and Shasta and cushion buckwheat.

Bill’s car and Rim Drive disappeared from sight as we climbed toward the ridge. As we gained elevation, the panoramic view expanded, with sightings of prominent park mountains — Crater, Union, Applegate, Garfield and Watchman peaks, Llao Rock and Mount Scott. More distant were the snow-covered slopes of Mount Shasta along with Mount McLoughlin and Diamond Peak. Crater Lake, Wizard Island and the Phantom Ship, however, remained hidden, waiting to be seen.

It’s only about an 800-foot elevation gain and 1-1/2 mile walk to Dutton Peak, but at an oxygen deprived starting elevation of 7,400-feet, it’s literally a breathtaking hike.

It was even more breathtaking when we reached and followed the ridgeline overlooking the lake to Dutton Peak. It was a cloudless, windless day and the lake’s oh-so-still waters were even more intense blue than the bright turquoise sky.

Bill and I inhaled the view from Dutton Peak, an elevation of 8,147 feet. Its name honors Army Capt. Clarence E. Dutton, a geologist who led the 1886 U.S. Geologic Survey team that hauled a half-ton boat, the Cleetwood, to Crater Lake’s shores and used piano wires with lead weights to measure the lake’s depth. The team’s estimate of 1,996 feet was only slightly deeper than the since-accepted 1,943-foot measurement.

Ironically, it’s nearly the same distance from Dutton Peak as the distance from the lake’s surface to its deepest point. Aware of the precipitous drop to the lake, we took careful steps following the ridge to a far more dramatic lake overlook. Dramatic because the caldera walls seemed to plummet straight down to the lake nearly 2,000 vertical feet below. Dramatic because the walls are raw, ragged and rough, cluttered with gnarly, knobby rocks and boulders, remnants from the eruptive climatic eruptions that detonated and collapsed Mount Mazama nearly 7,700 years ago.

The contrast behind Crater Lake’s chaotic creation and its ravishing beauty was palpable. At and near Dutton Cliff, the steep walls are fractured, some creased with uniform rills seemingly carved into the lava while other sections are cluttered with randomly strewn, sharp-edged lava protrusions. From some vantages, the lake was semi-hidden, looking like a narrow river or oblong body of water. From our perch, nearby Applegate Peak — which we’ve climbed by hiking cross country from Garfield Peak’s eastern flank — looked like a dangerously non-stop slide that ends in the lake.

While eating our lunches we watched lake tour boats from Cleetwood Cove pass underneath Llao Rock, curl around Wizard Island, then slowly make their way underneath Discovery Point, Rim Village and Garfield Peak to Chaski Bay, where they eventually disappeared from sight. We wondered if they could see us, two tiny ant-sized figures.

It’s possible to scramble further into the caldera to try for that once in a lifetime photo, but a misstep on the slippery slope could easily result in a deathly fall down the wickedly ragged wall. If viewing the lake from Dutton Ridge, please exercise restraint and common sense.

We followed a faint path along the ridge to Dutton Cliff, our day’s final lake vantage point. Our map indicated the Phantom Ship was directly below, but it remained unseen, hidden by a dangerously steep edge that neither of us wanted to test.

The return to Bill’s car was uneventful, with both of us quietly marveling at the views we’d enjoyed. An old friend, Crater Lake, had revealed another incredible surprise.