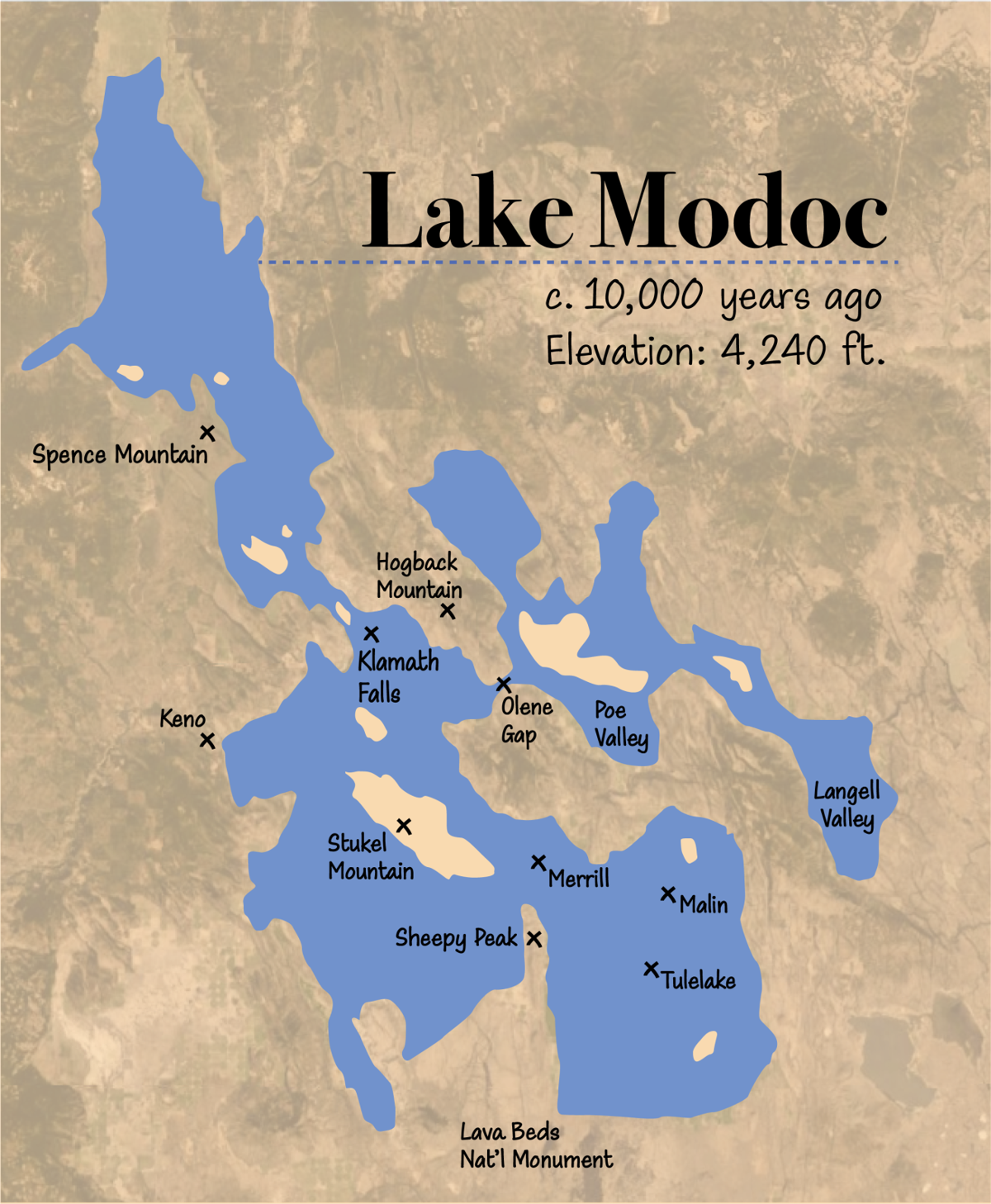 Fed by snow and ice melt from the Cascades and a rainy Pleistocene climate, Lake Modoc spanned nearly 1,100 square miles and filled almost all flat lands in the Klamath Basin. Estimated lake cover by Samuel Dicken. Only a fraction of Lake Modoc's water remains in the basin today, mostly in Upper Klamath Lake and Tule Lake.

Editor’s note: The Klamath Basin’s water issues are ongoing and complex, but examining their history can help stakeholders come up with solutions that work for everyone. This series of stories, which we’re calling “Deep Dive,” will look back on how water and ecosystems in the Klamath Basin naturally existed throughout history — and how human activity affected them. First up: Ancient Lake Modoc.

Around 20 million years ago, North America began to stretch like taffy. The Earth’s crust expanded into what is now the Great Basin, forming thousands of parallel cracks running north to south.

As the stretched crust became thinner, heat from the Earth’s mantle pushed the fractured land upward, and it rose and fell along the small fault lines. This formed a vast network of mountain ranges and valleys called the “basin and range” that stretches from south central Oregon all the way to New Mexico.

About 13 million years later, the oceanic Juan De Fuca Plate slid beneath the North American Plate. The subduction caused the Pacific Northwest coast to buckle upward, and pressure between the two plates forced magma to burst through that fold to form the Cascade volcanoes we see today.

The Cascades cut off the mountains and valleys of the basin and range from moisture that blows off the Pacific. But that didn’t stop water from flowing into what is now the Klamath Basin.

During the last Ice Age, glaciers reached as far south as current-day New York City. While much of Oregon remained uncovered, the glaciers caused a shift in the jet stream that brought consistent heavy rains to the basin and range. Pluvial lakes, whose levels depended on temperature and precipitation, formed throughout the western portion of North America. Basins became pools of water and mountains became islands within them. While glaciers in the northern Midwest were still at work carving the Great Lakes, the West was home to large, plentiful lakes.

The Klamath Basin had its own pluvial lake nestled beneath the Cascades, which provided it with steady inflows of water that the other large lakes lacked. Snow and ice from their peaks melted into the lake, depositing nutrient-rich volcanic sediments on the lake bed.

Lake Modoc spanned nearly 1,100 square miles and covered all the flat lands of the Upper Klamath Basin with nearly 100 feet of water. Uplands like Stukel Mountain, Miller Hill and Hogback Mountain formed islands and peninsulas in the lake. A narrow strait near Olene connected the larger western half of the lake with a network of sheltered bays and inlets in what is now the Swan Lake Basin, Poe Valley, Yonna Basin and Langell Valley.

With deposits in Tule Lake dating back 3 million years, it’s believed that Lake Modoc existed at the end of the Pliocene Era, when global temperatures began to cool and set the stage for the Pleistocene, or Ice Age.

Lava flows from the Medicine Lake Volcano blocked the southern outlet of Lake Modoc through what is now Lava Beds National Monument. Once the lake reached its maximum level, it began slowly eroding a gorge to the west to form the Klamath River, the lake’s only outlet.

Once the last Ice Age ended about 10,000 years ago, glaciers receded and the basin and range became more arid. With less precipitation, Lake Modoc began to shrink. It left behind a landscape of open water and marshes concentrated in Lower Klamath Lake, Tule Lake and Upper Klamath Lake. The next story in this series will explore how water flowed through those systems.