Visitors arrive at Good Duck Park in Merrill Friday morning to tour the recently completed park for an official ribbon-cutting ceremony on Friday. The park is dedicated in memory to Carl Barks, Merrill-born Disney animator famous for creating the Donald Duck comic series and the Ducktales characters. 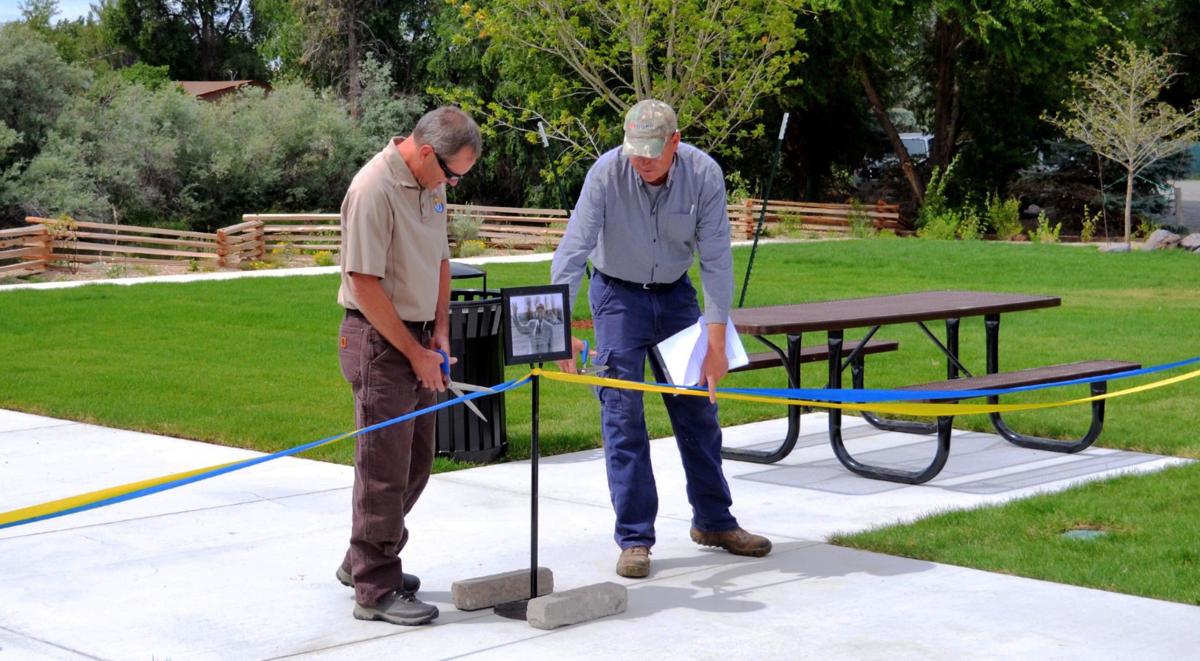 A ribbon cutting ceremony officially opens the recently-built Good Duck Park in Merrill on Friday, with a picture posted of the man the park honors – Carl Barks.

Visitors arrive at Good Duck Park in Merrill Friday morning to tour the recently completed park for an official ribbon-cutting ceremony on Friday. The park is dedicated in memory to Carl Barks, Merrill-born Disney animator famous for creating the Donald Duck comic series and the Ducktales characters.

A ribbon cutting ceremony officially opens the recently-built Good Duck Park in Merrill on Friday, with a picture posted of the man the park honors – Carl Barks.

A ribbon-cutting ceremony was held Friday morning to formally dedicate the new park, which features benches, plant-life, trees and a pristine wildlife viewing area in a tranquil setting sandwiched between Highway 39 and Lost River.

The park includes kiosks noting wildlife and water fowl that can often be seen in the park’s vicinity, as well as detailing the fascinating history of Merrill’s most famous resident, for whom the park is dedicated — Carl Barks, better known as Disney’s Good Duck artist.

Barks has already been honored at the Merrill Historical Museum with an exhibit recognizing his work, but the park offers an opportunity to educate more travelers about the global impact made by Merrill’s prodigal son.

Community leaders hope the park will provide cause for highway travelers to make Merrill a noteworthy stop on their trips through the region beyond a place to gas up and grab snacks.

The park is a collaborative effort several years in the making between the Merrill City Council, Rural Klamath Connects and U.S. Fish and Wildlife, among others. Klamath County Commissioners provided a grant to cover much of the cost for development of a vacant city-owned lot adjacent to Pappy Ganders Restaurant on the southern end of Merrill, while an estimated 1,000 hours of work provided by volunteers and contractors has gone into the park’s development.

Local FFA students participated in the park’s creation by placing native plants that it is hoped will draw certain species to the area, particularly migratory butterflies. The location along the waterfront of Lost River provides a beautiful landscape to watch birds lazily cruise the river in search of morsels.

Three interpretive panels were installed at the park to tell the history of the Lost River, wildlife in the area, and Barks’ life story. Born in 1901, Barks spent his childhood years in Merrill until 1908, discovering a passion for drawing by tracing his favorite newspaper comics.

After several unsuccessful career efforts, including a return to Merrill for a short time, he landed a job with Disney as an animator in 1935.

During his Disney tenure Barks helped develop the fledgling character of Donald Duck from a background character to international superstar.

In 1942, he began work on a Donald Duck comic book, which laid the foundation for a lengthy Disney comic book series in which Barks would create many characters such as Scrooge McDuck, Donald’s rambunctious nephews, and the ancillary characters that comprised the Ducktales stories.

Ducktales would go on to become not only one of the most beloved comic series of all-time, but also one of the most popular kid’s animated shows in history, a movie, and even video games.

Recently, the Ducktales cartoon series was revived by Disney with an all-new voice cast, presenting an artistic style more true to Barks’ comics than the original cartoons in the 1980s.

Barks earned the nickname from fans as “The Good Duck Artist,” noted for his unique artistic style that gave notoriety to his comic books alongside well-written stories of adventure. Today Barks is considered one of the most influential comic artists of the 20th century, his more than 500 comic stories laying the foundation for generations of cartoon and comic artists to follow as well as inspiring iconic tales of adventure such as the Indiana Jones film franchise.

Opening the park’s dedication ceremony were Merrill Mayor Bill Carlson and National Wildlife Refuge Project Leader Greg Austin, addressing a large crowd of visitors and residents. Carlson quipped that often government initiatives and success stories are not aligned, but the completion of Good Duck Park proves that there are exceptions.

Carlson thanked the many individual efforts that helped bring the park to completion, with special gratitude for the extensive efforts of Merrill Public Works Director Greg Mathews, who coordinated much of the effort.

A ribbon-cutting ceremony formally opened the site, with Barks’ picture prominently adorned on the ribbon.

“One of the most exciting parts of public service is getting to see a project come together, this is one of those days,” said Commissioner Kelley Minty-Morris in a prepared statement — unable to attend in person. “Congratulations to the newest addition to your community, the Klamath County Commissioners couldn’t be more pleased to support your efforts.”